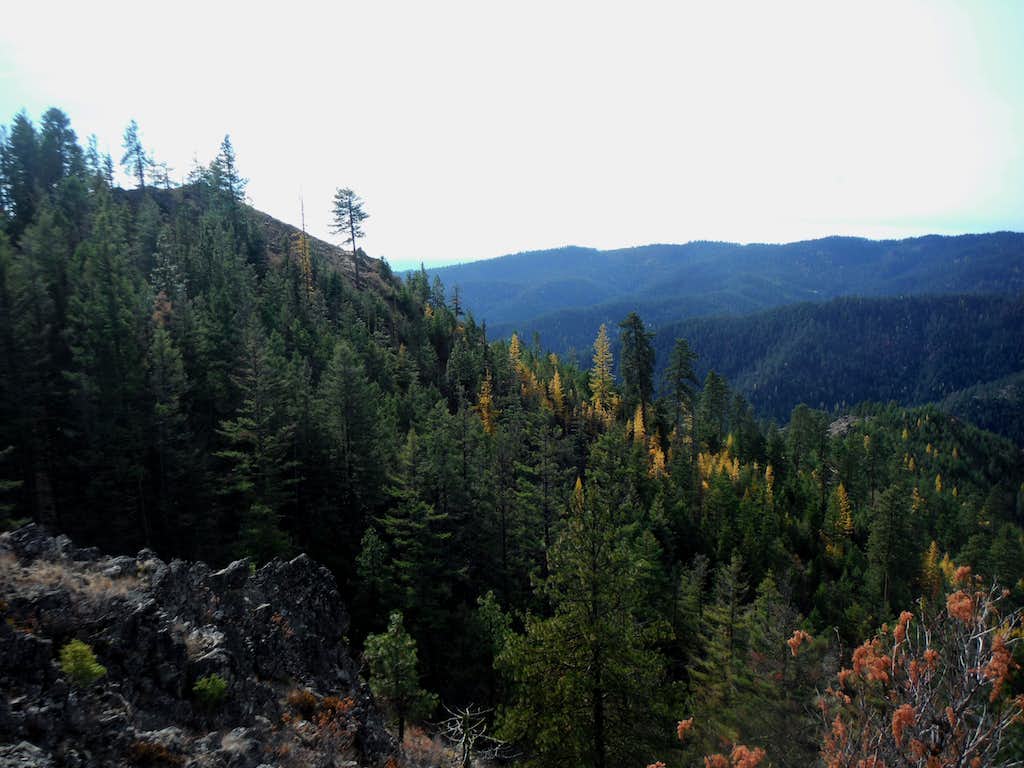 The summit and larch

Swauk Ridge is a little known summit that is located south of Blewett Pass. It is overshadowed by many of its neighbor summit to the north and west. At 4205 feet tall and 405 feet of prominence, this summit is very short compared to nearby Mission Ridge to the east and the Teanaway and Enchantments to the west. Because of the fact that the peak sits far east of the Cascade Crest the precipitation on this summit are tend to be very little making it a good rain-shadow summit. It also sits at a lower elevation so that it make a good snow free summit when peaks in the Teanaway are snow covered. 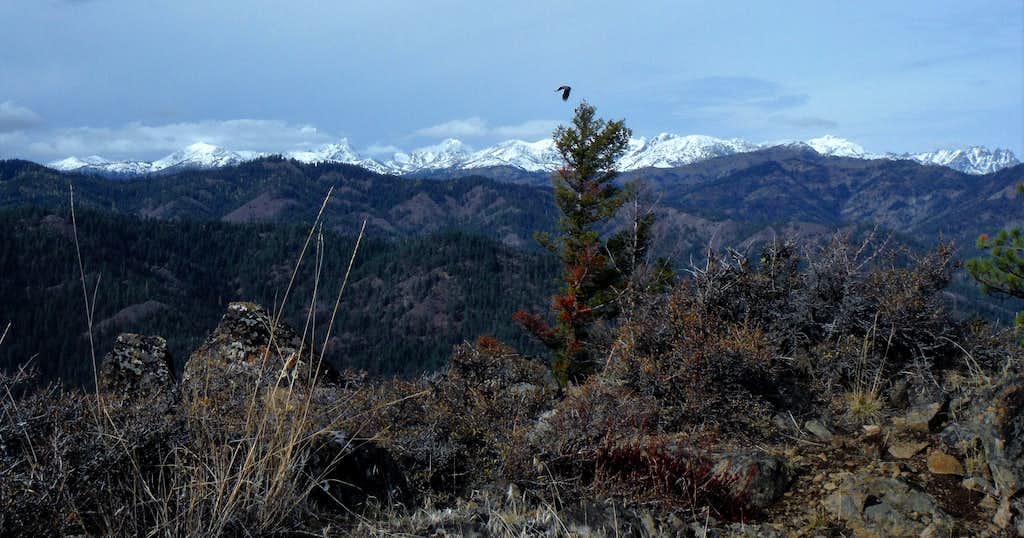 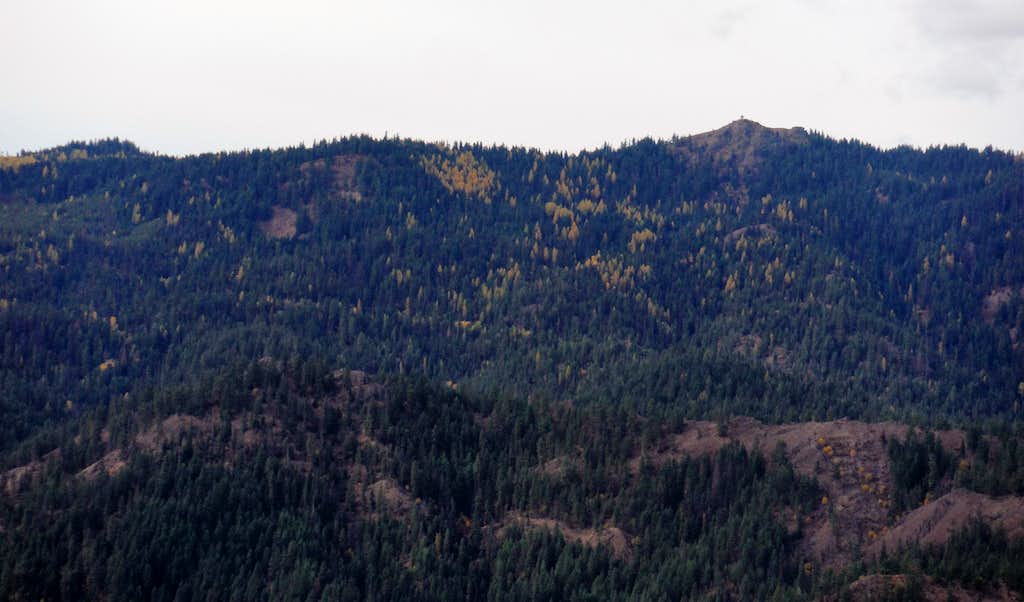 FROM CLE ELUM VIA RIDGE ROUTE: Take Route 97 to Blewett Pass. On the way to Blewett Pass you pass by Mineral Springs Resort. About a mile passed the Resort make a right on Road 9705 and take it all the way up to the highest part (2.5 miles from Highway 97) where you will see an obvious turn-out on your left hand side. 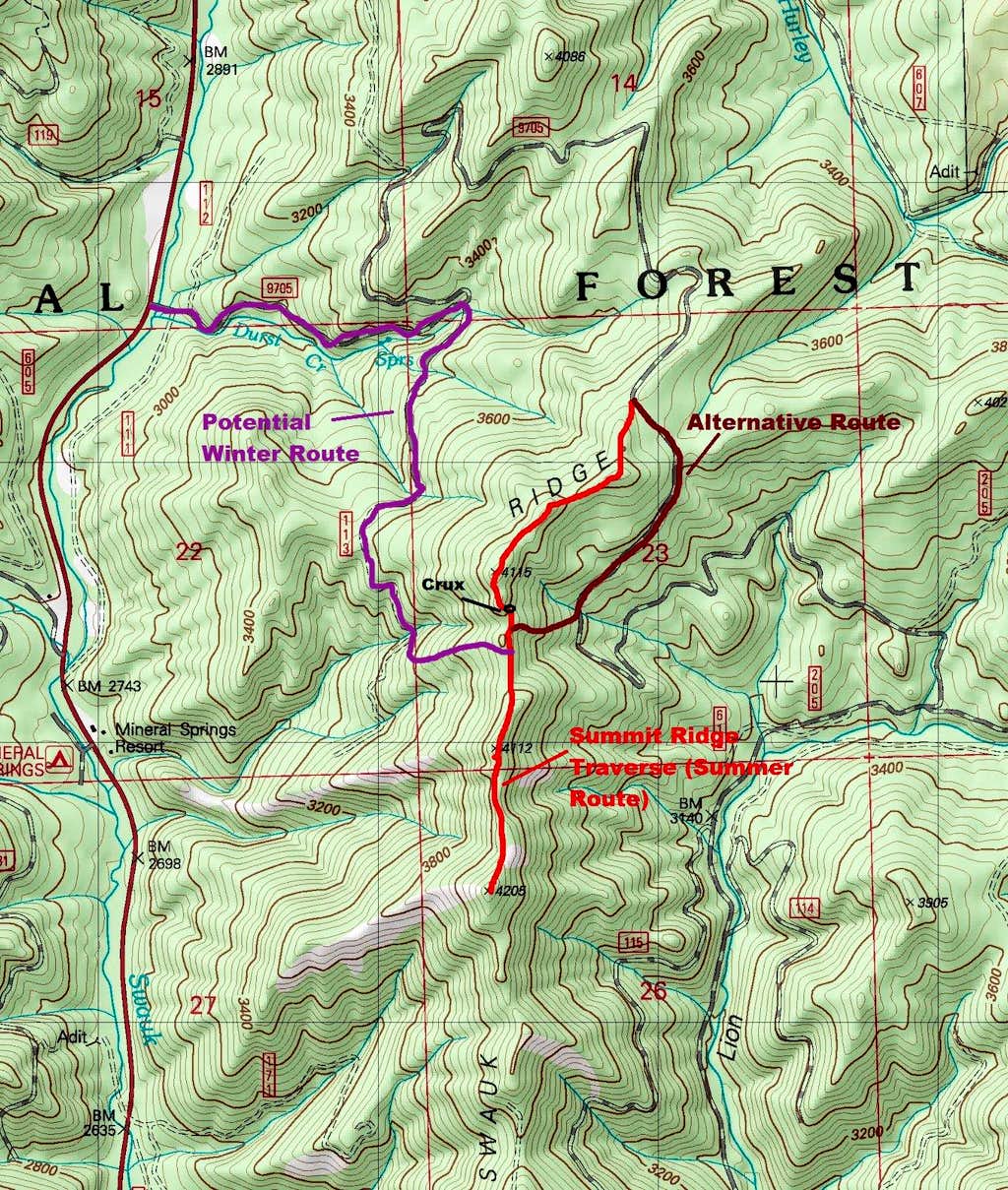 There are a number of routes one can take to the summit. The route described on this page will be the snow free ridge route that traverse the ridge all the way to the true summit. This route has no formal trail and there is some light bushwhacking and scrambling on this route from time to time. There are good views on all of the highpoints along the ridge including the obvious true summit. There is one minor Class 2 section that separates the northern sub-peaks from the south sub-peaks. Though it is not exposed, it is loose and one will need to use caution on this one small section. Other that this 4 mile long 900 feet elevation gain route can easily be done in a couple of hours. 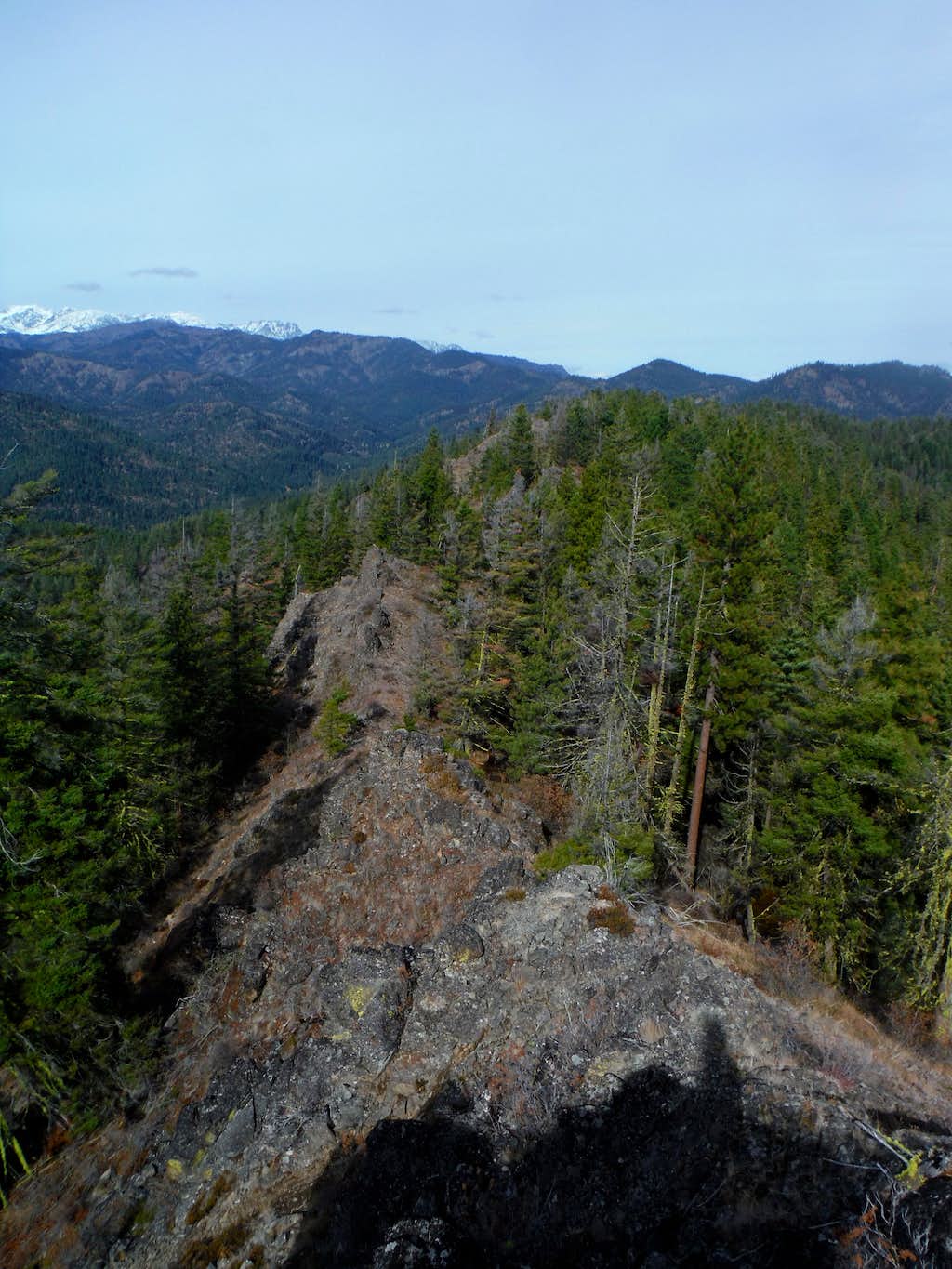 From just north of the summit

On the map will lie other potential routes one can do to summit Swauk Ridge which will include potential winter routes as well.

There are no formal parking passes or fees needed for this mountain. The road does close in winter which is from November to April. During this time it makes for a good snowmobile route or a snowshoe route. 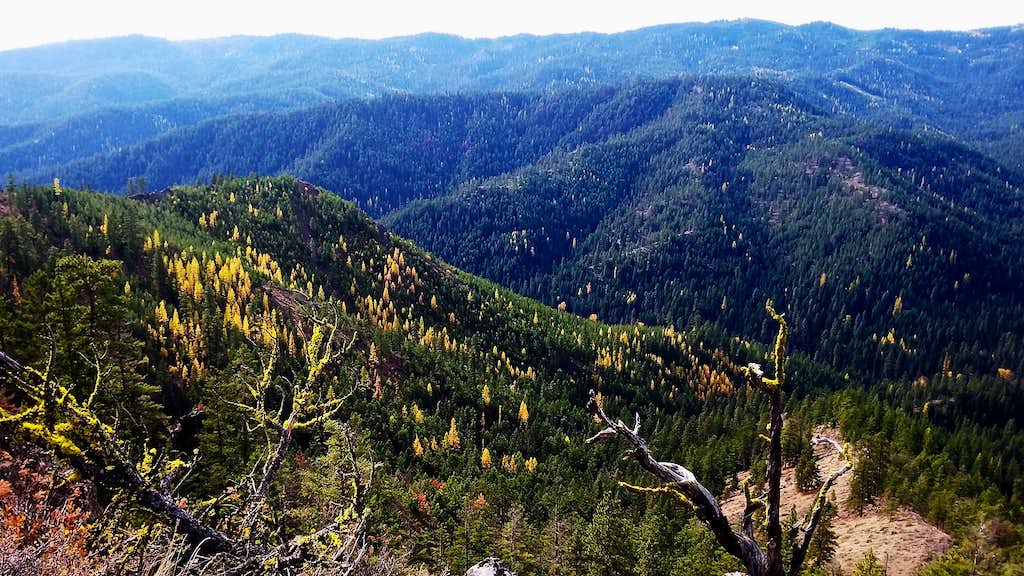 Fall colors
This summit can be hiked at any time.  It is best to avoid the summer when the heat in the region can be at its worse. In fall this peak does have a number of western larches making mid-October a pleasant time to hike to the summit of this mountain. A winter trip up this mountain may also be a rewarding trip. Though the trip would be longer, the views on the summit of all the peaks covered in snoe would make this trip well worthwhile. 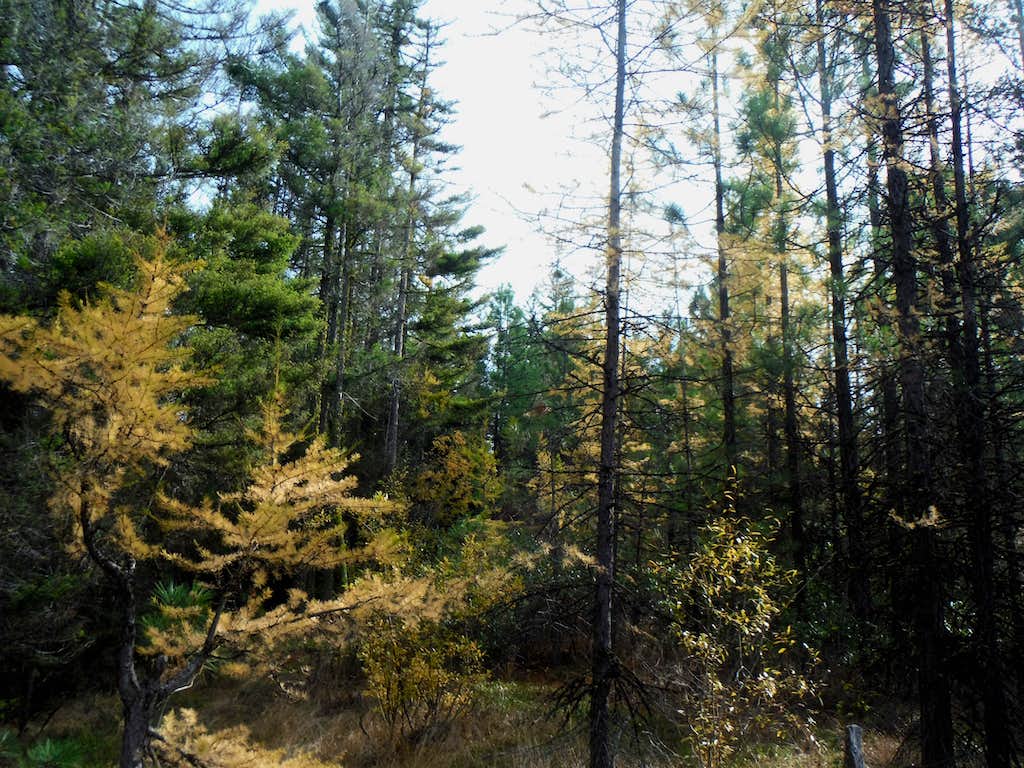 There is a great camping area right on the ridge top off of Forest Road 9705. If that is filled there will be other on the road along the way.