Tahquitz Lookout After a Storm 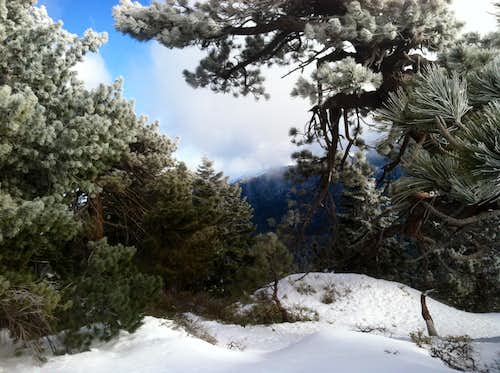 It was early May in Idyllwild. I had left my job at a gear shop near the sunny beaches of San Diego a few weeks ago to work at the climbing shop in town, during the pacific crest trail hiker season. 30 years of outfitting hikers taught me some lessons, namely right around mothers day every year a cold front comes by and the temperatures drop as moisture level rises.

A day or two of this off-and-on drizzlefest brought the daytime high’s in town to the low 40′s. The snow level couldn’t have been much higher than 7,500′, though the clouds above the shop obscured the sharp ridges of the narrow valley where Idyllwild sits. Just as happens every year, a flood of hikers who mailed their rain gear ahead of them to the ‘real’ mountains of the high sierra were stuck in town, soaked to their base layers, unprepared for a tall peak after two weeks of hiking through the desert.

Hikers were stuck wandering between the little boutiques and bistro’s that make the little village a quaint summer getaway for local Southern Californians. Luckily for everyone, Idyllwild makes a great rest day and most were happy to hang out and visit for a few hours while booking rooms in town for showers.

Closing a bit late due to the deluge of happy dirty hippies, I wasn’t too sure I could sneak one quick run in on the hill. I’d been meaning to check out the Tahquitz Lookout, an ancient structure manned during busy summer weekends to keep the tinderbox below safe from errant camp fires and lightning strikes. It shouldn’t take more than two hours, and with the long days there was enough time to be up and out before the sun dropped behind the hill into the desert.

I started at theDevil’s slide trailhead around 7, with a light hoodie and a permit in my back pocket. It was damp, not raining any longer but reminding you that it had been for quite some time. I was working hard to stay warm, alternating hiking up steep terrain and obstacles while running more reasonable slopes. In my head was my high school cross country coach saying “Five quick steps!” as I cresting ridges and short hills. Looking back over fifteen years of running, I’ve found new and special reasons to run – but my roots can’t be ignored, and as the Devils Slide trail joined the larger massif of San Jacinto Peak there was a feeling of flow, just as in a long race or training run.

Just as I was arriving at the saddle junction, two things happened. The forest duff was powdered with 1/2″ of fresh snow, and Two, the clouds hadn’t the muster for the elevation gain and were sitting just inside the Strawberry and Fern Valleys on either side of the Devils Slide.

The trail flattened and I could finally start to motor. Despite being on the PCT in early May I was the only one in sight and my footsteps were fresh tracks on a trail I had to ‘feel’ to know where it went. Running tight along the ridge, as the trail curved East towards the next junction, light started to pop through the taller pines and spill into the valley below. Lit up yellow and coated in white they looked more like Christmas trees than short pines at nine thousand feet. Some snow would spindrift on top of boulders and create taller patches, and I’d scoop up a handful and suck on it like an ice cube. I was careful not to eat too much snow to cool my core, but found little handfuls every few minutes was sufficient.

Suddenly I hit the saddle and banked right, 5 quick steps over the hill, and pounded across the most beautiful scene I had come across on the mountain in the ten years I’d been on it. Just as I was making fresh tracks, I was in a world split in two. I had left the frosted mountain buttresses, their western faces wearing white armor against the clouds buffering the upper ramparts. The yellow sun shone through, though the translucent clouds hid its location, as a general driving his ethereal soldiers on.

Wispy and powerful, frail yet eternal, the western front buffeted against the unbreakable will of the high granite spires. Pines and brush alike were coated white, covered yet holding strong. Again and again the wind drove it’s moisture soaked battallion into the wall, and as the sun waned and began to set low in the Western Sky it’s forces drew back, accepting defeat as the mountains basked in a snow dusted sunset.

I tagged the summit and ran by once more, the mountains having won the battle were washed orange and pink in victory.