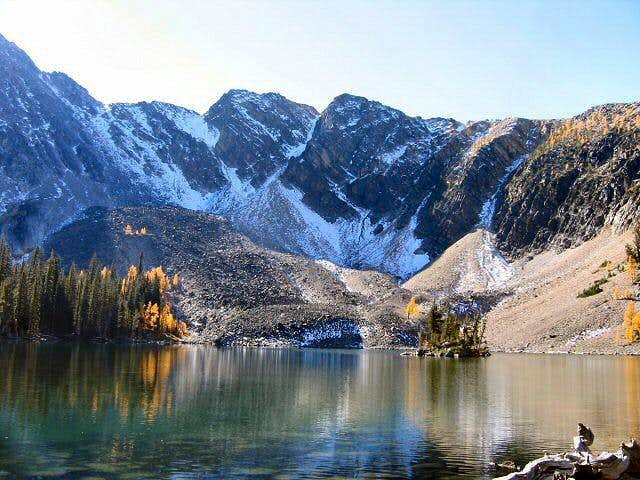 Tamarack Lake, with Warren Peak out of sight to the left. We reached the saddle by climbing the rock glacier (which was quite solid), heading up past the finger of trees maybe a quarter of the way in from the left edge, then avoiding the snow-filled chutes by staying on solid rock—which was a much more interesting climb, anyway! Mostly it was class 3 to the saddle, with maybe one or two short borderline class 4 pitches. A fun climb! As a point of reference, Porter Ridge, which we used on our descent, is the ridge wrapping around to the right; Edith Lake, another well-known entry into this area is directly on the other side of this basin. Photo by Vernon, September 27, 2004.
« PREV NEXT »

Are those subalpine larch (Larix lyallii) or normal larch (Larix occidentalis) growing high up? Heck of a nice picture.

I'm not very knowledgable on this sort of thing, and so can't answer your question on the larch. By whatever name, when they've reached the deep, burnished, gold stage, they are breathtakingly beautiful!

It was a very nice morning, and by late September when we were there, the light had changed enough from mid-summer to be quite dramatic. Thanks for the compliment.

Larch and tamarack are both common names for the same group of trees - all in the genus Larix. Because they are common names, neither larch nor tamarack are right or wrong, but generally tamarack is a term for eastern species in Larix, while larch is a western term for other species of the group. However, in both the west and the east, both common names are used interchangably and are acceptable.

They are in all probability Larix lyallii. L. lyallii and L. occidentalis do hybridize (Carlton Ridge on Lolo Peak has hybrids for an example). However, since these are changing in September (L. occidentalis usually changes later in western Montana), growing at well over 7000 feet in elevation, and since I know there to be quite a bit of L. lyallii in the Pintlers I would guess this is what they are.