When it comes to New Zealand the attention of most climbers and hikers is quite deservedly focused on the South Island and on the Southern Alps in particular. If any attention is lavished on the North Island at all, it’s pretty well restricted to Mount Taranaki/Edgemont and to the Tongariro area. There are, however, many other areas of the North Island worthy of the consideration of the outdoor brigade, my favourite amongst which is the Coromandel peninsula. The base of the peninsula may only be an hour or so from Auckland but you still have to drive a rough and narrow gravel road if you want to get right to the northern tip. A range of rugged heavily forested mountains runs pretty well the whole length of the area from south to north culminating in the high point of Mt Moehau at 892m. Moehau can be climbed but since it is sacred to the Maori, permission must be sought from the Marutuahu and Te Arawa trustees before entering their land.

Logistically, a less complicated endeavour is the hike up the Kauaeranga Valley and an ascent of The Pinnacles (759m) at the head of the valley. A loop hike can be made that enables the visitor to see as much of the area as possible as well as learn about its history. The trip could be undertaken in 7-9 hours from cars but I recommend making an overnighter out of it even if only to enjoy the splendours of DOC’s palatial Pinnacles Hut.

The central North Island location of the Coromandel makes the trip feasible year round. In fact it makes an ideal choice for visitors arriving in early season (September and October) when many of the South Island and higher elevation North Island tracks are still closed by snow.

The Coromandel was the site of Cook’s first landing in New Zealand in 1769 at Mercury Bay on the east coast of the peninsula. The name, however, derives from HMS Coromandel, a warship which visited in 1820, and which was the signal for intensified European settlement of the area. By the 1850’s the value of the kauri tree was well recognized and full-scale logging was soon underway. The gold rush of the 1880’s centred on Thames served to accelerate the demand for locally available, quality timber and this exacerbated the rate of deforestation of the peninsula. As is usually the case in such matters, logging only ceased when the timber effectively ran out and in 1938 the government declared the peninsula a state forest in order to protect what remained. 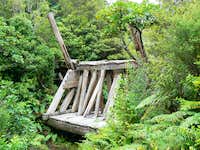 The Dancing Camp kauri dam.
In the intervening period the area has recovered well. The hills are covered in a dense blanket of bracken, giant ferns and scrub with many stands of podocarps and hardwoods including a few remaining pockets of kauri. In particular watch out for the rata tree with its brilliant orange-red flowers and listen for the distinctive and compelling call of the bellbird as you stroll along.

Industrial remains of the logging era are everywhere. The collapsed girders of the trestles that supported the logging tramways, packhorse staircases and, most interesting of all, kauri dams. After the loggers had depleted the easy terrain of its timber, they were forced to work further and further up the ever-steepening river gorges. In order to get the felled timber to market from these more remote areas the river would be dammed at a convenient choke point. Loggers would then fill the resulting reservoir with logs before tripping the dam and watching the whole lot hurtle down to the valley propelled by its own momentum. The restored Dancing Camp Dam is a short walk from the Pinnacles Hut.

The Pinnacles and most of the other similar geological features in the upper valley are the remnants of ancient plug volcanoes. The soft outer shell of these volcanoes has worn away over time leaving behind the hard granitic cores that we see today as isolated pinnacles and towers.

From Auckland travel south on SH1 and then east on SH 2 and 25 to Thames. Just as you pass the welcome sign at the south end of town watch for the Kaueranga Valley Road on the right and follow it 14 km to the DoC visitor centre. The road becomes gravel after the first 5 km or so. Purchase your hut tickets here if you are planning to stay overnight at the Pinnacles Hut. Drive a further 10 km up the valley from the visitor centre to the end of the road. Park in the first (Tarawaere) car park.

If you’re doing this as an overnighter I recommend the following in order to include the Pinnacles summit track with the shorter return leg.

Day 1
From the first car park walk south and wade the Kauaeranga River. If you don’t feel like wading, there is a bridge 5 minutes or less up-river that is used when the river is in flood. Just after the river crossing is a track junction. Take the left hand fork signed “Billy Goat Track”. The track soon begins to climb quite steeply and it’s an hour or so of steady going to a high point of 645m where the views begin to open up. You’re following the route of the old Billy Goat tramline and the remains of the trestles that once crossed the intervening gorges can be visited along the way via minor detours. The way is well benched and graded and you will encounter many stretches of staircases cut directly into the rock for the packhorse trains of yesteryear. After the initial climb the track contours up and down and around the forested ridges, offers superb views and, after a 20 minute descent, arrives at “Hydrocamp” 2.5-3 hours from the car. This is a clearing made by the crews that built a power line corridor across the Coromandel in the 1950’s. Water is available here.
Following a moderate climb out of Hydrocamp it’s mainly downhill to the junction of the track with the sidetrack to the Pinnacles Hut. The hut is 5 minutes from this junction, an easy hour from Hydrocamp and 3.5-4 hours from the car.

Bag your bunk and settle in for the night.

Following recent trail improvements, Pinnacles summit is now only 1-1.5 hours return from the hut. Leave your pack on the verandah of the hut and take just what you need for the short hike to the top.

In 2002 the track was mostly a booted in route that had become quite eroded over the years. This had obviously become a concern to the authorities and there’s now a newly formed track to the scrambling section of the route. The new gravelled path and well built staircases run south and then east and arrive at the interesting bit in about 20-30 minutes from the hut. As the way steepens there are some Class 2 scrambling sections to negotiate as well as two metal ladders but no really serious exposure until you’re right on the summit. The track is well marked and next to impossible to lose.
As well as the improvements to the lower track, DoC has installed metal rungs in the rock on the last section to the summit. I’m a bit ambivalent about these. The scramble to the top was not difficult and, since the choice of where to go at this point is limited, erosion of the route minimal. Frankly, these things are at best an eyesore and at worst the potential source of a compound fracture of a limb were it to get caught in one during the course of even a minor fall.

The views from the summit are superlative. East and west to both coasts of the peninsula, southwest to the Hauraki Plains south of Auckland and north up the rocky spine of the Coromandel. And you no longer have to balance on the tiny summit to take photos (although you still can if you want to) since there’s even a viewing platform installed now.

After you’ve soaked it all in, return to the hut, pick up your pack and head back to Hydrocamp. From the latter take the right hand fork to the Webb Creek Track. This descends steeply at times to an eventual confluence with the Kauaeranga River. On this section you will encounter hundreds of deeply worn packhorse steps in the rock. This is when you discover that a horse’s stride length is different from yours as you miss every other step!

From the confluence the track follows the river all the way back to the road. You exit about 200-300 metres from where you started so it’s about 5 minutes on the road back to the car. The Webb Creek route isn’t half as interesting and scenic as the Billy Goat but it is a good hour shorter. It’s no more than 2-3 hours from the hut to your car.

If you’re day tripping the whole thing – and I’ve done it both ways – I recommend going up the Webb Creek Track and coming down the Billygoat. The old packhorse trail up the Webb is mostly in the forest and consequently, moss covered and slippery. I’d rather go up such stuff than down it. And of course, this shorter approach puts you on the Pinnacles summit in time for lunch.

There is no track fee but there is a $15 pp/pn fee for the Pinnacles Hut. This must be purchased at the Visitor Centre before your hike. In fact, DoC is currently recommending “Hut tickets…be pre-booked through the Kauaeranga Visitor Centre well before your trip”. The permanent hut warden will definitely ask for your ticket. Note also that no other DoC hut tickets can be used for the Pinnacles Hut. If you have any left over from other tramps they can’t be used here.

There are cleared camping platforms near the Dancing Camp Dam 5 minutes below and to the north of the hut. Check at the visitor centre for reservations/fees etc.
After looking a bit weather worn in 2009, the Pinnacles Hut is now clad in aluminium siding and has a new glass "conservatory" directly off the kitchen. It's still the non plus ultra of DoC’s many palatial offerings in New Zealand. Mattresses, propane cook stoves in a well laid out kitchen, solar lights at the flip of a switch, an ablution block and toilets, even a shower (cold water only) all serve to pamper the sweaty, hungry and tired tramper. At the end of the day you can even stretch out on the lovely veranda with a cup of tea and admire the view over the Pinnacles themselves.