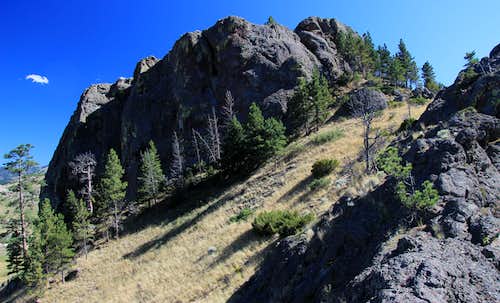 Highpoint
Alongside the Missouri River between Great Falls and Helena is a small spot rich in history and scenic value.

"...an Indian road enters the mountain at the same place with the river on the Stard side and continues along it's border under the steep clifts...At this place there is a large rock of 400 feet high wich stands immediately in the gap which the Missouri makes on it's passage from the mountains... This rock I called the tower. It may be ascended with some difficulty nearly to it's summit and from it there is a most pleasing view of the country we are now about to leave. From it I saw that evening immense herds of buffaloe in the plains below."


Today, you're not going to see vast herds of bison, or any bison at all, and a skilled climber actually can get to the summit that Lewis did not, but a stop here will take one, if he or she can just sideline the interstate right next to this site, into a past without roads and rails.

But even though an interstate highway is adjacent to the park and both the sight and sound of cars and trucks are guaranteed, it's still a mini-wilderness where you may see grazing deer while having to watch underfoot for rattlesnakes.

By the way, the "Indian road" Lewis mentioned was a route that Native Americans had been using for hundreds of years to seek bison and other game and to trade. It was part of a network making up the Old North Trail, which went along the edge of the Rockies from Canada to Mexico.

From this Smithsonian Magazine article:

"Imagine a mountain ridge that snakes like a knobbly spine all the way from the frozen Canadian Arctic down to the deserts of Mexico. 'The Backbone of the World,' the Blackfoot Indians called what we know as the Rocky Mountains and the Continental Divide. Now imagine a footpath that runs along the base of the mountains following the 'shoreline' between the mountains and the plains — twisting through stream gullies, unraveling over low ridges and around buttes running on for 2,000 to 3,000 miles." So writes Peter Stark in July's Smithsonian Magazine. Fragmentary evidence indicates that such a footpath existed, and it is called the Old North Trail. 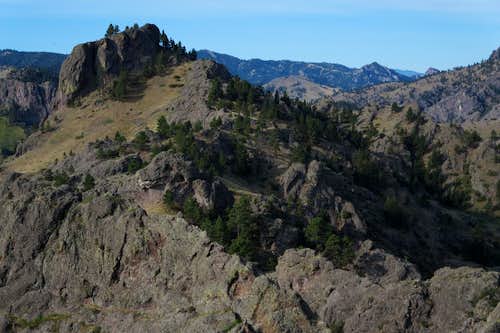 View to the Highpoint

From I-15 in Montana between Great Falls and Helena, take Exit 256. Spot the turnoff for the state park and park in a large parking area. 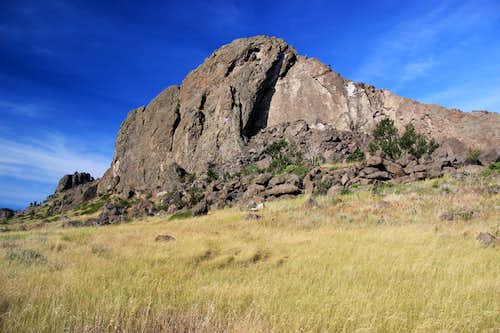 The highpoint is the outcrop farthest from the trailhead, even though closer outcrops look higher.
Although the trailhead sign says the hike is just 0.25 mi, it's longer than that, but not drastically so.
The official trail ends on the main "ridge" after climbing a few hundred feet.

The easiest way to the highpoint, a spot Lewis did not reach, is via an "easy" Class 5 pitch that I free soloed in approach shoes (I would call it 5.2-5.4). Pictures below may help you locate it. While I do not claim to have made the first ascent, I did note (July 30, 2015) that the summit lacked a cairn, register, litter, or any other signs of human presence. My guess is that most people who visit the park for its historical significance aren't too interested in climbing and that most types likely to leave trash or vandalism prefer to exert less effort when it comes to marring the scenery. 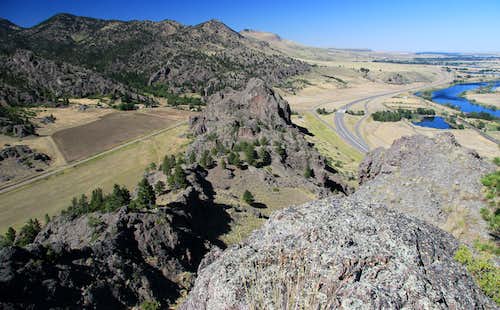 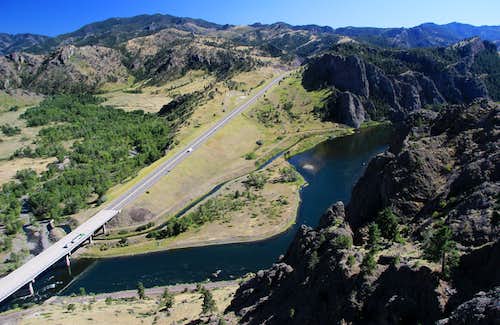 There are several other pinnacles out here, and some are clearly Class 5. While I did observe some leadable lines, I cannot vouch for the rock quality, as much of the rock here is hardened volcanic ash, which usually is horrible in quality. I did find a scrambling route up and back down the high pinnacle that looms above the trailhead; you'll find it starting on the west side of the park, though some harder but more direct ways are visible from the parking lot.

There is a self-pay fee station at the trailhead. As this is a state park, the Interagency Pass will not cover you.

Any season, but winter can be brutally cold and windy.

None at the park. The surrounding area is a mix of public and private land. There are camping and lodging options in the vicinity.