Pakistan is a dreamland for trekkers and hikers. Most of the trekking routes situated in the Mountain Ranges of Karakoram, Western Himalayas, and Hindukush. The best trekking season is between May to end of October each year. 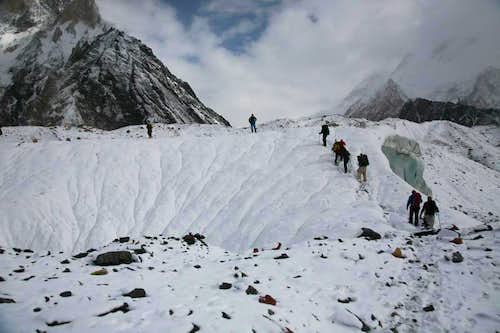 Situated in the heart of the South Asian sub-continent, it is a country with rich history and cultural tradition, captivating in its own right. Pakistan is situated between 24.5 and 36.75 degree north latitude and 61 and 75.5 degree east longitude. It is bordered by China in the North, Afghanistan and Iran in the West and India in the East. Arabian Sea lies to its South with 1000 kilometers long coastline with fascinating beaches. Pakistan is linked with China through land by Karakoram Highway along the great Silk Route while it is linked with India by air, rail and road. Iran and Afghanistan are linked with Pakistan by air and road. 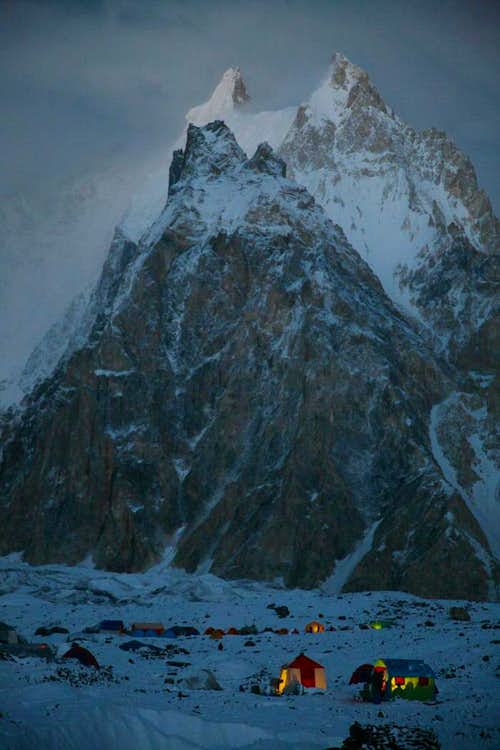 Nature has blessed Pakistan with matchless landscape, the high mountains, longest glaciers on earth outside the Polar Regions, deserts; plains, plateau, and attracting sunny beaches are all found here. However, more than fifty percent of its Northern and North Western regions which possesses the most mesmerizing Mountains Ranges on earth. Splendid remains of continents collision, 65 million years ago, a massive landmass collided with the mainland of Asia to create the South Asian Sub-Continent and push the Himalayas skyward. The mighty ranges, Karakoram, the Himalayas, and the Hindukush make a meet here. 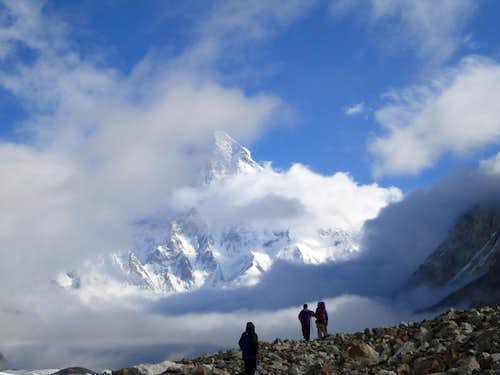 In these great mountain ranges, found the mountains of awe-inspiring heights, longest glaciers on earth outside the Polar Regions, valleys of unsurpassable beauty, dotted with quiet lakes, crystal clear blue water, through with murmuring streams and springs and thundering rivers, above all the mighty river Indus.

The Karakoram Highway and further secondary roads have made it easier and quicker to reach starting points of the treks into the regions. Enjoyable trekking programs ranging from a few days to 40 days can be arranged. Some of smaller routes can also be connected jointly. Numerous treks passes through fierce and rugged scenery, lead over long glaciers and end at the base of a high peak, some of the trekking routes cross high passes, some of which have become technical ascents due to drastic changes in the pattern and movement of glaciers.

Covered accommodations or hotel is not very frequent, but frequently the trekker, hikers have to depend on camping gears. Wood is very limited and oil/gas-burning stove is very important. Air flights operate between, Islamabad-Skardu, Islamabad-Gilgit, and Peshawar-Islamabad-Chitral, subject to clear weather conditions. The roads between these cities are paved. Other secondary roads in the side valleys are rough and dusty, but beautiful. Jeep services are available between one important point and another and they carry passenger too. However, a journey by one of these conveyances is painful. One can also hire special jeeps at the main cities of Gilgit, Hunza, Chitral, Skardu, Khaplu and Shigar. 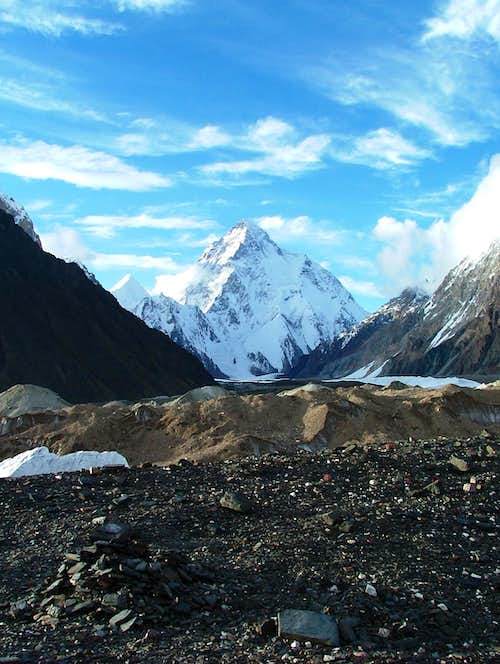 K-2 as seen from Concordia

A massive area of mountain deserts and crumbling rocks, bereft of any vegetation's and lightly populated, exhausted and gouged by fast flowing rivers fed by melting snows, the mighty mountain ranges of Pakistan, the Karakoram, the Western Himalayas and Hindukush, holds the greatest concentration of world’s highest peaks. No less than 4 of 14 Eight thousand meter peaks are situated round the Baltoro Glacier, within the distance 24 kilometers, rise up 10 of the world’s 30 highest peaks, including K-2 (8611m), Gasherbrum-I (8068m), Broad Peak (8047m), and Gasherbrum-II (8035m). One above 8000 meter peak is located in Western Himalaya, the Nanga Parbat (8125m). Baltoro ice stream, 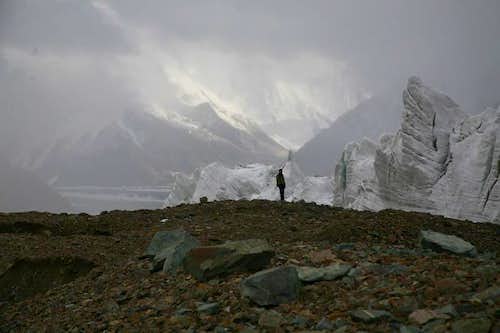 The Ministry of Tourism, Government of Pakistan, has defined trekking as walking below 6000 meters (for the year 2010 it is relaxed up to 6500m) with the purpose of sight-seeing and recreation at various natural and cultural sites in places where means of modern transport are either not available or are purposely not used. It has designated three zones for trekking; Open, restricted and closed. Foreigners may trek anywhere in open zone without a permit and services of licensed mountain guide. For trekking in restricted zone, foreigners must pay a prescribed fee of 50 US$ per person per trek to obtain a trekking permit from Ministry of Tourism, Islamabad. The validity of trekking permit is 30 days. It also requires hiring an approved/licensed mountain guide; buy a personal accident insurance policy for the guide, cook and porters and to attend a mandatory briefing and de-briefing at the Ministry of Tourism, Islamabad, at the beginning and the end of the trekking trip. No trekking is allowed in closed zone which are the areas near Pak-Afghanistan border and near the line of Control with Indian-held-Kashmir. 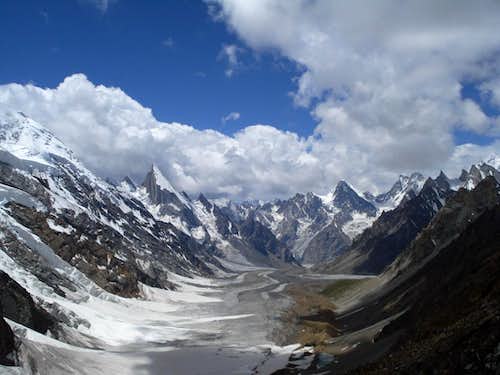 Views from the top of the Gondogoro Pass

For Treks in Baltistan, please visit TREKS IN BALTISTAN 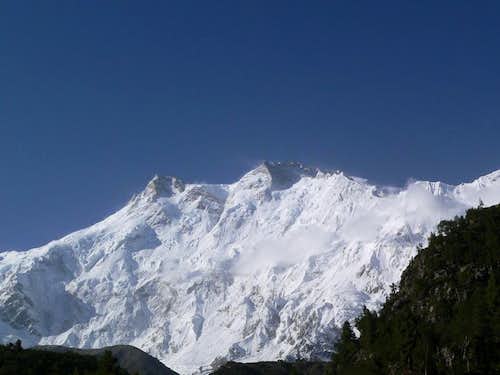 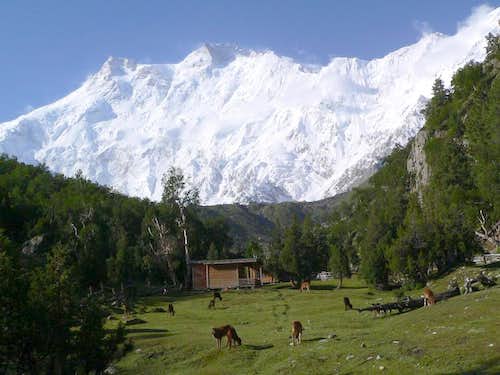 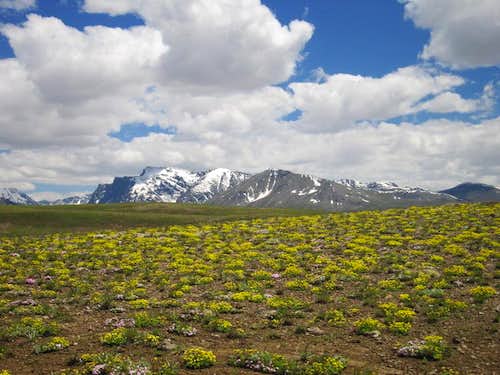 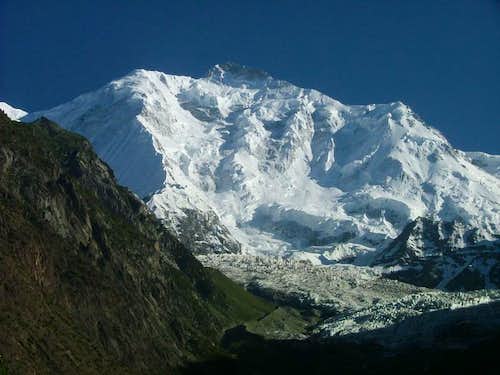 05- CHAPURSAN BATURA:
Gilgit, Sost, Yashkuk by jeep & then by foot to Khunjerab pass & across Lupghar Pass & down to Raminji or cross across 5200-M Pass & down to the Batura Glacier to Passu or vice versa
Restricted Zone

06- BARPU GLACIER:
Gilgit, Hunza, Hopper, across Bualbar Glacier up the Barpu Glacier ascend to Rash Lake,Girgindal, Golden Peak Base Camp, return by let side of the Barpur Glacier to Hopper & to Gilgit or vice versa.
Open Zone 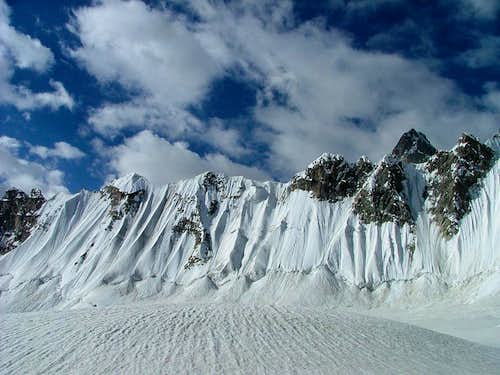 Thanks for this article Afzalji, nice overview, lots of treks to do there! Makes me regret not going further than the Indian Punjab when I was there two years ago...

Thank you very much for your comments and vote. I hope you will visit my beautiful country in near future.
Best regards, Afzal

Always look forwards to your photos and articles. Truly one of the finest areas in the world.

Thank you very much for your nice comments and vote.
Best regards, Afzal

Let's hope to visit your country..
thanks for your article and your pictures!
Ciao Paolo

I appreciate you comments and vote. You are welcome to my beautiful country. Thank you very much! Best regards, Afzal

I also appreciate the information about different regions. Like everyone else, I hope to get there one day.

Thank you very much for your kind words. You are welcome to my beautiful country!
Best regards, Afzal

Afzal, your work is great and indeed shows professionalism photography. I know many will love to visit

Thank you so much! Afzal

Thanks Afzal for the interesting article and wondeful photos. It makes you want to go right on the spot!

Thank you very Johan! I am glad that you like this article and photos! Afzal

Im impressed by your picture collection and information about different kind of passes specially in chitral. Im from chitral .