Often referred to as Oregon’s Indian Creek, the once hidden/secret crags of Trout Creek are probably the best, and certainly the most concentrated, pure crack climbing in the Pacific Northwest. Washington’s natives are sure to compare the area to Vantage, and the two have much in common: the basic geology of their basalt columns, the sustained, plumb-vertical, nature of most of the routes, the distribution of climbs across several aspects, and their misleading names. The river visible from the crag is actually the Deschutes, “Trout Creek” converges with it somewhat farther downstream. The reason the crag is referred to as Trout Creek” is probably its proximity to a campground by the same name.
The major difference between Trout Creek and Vantage however, is the quality of the rock. Broken, crumbling, chossfests abound in Frenchman Coulee and the surrounding cliffs, while the basalt at Trout Creek never even fractures enough to afford a bolted arete like the kind that are so popular at Vantage. This is probably the defining characteristic of Trout Creek: it is 100% traditionally protected. Likely because of its proximity to Smith Rock, the area has long been regarded as a crack climbing training ground, rather than a destination for route development, and most of the crag ethics are built around this. Although nearly all routes must be first led to be top-roped (some can be reached from adjacent routes), most are equipped with bolted anchor chains and steel carabiners to facilitate crack training without the pressure of finishing the route to retrieve gear.
Trout Creek is not a crag to be underestimated. Although the routes typically protect well, the rock is steep and abrasive and on many routes rest stances are nonexistent. Bring plenty of tape, plenty of cams, and a willingness to put your gear placements to the test. 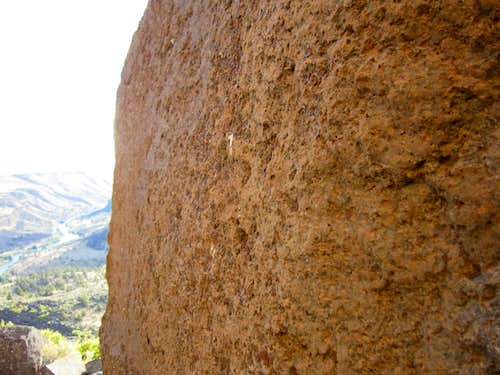 Although the crag is just north of Madras, many will approach from Mt Hood Highway so two sets of directions will be given.

From Portland (i.e Seattle)
Drive south-east on Highway 26 until just past Warm Springs, then take a left on Gumwood Lane. Turn right on Deschutes Drive and then right again on Juniper Lane before descending into Gateway. A left on Clemens Drive will take you to the Trout Creek Campground after a couple miles of washboard gravel.

From Madras (i.e. Bend)
Drive north on Highway 97 and then turn left onto Cora Lane, this merges shortly with NE Clark. Be sure to avoid a deceptive right turn onto Quaale Road and you should arrive in Gateway, at which point the routes merge

Approach from the Campground
From the day-use area at the far end of the campground, hike along the dirt road until you see a small cairn near a gully, the trail should be obvious, but I have walked right by it several times. If you happen to notice a bench to your right facing the river, you are close, if the most visible tilted columns (The Prow of the North End) appear directly above you, you have gone too far. 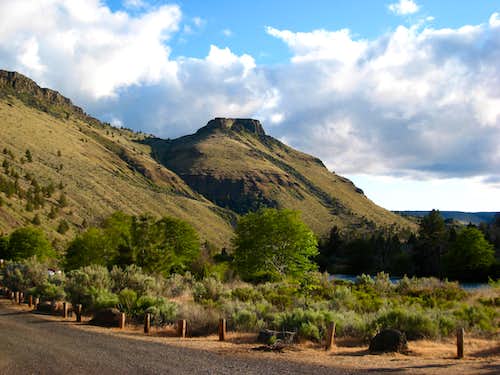 The North End from the campground, trail winds between the ridgeline on the right and the rocky streak.
The trail is a bit steep and rather narrow but not difficult to discern until directly underneath the crag, at which point you have several options. The columns you can see at this point are the North End, if this is your destination pick your way directly to them, but if you are headed for the Main Wall it can be worthwhile to skirt right underneath the boulders and find any number of other ways to the base of the wall.
The high quality basalt pillars have remained shockingly intact as they have fallen, with little of the rubble that characterizes the Frenchman Coulee area, resulting in a jumble of oven to truck sized boulders with some not insubstantial cavities between them. Unless you plan on spelunking keep careful track of your gear. Summitposters seem to be, by and large, fairly proficient scramblers so this warning is less important than it is for the sport climbing crowd, but moving around the base of the North End and the Main Wall is a consistent class 3, and getting to the start of more than a few routes is class 4.
Other areas, such as the Southwest Corner, the Castle Wall and the Cool Wall can reportedly be reached by traversing right after the end of the Main Wall, but as I have not visited these areas I cannot give any more detailed information.

Unfortunately, Trout Creek has more than its fair share of red tape, in addition to a seasonal bird nesting closure that shuts down the crag from January until any time between April and August (depending on whether actual nesting took place), there’s not really any camping outside the established sites, which cost $8 on weekdays and $12 on weekends and are, in late spring and summer, more often then not occupied by fishermen and rafters.
There is also no potable water, but as I can attest, the river water can be drunk either boiled or steripened with no ill-effects. 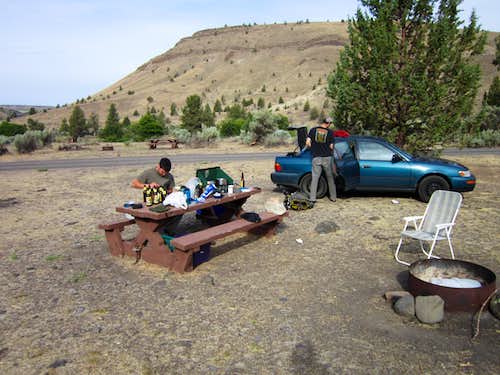 A typical campsite, excepting that it is not occupied by fishermen.

The best conditions can be found on warm, dry, days from late fall to early spring. The Main Wall tends to turn into a bit of a solar panel starting about 1 pm, but even on hot days mornings and evenings can be nice. Additionally, the North End and the Cool Wall are both shady midday. With the recent nesting closures, this season is even more amended, with the only reliable time to visit being September - December.

Main Wall - Every route is a classic, say those who blast 5.11. Lesser mortals quake in fear, and search in vain for the rare 5.9+. Expect lots of 5.10s that are stiffer than Vantage or Leavenworth, but probably a little softer than Index. There are open projects here that the guidebook casually mentions Tommy Caldwell (the TC in your TC Pros) getting close to sending.

North End - Lower angle, shorter, and often fractured, pillars give this area the greatest concentration of quality moderate routes in the area. Don’t expect to find much of anything below 5.8, but the 5.8+ to 5.9s are plentiful.

Southwest Corner and the Castle Wall - Reportedly similar to the North End but harder to get to, looser, and actually sporting routes as low as 5.5. Never been here so I can’t say more.

Cool Wall - Supposedly the best area after the Main Wall, lots of 10s and 11s, but hard to get to. Again, have not visited.

Wenger's explanation of the old "guidebook with no driving directions" shenanigans