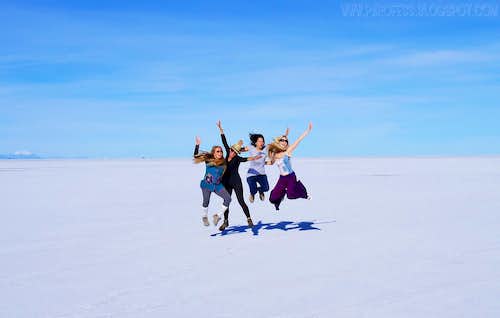 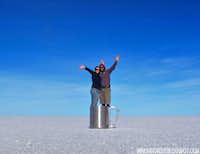 Wife and me inside the cup
Salar de Uyuni (or Salar de Tunupa) is the world's largest salt flat at 10,582 square kilometers (4,086 sq mi). It is located in the Potosí and Oruro departments in southwest Bolivia, near the crest of the Andes, and is at an elevation of 3,656 meters (11,995 ft) above mean sea level. The Salar was formed as a result of transformations between several prehistoric lakes. It is covered by a few meters of salt crust, which has an extraordinary flatness with the average altitude variations within one meter over the entire area of the Salar. The crust serves as a source of salt and covers a pool of brine, which is exceptionally rich in lithium. It contains 50 to 70% of the world's lithium reserves, which is in the process of being extracted. The large area, clear skies and the exceptional flatness of the surface make the Salar an ideal object for calibrating the altimeters of Earth observation satellites. The Salar serves as the major transport route across the Bolivian Altiplano and is a major breeding ground for several species of pink flamingos. Salar de Uyuni is also a climatological transitional zone, for towering tropical cumulus congestus and cumulus incus clouds that form in the eastern part of the massive salt flat during the summer, cannot permeate beyond the salt flat's considerably more arid western edges, near the Chilean border and the Atacama Desert.

Salar is salt flat in Spanish. Uyuni originates from the Aymara language and means a pen (enclosure), and is also the name for a town of 11,000 people (which serves as a gateway for tourists visiting the Salar). Thus Salar de Uyuni can be loosely translated as a salt flat with enclosures, the latter possibly referring to the "islands" of the Salar; or as "salt flat at [the town named] 'pen for animals'".
Aymara legend tells that the mountains Tunupa, Kusku and Kusina, which surround the Salar, were giant people. Tunupa married Kusku, but Kusku ran away from her with Kusina. Grieving Tunupa started to cry while breast-feeding her son. Her tears mixed with milk and formed the Salar. Many locals consider the Tunupa an important deity and say that the place should be called Salar de Tunupa rather than Salar de Uyuni.

Satellite calibration - Good use for the salt flat 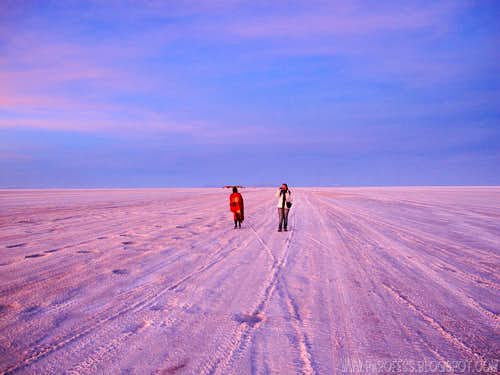 It is flat, isn't it? :)
Salt flats are ideal for calibrating the distance measurement equipment of satellites because they are large, stable surfaces with strong reflection, similar to that of ice sheets. As the largest salt flat on Earth, Salar de Uyuni is especially suitable for this purpose. In the low-rain period of from April to November, due to the absence of industry and its high elevation the skies above Salar de Uyuni are very clear, and the air is dry (relative humidity is about 30%, rainfall is roughly 1 millimetre or 0.039 inches per month). It has a stable surface which is smoothed by seasonal flooding (water dissolves the salt surface and thus keeps it leveled). As a result, the variation in the surface elevation over the 10,582-square-kilometer (4,086 sq mi) area of Salar de Uyuni is less than 1 meter (3 ft 3 in), and there are few square kilometers on Earth which are as flat. The surface reflectivity (albedo) for ultraviolet light is relatively high at 0.69 and shows variations of only a few percent during the daytime. The combination of all these features makes Salar de Uyuni about five times better for satellite calibration than the surface of an ocean. Using Salar de Uyuni as the target, ICESat has already achieved the short-term elevation measurement accuracy of below 2 centimeters (0.79 in). With the use of modern GPS technology, it can now be proved that the Salar de Uyuni is not perfectly flat. New measurements revealed previously missed features resembling ridges, hills, and valleys measuring only millimeters in height. They originate from the variation in material density, and thus the gravitational force, beneath the Salar's sediments. Just as the ocean surface rises over denser seamounts, the salt flat surface also rises and falls to reflect the subsurface density variations.

Robocop Parofes
One major tourist attraction is an antique train cemetery. It is 3 kilometers (1.9 mi) outside Uyuni and is connected to it by the old train tracks. The town served in the past as a distribution hub for the trains carrying minerals enroute to Pacific Ocean ports. The rail lines were built by British engineers arriving near the end of the 19th century and formed a sizeable community in Uyuni. The engineers were invited by British-sponsored Antofagasta and Bolivia Railway Companies, which is now Ferrocarril de Antofagasta a Bolivia. The rail construction started in 1888 and ended in 1892. It was encouraged by Bolivian President Aniceto Arce, who believed Bolivia would flourish with a good transport system, but it was also constantly sabotaged by the local Aymara indigenous Indians who saw it as an intrusion into their lives. The trains were mostly used by the mining companies. In the 1940s, the mining industry collapsed, partly because of mineral depletion. Many trains were abandoned, producing the train cemetery. There are proposals to build a museum from the cemetery.

Salar de Uyuni attracts tourists from around the world. As it is located far from the cities, a number of hotels have been built in the area. Due to lack of conventional construction materials, many of them are almost entirely (walls, roof, furniture) built with salt blocks cut from the Salar. The first such hotel was erected in 1993-1995 in the middle of the salt flat, and soon became a popular tourist destination. However, its location in the center of a desert produced sanitary problems, as most waste had to be collected manually. Mismanagement caused serious environmental pollution and the hotel had to be dismantled in 2002. New salt hotels were built near the periphery of the Salar, closer to roads, in full compliance with environmental rules.

What to do in Salar de Uyuni

Outside the salt hotel
Salar de Uyuni, or Uyuni Salt Flat, offers to its visitors some good, great things to do. Things that can give you fun moments, and photos that will be the highlight of your trips for many many years to come...Here are some things that can be done over the salar...

> Approach to climb Tunupa volcano (around 5.160m high)
> Visit using the agencies around town
> Visit the small village nearby to by salt work made by the locals
> Sleep at the Salt Hotel
> Traverse the salar (there is a traverse that can be done hiking the salar, not many people do it but this is a free walk, no guides required/ demanded. Depending on what part you start and what part you'll finish, that walk can be over 137 kms (85 miles). A long traverse which can be done in around 5 days. Probably would be like a glacier traverse since it is cold and white...hehehe
> Visit the Incahuasi Island: AKA Isla Incahuasi is a hilly and rocky outcrop of land and former island in the middle of Salar. The total area is 61 acres. The island has gigantic cacti (Trichocereus pasacana) and a tourist center. There are unusual and fragile coral-like structures and deposits that often consist of fossils and algae. The island is actually the top of the remains of an ancient volcano, which was submerged when the area was part of a giant prehistoric lake, roughly 40,000 years ago.

PS: To visit the Incahiasi Island depends on water level over the Salar. Some guides will drive you there just for fun, some guides you have to pay some extra money (la propina - bribe), and some guides won't drive you at all.

Enjoy a video of the sunrise over the salar.

Me as the camera man, my wife and after her my mother in law. 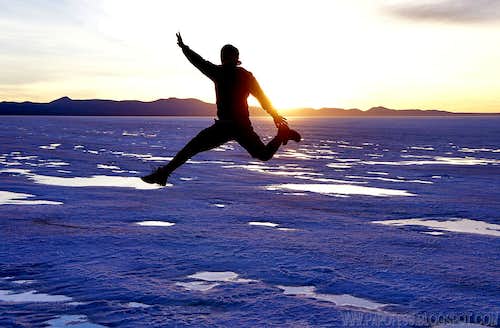 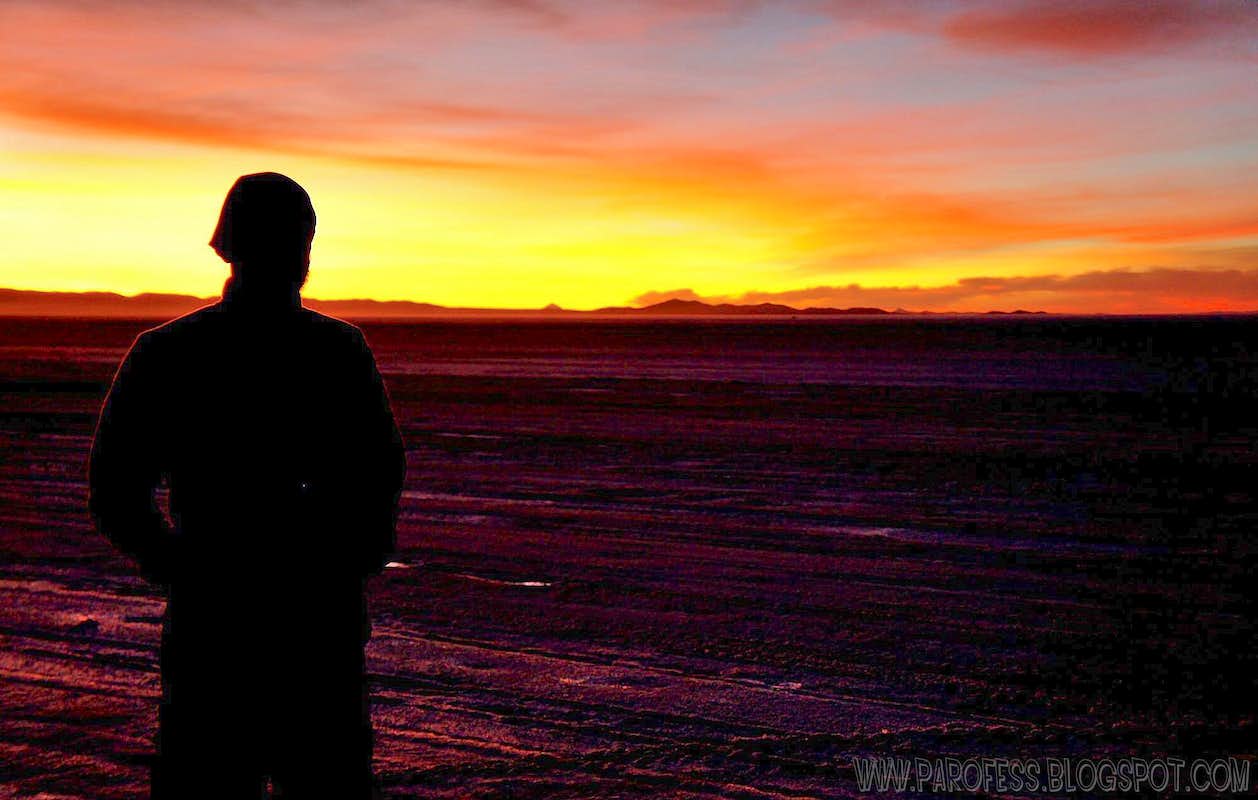 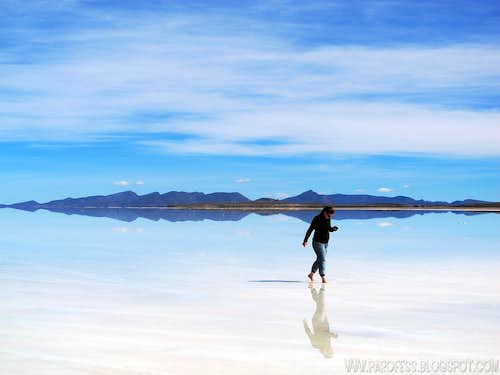 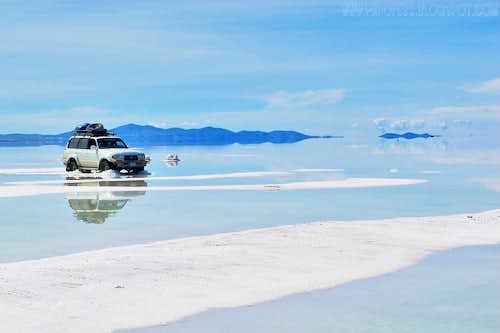 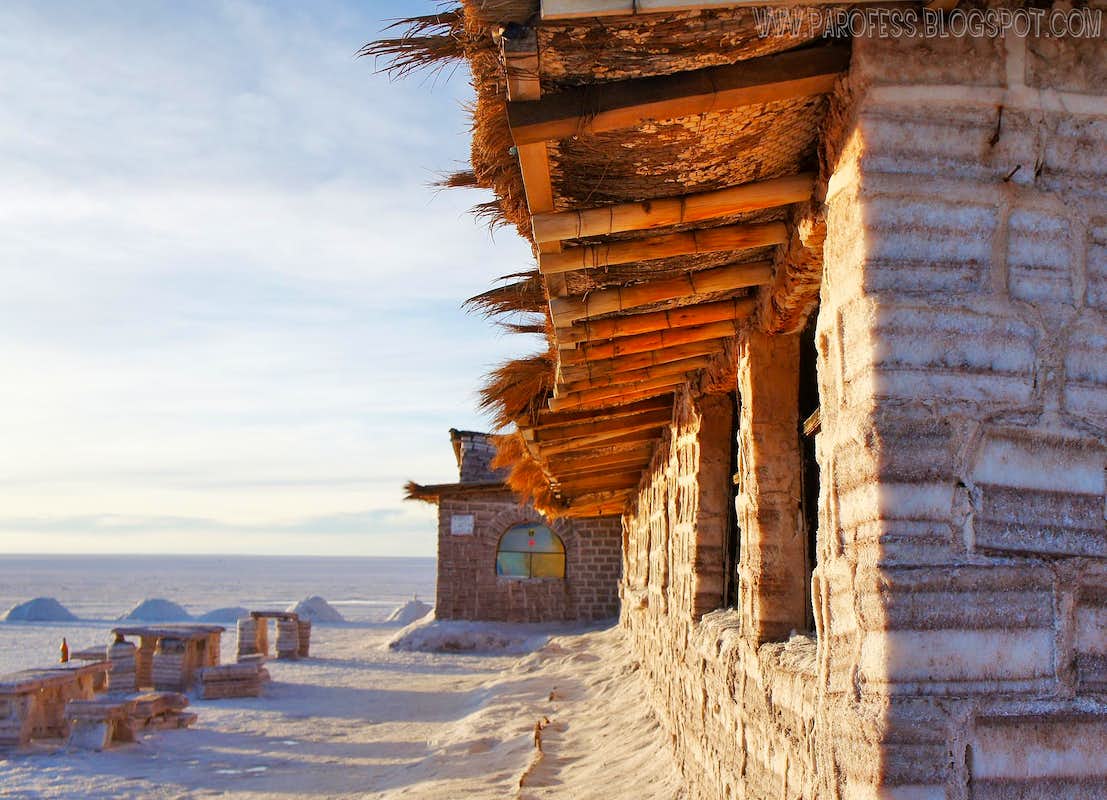 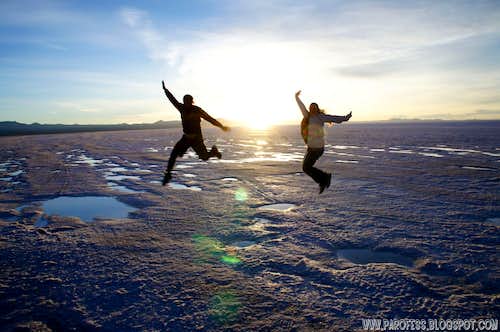 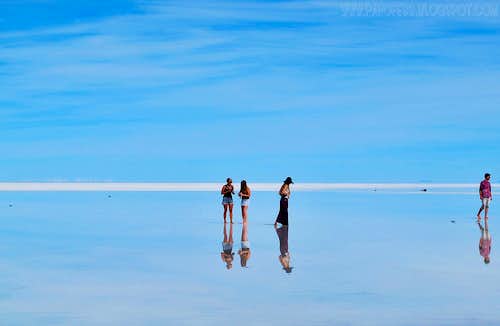 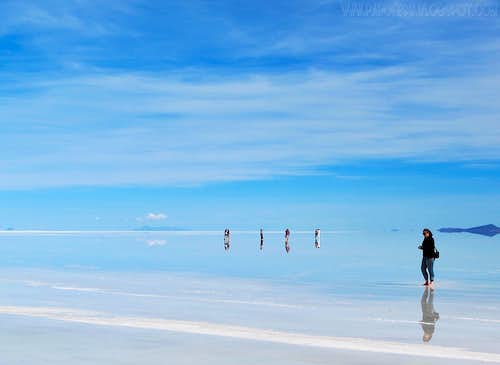 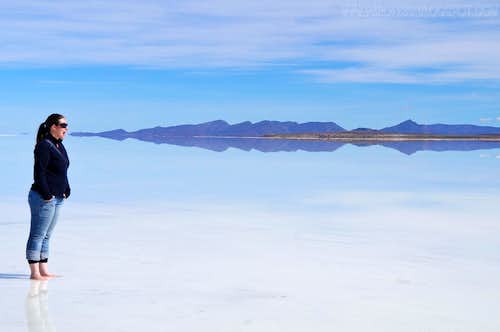 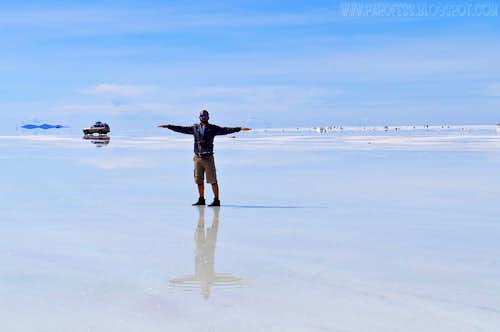 Look at the size of that thing... 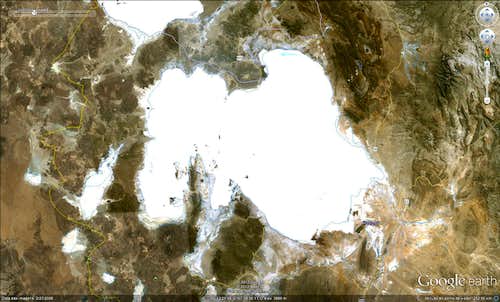 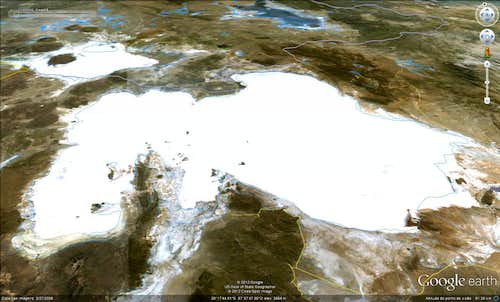 No need to camp unless you're doing the traverse route over the salt flat. If that's the case, anywhere you want!

It's possible to visit the Salar from other places than Uyuni. For example you can take a multi-day tour from San Pedro de Atacama in Chile to Uyuni, or from Tupiza round the SW of Bolivia and back to Uyuni across the Salar. Likewise you can go from Uyuni and end up in SPDA or Tupiza. Depending on the itinerary you can take in a few mountain climbs such as Licancabur as well as all the other interesting sights. Also there isn't always water on the Salar, it depends on the season and the amount will affect where you can go so do a bit of research on current climate patterns for the area and double check locally whether you will be able to fulfill your plans.