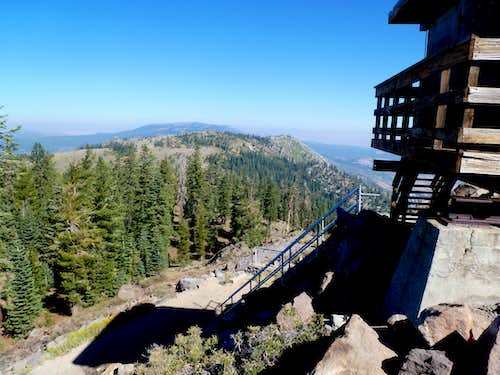 Verdi Peak 8,444' and Ladybug Peak 8,380' are two peaks located just across the Nevada/California border to the west of Verdi, Nevada. They are odd peaks - desert like on the east side, and forested on the west side. Similarly, views east reveal a desert landscape, and views west show a forested landscape.

Verdi Peak is the highest point in the Verdi Range, which covers about 12 miles north-south. It's southern terminus is at I-80, it's northern terminus at Henness Pass. These peaks are just north of the Carson Range, and are part of the northern Sierra Nevada Mountains, which are far lower than their southern counterparts, but still rise up precipitously from the valley floor.

The two summits are located about a mile from each other and share a saddle at about 8,055'. They are reached from the same approaches. These primary approaches are from the north side or northwest side near the Stampede Reservoir. Roads lead up to just below the summit of Verdi Peak, and within 250 yards of the summit of Ladybug Peak. So, a 4WD can get you really close to these summits. Without 4WD, the closest you can get is a little under 5 1/2 miles from Verdi Peak.

There is temptation to approach Verdi and Ladybug Peaks from the east side, especially for those living in Reno-Sparks, Nevada. After all, Verdi is nearly 30 minutes closer to Reno/Sparks than the Stampede Reservoir. In fact, there is a way to reach these peaks from the east, without crossing private lands, or at least without crossing lands with restricted access. However, to do so is brutally tough due to the thick brush that covers both peaks, and the very steep, trail-less, route-less, approach involved. It is probably better to try this approach with snowshoes. More details are in the route information summary section.

These peaks can be climbed year-round, but are typically snow covered from late-November through late-April-mid-May. The road to Stampede may be closed if snow conditions warrant. Views are excellent, with mountains on all sides. Fall is probably the best time to hike here, or late spring if snow levels are adequately low.

For the standard approaches, take exit 194 off of I-80. About 25 miles west of Reno, Nevada and 107 miles northeast of Sacramento, California. Pass the train tracks (which can sometimes cause delays) and pass the Boca Reservoir on the left. Head past the turn off to Stampede Reservoir and end at a dirt road, which is Henness Pass Road. This intersection, also a large parking area, with campgrounds and dirt roads going in all different directions, is 10.4 miles from I-80. From here there are several options to reach these peaks, which will be described in the route information summary. 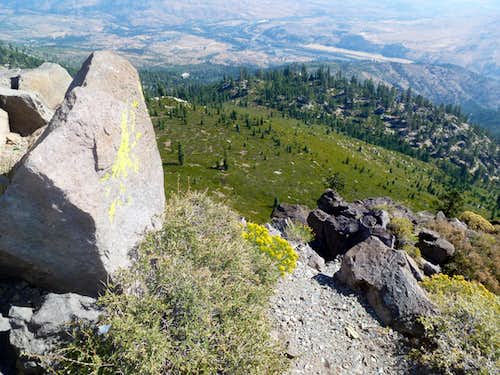 View down the steep east face of Verdi Peak

There are three approaches of note.

The Northwest - 2WD
The shortest route for passenger cars is from the Northwest near the intersection with Stampede Dam Road and Henness Pass Road (directions described above). Once at the intersection, take a right and head about 200 yards up the road. There is a well-graded dirt road. Passenger cars can go another 1/2 mile, passing some power lines, and campgrounds in the vicinity. Park around the campgrounds and continue to an intersection. Take the road to the right. It terminates close to a series of large power lines. But it doesn't go all the way up to the power line road. A use trail heads towards the power lines. Some minor bushwhacking is possibly required if you get off track. Once at the power lines, head left (north) about 1/3rd mile down and up steep hills to the intersection with Verdi Peak Road or "Forest Route 72". This is the road to the saddle between Verdi Peak and Ladybug Peak. There are numerous side roads, but stay on the obvious road. At one point a sign points to Verdi Peak, but when I was there, the sign was on the ground. Regardless, this is the road going up. Once at the saddle, one road goes left to Ladybug Peak in about 1/2 mile. The other road goes right to Verdi Peak in a little less than a mile. 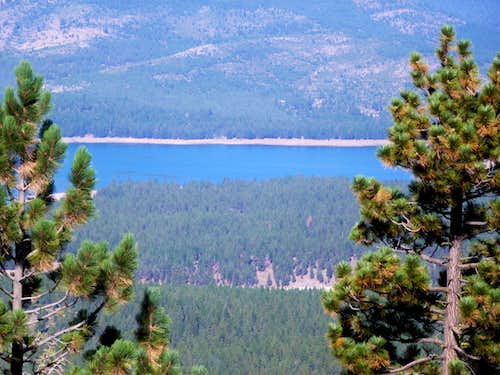 This can be cut short if you climb up to Ladybug Peak before the saddle. To do this is easy. You will see a big rocky summit on your left once you get high up on the road. This is not Ladybug Peak, but close to it. Walk up through the forest towards the rocks. This is much faster on the way up, but not recommended on the way down. 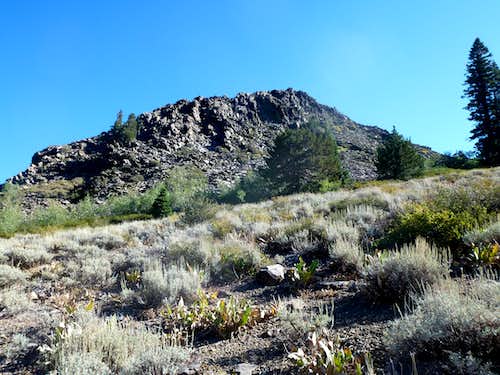 The rocky sub-summit below Ladybug Peak

Once atop Ladybug Peak, scramble down towards Verdi Peak, and you will soon reach a road which leads to the saddle. Once back to the main road at the saddle, cross over to the road to Verdi Peak.

Climbing both peaks this way, from the noted starting point is about 12 miles round trip, with an elevation gain of about 2,730'.


The West - 4WD
At the intersection with Henness Pass Road, take a left and head 2 miles up. You will find Forest Route 72 to Verdi Peak. If you park here and hike, it is basically the same round trip distance as the route described above, but with an elevation gain closer to 2,400'.  A 4WD is required to get here.  However, a 4WD can make it all the way to the summit of Verdi Peak and to within 250 yards of Ladybug Peak.  However, there are plenty of places to park in between.

The East
If absolutely determined to hike from the east, get off at Exit 2 of I-80 still in Nevada. Head north and turn left onto Trelease Lane, and then take a quick right onto Hill Lane. Follow Hill Lane for a little over a mile. Shortly after the road goes from paved to dirt, take a left on an unmarked road which leads to an electrical substation. The land is owned by the power company, and is not closed to the public.  This is best done in snowshoes so as to avoid some of the brush, and simply walk up snow instead.

From the substation at about 5045’, follow the road below the power lines. It goes uphill, then descends, and soon after curves to the left (south). About ¼ mile or so after it curves left, the road ends at another road. Continue left. There is a well graded dirt road that you can look for as you head left (south). It is blocked by private landowners if trying to get on it from the valley floor, but may not be higher up. It dead ends at a little over 7,200', approximately 5 miles from the substation. From here, you'd want to head to Ladybug Peak on your right. Rigorous bushwhacking is required to make it the next 1,170' or so in 3/4 miles. Bring a good map, and review Google Earth™. As noted, this is better done in heavy snow, although the approach can be a killer, unless it is nice and hard-packed snow.  Regardless, this route is not recommended, but can be done. To summit both peaks requires at least 13 miles, if not more, of round trip distance. Elevation gain to get both peaks is about 3800'.

Another option for an eastern approach is to get in touch with Verdi Trails Ranch: http://www.verditrailsranch.com/

They are located at 175 Trelease Lane Verdi, NV 89439. Their number is (775) 345-7600. They can arrange horses to take you up trails around Verdi Peak, and/or grant access to the main road to the mountain, which will cut distance considerably. A price for their services, or additional details, will have to be worked out with the ranch. 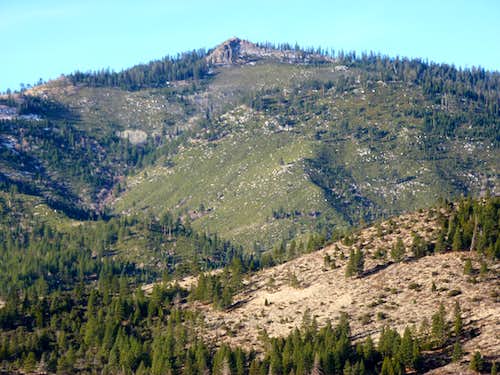 East face of Verdi Peak - In the photo above notice the thick green covering the the peak. Maybe it looks like an easy trek, but not so. That thick brush up close is a massive slog to get through!

There is no red tape for the standard western approaches.  The parking areas and the peaks are located in Toiyabe National Forest.