Victoria Peak rises high above the Gold and White River watersheds of north central Vancouver Island, British Columbia. Victoria and its immediate neighbour, Warden Peak, form the shattered remains of a long extinct and substantially eroded volcano. The east aspect of the pair of mountains offers a clear outline of what the parent volcano must once have looked like.

The first recorded ascent of Victoria Peak by Frank Stapley and Dave Williamson did not take place until August 1960. In those days, an ascent to the summit represented a multi-day commitment involving long distances on foot, virgin bush, snow, ice and technical rock. In recent years, however, logging in both valleys has placed roads high on the south and north west flanks of the mountain. This permits much easier access to the point, in fact, where the climb from the south (Gold River) side may be undertaken as a day trip, albeit a long one, from cars. For those with more time available, there is wonderful camping on the south ridge, from where, if the weather co-operates, the trip can be enjoyed at a more leisurely pace.

On March 8, 2009, John Waters, Curtis Lyon and Louis Monjo snowmobiled 40 km up the White River Road and made the first winter ascent of Victoria Peak via The Sceptre. An achievement already impressive enough was made more so by the fact that, on the approach, John was towed on skis behind the 2-man machine! For complete details of John, Curtis and Louis' achievement, refer to the links section at the end of this page.

In the early days of the Alpine Club of Canada (ACC) the status of Senior Member was awarded to those members who had scaled any three summits over 11,000 feet (in the days before we went metric). Unfortunately for Vancouver Island members, there is nothing here much over 7,000 feet. For this reason a special criterion was set up for Island members; a list of nine summits of sufficient difficulty as to ensure that any mountaineer who had scaled any three had attained a degree of climbing expertise deserving of Senior Membership.
These nine summits became known as the “Island Qualifiers” and, although Senior Member status has long since become redundant, Island climbers still aspire to "do their IQ’s”. Victoria and its neighbour, Warden Peak, are both qualifiers. At 2,163m it is also the third highest peak on the Island after The Golden Hinde and Elkhorn. 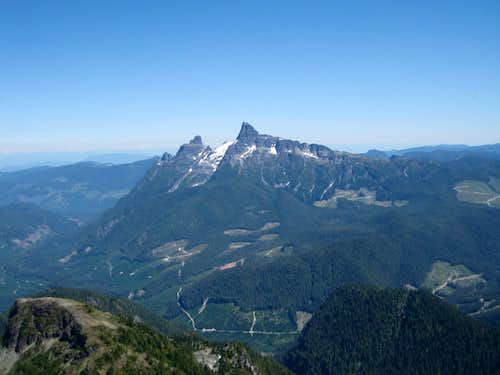 Vancouver Island can be reached by air from Vancouver to Victoria, Nanaimo or Campbell River and by ferry from Port Angeles to Victoria on The Coho and on BC Ferries from Vancouver to Victoria or Nanaimo. Public transport on the Island is relatively poor and anyone arriving by air would be advised to rent a car. Access in this case involves steep and rough logging roads, some of them de-built, with drainage culverts removed and the residual water bars to cross. A 4WD vehicle with high clearance is essential, especially for the last 2-3km to the highest driveable point.
From Campbell River, at the end of the Island Highway 19, take highway 28 west towards Gold River. After approximately 30km the road meets Upper Campbell Lake with the first views over the mountains and after 47km you will enter Strathcona Park at Elk Portal. Exactly 1km further on highway 28 makes a right turn over the bridge at Buttle Narrows. Take this turn and drive all the way to Gold River. There is no gas beyond this point so make sure you have enough to cover at least 150km.
From Gold River follow signs initially to Tahsis or Nimpkish.

Roughly 2-3 km from town cross the Gold River and immediately take the right fork to Nimpkish (left goes to Tahsis). The pavement ends at this point. You are now on Gold River West Road. After 6km ignore a right turn which crosses the Gold River to East Rd. Carry straight on a further 3km to where the road forks left to Nimpkish. Take the right fork. This is still West Road. The road now starts to become rougher and narrower. Go ahead a further 12km to yet another fork. This leads to the last crossing of the Gold River and, if you have somehow found yourself on the east bank to this point, is your last chance to get back onto the correct west bank.
Assuming, however, that you’ve made no mistake from these impeccable directions, keep left to stay on West Road. Almost immediately the road becomes much narrower and overgrown in places. Carry straight on for 7 or 8km of more or less flat going ignoring numerous branch roads. You will encounter two very rough sections where the road crosses swamp and has been built on fill. Shortly after passing the turn off for Twaddle Lake, the road swings steeply uphill and right and you begin the last part of the approach. The road is now branch W-79.

If you haven’t already done so, engage 4WD and climb up 900m over 5-6km to a flat area where the road ends in a pile of logging slash. The last 2-3km switchbacks steeply and there are 10 or 15 water bars to cross, some of them quite deep. These will get progressively deeper with use and lack of maintenance. At the top of the road there is lots of room to park and to pitch a tent if you want to stay here the night and get an early start the next day. Driving time to here from Campbell River, not including a stop in Gold River is approximately 3 hours. The logging road isn’t exactly an attractive place to stay but the surroundings are – just ignore what’s in your immediate vicinity.

Strictly speaking, for those day-tripping the peak, the “route” section could be construed as starting here. However, many, if not most, climbers spend a night on the south ridge itself, so we will define the next phase as still a part of the approach.
From the logging road at ~1,100m elevation pick up one of two flagged routes heading up to the old growth on the south ridge. One goes up directly whereas the other takes a less steep line and begins 50m further on towards the end of the road. Endure an initial 15-20 minutes of logging slash before reaching the trees. The two starts merge here. There is no trail as such but the path is getting progressively more booted-in as the seasons pass. It is also well flagged. Head east up the route to meet the lower south ridge at an obvious saddle about 45 minutes from the start.
Turn left (north) and follow the ridge over several bumps into the open alpine. In early season, on snow, be prepared for some exposure on the last of these bumps, particularly when descending. Approximately 2 hours from the car you arrive at a lovely tarn with excellent spots for camping at ~1500m. There are water sources higher on the ridge but most people camp here for the night. If the weather is clear, the peak is in plain view to the north. To the south are the mountains of Strathcona Park and to the west, the Sutton Range: Mts Waring, Alston and Sutton.

You are on Crown land under lease to Western Forest Products. Although there is no formal permission to seek nor fees to pay, un-advertised logging road closures and logging activity are facts of life on Vancouver Island. It would be prudent therefore, to stop at the WPF office in Gold River, announce your intentions and obtain any pertinent information. You can also purchase excellent current maps at the same office.
Make sure that you have left a detailed trip plan with someone responsible. The RCMP and the appropriate SAR agency will respond in an emergency but it is up to you to have the mechanism in place that will initiate a call out by the authorities.

Camp on the south ridge
As indicated above, there are two options for camping. Either at the top of the logging road or 2 hours above there at the large tarn on the S ridge proper. If you are car camping on the road, bring sufficient water; there is nothing there. If you are camping at the tarn, practice good back country methods – hanging food bags out of reach, cleaning up all cooking scraps, good toilet practice etc. As is the norm on Vancouver Island, giardia is well documented, so boil or treat all water. Pack a small stove for cooking and don’t light campfires.

I was up on Sept 29, 2012. I approached via Gold River. There is a huge washout about 2km south of the final Gold River crossing between East and West roads. You have to take East Road to get there now. On the plus side, there is active logging most of the way up W-79. So the roads up are in pretty good shape. About 3km from the trailhead, however, there has been a log placed across the road. I managed to get around since I ride a motorbike but trucks can't make it past. I'll upload a few pictures to the page. The rest of your directions were impeccable.

Drove up W-79 on Aug. 3, 2016. 3 hour drive from Campbell River is a fair estimate. The log is no longer across the road and you can drive all the way up to the trail head. The cross ditches start at about the location that the log was blocking the road (3km from the end)but the road is clear of brush and in good shape (4X4 still required though).Trail head is clearly marked and easy to find and the trail is easy to follow up onto the ridge and into the alpine. Twenty minutes onto the ridge, another 30 minutes to the tarns, 1.5-2 hours from truck to descending onto the lower snowfield below the south face.(fast walking times). After that, things slow right down with scrambling, route finding and steeper slopes. We found that the route suggestions from Island Alpine, Islandhikes.com and others (http://eathikesleeprepeat.blogspot.ca/2012/07/victoria-peak-vancouver-islands-3rd.html)were very good, but once past the "difficult section" that everyone discusses (used a rope), we strayed west too far and we had a hard time finding a climbable route at the top. I would suggest following the South East ridge up as far as possible (to the bottom of the false summit) then trending to the middle of the South Face near the top to find a route to the summit. I would say this is an easy climb for a climber, but a difficult ascent for someone who is used to mountains like Albert Edward or Kings Peak.15 to 17 hours return trip from Campbell River. I just found vancouver islander's post on his South Face route. It is very helpful! http://www.summitpost.org/victoria-peak-south-face-standard-route/185919