The third largest of the Ionian Islands, Zakynthos lies 8.5 miles to the south of Cephalonia Island with its most northerly point, Schinari, opposite Mouda at the southern tip of Cephalonia. It is roughly 125 km long, and covers an area of 410 square kilometers. To the east, at a distance of approximately 9.5 miles, is the coast of the Peloponnese to which the island is linked by a frequent ferry service (the trip from Kyllini to Zakynthos takes about an hour and a half). The narrowest opening between the island and the mainland is between Trypiti in the Peloponnese and Kryoneri on Zakynthos.

The terrain is varied; there are plains in the eastern part which merge gently into peaceful bays and golden beaches, while the western side of the island is mountainous with steep cliffs along the coastline. 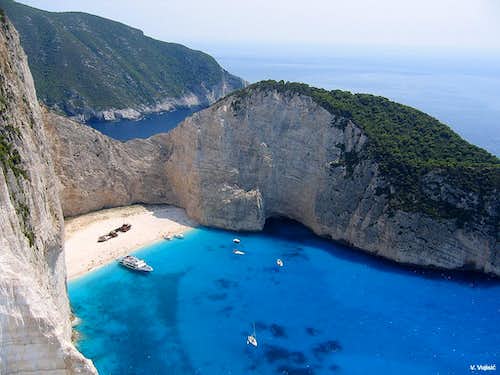 Although the mountains are not particularly high, they occupy a fair portion of the island. The highest is Mount Vrahionas (756 m)(Oros Vrahionas), while other mountains of note are Kaki Rachi (680 m), Mount Atheras (583 m) and Mount Skopos (483 m), with some lower ones that together form a small plateau. 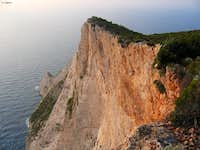 Cliffs above the sea 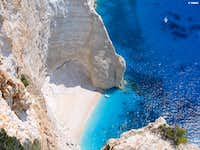 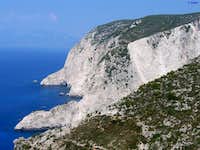 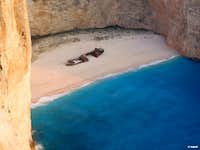 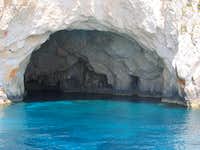 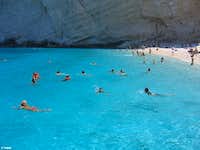 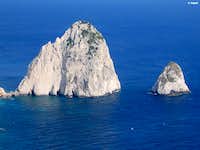 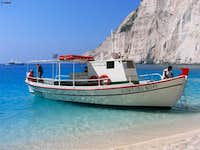 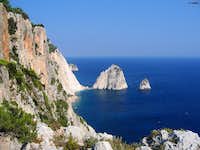 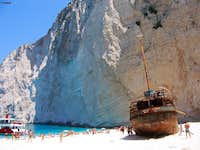 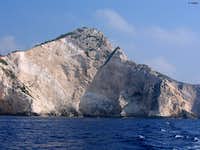 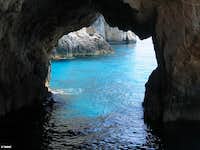 Inside of Blue Caves 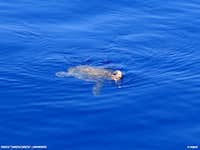 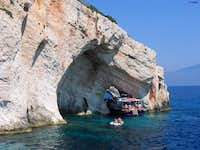 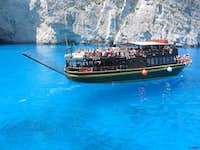 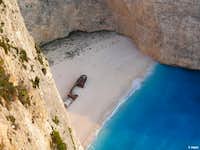 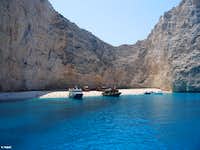 The main bays are at Laganas, in the south, which has a superb sandy beach that stretches for 90 kilometres, Tsilivi, Alykes and Schiza. The most important promontories are those at Schinari and Marathia, at the island’s northernmost and southernmost points respectively; Keri in the south-west, Yeraki on the north-eastern coast of the island, and Kryoneri which lies to the north of the town of Zakynthos. Laganas Bay encompasses the rocky and uninhabited islets of Marathonissi, Agios Sostis and Pelouzo, with the Strofades islands (which belong administratively to the prefecture of Zakynthos) lying about 75 km, to the south.

Zakynthos has many underground streams which are fed by a number of wells and springs; the island is therefore blessed with abundant waters, which together with its fertile soil guarantee a plentiful supply of agricultural produce. The island’s main products are oil, grapes, wine, citrus fruits, potatoes and onions, while the upland pastures favour animal-rearing. From a geological viewpoint the island is of great interest. Geologists believe that in the distant past Zakynthos was part of a submarine plate which was pushed up as a result of powerful earthquakes to form an island.

The major geological realignments in this marine region resulted in the creation of a great many islets, reefs and underwater shelves. They also caused the opening of a huge underwater fault known as "The Well of Inousses" to the south-east of Zakynthos, where the Mediterranean attains its greatest depth (approx. 4500 m).

As a result of the intense geological activity in the region some remarkable caves were formed on the island, both on land and in the sea. Some of these are extremely interesting and there is access to many of them. The soil of Zakynthos contains gypsum, sulphur and hydrocarbons. In the southern part of the island, near Keri, bituminous water gushes out of the ground, but drilling of boreholes in the area in search of oil has proved fruitless. 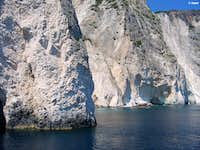 The climate of the island is mild, with gentle winters and cool summers. The abundant rainfall, in contrast to the rare occurrence of snow, favours the growth of vegetation and ensures considerable water reserves, which is why the island is so green. Aparth from the olive groves and vineyards, orchards full of citrus trees and every other kind of fruit, areas of garden produce and cereals, much of the island is forested and, on some of the beaches, trees grow right down to the water’s edge.

The island’s rich vegetation and serene natural environment, its peaceful landscape unruffled by the rocky protuberances of the mountains which instead merely add veriety, an innate feeling of langour that seems to pervade every corner of the island – whether by the seaside or up in the mountains – all these contribute to creating and illusion of paradise. It may not be quite so primitive but there is no doubt that it is a latter-day Paradise on Earth.

Zakynthos is the home of one of most beautiful, most impressive and most photographed beach of Greece and also of the rest of the world - Navagio Shipwreck. This wonderful beach with it's unreal blue water, located belowe the high white cliffs, attrack year after year thousands of tourist worldwide to visit this Paradise on Earth.

Also, we can't forget to say that one of the most famous trademarks of Zakynhtos is turtle called Careta Careta, with it's approximately length 1.20 m.

So, welcome to visit greek Paradise on Earth! 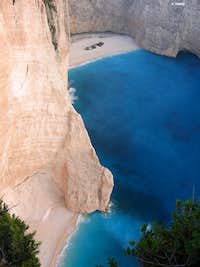 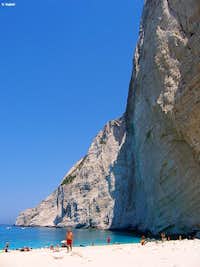 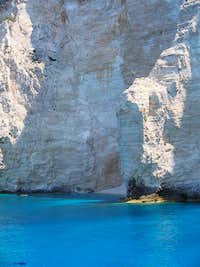 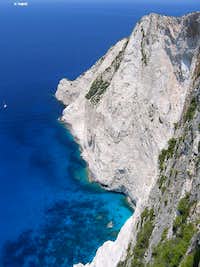 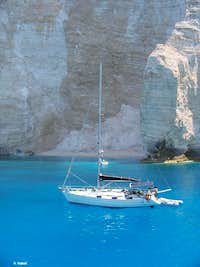 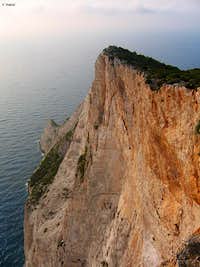 High above the sea

HOW (TIMETABLE) to get Zakynthos (Zante) Island, Greece:

A. From Athens to Zakynthos Island by:

B. From Thessaloniki to Zakynthos Island by:

Airplane from the "Macedonia" Thessaloniki Airport

From Zakynthos (Zante), visitors can also fly to the airports of other Ionian Islands (Kefalonia & Kerkyra) and Preveza town in Epirus or take a boat to Kefalonia. For more information, kindly contact the Zakynthos Airport and the Zakynthos Port. 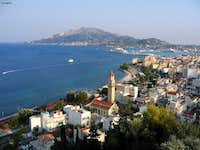 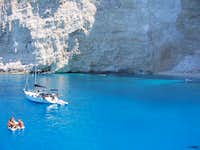 How to get to Mt Vrahionas 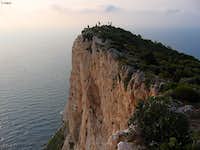 From all of the mountains of Zakynthos Island, Mt Vrahionas (756 m) is the highest one. 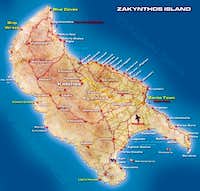 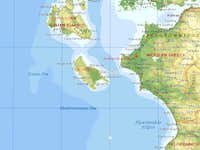