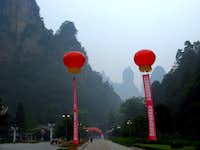 
Zhangjia Jie is one of those places that just takes your breath away. Enormous sandstone pillars until 400meters high dominate the view in every direction. Between the pillars an ever present thick layer of mist creates a fairytale appearance. The pillars and valleys are covered in a dense, moist tropical-like forest, which makes the amazing setting of this Chinese National Park complete.
It was not a surprise the UNESCO put Zhangjia Jie on the World Heritage list already back in 1992.

Zhangjia Jie is part of the Wullingyuan district together with Suoxiyu Natural Resource Reserve, Tianzi (son of heaven) Mountain Natural Resource Reserve and the newly added Yangjiajie Scenic Area.
The whole district consists of over 3100 sandstone pillars of which 1036 are higher than 400 meters! Also 2 large natural bridges, over 40 large caves and many, many streams, waterfalls and pools are present.
Finally, Zangjia Jie is home to many endangered animal and plant species. An example is the Lobster Flower (Long Xia Flower), a sort of flower that can change color five times in a day. Species like these make Zhangjia Jie a very special place. 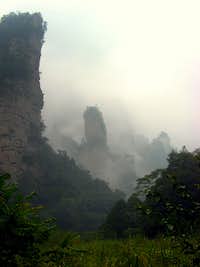 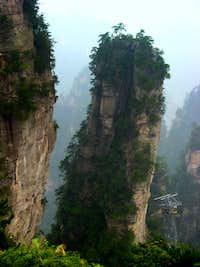 The geological formation of the Zhangjiajie belongs to the tectonic system of New Cathaysian. About three billion years ago, the place was part of a large ocean. After a series of major geological changes including Wuling-xuefeng, Indo-china, Yanshan, Himalayan and Neotectonic movements, the bottom of ocean rose above surface, and the quartzite sandstone pillars took shape after gradual eroding and crumbling of nature for several millions of years.

The whole area is covered with towering pillars of quartz sandstone and dense tropical-like forests. The highest peak in the area is Tuerwangyue Feng or Rabbit Watching the Moon Peak. 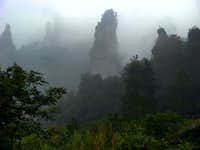 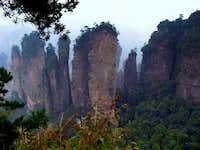 They come in every kind of shape 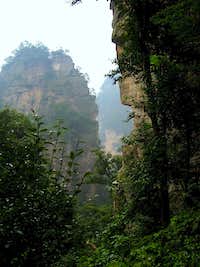 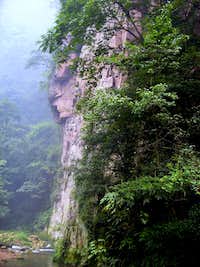 Zhangjiajie has a sub-tropical humid monsoon climate. The high towers and thick trees help form a typical climate: warm in winter and cool in summer. The annual average temperature is about 16 degrees C. The annual average hours of sunshine is 1440 and the annual amount of rainfall 1400 mm.. The average frost-free period is about 216 to 269 days a year.
Zhangjia Jie has a primitive ecological environment that offers healthy air which is believed to be rich in negative oxygen. 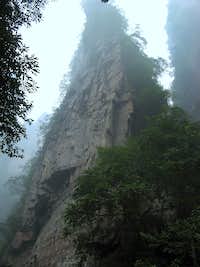 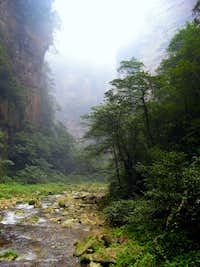 In ancient times, Zhangjiajie was seen as remote and highly inaccessible. The earliest human remains can be traced to 100.00 years before present.
Zhangjiajie City (which is close to the NP) was formerly named Dayong city, founded in 1988. As Zhangjiajie National Park is becoming increasingly famous, Dayong city was renamed as Zhangjiajie city back in in 1994.

Zhangjiajie is home to three ethnic groups—Tujia, Bai and Miao people.They account of 70% of the people who live in the area. These people still remain most of their traditional culture. They have their own language, festivals and clothing. 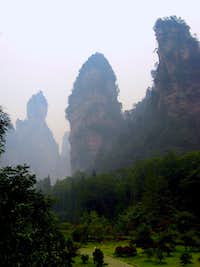 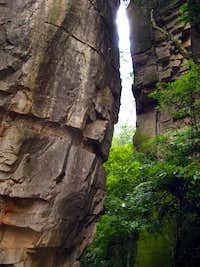 For hiking in Zhangjiajie, there are a varity of trails. From Zhangjiajie Village, the road leads down to the park entrance:

Route 1
When you take a left after the main gate, on the trail to Huangshi Village is a 4-hour circuit trough a forested valley. The Pipa Stream flows along to the left of the path, crossed by several bridges. Along the way, there are viewing platforms ideal for a rest stop beneath the shadows of the Double Pagoda Peak.

Route 2
To the right of the entrance are several different paths. The shortest (around 4 hours) follows the Golden Whipple Stream. Following a beautiful valley for several kilometers, the path then branches off and returns towards the entrance beneath the Yearning Couple. ( two rock pinnacles)