Starting Point - Olympia Skistadion, elevation 740m (2,428 ft).
Peak - 2,962m (9,718 ft)
Elevation Gain - 2,222m (7,290 ft)
Route Type - Hiking
Length: about 12 miles one-way (we took a little detour early on, so our track is 12.6 miles)
There are more technical routes up Zugspitze using via-ferrata that we originally planned to use, but the forecast was for heavy rain and storms and we decided that this was our best bet at getting to the top.  In addition, some local friends had told us this was the most scenic route up.  Note that if you do one of the via-ferrata routes there are many places to rent equipment from, but they are all closed on Sunday (as are most stores in Germany!).
You could probably do this in one long day if you really wanted to, but the huts are so nice and cheap (about 22-28 euros/night) that it makes sense to take 2 days unless you are in a rush.
The start of this route is easy to find. It starts right behind the Olympic Stadium in Garmisch-Partenkirchen. 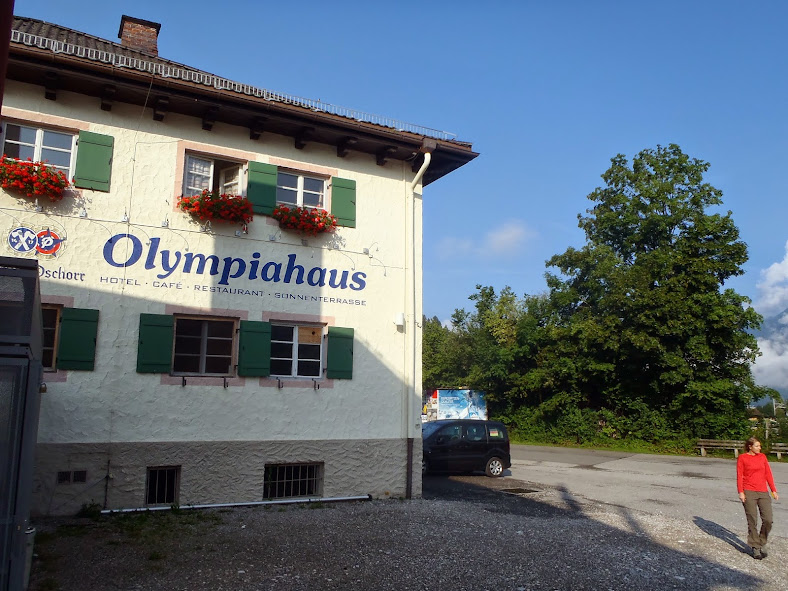 Starting Point. Olympiahaus.
You follow the signs to PartnachKlamm, which is a narrow canyon with a trail cut into the steep walls. You have to pay a fee of a few Euros to pass through the canyon, but it is a cool trail and worth it in my opinion. 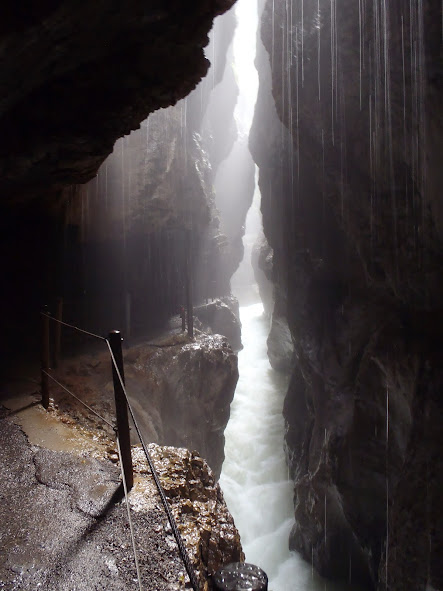 PartnachKlamm
After the canyon walk, you want to follow the signs for the Reintal route. If you look at our GPS tracks above you will notice we took a wrong turn early on and detoured off the Reintal route, then rejoined it.  We should have realized our mistake when we started climbing steeply. The reintal route follows the river from the end of the canyon for several hours through the wide and spectacular valley.  The water in the river is crystal clear. 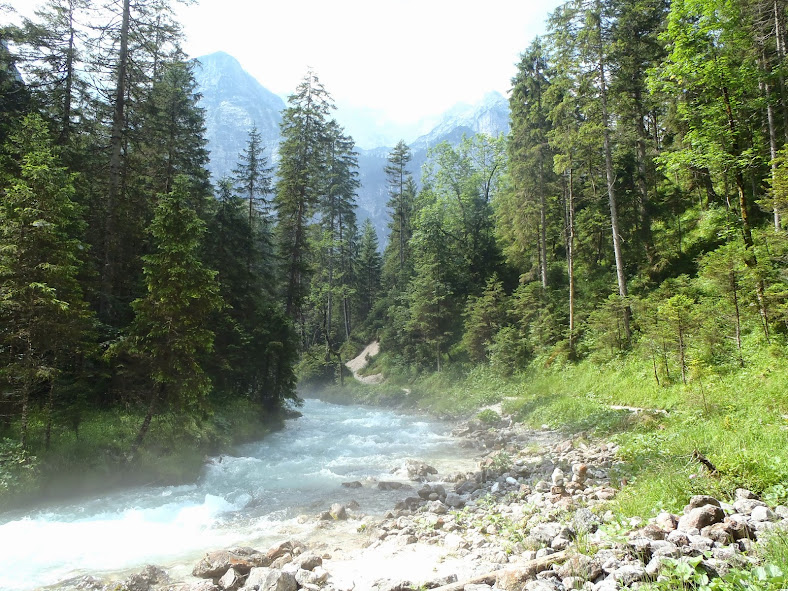 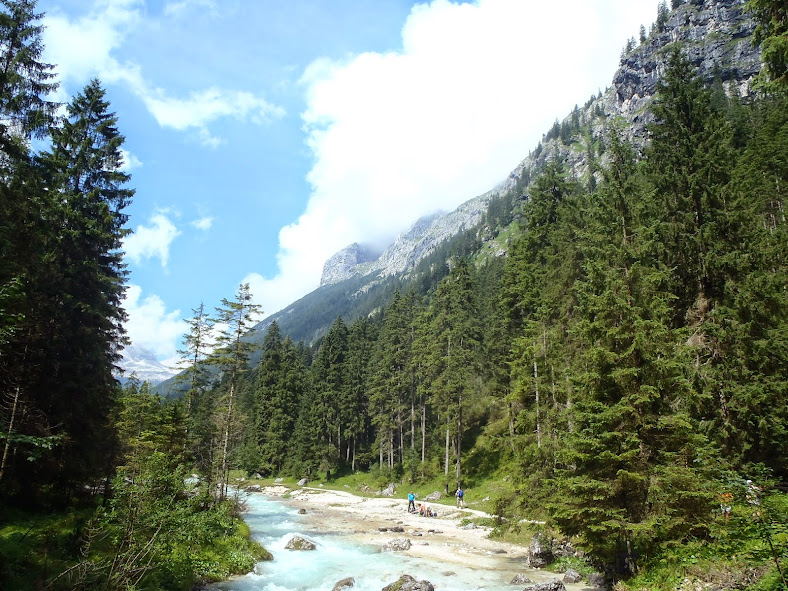 There is very little elevation gain at this point -- we even saw some people on bikes on the route.  The easy trail continues to BockHütte.  If you are gaining any serious elevation before that, you probably took a wrong turn! 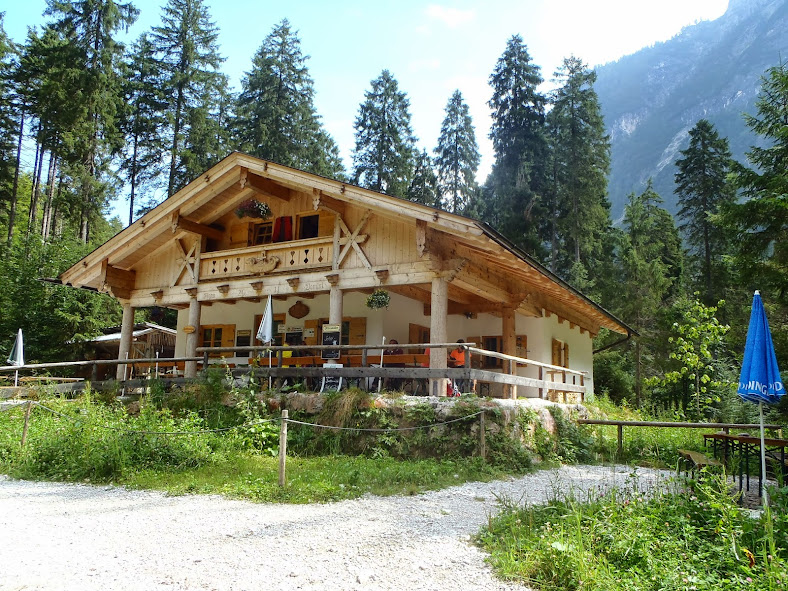 BockHütte
From BockHütte the trail starts to climb and get rockier.  You continue to stay in the middle of the valley. 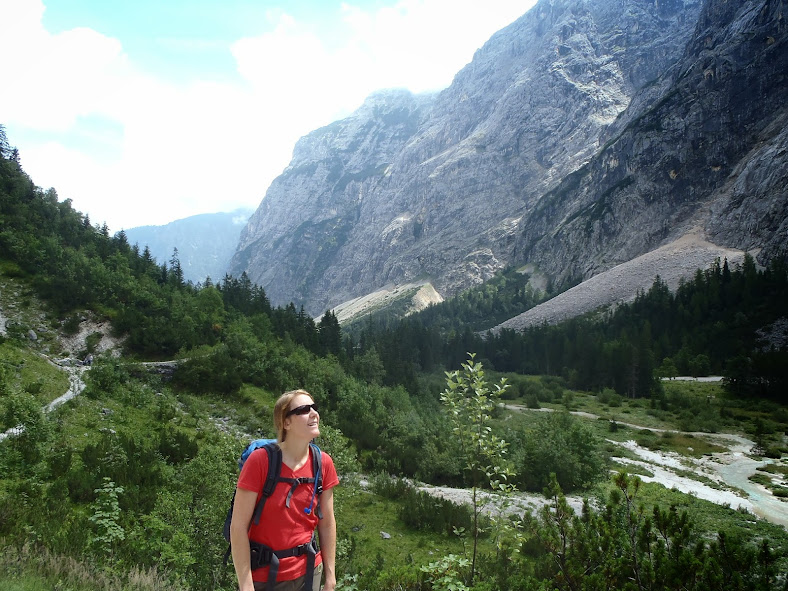 Eventually you see a nice waterfall in the middle of the valley -- you are getting close to the next hut. It is about .75km from the waterfall to ReintalangerHütte. 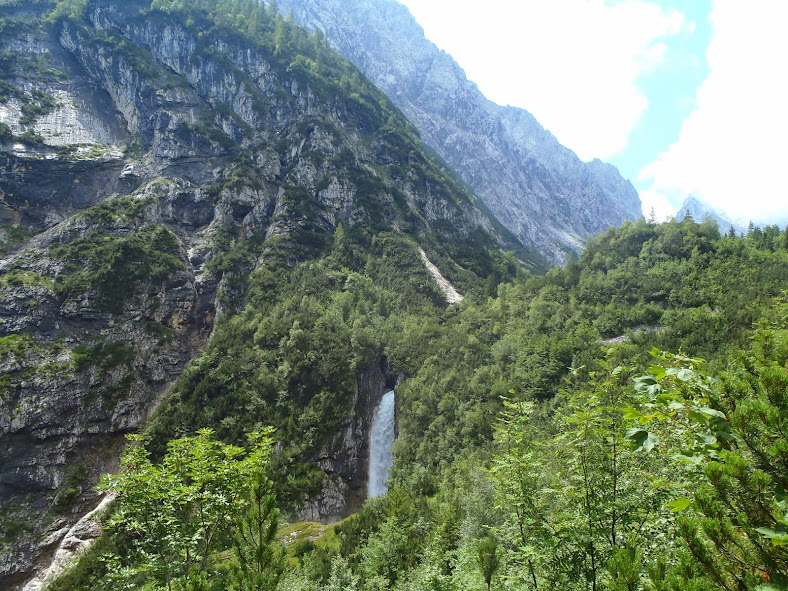 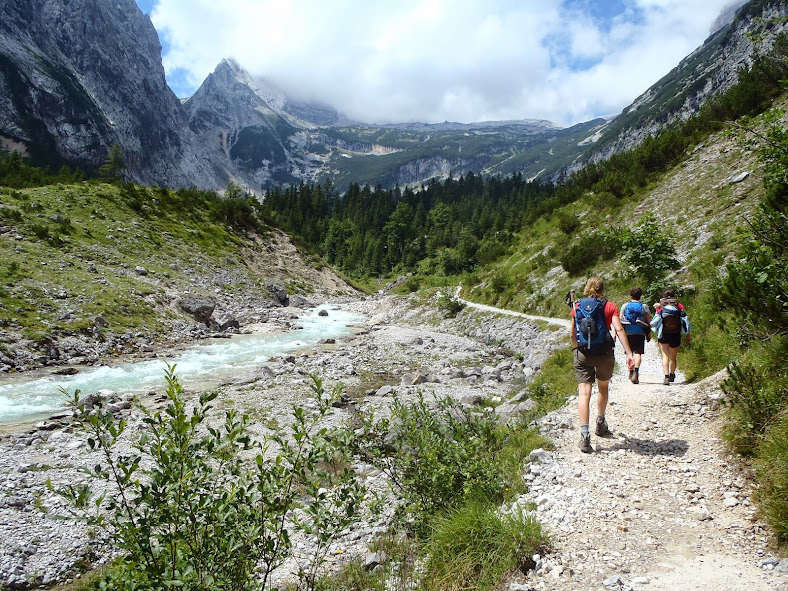 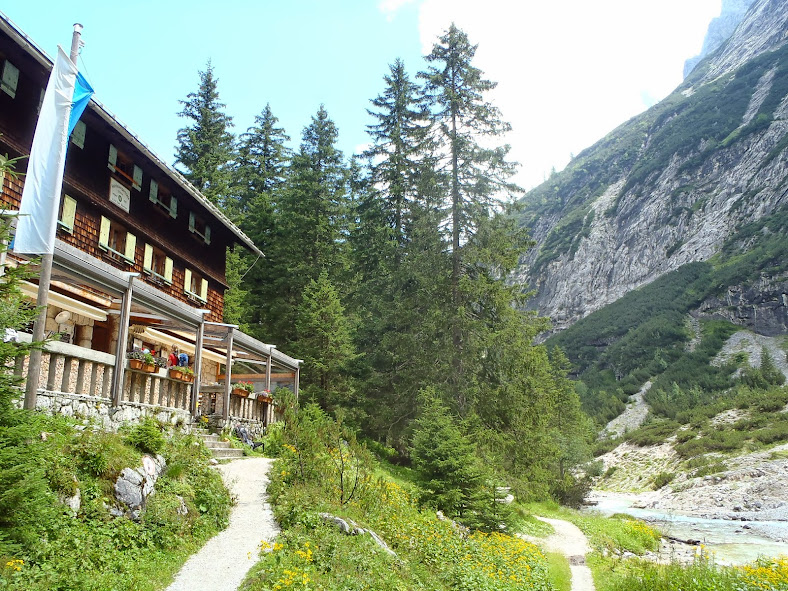 ReintalangerHütte, Zugspitze
The hut is very nice and in a beautiful spot in the valley. They have food and beer available -- worth a stop before you start climbing!
Once you leave the hut the real climb starts.  You weave through the valley and some cow pastures and have a clear view of the trail up the mountain. 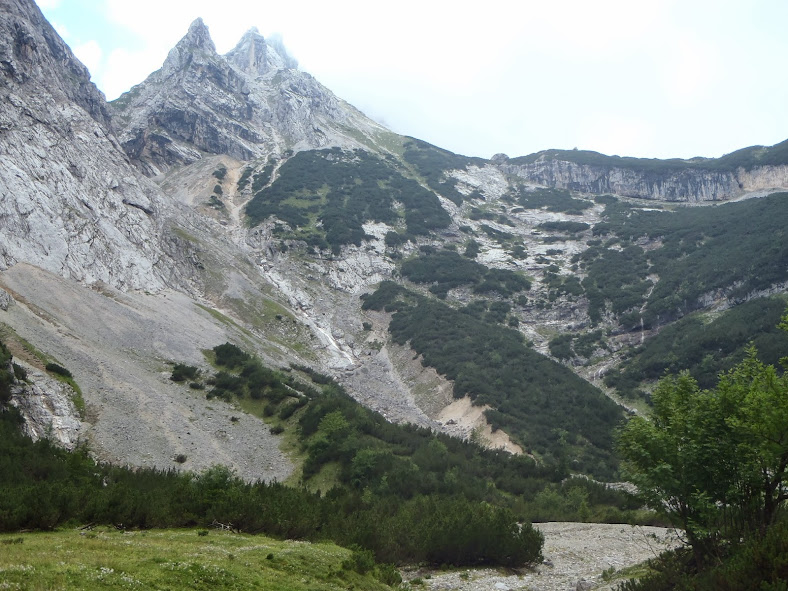 As you climb up, the views really get spectacular. 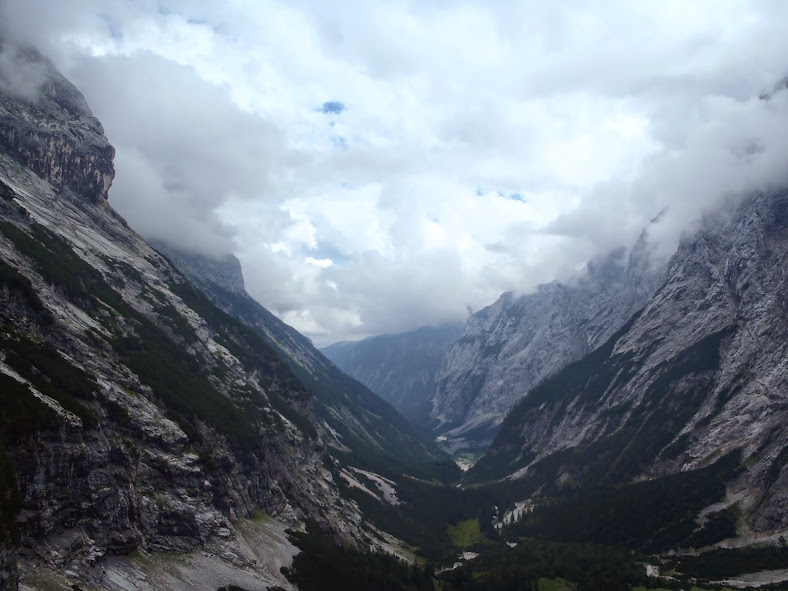 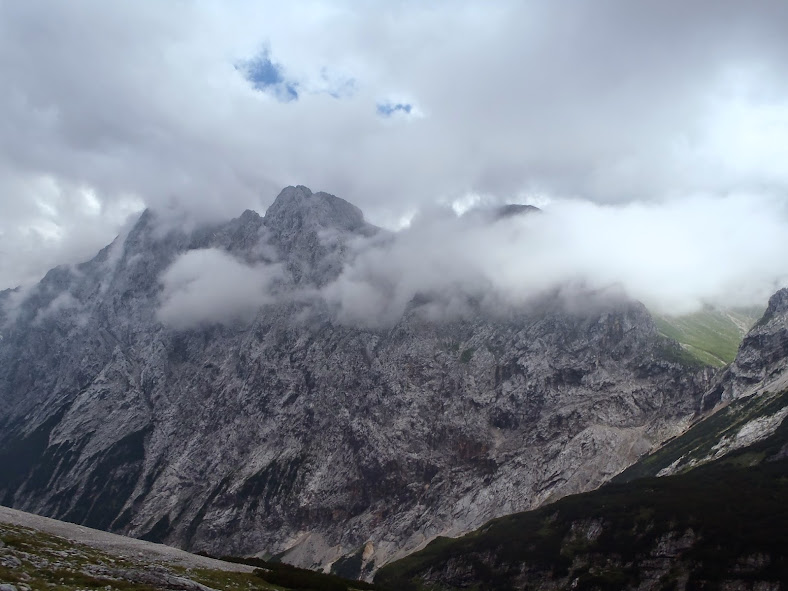 At one point the trail splits. We went to the left, but I don't think it really makes any difference.  I think each way just provides a different path up the ridge -- but to my knowledge, neither route is much different.  The two paths come together at Knorrhütte! 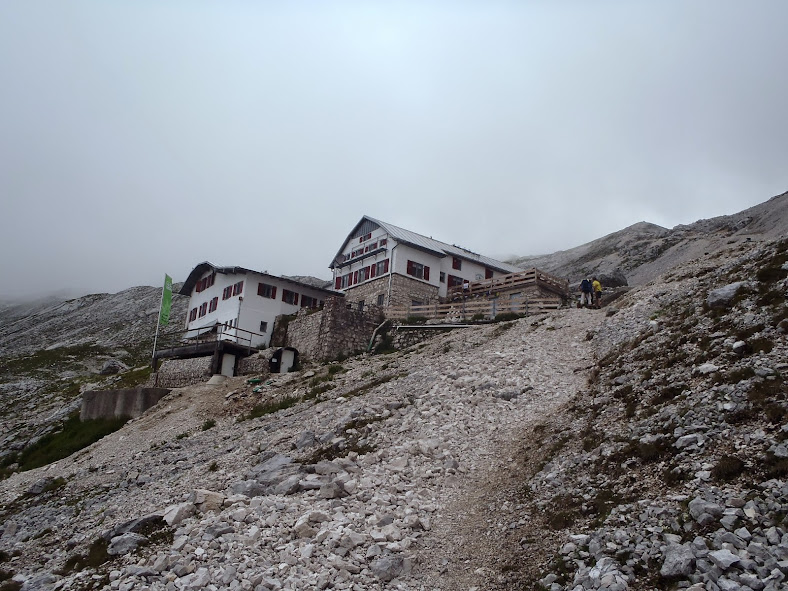 We got here around 4pm.  It was tempting to keep on going to the top, but the weather looked to be turning stormy and we thought we had a better shot for good weather in the morning.  The hut (at least by U.S. standards) is very nice.  Dinner and beer are served, and there are bunk rooms which have blankets and sheets provided. We didn't bring any sleeping gear, although I think in the future I would bring a liner.  Breakfast was simple but adequate, and they had a bunch of board and card games available to pass the time. I would recommend staying at the hut!
The next morning we woke up and (with everyone else in the hut) continued our climb up Zugspitze.  As the hut is basically carved in the mountain, you start gaining elevation as soon as you step out the door. 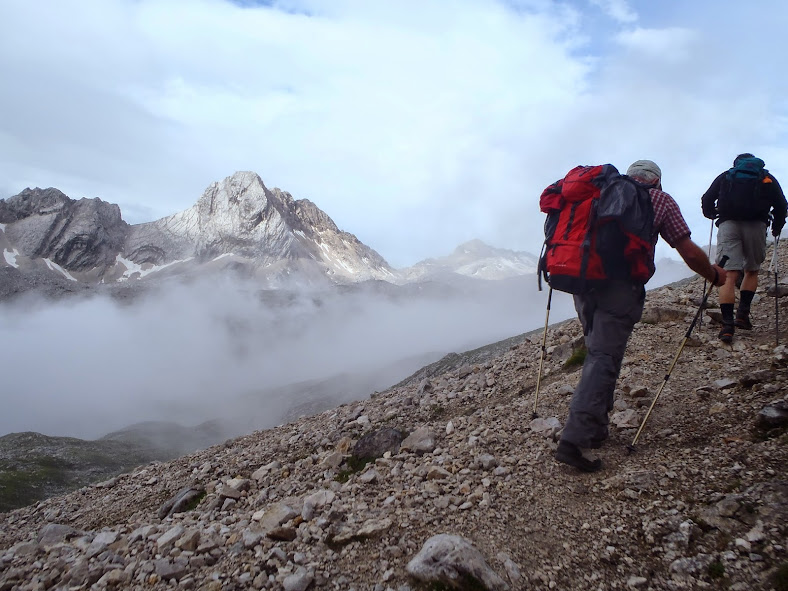 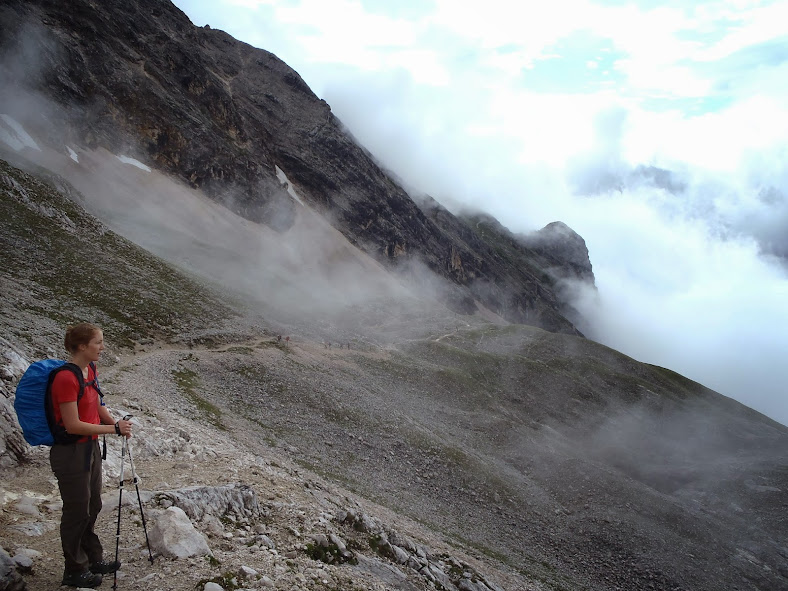 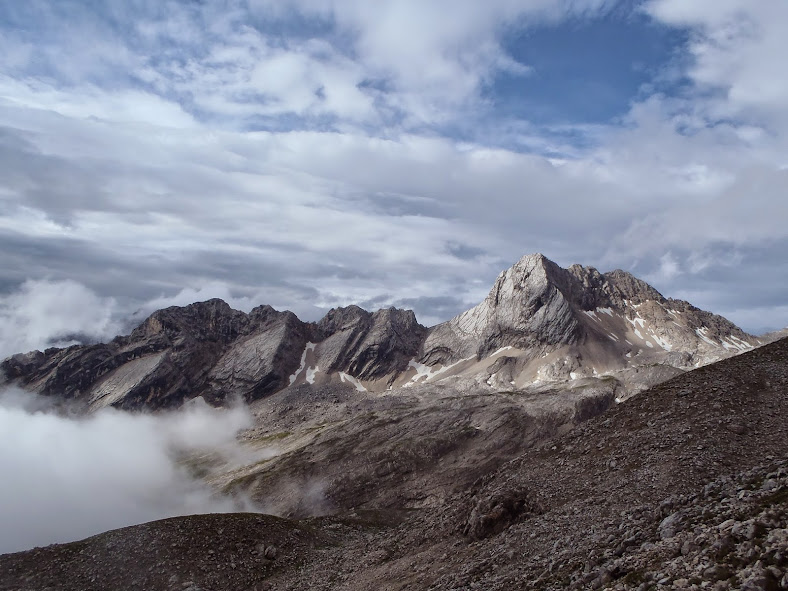 As you start to get higher you pass through some patches of snow, but (in July) we never needed extra traction -- boots were fine enough. 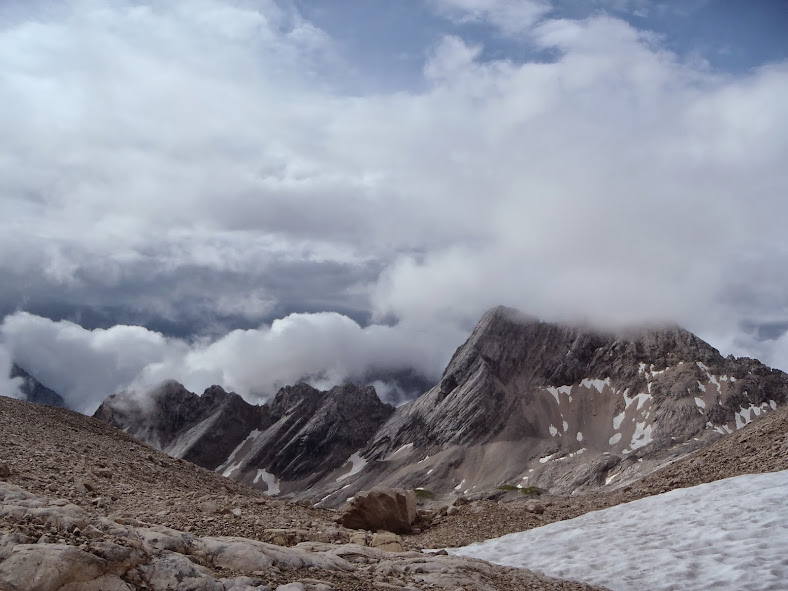 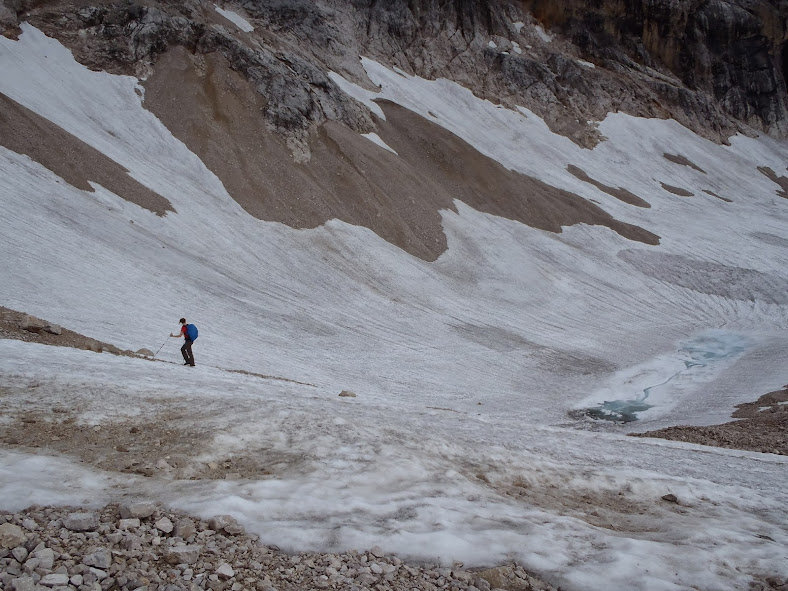 Eventually you start to see ski lifts and an observatory on the mountain to the right. At the bottom of the ski lifts you make a right turn and head up the steep slope just to the right of the observatory. The path is clear, but this was the most scrambly part of the hike. It is a steep path with a lot of small rocks/scree. 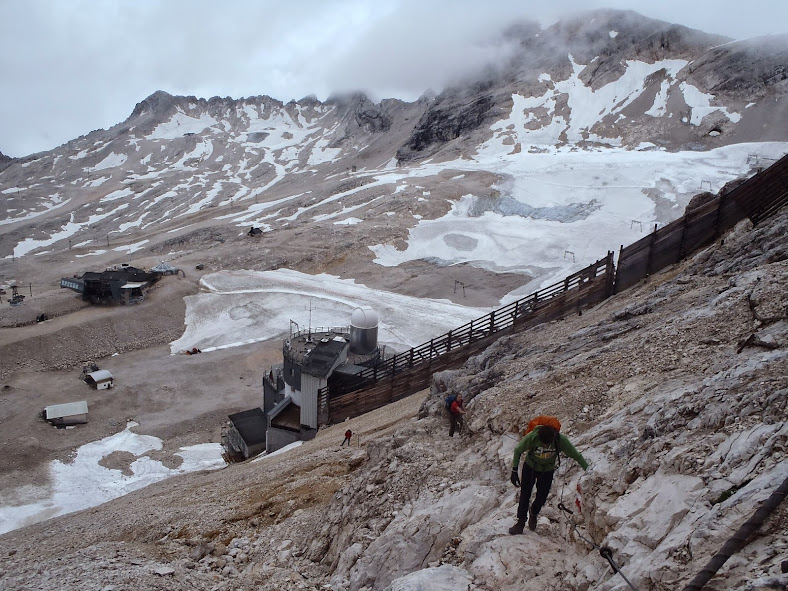 There are some cables as you head up, although there is no need to clip in.  It does make for an exciting hike though! 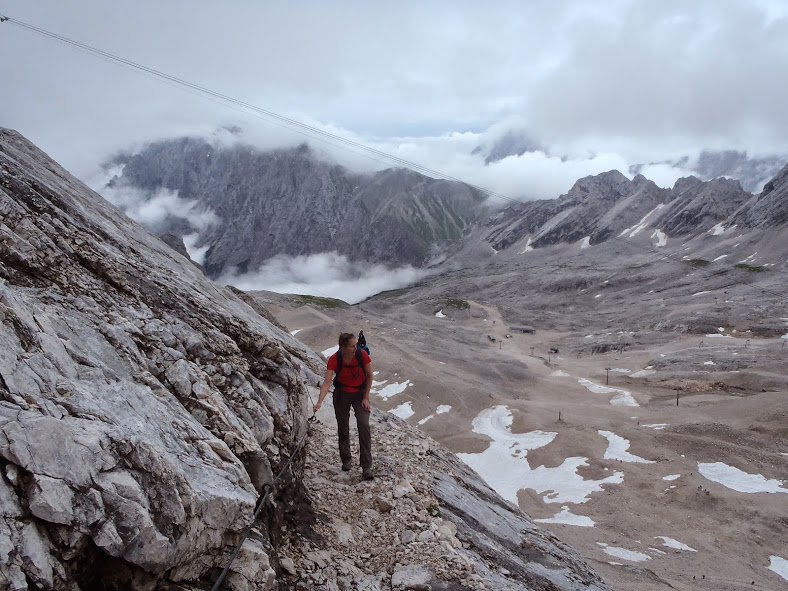 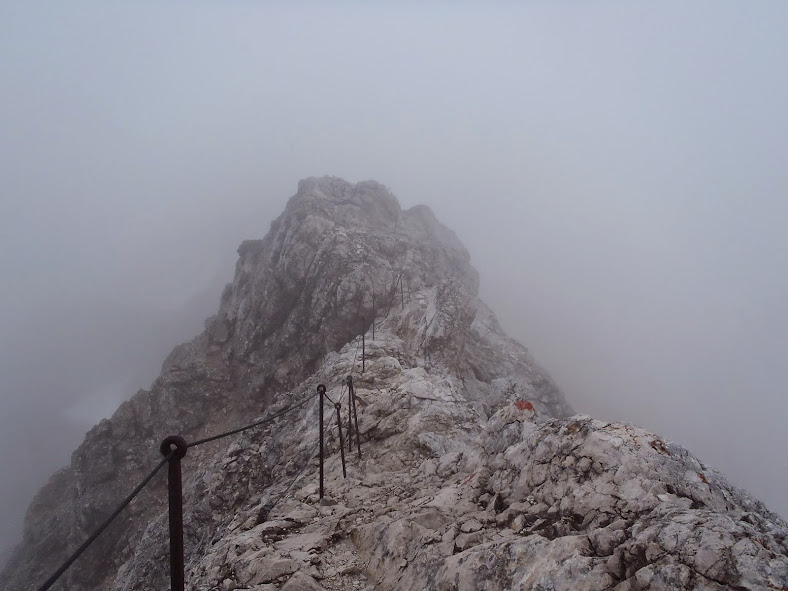 You even brush up against the border of Austria, which is pretty cool! 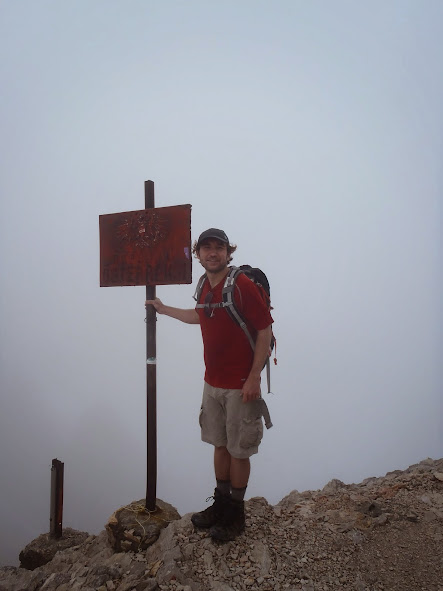 Although it feels like you are at the top (and most of your elevation is done) you still have another 10-20 minutes of traversing before you hit the summit buildings. 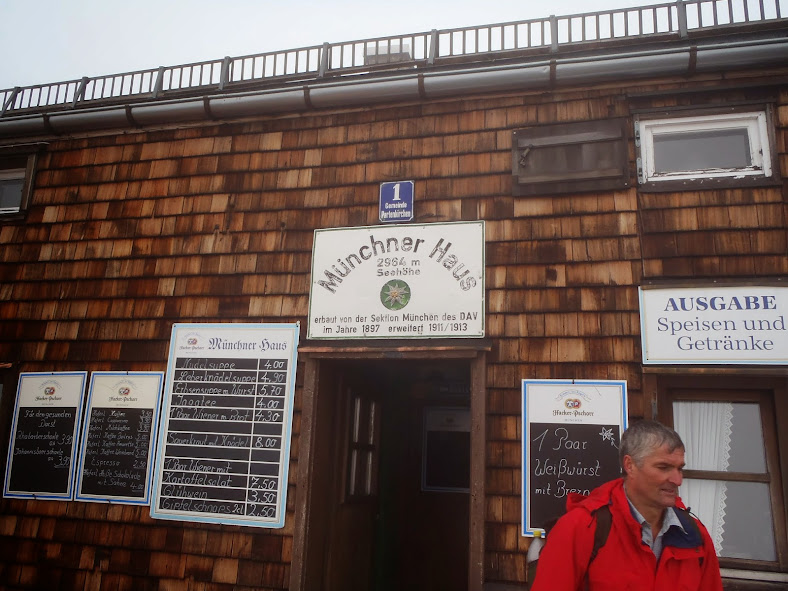 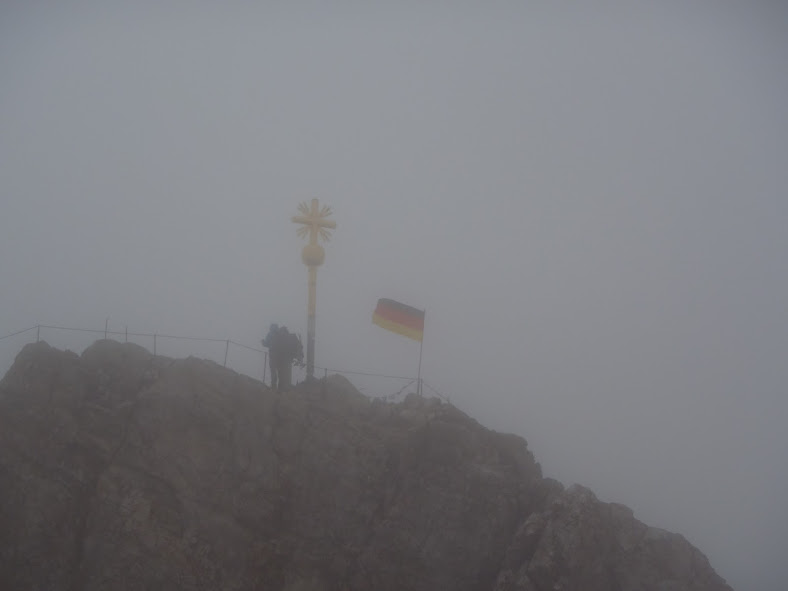 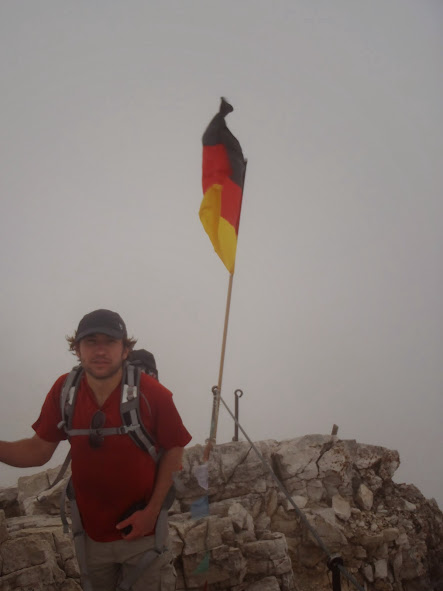 Zugspitze Summit
The summit is a bit of a zoo! There is at least 1 restaurant, full espresso bar, a beer hut, gift shops, and more. The cable car (and train) both take visitors to the summit, so you will see a lot of people.  I didn't mind though -- it was fun.   We reached the summit just as the rain was coming in. It would have been an easy hike down (we estimated about 6 hours for us), but with zero visibility, rain, thunder, and chilly temps...it didn't make a whole lot of sense. So we took the cable car down, and then the train to Garmisch-Partenkirchen. From there it was about a 20 minute walk back to the Olympic Stadium.
Links:
Knorr hütte: http://www.davplus.de/knorrhuette
Personal Site with gpx, kml files: https://sites.google.com/site/nctriplogs/trips/zugspitze-via-reintal