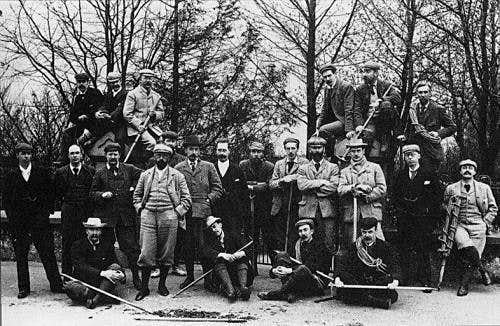 The Scottish Mountaineering Club 1896 Easter Meet, Fort William This is a great group photograph, containing such SMC luminaries as: Naismith, Douglas, Raeburn (cross-legged, right), Hinxman, Thomson, Rennie and William Inglis Clark (the trio sitting on the left-hand gatepost include Naismith [centre] and Clark [right]). As to the doings of this meet, it was a classic, with five ascents of Tower Ridge, and, on Friday, 3rd April, the first winter ascent of the North-East Buttress, by Willie Naismith, W. Brunskill, A.B.W. Kennedy, William Wickham King, and Frances Conradi Squance. Your man Raeburn was a guest at this meet, and began his Nevis routes with an ascent of the Direct Route on the Douglas Boulder. The Boulder (a mere 700ft in height) was of course named after Willie Douglas, the ever-popular Editor of the club journal, from 1892 to 1909. Present: Sitting: Howie, ?, Boyd, Raeburn, ?. Standing: ?, Maclay, ?, Phillip, ?, Hinxman, Thomson, ?, Rennie, Douglas, Squance. Gateposting: ?, Naismith, Clark, King,?, ?. Info provided by The Scottish Mountaineering Club
« PREV NEXT »