Tower Ridge is Ben Nevis’s most famous ridge, descending approximately 600m down the north side from close to Ben Nevis’s summit. It’s widely regarded as the finest winter climb in the UK with a variety of walls, ridges, and traverses. It’s a long day out and an early start is essential. The route can be climbed in either summer or winter although the latter is considerably more popular when parties attempt it daily.

The route is generally considered to be somewhere between a medium or hard Scottish III and an easy Scottish IV depending on who you ask or where you read. The main difficulties are high on the route and therefore it should not be underestimated. Mountain rescue services regularly have to pick people off the upper stretches of the route after climbers have realized that they are unable to complete it. In a nutshell, don't attempt the route if Scottish III is your absolute limit for leading. 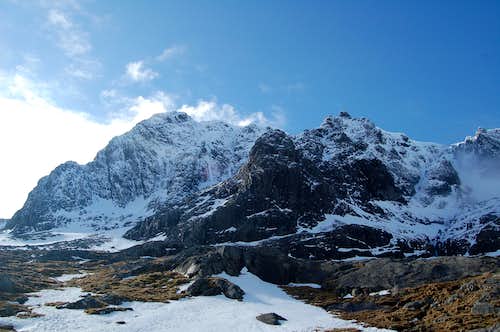 Tower Ridge as viewed from the CIC hut

Next, walk for around 90 minutes (give or take depending on snow conditions) to the CIC hut beneath the North side of Ben Nevis. The trail initially climbs through a lovely pine forest, reaching an upper car park in around 20-30 minutes. A number of years ago, the upper car park was reached by way of a steep and terribly eroded, often muddy, path but fortunately things have improved.

From the upper car park, climb over the style and follow the trail along the Allt a’Mhuilinn stream south-west to the CIC hut. The CIC hut is largely invisible until within close proximity of it. From here take in the wonderful views of Coire Na Ciste. By Ben Nevis standards the approach to Tower Ridge is easy beyond the CIC due to its relatively close proximity and minimal height gain. 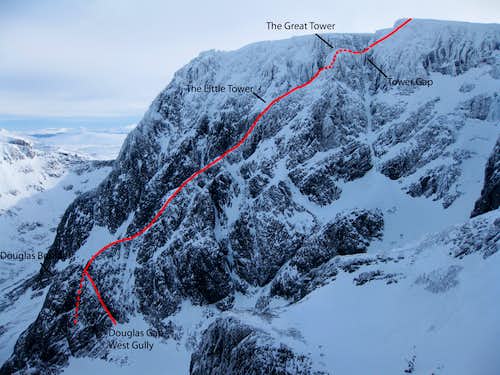 From Douglas Gap a 20m groove/chimney leads to the crest of the ridge, which rises gently to become quite narrow. This same point can alternatively be reached from Observatory Gully by traversing in from higher up over Scottish II rocky steps and steep snowfalls.

From here the route moves out right and up beneath steep rocks until overlooking Vanishing Gully. The route then cuts back left to follow the exposed ridge to beneath the Little Tower. The Little Tower usually requires 3-4 pitches of climbing, starting on the extreme left. The route then levels out before another pitch leads to the foot of the Great Tower.

On the left side of the tower a very exposed and steeply banked snow ledge (the Eastern Traverse) is followed horizontally left past a slab corner and round an edge to beneath a huge fallen-block chimney which may be covered in snow. This traverse is the first of two crux pitches. The chimney is climbed via a series of steep walls and ledges to the top of the Great Tower with some difficulty. 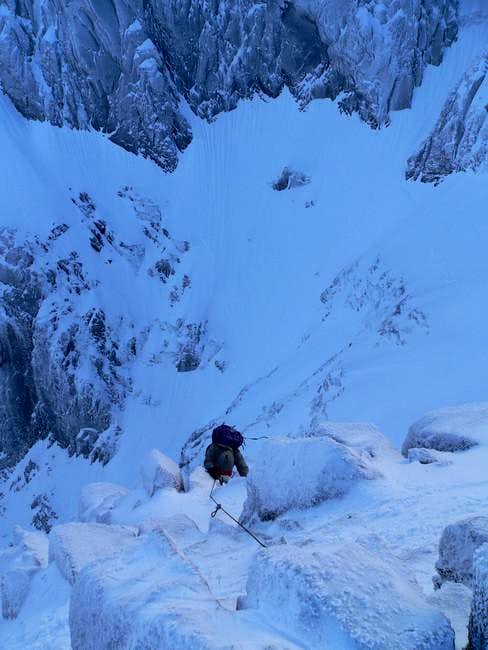 To avoid the difficulties higher it is possible to continue the Eastern traverse beyond the foot of the chimney to an exposed and steeply banked snowfield that traverses to Tower Gully. This is a good option for teams who are late or tired. From Tower Gully its possible to descend towards the CIC hut by first traversing across to the Gardyloo Buttress and then down Observatory Gully.

The Western Traverse (IV, 4) offers a more difficult alternative to the Eastern traverse and also avoids the queues here.

Follow the very narrow and exposed crest towards the Tower Gap, descending slightly. Climb down the gap via tricky and loose ground. Tower gap marks the second crux. Either ascend the far wall or move left to belay beneath an icy slab. Ascend via a sequence of difficult moves over slabs, ledges and chimneys until the angle eases and the last difficulties are over. Climb the final section of the ridge to the plateau, moving right beneath a steep wall at the top. 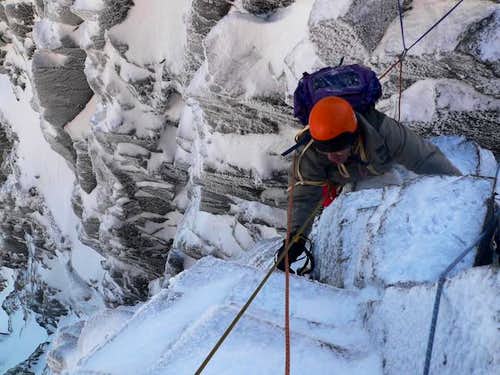 See the main Ben Nevis page regards descent routes. All are reachable from the top of Tower Ridge. I'll add descent info here also over the next few days.

There are three main routes of descent. Which one you take largely depends on what the weather and snow conditions are like on the given day. The shortest way is not necessarily always the easiest and in really bad conditions the best way off the mountain is sometimes via the Red Burn mountain track. Conditions can be fierce on the summit plateau so have in your mind your preferred method of descent upon topping out. If descending back to the North side No.4 Gully and the Carn Mor Dearg abseil post are equidistant. Alternatively, use the Pony track that descends the south side.

This is the easiest way down the mountain.

Reaching the mountain track from the Summit 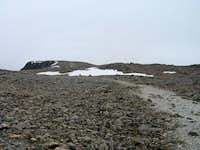 Follow a grid bearing of 231° for 140m from the summit shelter or 150m from the summit trig point (use a rope to measure it if you are not sure of your pacing) GPS NN16558 71180. This will avoid the steep drop of Gardyloo Gully close on your right. Then follow a bearing of 282° (grid). GPS NN 15721 71384 to the 1200m contour. Don’t forget to convert your grid bearings to magnetic (approx. +4° in 2002). On the second bearing you should reach a short steeper section after 300m and continuously steeper ground after 900m of down hill travel. At this point the ‘Mountain Track’ route meets the plateau. Continue on down a steep but easy slope, for another kilometre on the same bearing or GPS NN14756 71865, then turn north towards the ‘Halfway-Lochan’.

N.B. Along this route it is important not to stray left (south) in the first 2km, as this would lead to the steep and serious ground of ‘Five Finger Gully’. The steep lip of this gully is 800m (approx) from the top of Gardyloo Gully. Accurate pacing and compass work is an essential skill for all people climbing on Ben Nevis. If after 800m on the recommended bearing you encounter steep ground and cliffs dead ahead you are advised to try and avoid them by going right (North) until it is possible to continue on the bearing (282 deg grid). This may require that you travel uphill for a short distance to skirt the top of ‘Five Finger Gully’.

Reaching the mountain track from number 4 gully (see below)

A compass bearing due west from the lip of this gully (270° grid) or GPS NN 14756 71865 is a descent to Glen Nevis, via the Red Burn mentioned previously. (Info from Alan Kimber website)

This easy snow gully offers a straight-forward descent to the CIC hut to the north in good visibility. The top of the gully has a metal marker post with the number 4 drilled into it (GR 158717 – GPS NN15821 71733). Sometimes the cornice can be a problem necessitating an initial snow bollard abseil but usually there is a section of cornice dug out from below. Also, it is possible at times to move a few meters to the north, along the rim and gain access to the gully down steeper ground. Avalanches have occurred in this gully and the initial entry can be steep, but it soon eases.

Only two of the higher posts remain and with care the person experienced in negotiating steep grade 1 ground in descent will be able to move down easily into Coire Leis. Often it is easier to traverse left (west) towards the Little Brenva Face, before descending. However, snow build-up will dictate the easiest and most obvious route down. The angle is steep at first, but eases after 150m.

From the summit shelter a bearing of 134° (grid) GPS NN16897 71017 should be held. Initially the ground will be flat. After 100m the gradient becomes abruptly steeper and some short posts may be seen; keep these to your left (north-east). From the steepening ground after approximately 200m of descent a slight col will be found to the left (east) half a kilometre from the summit. At this point is a metal sign (GR 171710 – GPS NN17099 71005) with information relating to the ‘Abseil Posts’.

- Nuts, hexes and slings are best for this route. Bring a light rack in order to move quickly
- Ice screws are of limited use
- Technical ice axes
- Crampons

Hi, Under 'External Links' could you please update the URL for West Coast Mountain Guides to: http://www.westcoast-mountainguides.co.uk/category/news/ Much appreciated! Ken Applegate