A long day in the Silvretta Group

A long day in the Silvretta Group

With a group of friends I spent a week in the Silvretta Group near the end of July 2013. Part of that time we hired Hermann, a local guide, so we could go where we otherwise wouldn't. 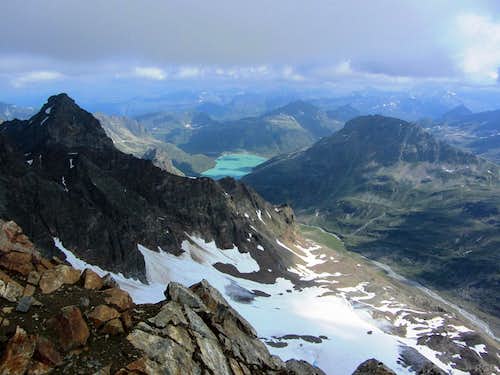 View north towards the Silvretta Stausee from the summit of Silvrettahorn
The longest day of the trip was going from the Wiesbadener Hütte (2443m) to the Saarbrücker Hütte (2538m). Now, the easiest way to do that isn't hard at all: hike down to the Silvretta Stausee (2039m), then hike back up the Klostertal and go over the Litzner Sattel (2737m), for an elevation gain of some 700m, and no glacier to cross. But we don't need a guide to go hiking, and besides, I estimate that this wouldn't take much more than half a day. We wanted more.
Hermann knew that, naturally, for we've been climbing with him in different parts of the Alps every summer since 2007. No, he had planned something else all along: We would start with a traverse of the Silvrettahorn (3244m), and then take the long and scenic way, up and down, over what seemed an endless series of saddles, before finally arriving at our destination. 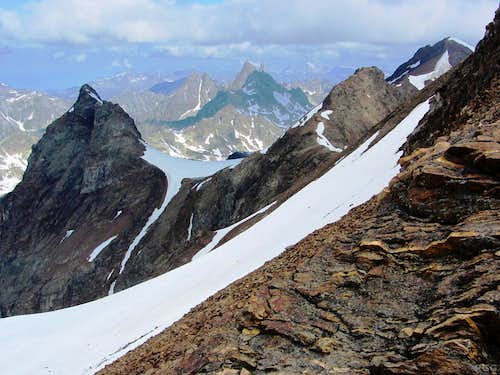 High on the south side of Silvrettahorn, we can see the distant peaks of Gross Seehorn (3120m) and Großlitzner (3109m). The latter looks like a finger pointing straight up into the sky, Gross Seehorn is immediately to its left. It shows that we still have a long way to go today: our destination, the Saarbrücker Hütte, lies right next to these distant peaks.
We started out even before sunrise. Partly that was because we knew it was going to be a long day, but also because we were in the middle of a heat wave, and every afternoon dark clouds had been building up all around us, bringing the threat of rain and thunderstorms. Sure enough, today the clouds came again, and this time rather early. By the end of the morning it already looked like we might not keep it dry.
But soon after it proved to be only a hint of what might have been. The clouds eased up, and we started hoping that we might stay dry after all. For most of the afternoon, it stayed dry, with sunny spells followed by more cloudy episodes. And just as we thought we might make it, with less than half an hour to go, it started to rain. Not hard at first, but enough to make us put on our wet gear. By then we were on relatively easy terrain, so I shifted to a higher gear. A good thing too, for I reached the hut right as the heavens opened. 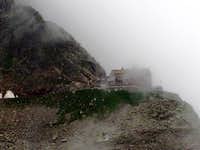 Arrival at the Saarbrücker Hütte as the heavens are opening


Google Satellite view of Silvrettahorn, dead center, clearly showing  the three main ridges and the glaciers surrounding it on all sides.
On our traverse, we climbed it from the south and descended via the NW ridge. Switch to Terrain or Earth for a different perspective.