A Whim Till Jim Hill

The TR title says it all. Well, sort of. OK, not the whole story.

Last year, I found myself looking for new peakbagging goals to kill the time. Basically, obscure peakbagging ideas floated around my head.

I then summited four Arizona P2Ks in January during one weekend, to raise my total to 93 USA P2Ks. But afterwards I had a P2K dry spell for two months, so entering April I still needed seven more. I set a new goal of getting at least six more P2Ks during an eight-week span between April and May... which was a lofty goal considering we tend to have poor weather during those months. Fortunately, our weather every weekend during this timeframe ended up being very favorable to local peakbagging, allowing me to summit a P2K for five consecutive weeks. This left me with only needing two more to reach my obscure goal of 100 USA P2Ks. Not wanting to waste #99 on a lame lowland, private property, and/or road-walk P2K, I set my sights on Jim Hill Mountain near Stevens Pass.

I asked several people to join me, but nobody seemed interested... at least initially. As luck would have it, the avalanche forecast in the North Cascades and South Cascades spooked some people who wanted to go into the mountains, and somehow I was able to convince fellow SP members Gimpilator and Josh Lewis to join me. I do not think either person was excited about a mountain with the word "Hill" in the name, despite the name being a reference to a historical person's last name rather than a description of the terrain.

Our Route
Using route information I had been given by skiers and friends, we ascended from the northeast, via the Henry Creek drainage. It was ridiculously easy and straightforward going through the forested sections until ~3900' elevation, when the forested opened-up to a large basin. This basin had snow-covered slide alder near the bottom and a neat little waterfall near its top, which we just circled around its right side to get above it. 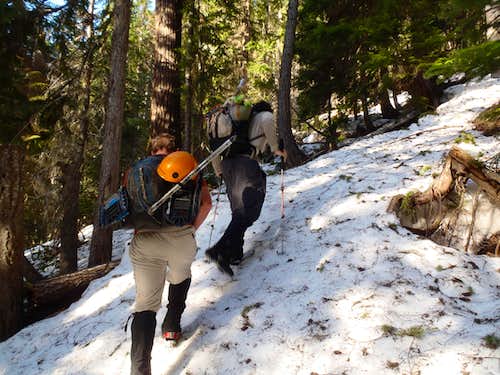 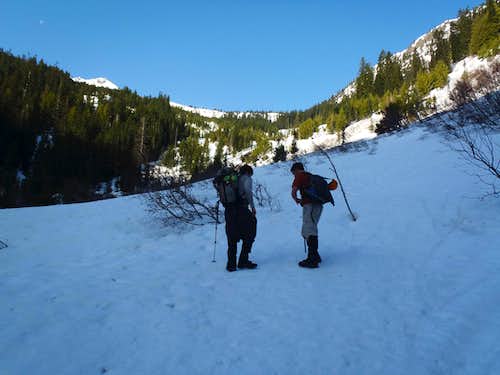 At The Slide Alder Basin
After passing through a grove of evergreen trees, we reached a large open upper gully at ~4800' elevation. We ascended the large open gully without much difficulty. The ascent was fairly straightforward, with our general route in the direction of the false summit looming ahead of us. 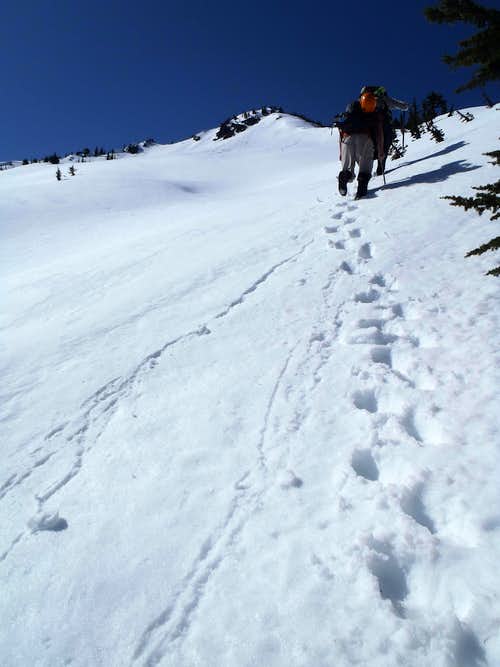 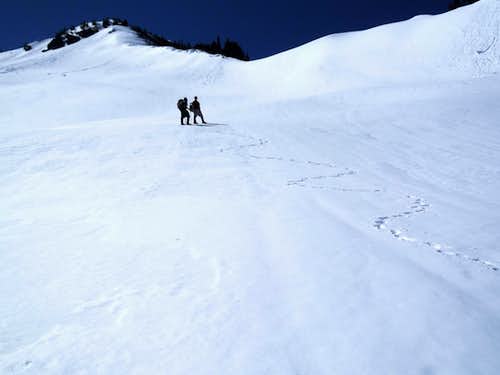 Near Top Of Open Gully...
We aimed for a small north ridge saddle to the right (north) of the false summit hill that was staring at us the whole time. Once at the saddle, we went across the north ridgeline until below the upper summit ridge saddle/notch located between the false summit hill and true summit hill. Getting up to the summit ridge saddle/notch was easy, too. In fact, the route had been so brush-free and straightforward that it seemed to totally surprise my teammates. They also really liked the vast north-facing views from the upper route, too. As Gimpilator prematurely proclaimed, our ascent and goal were "easy" (a phrase he commonly says before bad things happen). 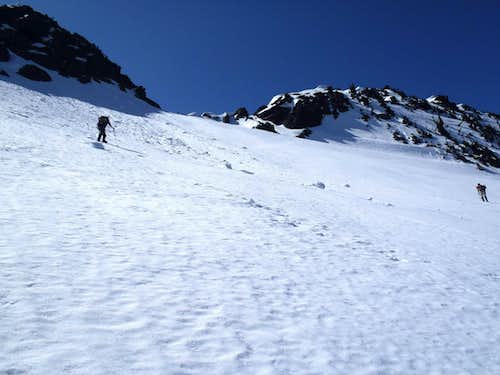 Approaching Jim Hill's Saddle...
But that is when the real fun began. The Class 3 scramble section was a mixture of dry rocks, wet rocks, loose rocks, and snow. Throw in a few knife-edge ridges and we definitely each had some hesitation about attaining this summit. Gimpilator made a futile first attempt to ascend this section, but the combination of steep snow and slick loose rocks was not appealing to him. This is where Josh really stepped up and saved the day. He volunteered to lead from this point, but when Josh said "it doesn't look good" several times we knew it must really not be good. 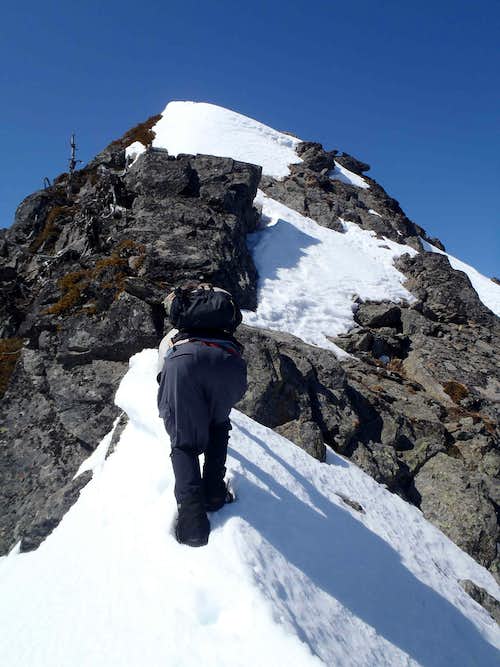 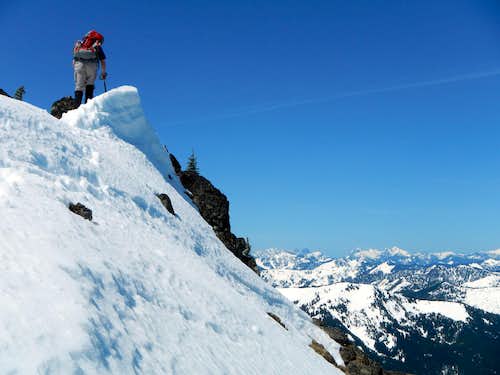 Me, Ascending The Summit Ridge (Photo by Gimpilator)
However, each time Josh thought we could not continue along the ridgeline he concentrated on finding a better way and did so. I then followed second, and then Gimpilator. This was one of the few times I was less sketched-out by terrain conditions than Gimpilator... It's funny how different types of terrain can bother different people in different ways. (However, it is worth stating that I was a tad sketched-out during the descent; the melting snow was breaking off and exposing steep rocky terrain on the summit ridge where a fall was very possible.) 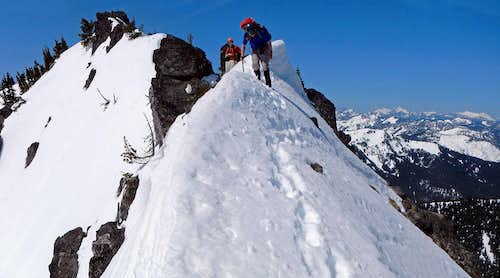 Josh and I, On The Summit Ridge (Photo by Gimpilator)

From Whim To Reality 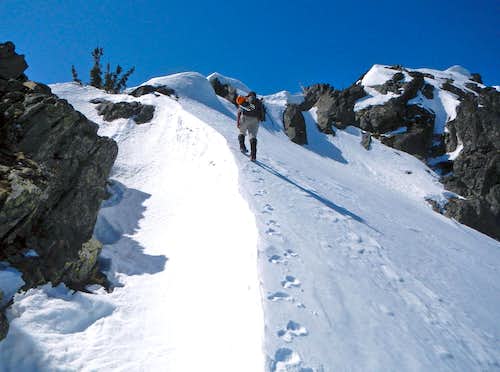 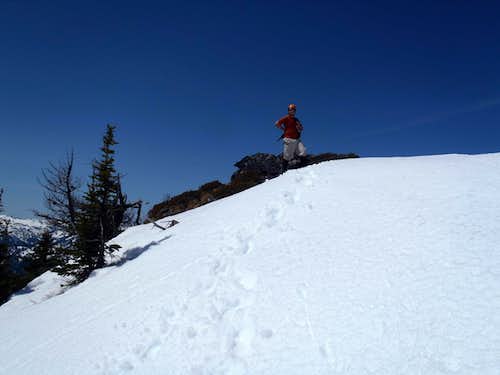 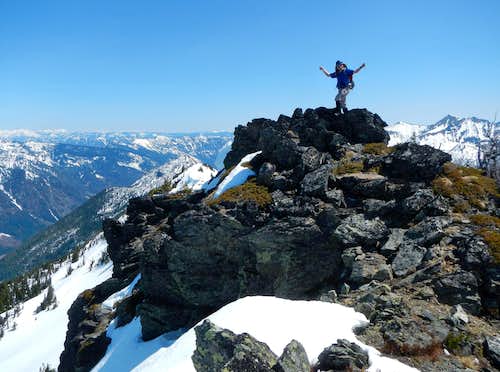 Me, Doing A Whimsical Summit Dance (Photo by Gimpilator)
It took us 40m to get from the summit back to the saddle/notch, if that gives any sort of indication on conditions. We were mostly concerned about the melting of the snow atop the sumimt ridge rocks and snowy knife-edges. The rest of the descent from the saddle/notch was very straightforward, with Gimpilator and I glissading down most of the large upper gully until ~4600' elevation. 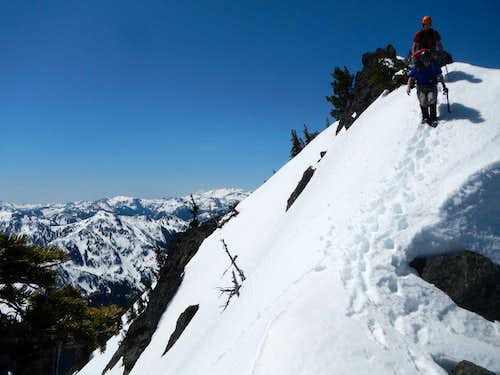 Josh and I, Descending From The Summit (Photo by Gimpilator) 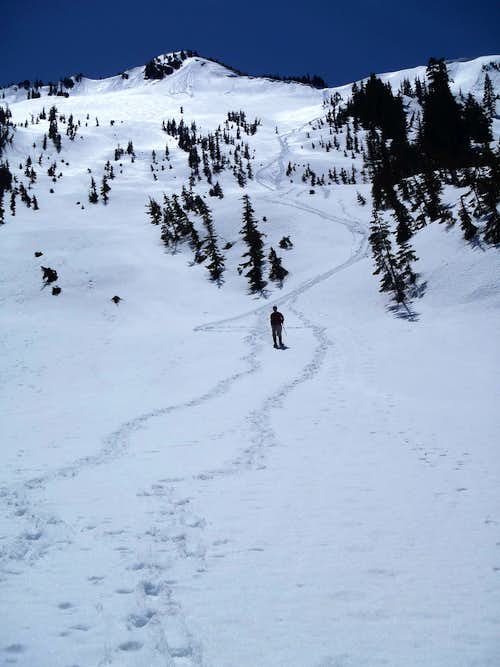 Looking Back At Our Glissading and Hiking Tracks...
When we were most of the way through the lower forested section, I suddenly realized I had lost my trekking pole that had been stashed on my backpack. It must have gotten snagged on a tree or something, and fallen out. With Gimpilator's OK to do so, Josh and I spent an hour backtracking to locate trekking pole but could not locate it. We determined that the trekking pole must have fallen out somewhere between 4100'-4600' elevation, between the slide alder/waterfall basin and the bottom of the open upper gully.

We got down to the car only 4h0m after we left the summit, although exactly 1h0m of that was spent looking for my lost trekking pole. This completed my 99th USA P2K, which also represented the near-completion of an idea which seemed like just an unrealistic whim a few months earlier.

A Goal Ends With A Bang, Not A Whim-per

My 100th USA P2K was reached slightly more than one month after my trip to Jim Hill Mountain. My 100th USA P2K occurred as major non-camping ascent of Mount Baker, where I also completed several peakbagging lists at the same time. That trip is described in a trip report on this website.

Nice TR and I love the shots of the rige traverse. Might have to give this one a try.