Ah, there is a route marker again - now how do I get there? 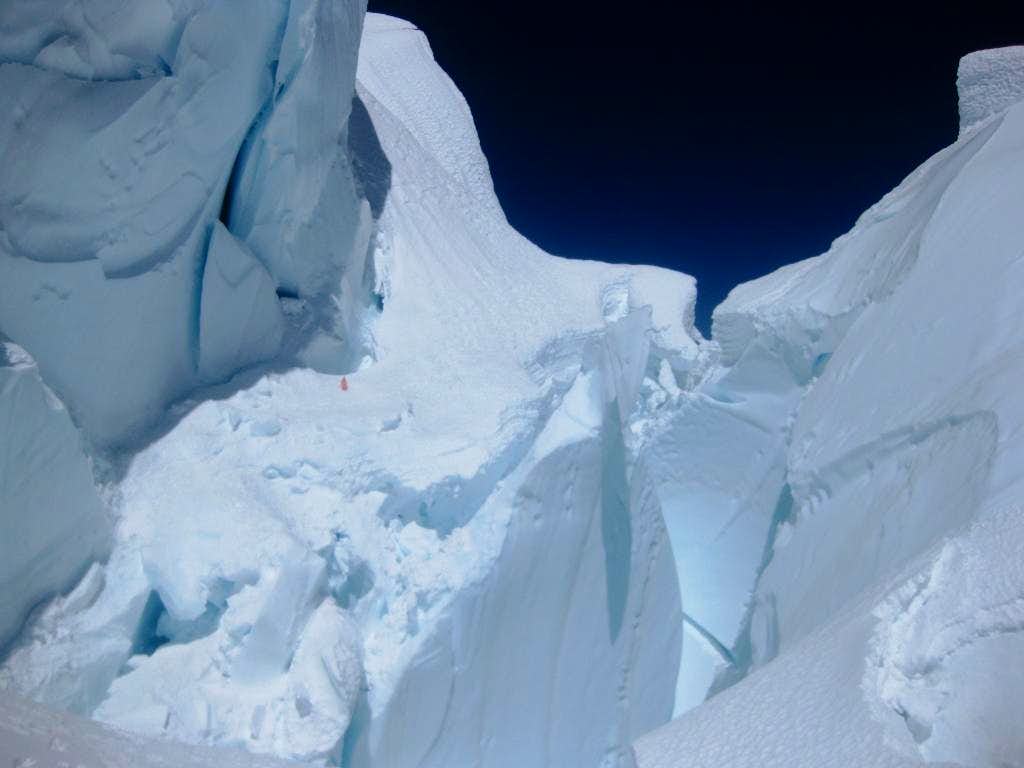 This is around 6200m, on the summit route to Huascaran Sur. I have to say thanks to whoever found and marked the route this year. Without a trail and these markers to follow, I probably would have spent forever trying to find a way, and probably would have searched too far to the west. On my first attempt, a month earlier, although we had clear views at 6000m, on Garganta, a few hundred meters higher the mountain was in clouds. Being optimistic by nature, I continued, hoping they would lift a bit. They didn't. By this point, getting from each marker to the next was already a small adventure: only after following the trail for a bit, the next flag would come into view. Sometimes the snow was hard and the trail vanished, making the search for the next marker even more interesting. I apologize to those that may have tried to summit the next day, because I may have added a few false trails myself. Past this marker, the route goes left, up the steep slope. Not much choice in the matter, with or without a clear trail. Even in poor visibility I could go on. Some 100m higher, there was no clear trail anymore, and no obvious route either. That was the end of the line back then. As I would learn today, on my second attempt, it would get quite a bit steeper still. I saw another flag high above the crux, and small bits of snow came trickling down, betraying the presence of other climbers up there. However, the first time around, I couldn't see that and turned back. I weighed my options and reckoned that it was too dangerous to continue. First of all, even though I saw no alternative, the steep slope might be the wrong way, so if I kept going, I might get lost. Secondly, I could't see the end of it, and it might get even steeper, past my comfort zone. And, finally, I knew that, once past the technical difficulties, the huge summit plateau would be almost impossible to navigate without a clear trail or good visibility, and following a trail would also be a lot safer, considering that I knew there would be crevasses up there. By the way, although this photo suggests otherwise, it turned out to be an easy scramble to get to that flag. 8 August 2011.
« PREV NEXT »

Is there a mutated strain of contagious summit fever on Huascarán? - Four months in Peru, Part XII(Trip Report)