We had arrived in Solda, at the base of the Ortler, two days ago.

Next morning, after some shopping, we went to the mountain guides office to enquire about the conditions around the Cima Vertana (Vertain Spitze in German) and the Croda di Cengles (Tschenglser Hochwand). We figured that that would make a nice tour.

We learned that a traverse of Cima Vertana would be beyond our capabilities, but climbing it from the south shouldn't be a problem, and after retracing our steps just a bit, we could go to the Rifugio Serristori (Düsseldorferhütte), and tackle the Croda di Cengles the day after.

Cows on the snow line 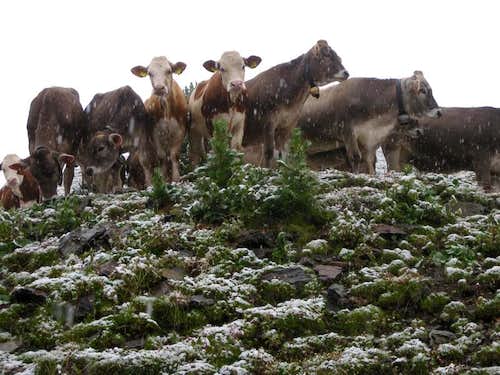 The locals
But I'm getting ahead of myself as this was all just preparation. Today was our first day, on top of that it was rainy, so we drove to the other side of the mountain, hoping for better weather. Alas, it was just as wet there.

That didn't stop us, we just hiked for a couple of hours up to the snow line and back, and in the process I field tested my new rain gear. At the end of the day I was quite happy about that, it kept me dry all day, much better than my old jacket!

To get back to our hotel, we drove around the mountain again, only to come to a standstill just a few bends below the Stelvio pass. Although the pass wasn't closed, a fresh sprinkling of just a few centimeters of snow meant that our car just wouldn't drive uphill anymore!

Luckily, there was an alternate route, so with a delay of 45 minutes we got back to Solda after all that day. This should have been a warning of things to come ... 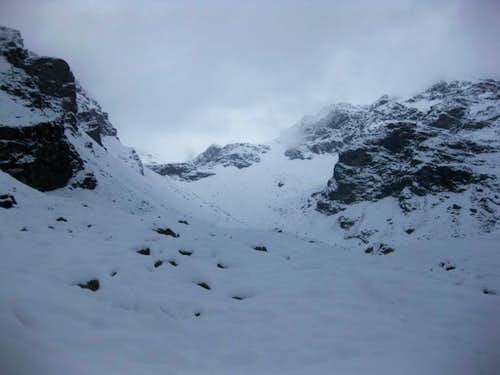 Cloud cover
The next morning, we slept in. The weather forecast had said that it would be a bit rainy in the morning, but the clouds would lift during the day. So, why get out of a perfectly nice warm bed early?

Around 10 we were on our way. Plenty of time, we thought, since we estimated that we would need about eight hours today.

The first two or so, we made good progress. By now we had reached the snow line. The clouds didn't seem to budge, but we had some time to go yet. Visibility was good up to about 3000 m or so.

The trail wasn't visible anmore. That didn't slow us down much, we just followed the Valle di Rosim upwards. 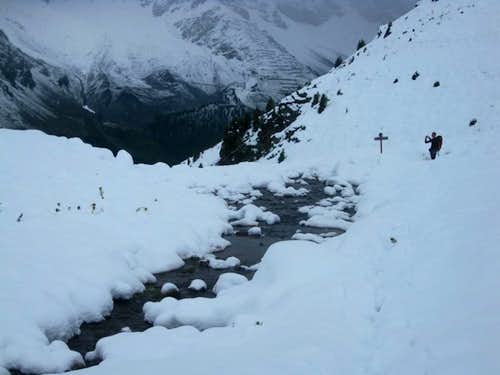 The last sign
At the sign, we encountered a fresh track coming from the left going up the valley, so the going got easier for a while.

A while later we found the makers: two other guys were coming down the mountain. They said they had only just turned back, and sure enough, a short while later we had to make our own track. By now, it was becoming hard work, but we figured, what the heck, this is good preparation for the rest of the week! 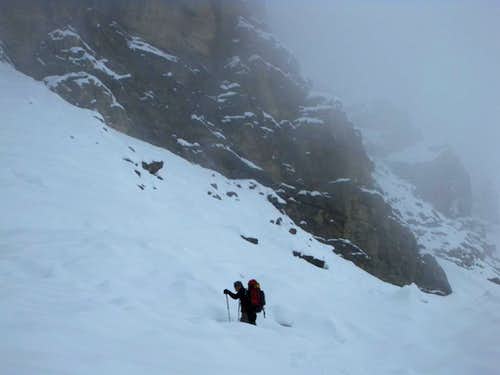 After a really late lunch, at the snout of the small Rosim glacier we reached the clouds. Our hopes that they would lift had been in vain. Alas, no Cima Vertana today.

Instead, we decided go off trail and cross through a high pass over the Rosimwände, which we figured was the shortest route from where we were to the hut. 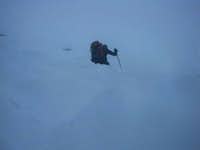 We were now in a large boulder field. Without snow, that would have been easy, but this time it wasn't. The snow between the boulders was deep, so we made hardly any progress.
More importantly, we didn't even notice how slow we really were. Sure, we would be late for dinner at the hut, but we had food with us, just in case, so that wasn't an issue. It was dry, no wind, and we were warm from the exercise, so what's the problem?

It quickly dawned on us: we had to get down from the ridge quickly, or spend the night there, because it would be too dangerous to descend during darkness!

Going back the way we came would take too long, so we looked for an alternative route back into the Valle di Rosim. Basically, every route looked too steep, until we found a snow filled gully that we judged would be possible.
The main problem was that we couldn't see if it went down all the way into the valley. If it didn't, we wouldn't have enough daylight to climb our way back up and try something different. We committed ourselves to the gulley anyway, and hoped it would work out.

We got lucky further down. There was one steep section, but we managed to circumvent this by traversing a bit. Eventually, we found our old tracks in the valley floor just before darkness.

No pictures, because it was dark now. We donned our headlights and hiked down the valley. Somewhere around midnight, I noticed stars coming out between the clouds, so they had lifted in the end. Too late for us though.
We finally got back in Solda in the early hours.

This trip was a useful refresher on things I knew, or should have, and taught me some new lessons as well.

The reason we got in trouble was, to my mind, the result of two mistakes we made:

- First of all, we didn't realise how slow we were actually going up on the snow covered boulder field.
- Secondly, we didn't plan on not being able to find the way down on the other side of the pass, we just thought we'd go down and reach the hut easily.

As a result, we found ourselves high on a mountain ridge in the clouds, with just over an hour to get down so safe terrain.

Sure enough, next morning the sun was out. It was a beautiful day to go out into the mountains! Still, after yesterday's adventure, we took it easy.

The ridge on the east side of the Valle di Rosim was finally clearly visible from our hotel.