All three of the White Rock... 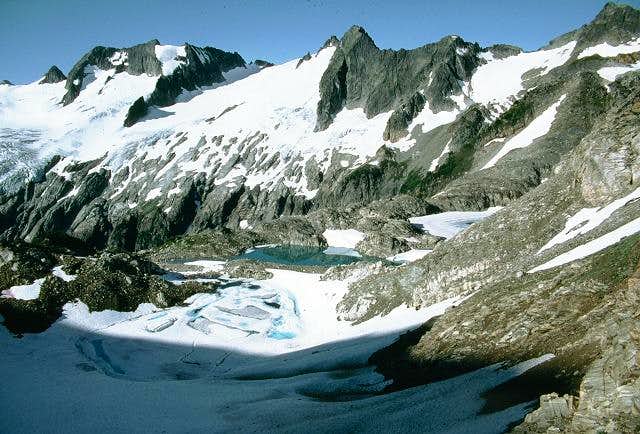 All three of the White Rock Lakes are visible in this photo that includes One-eyed Bull, Spire Col, and Spire Point. The weather was so beautiful that we didn't want to keep going even though we were already late getting out of the mountains, so we decided to camp here, then attempt one of those notorious shortcuts over to the Downey Creek drainage the following day. That left the rest of this day for an attempt on Dome Peak. However, by the time we set up camp and dried out our gear it was too late to summit the peak. But we were able to scout the route to the Spire Col route in case we were to need that later. It turned out to be a useful exercise as we were unsuccessful the following day in finding a decent route down Downey Creek, so returned to White Rock Lakes. But by the following day the weather again turned bad and we had to find our way over Spire Col in another driving storm. August 7, 1988.
« PREV NEXT »