Retezat "aqua-world" - the Bucura cirque
One of the biggest attractions of Retezat Mountains are its numerous alpine lakes. There are close to 100 tarns in Retezat, out of which 58 are permanent. The majority of the lakes are situated between 1900 and 2200 m a.s.l. Below you will find some information about more than a dozen of these spectacular tarns, listed in alphabetical order, without taking the words "lacul" and "tău" (both meaning "lake") into consideration.

The alpine lakes of Retezat received scientific attention already in the beginning of the 20th century. The first surveys were undertaken by Lajos Lóczy, on Bucura and Zănoaga lakes (A Retyezát tavairól, Földrajzi Közlemények, XXXII/5, 1904 - in Hungarian). Later further research was conducted by others, like Ion Pişota and Petru Urdea. Some of the latest measurements can be found in a paper by Vespremeanu-Stroe et al. (Date noi privind morfologia lacurilor glaciare din Carpaţii Meridionali, Revista geomorfologica, Vol. 10, pp. 73-87 - in Romanian).

A few remarks about the metrics given. HEIGHT data is height of the lake plane a.s.l. DEPTH is the maximal depth of the lake. SURFACE area figures given in brackets were obtained by myself using Google Earth satellite images (they can be used as a good rough estimate where no other data is available). All figures marked with asterisk (*) are taken from the aforementioned study by Vespremeanu-Stroe et al., the rest of the data is of older origin. This small lake is hidden in a small depression at the feet of Turnu Porţii and Judele peaks, hardly visible from anywhere but a few places. It is probable that the name comes from the "impossible" location. Many agree that this "hung" tarn has the most picturesque setting among the alpine lakes of Retezat Mountains.

This pear-shaped jewel of Retezat is the second largest lake of the Bucura cirque. It is part of a "lake chain", reciving water from the upstream Florica and Viorica lakes (and their tributaries), and draining down to Lia lake below. Although no marked trail leads to/by its shore directly, it can be viewed upon from the nearby marked trails. Situated below Peleaga and Bucura peaks, Bucura Lake is the largest tarn in Retezat Mountains, and also in Romania. It has an elongated shape in the N-S direction. The lake has its drainage point in the southern side, and is fed by 6 tributaries from all around the other sides. Bucura lake is easily accessible, and in fact, on of the most visited places of Retezat Mountains. Its southern shore serves as a designated campsite, which is usually crowded in good summer weather. The refuge of the Romanian mountain rescue (Salvamont) is located in the SE corner, with water source located a couple of meters away.

There are two lakes sitting below the north face of Vf. Custura, the larger one, with an elongated shape, is called Custura Mare (the smaller one is Custura Mică). These lakes are special because, unlike most of the other tarns in Retezat, they are located on the Southern main crest. Custura Mare drains to Custura Mică, which drains further through Ciomfu Mare lake to the beautiful Ciomfu waterfall and Râu Bărbat river. The lakes cannot be approached on marked trails, but can be viewed upon from Custura peak. This tarn is also member of the Bucura cirque "lake chain". It receives water from the upstream Agătat lake, and drains down to Viorica lake, with a small but charming waterfall. The marked trail from Bucura lake to Poarta Bucurei passes by quite close to its shore, but nice views open upon it from the vicinity of Porţii and Agătat lakes as well. 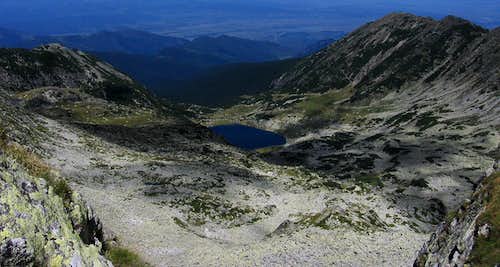 Enclosed by the Galeş, Valea Rea and Mare peaks, this lake is claimed by many to be the nicest in Retezat. Thus, it is a popular destination. Its name means "yearning" in direct translation, the origin of which is not known to me. Galeş has steep slopes and a flattish bottom. It is the third deepest tarn in Retezat Mountains. The name of the lake comes from two rocks (the "Twins") that emerge from it. This alpine lake is located in the strictly protected Gemenele Reserve, so it can only be visited with special permission. It can also be seen "unrestricted" from Bucura and Retezat peaks, although these are just distant views. Bring a binocular, if you want detailed observation of the lake. The triangle-shaped Lia Lake is the lowest situated among the lakes of Bucura cirque. It receives water from the upstream "lake chain": Florica, Viorica and Ana lakes. No marked trail is leading to/by its shore directly, but it can be viewed upon from the nearby marked trails and the higher parts of the Bucura cirque. This lake is situated between Vf. Peleaga and Vf. Păpuşa peaks. It is named after the former, although another name, Tăul Ghimpelui (probably an older name) is also mentioned on some maps. The lake, whose shape resembles an almost perfect circle, is well visible from both summits (but looks better from Păpuşa). It can be approached from the Poiana Pelegii campsite following an unmarked trail, and also by descending from Şaua Pelegii (Peleaga saddle), however such visits are not "legal", as the routes are not official marked ones. Just by itself, the Pietrele Lake would not be a significant tarn of Retezat, but the fact that it is located by the most popular hiking trail (going from Pietrele complex to Bucura Lake) makes it noteworthy. The lake is located below the impressive north wall of Bucura peak, but its name, just like the name of the valley and its creek, comes from another nearby peak, Pietrele (meaning "rocks"). The "Lake of the Gate" has the highest elevation in Retezat Mountains. Its name comes from the mountain passage Poarta Bucurei (Gate of Bucura), under which it is located. This is a wild and picturesque corner of Retezat, worth well to pay a visit. The view of the lake is best enjoyed from the Poarta Bucurei ridge (see the photos here), where you can walk up on a steep marked trail. This small tarn is located under the north face of Vf. Retezat peak. The marked trail from Râuşor complex towards Lolaia saddle passes not far from the lake (with a little off-trail walk one can approach the shore), but the best view opens from the N ridge of Retezat peak (where the marked trail goes). This kidney-shaped lake is another tarn situated within the territory of the strictly protected Gemenele Reserve, and thus, inaccessible directly. However, it can be well seen from both Bucura and Judele peaks. This beautiful alpine lake is located below the wild Porţile Închise (Closed Gates) ridge, between Vf. Păpuşa and Vf. Mare peaks. It is very special because it features a small island. With a little imagination the island resembles a "crocodile head" waiting for its prey. Although there is no real crocodile, neither any other kind of predator living in the lake, all marked trails bypass it. Nevertheless, the view upon the lake from the Porţile Închise is unforgettable. The lake drains down to Râu Bărbat river. This tarn is also a member of the Bucura cirque "lake chain". It receives most of its water from the upstream Florica and Porţii lakes, and drains down to Ana lake. Two further lakes, located a couple of dozen meters south also contribute to Viorica. These nameless lakes are very small in size, but they provide a nice addition to the scene (when viewed upon from above, Viorica and its two tiny companions look like a smiley). The marked trail from Bucura lake to Poarta Bucurei passes by quite close to the shore of Viorica, but nice views open upon it from the vicinity of Porţii and Agătat lakes as well. This circle-shaped lake is the deepest one in Retezat Mountains, and also in Romania, holding approx. 700,000 cubic meters of water. Its drainage point is located in its southern side (the water flows down to Lăpuşnicu Mare river). Close to it you can find the refuge of the Romanian mountain rescue (Salvamont). The eastern shore of the lake is a designated campsite. The lake is accessible on marked trails, but since it lies a bit off from the central region of the range, crowds are not likely here.

Some further alpine lakes which did not get focus here, but of which photos exist on SP...