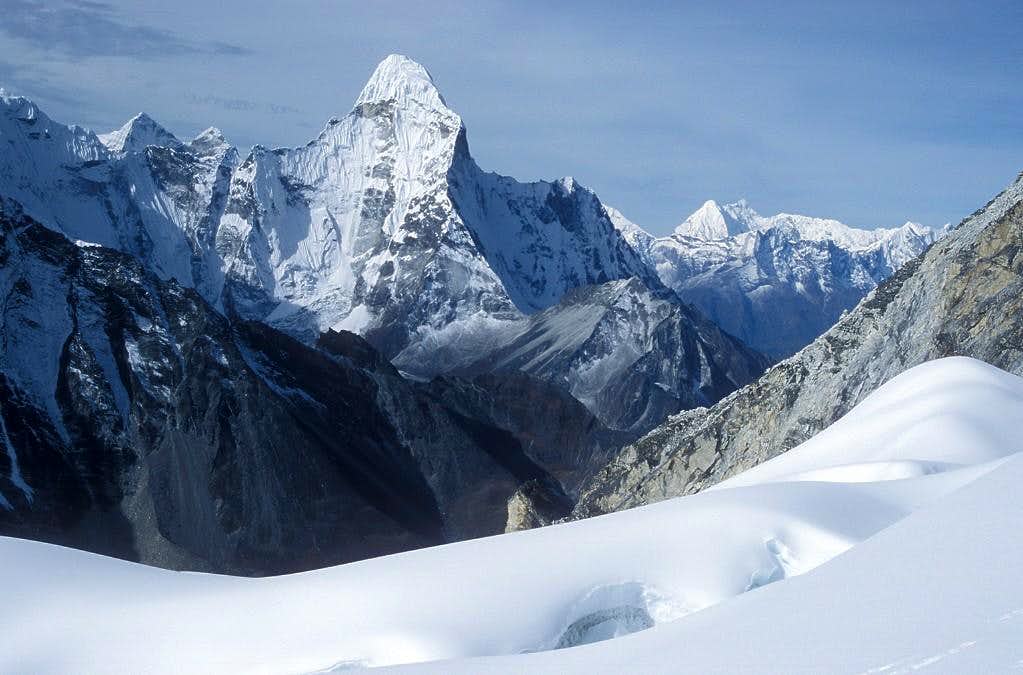 Mathias you're killing me! Beautiful set of pictures! Can't wait for the summer ...

All the splendor of Ama Dablam !

Great shot!! Man, will you look at that arete?!! I wonder if that's been climbed...

What I could find out:

The ridge is north ridge. I've read (Berg 87) about a 6-person italian expedition that climbed the north ridge form 16th to 23rd April 1985. This is not named as first ascent, so the ridge has been climbed earlier than 1985.

The wall is north east wall. This was climbed for the first time from November 30th to December 7th 1985 by the americans Michal Kennedy and Carlos Buhler. The source my book (Berg 88) quotes is "Climbing" 94, 1986 page 20.

Rob Hall as a young man was on a NZ team that made the 2nd ascent in 1980. I think the 1st was a French team not long before that. An Australian team incl. Tim McCartney-Snape climbed it in 1981(?). Another NZ team climbed it in 1999 or 2000 or so. I think there was a German ascent along the way too, so there have been at least 5 or 6 ascents.

Thanks for the photo (to Mathias) and thank you all! Reading this little retrospection of the latest decades of Ama Dablam's history made me quite excited. We simply love this mountain! The black and white design (in my image gallery) was inspired after Ama Dablam. Unique shape!
But less people know the NE side.
And... lovely to hear about poor Rob Hall's great act.(I didn't know!)

Excellent shot of the Ama Dablam !

A lot of thanks for posting.