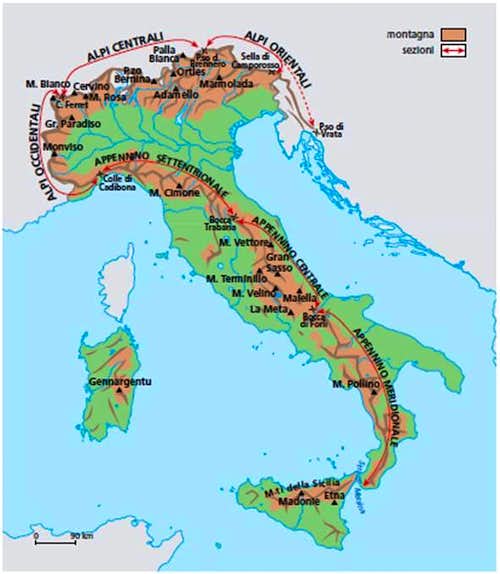 Apennine mountains
The Apennines (or Apennine mountains) are an extremely varied mountain chain which occupies great parts of the Italian mainland. Their latitudinal extension comes to a total length of about 1,500 kilometers, while their longitudinal extension varies greatly, between 30 and 250 kilometers.
The Apennines are generally divided into a northern, a central and a southern area. This differentiation, however, may have rather historical than genuinely geological or geographical origins.
With the exception of the Sila and the Aspromonte ranges in the very south (both consisting of granitic rocks), the major part of these mountains consist of calcareous or limestone rocks and argillaceous shale. The Monti della Laga, one of the central ranges, consists mainly of marl and sandstone. The highest peaks and the largest extension of the Apennines can be found in its central part.

Regarding the classification and subdivision of the Apennines and their mountain ranges it is useful to always keep in mind that classifications are usually made both in a latitudinal and a longitudinal sense.

An exceptional position occupy the mountain ranges of Sicily. Strictly speaking no part of the Southern Apennines, they are sometimes considered an extension of the Apennine mountains of the mainland. They are often summarized as 'Monti della Sicilia' and generally addressed as the Appennino Siculo. This name derives from the Sicels (Latin: Siculi), an Italic tribe which inhabited the eastern parts of Sicily during the Iron Age.

The longitudinal subdivision, i.e. from west to east, also counts 3 different zones: the actual Apennines, the Sub-Apennines and the Anti-Apennines.
The actual Apennines constitute the backbone of the Italian peninsula. They also comprise the highest peaks (total elevations) of the Italian mainland outside the Alps.
The Sub-Apennines are fairly independent ranges and running parallel to the principal mountain chains. In their geological features they often differ significantly from the core regions, and their peaks are mostly lower than those of the more central parts of the Apennines. They cover vast areas of several regions of Italy.
The Anti-Apennines are thoroughly indepedent ranges and separated from the main chains by vast valleys or extensive lowlands. Also for their classification are being used the names of the regions of contemporary Italy, with the exception of the Subappenino Lucano, the Subappennino Dauno - both referring to ancient Italic tribes (the Lucani and the Daunians) - and the Subappennino Apulo-Garganico, a minor mountain range in the north of the region Apulia. The Anti-Apennines are usually situated in proximity to the coast of the Adriatic or the Tyrrhenian Sea.

Here below you will find a (surely incomplete) list of areas, subareas* and ranges, subranges or mountain groups of the Apennines, Sub-Apennines and Anti-Apennines, respectively. The list is trying to follow a latitudinal order, i.e. The areas from north to south, which, for obvious reasons, is not always possible.
*Sorted under 'subarea' are only ranges (or mountain chains) belonging either to the Sub-Apennines or the Anti-Apennines, both parallel running to one of the main ranges of the Apennines.