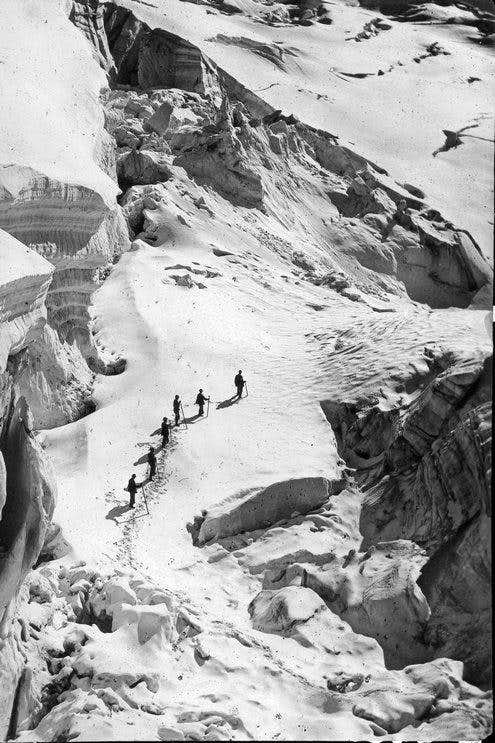 Is this a real shot? Because it looks like it!
If so, this is by far the best vintage photo I have ever seen in my life!
Just FANTASTIC.
Period.
Where did you find this?

Auguste-Rosalie Bisson was active from 1841 until his death in 1900. Son of the painter Louis-François Bisson he created with his brother Louis-Auguste Bisson (1814 - 1876) a photographic studio.
Auguste-Rosalie Bisson took the first photo of the summit of Mont Blanc during the summer 1861.

They were pioneers of French photography,contemporary of Nadar, among the very first to take instant photos and the first to take photos of alpinism. The then French king Napoleon the third ordered those photos on Mont Blanc from them. They were on glass slides using a similar apparatus for instant shots as Whymper did use himself some years after them, but their production was produced also on large albumen prints. Yes those photograph pioneers were producing work of an incredible quality. They did twice the ascent of Mont Blanc. I recently participated in writing a book on the first ascents in the Mont Blanc range and it is the historian in charge of the overall work who had all those photos and paintings for use.

Oh yes...
Again, breathtaking.
Now I understand your love for History of alpinism and its main names, you are a Historian.
I am too a Historian!
;)
All the best Eric
Paulo