Bob Sihler
Add photos See all photos
If you have any interest in hiking and scrambling in the Las Vegas area, Red Rock Canyon in particular, then you have seen the picture: a narrow, wildly exposed ridge of bare sandstone, sometimes with a person perched precariously atop it and taken from an angle that makes the ridge look incredibly steep as well.

My version from a wet summer's day: 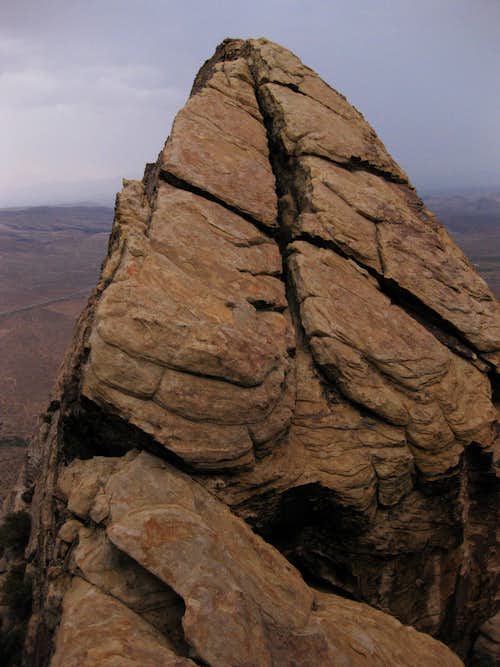 This is White Rock Pinnacle, which looks impressive in many pictures but in reality is only a minor outcrop on massive Mount Wilson, the highest sandstone peak in Red Rock Canyon National Conservation Area. Nevertheless, it has exposure that may feel sickening to almost anyone who is not a seasoned climber (and may still spook many of them), and the route, though not long, is a lot of fun, being Class 4 at the very least and about 5.4 at the hardest (explained later).

I have seen this route described as the best, most thrilling, or most exposed hike in the Vegas area, but let me assure you that it is not a mere hike. Anyone who is purely a trail hiker or Class 2 hiker is not going to like this route at all. There are several spots of Class 3, a Class 4-5.4 short wall, a Class 4 chimney, an exposed Class 3/4 canyon wall, and then the final stretch to the summit, which is mostly Class 2 with a little 3 but hideously exposed the whole way, especially on the south side.

But for anyone experienced with Class 4 terrain, the route is fun and not that scary (when dry), and despite suggestions you may see in some sources to have a rope, I really don't think one is necessary unless there are bad weather conditions or someone in your party has never gone beyond Class 3.

Anyway, I got an itch to climb this peak, so climb it is what I did, or thought I would do, when my family and I went out to visit my parents in Vegas last spring.

In a guidebook I own, the author mentions that the gully to access if one wants to climb the peak is the southernmost gully on the eastern face of the mountain.

He is right. Here is where I screwed up: I judged the southernmost gully on the east face based on what I could see from the Scenic Drive through RRCNCA.

You see, the gully is not visible, or I missed it if it is, from the Scenic Drive, and from the trailhead, the correct gully looks unclimbable. As the route page says, "As you approach the gully, it appears a sheer wall hundreds of feet high blocks the gully about halfway up. This is only an illusion!"

And the route page includes a picture that leaves no doubt as to which is the correct gully.

So even though my gut was saying I should try the "unclimbable" gully, especially since the other did not seem to lead to a peak with exposure anything like the pictures of White Rock Pinnacle suggested, I ruled out the dead-end route and proceeded with approaching the "correct" gully.

Even though I had my doubts, I headed off to what I thought was the correct gully. Conditions in the gully were harder and brushier than I had expected them to be, but I kept working my way through and up. As I became more and more convinced that I was going the wrong way, the going was also getting harder, and eventually I found myself climbing on Class 5 rock. It was a cloudy but warm day, and I had packed a rope and other necessary gear because I understood that a fixed line traditionally at the hardest part of the route might not be there anymore, so I was hot, sweaty, dirty, and not enjoying unprotected Class 5 climbing with about 30 pounds on my back. Finally, I gave up and headed back, determined to study the route description more carefully or find out if I had been in the wrong gully.

For the record, it turned out I was in the gully to the right of what is labeled as Gully 2 in this picture. Below is my own photo which shows Mount Wilson, White Rock Pinnacle, Dead Horse Point, and both the correct gully and the one I was in. White Rock Pinnacle is the bump way out on the left edge, and the gully where the route is is just below and right of it. 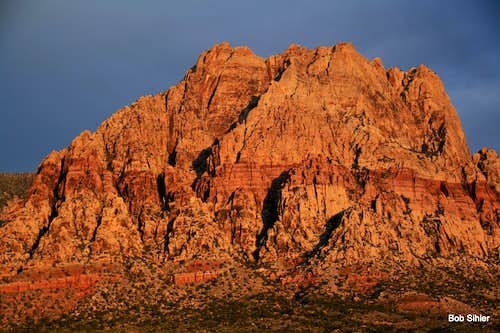 A bit over a week later, I went back, certain of the route this time. The problem, though, was the weather. Dawn was featuring moody, threatening skies, but the sun was breaking out, too, and I hoped the sun would win. In the meantime, I enjoyed the lighting: 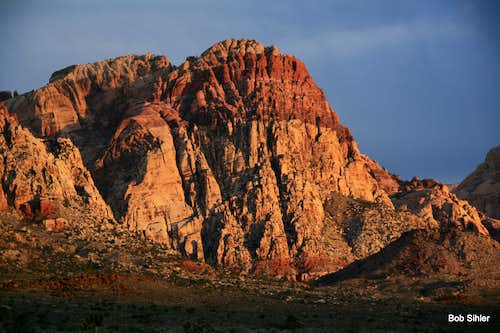 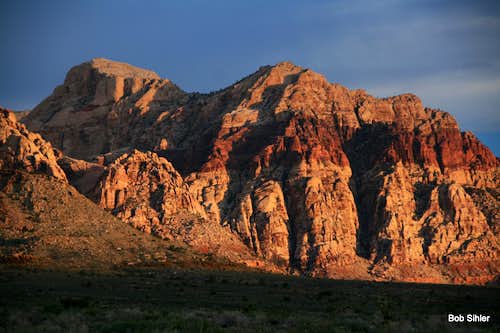 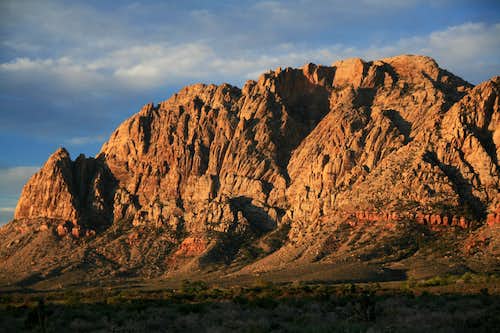 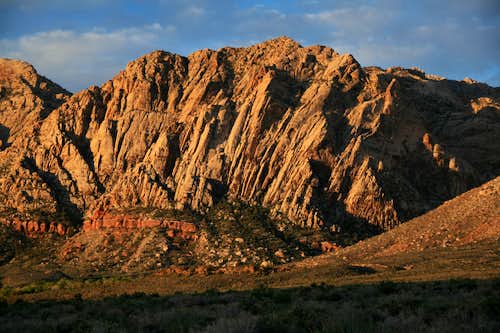 Sandstone Mountain
As I headed out, though, light rain began to fall, and as I got higher up in the gully, the precipitation got heavier and the rain changed to snow. Not wanting to fail again, though, I pressed on. Pretty sure I could handle the 5.4 spot should the fixed line not be there, I had left the rope behind, and thus I was moving quickly despite the sub-ideal conditions.

The fixed line was there. At this spot, a short wall with what has been described as an "awkward" crack (and indeed it is), the line makes 5.4 into Class 4. But I really did not want to use the line. However, the wetness and the cold were making the moves harder than they would have been normally, so yes, I admit I grabbed the fixed line to help get myself up the pitch.

A chockstone and chimney make the next interesting part of the route. Getting through that with no problem, I made my way to the last part of the gully, a scramble of 100-200' up a sandstone wall to a saddle above. 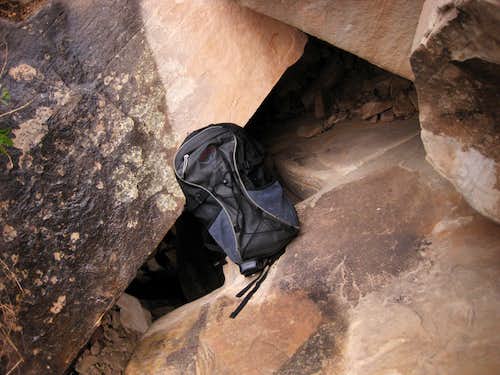 Chimney from above the exit
Normally, this is Class 3/4 with exposure, but the combination of slick wet rock, swirling snow, and numbing hands was making things treacherous, even frightening. As one part of my mind questioned my sanity and the need for continuing in this endeavor, another part argued that I would not appreciate having to come back yet again and that the end was so close. 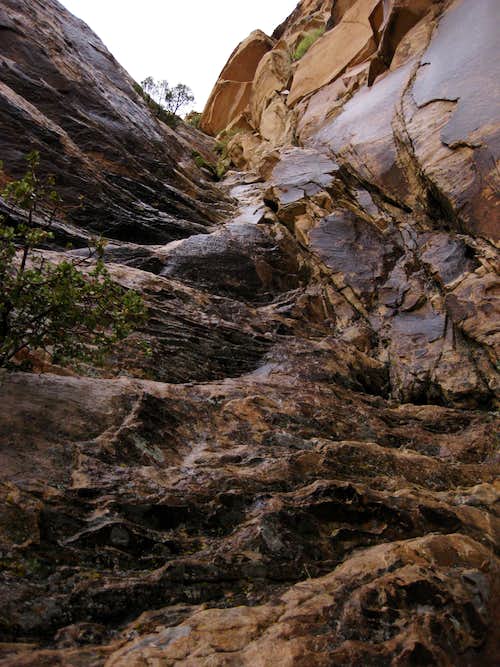 Canyon wall scramble
The reckless part of me won, but when I reached the saddle and was out in the open, I found that the wind was conspiring against me, too. Taking a good look at all the exposure along the final wet and windy stretch to the summit, I decided I'd rather live to climb another day. Muttering, I descended.

Of course, the snow soon stopped and the sun broke out. Muttering changed to audible profanity. Just as I was about to turn around and try again, though, all the junk came back in, and that confirmed the decision to retreat.  And I smiled.

Back in Vegas come July. My parents' house would be a base for a trip of nearly seven weeks that would include time in Death Valley, the Sierra Nevada, Zion, Montana, and more. Much of the time, my parents would be with my kids as I did my traveling either alone or with my wife. Good deal!

Climbing and hiking in Red Rock Canyon in the summer are not high on the list of recommended activities, but I wanted to get out there a bit regardless to do some warm-up outings before the bigger trips. And since climbing White Rock Pinnacle only involves about 3 miles round-trip and around 1000' of elevation gain, I figured that a predawn start would keep me out of the bad heat. At worst, I'd only be under a dangerously hot sun on the hike back from the gully to the car, and that I wouldn't mind since I'd have plenty of water and would enjoy the chance to take off my shirt and work on my tan.

As it turned out, I needn't have worried. For the third time out of three visits, I was to have crummy weather for White Rock Pinnacle. The benefit this time was that temperatures would not climb above 75. The downside was that it was raining and I was hearing rumbles of thunder as well.

By pure coincidence, it was Friday the 13th, the same date of my second attempt in April. Not giving that much thought, I set out.

The route was wet again, but having done it that way once before and not dealing with the cold this time, it wasn't bad, and wind wasn't much of a factor, either, so at last I made the top.

I did not touch the fixed going up or down!

And I made the summit.
No strikeout for me!

Back at the saddle at the head of the gully, I saw a way to get higher up the mountain. Curious to find out how far I could go and what there was to see, I took it.

It was worth the extra effort and time. In the course of things, I found my way up another minor summit on Wilson that turned out to have been Dead Horse Point, I spied a route leading higher up the mountain (perhaps to the summit of South Wilson-- must go back another day), and I followed my eyes and ears to find rushing water, including a temporary waterfall, created by the day's rain. No matter how many clear, sparkling mountain streams I see, there is still something indescribably awesome about seeing fresh water flowing over desert sandstone.

The rain was on and off all day, and I did pay a price for hiking on wet, slick sandstone-- I slipped and fell in one place, and although by instinct I put my hand out and cushioned myself against a harder fall, that hand happened to land on a cactus. About 50 spines large and small were stuck in my hand and arm. One was big enough and deep enough that when I pulled it out, my hand bled pretty nicely for a few minutes. At least I had the rain to wash it off! I removed most of the spines right away, but for weeks, I was still finding them and pulling them out, and for weeks, I had to be careful while climbing because that hand was tender and prone to giving me piercing pain when I applied a lot of pressure on it.

In fact, there are still two spine tips embedded so deeply in my palm that I have not even been able to cut them out with a knife or razor blade. But I still feel the bumps, and I guess I'll have them for the rest of my life.

Well, just another story to tell. I love my scars and such, anyway.

Re: Persistence wins the day

Thanks, Rob! It's a little peak, but maybe that made me all the more determined to get it after the miscues. Last week, something similar happened out there; I messed up on the route to a certain peak, figured out the mistake but had too little daylight left, and returned two days later to get it right.

Nice report, Bob. I've been up on that "class 3/4" wall just below the summit and it can be pretty harrowing in the wrong conditions.