Baldwin's Chimney to the Parabolic Slab

This is not an official two-pitch route at Vedauwoo, but it does represent the easiest way to the top of the Parabolic Slab (aka the Potato Chip). Doing the free-hanging rap off the Parabolic is a must at Vedauwoo, and it is probably the only reason most people climb Baldwin's chimney.
Baldwin's Chimney is the first pitch.
The second pitch is from the belay to the top of the Parabolic Slab.
Many Vedauwoo summits are attainable by hikes or scambles. This one is not, and that just adds to the cool factor.

From I-80 between Laramie and Cheyenne, leave the highway at Exit 329, marked for Vedauwoo. This is about 16 miles from Laramie. Take Vedauwoo Road east and drive 1.2 miles to where you can turn left onto a well-signed road for the Vedauwoo Recreation Area. Instead of turning, though, continue straight as the road turns to dirt. Very soon, turn into an obvious parking area on the left. The Nautilus is almost close enough to touch.
Vedauwoo Road is usually clear of snow by May and sometimes as early as April.
This climb is on the northwest side of the crag and is easy to see but not easy to get to. The way to its base is not obvious and requires dropping into a slot and then following the slot until you can scramble up to the base. You'll figure it out.

I've heard stories of people bringing huge gear to protect the chimney all the way up, and I've heard it's not necessary. My advice: carry the big stuff but not to protect the climb; atop Baldwin's Chimney, where some say to sling the chockstone to do the belay, which looks awkward to me, there is a horizontal crack above a wide ledge, and it will take the bigger cams. I used a C4 #4 and #5 and an Ultralight Master Cam (can't remember which one) to build an anchor. 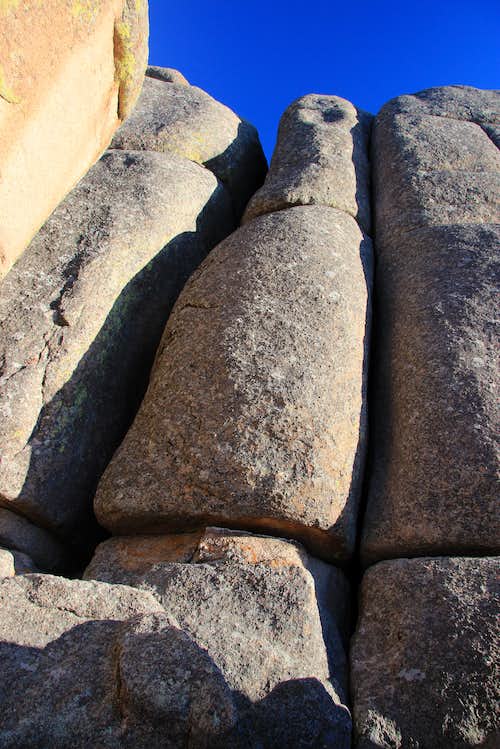 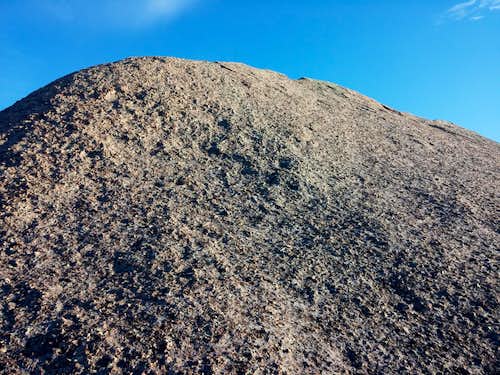 Top of the Parabolic Slab
Now anchor yourself in and set up the rappel. There are good feet for a couple of feet as you get started, and then you are in space. Awesome.
Once down, find one of a few walk-off options (which are actually scrambles). 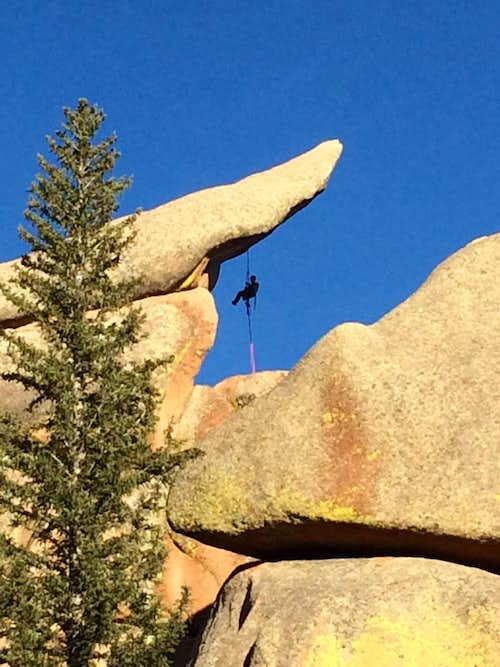 Me Rapping off the Parabolic Slab

I led this with a set of stoppers, a set of Metolius Ultralight Master Cams, and a #4 and #5 C4. I placed two or three medium-size cams and no stoppers, and I used a long sling for the chockstone I mentioned in P1.