Baylor Peak (7721 ft) is the northern-most peak of Organ Mountains, a small range that rises to the east of the city of Las Cruces in southern New Mexico. A trail starts at Baylor Canyon Road Trailhead (4880 ft) on the west side of the mountains and goes to the 6390 ft Baylor Pass and then descends to Aguirre Spring Trailhead (5660 ft) on the east side of the mountains. From Baylor Pass, a beaten path can be followed to the summit of Baylor Peak.

This beautiful peak was well visible from the house we rented near the Organ Mountains. Unlike some of the other jagged nearby peaks that seemed to be technical climbs, Baylor Peak appeared to be a hike. 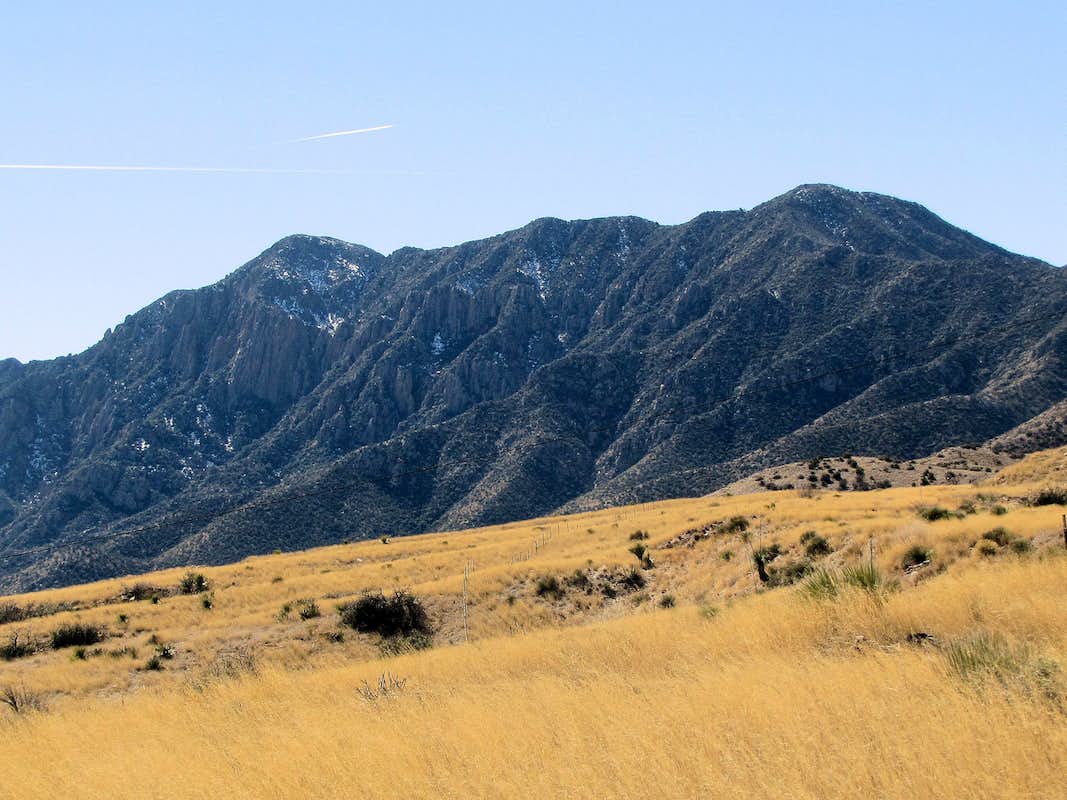 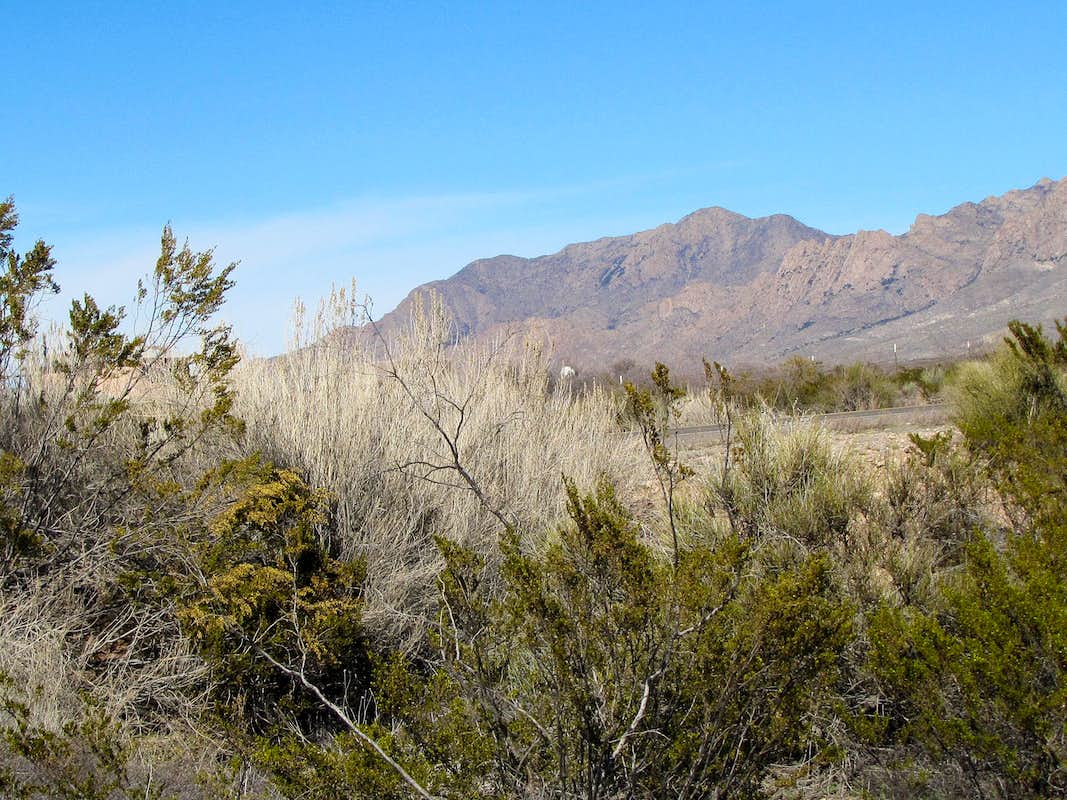 The southwest face of Baylor Peak My GPS Track on Google Earth

Sunday February 14, 2016
Left the house we had rented near the Organ Mountains after 7 a.m. Sunrise was at 6:50 but since I was on the west side of the mountains, the sun did not get to shine on me until much later. It was only a 7 mile drive to the Baylor Pass Trailhead on Baylor Canyon Road. There was a tent at the trailhead and someone was sleeping in it. I started my hike at 7:30. It was in lower 40s degrees Fahrenheit.

Baylor Peak was right in front of me to the east. Because I was in the shade, I saved picture taking for the return trip when lighting would be better. The jagged Needles could be seen to the southeast. The trail went up a plain covered with yellow grass and scattered bushes toward the mountains. Went by a few free roaming cows. After around a mile, I went through what seemed like a disassembled hiker’s gate. I was then “out of the plains and in the mountains”. The trail began to make twists and turns going up the slopes of Baylor Canyon. Behind me (to the west) the plain went slowly down to the city of Las Cruces. Low mountains could be seen rising to the northwest of the city. These must have been the Robledo Mountains. I was then mostly in the sun. The southeastern face of the summit of Baylor Peak could be seen above me. As I neared Baylor Pass, a woman and her dog were coming down the trail. She said she was from Albuquerque and had gone only until the pass. At 9:15, I reached Baylor Pass. The plains to the east came to view. Sat there for a few minutes eating and drinking. I then left trail, turned north and started to follow a beaten path up the southern slopes of Baylor Peak. Baylor Peak (on the left) from Baylor Pass

At first, there was hardly any vegetation on the slope but then all kinds of thorny bushes appeared. I was afraid of losing the path and ending up bushwhacking through the nasty thorns but fortunately that did not happen.

As I went higher, the snow covered north face of The Needles appeared behind me but I did not take any pictures until I reached the summit.
Looking back down at the saddle. Looking back at Baylor Pass

I then reached the top of a high point (around 7600 ft). The true summit of Baylor Peak appeared in front of me. I had to hike on top of a narrow rocky ridge-top. Nothing scary or technical but the thorns made me extra careful.

More rock hoping below the summit.

Reached the summit at 10:35. To the south, the snow covered slopes of the jagged Organ Peak, Organ Needle, Flat-Top and Rabbit Ears made a very impressive scene. To the north, the sub-peaks of Baylor Peak and San Andres Mountains were in good view. To the east and west, plains stretched out into the horizon.

After having lunch and enjoying the views, I left at 11:00. Going down the steep slope was pretty slow. The jagged needles were now well visible. Near Baylor Pass, I suddenly noted a huge granite tower which I recognized as Sugarloaf Peak. It was really just a high point on the very long northern ridgeline of Organ Peak but looked very impressive. Reached Baylor Pass at 12:15. A couple had just come there on the trail from Aguirre Spring Trailhead. I sat there for some time, then got back on the trail to Baylor Canyon Trailhead. 
The southwest face of Baylor Peak. Behind me, a rocky summit could be seen, it was probably Rabbit Ears. I then exited the mountains and was back on the plain with yellow grass. Reached my car at 1:55. Lots of people were there.