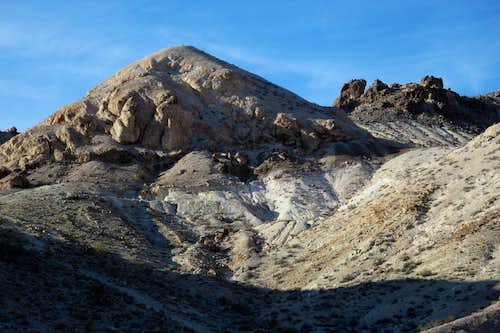 Subpeak on Beatty Mountain
For most hikers and climbers, the small town of Beatty, with its one all-way stop sign and no stoplights, is a gateway to Death Valley or a refueling point, for both the car and the stomach, between Las Vegas and Reno (or the Sierra Nevada via Bishop or Lee Vining).
(Tip to Death Valley travelers: gas is going to be way more expensive inside the park, almost twice as much in some spots, so even if you are only a few gallons down, fill up!)
Seen by most but ignored by even more than most are the Bare Mountains, the colorful range of peaks immediately southeast of Beatty. Unbeknownst to most climbers, the Bare Mountains harbor a few nice Class 4 peaks with narrow, exposed ridges.
Unfortunately, Beatty Mountain, one of the northernmost summits in the range, is not one of those. It's Class 3 at best, and then only if you manage to make it that way.
Nevertheless, Beatty Mountain, which looms over town like some displaced peak from the more colorful areas of Death Valley, does have some things in its favor: 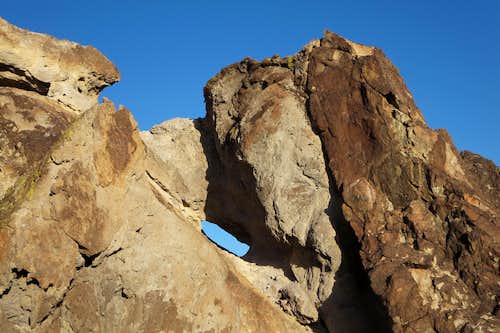 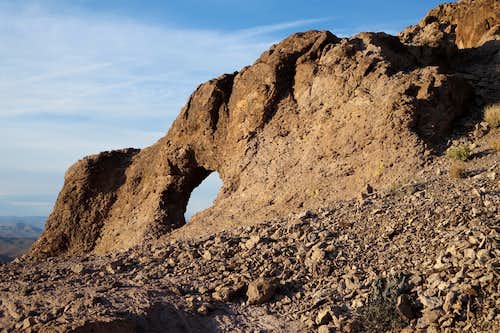 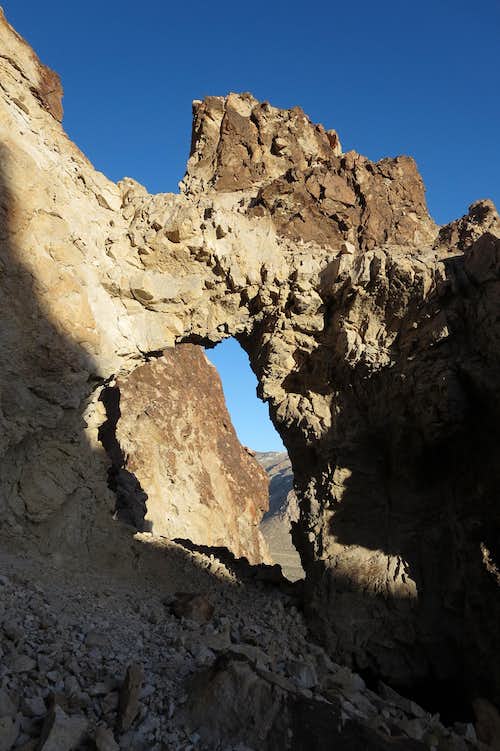 There is no real trailhead for the peak. At the south end of town, there is a small residential area, and some dirt roads near its edges access the western side of the peak. However, you may run into issues with parking on or near people's property, so a better bet is to head just a little bit further south and find a dirt road on the southwest side of the peak. With high clearance, you can cut off some elevation gain by driving up a spur road to its end or some other point you choose. Otherwise, park so as not to block the road (it is popular with ORV users) and start hiking up the spur. You will have the usually dry Amargosa River between you and U.S. 95.
Other approaches seem possible from off the road through Fluorospar Canyon to the south, but I have neither tried nor examined them.

Along the spur, look for a cave-like formation off to your left and across a wash. This seems to be the start of the route most people use. 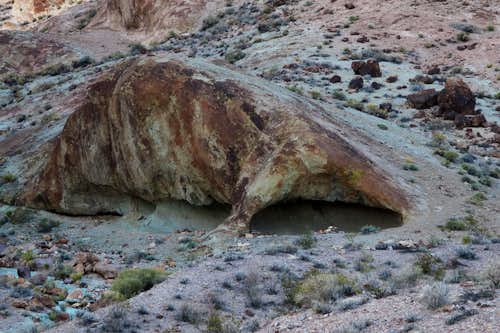 Route Landmark
Make your way to the cave and then head up the wash. Eventually gain steep slopes and work your way to the ridges leading to the summit. Cairns and use trails can help, but the way is pretty obvious.

Beatty Mountain
Alternately, head up the spur to its end and then head up steep slopes to the false summit above you. Then traverse the crest over to a saddle between the summit and another false summit and hike a short distance to the true summit. Resist the urge to leave earlier and use a prominent gully to gain the saddle, for you will either have to lose a great deal of elevation to do so or endure some of the worst sidehilling (due to steep, loose rock that it more like gravel) I have ever had to do.
One-way distance is around 1.5 mi, with about 1000' of elevation gain. 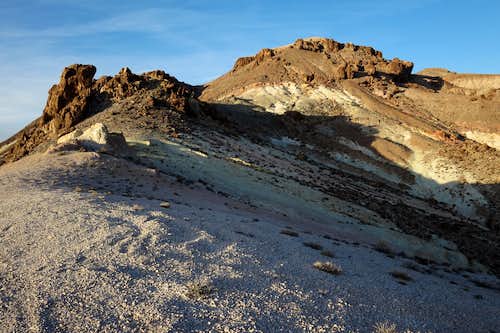 None other than watching out for private land.

Spring, fall, and winter are best, but because the route is short, summer ascents are okay as long as one goes early or late in the day.

The peak is on BLM land, which means you can probably camp pretty much anywhere unless there are signs expressly restricting it.

The town and peak were named for Montillion Murray Beatty a miner/borax worker/rancher who owned and operated a ranch in the area in the late 19th century. He was said to be welcoming to all who passed by that way. See page 168 of Death Valley and the Amargosa by Richard Lingenfelter

Thanks. One of these days I'll get around to adding that in.