Bridge Mountain After the Storm

Bob Sihler
Add photos See all photos
From several summits and from certain points along the Scenic Drive and SR 159 in Red Rock Canyon National Conservation Area, one can see a massive dome-like peak that makes one stop and say, "Wow, what is that?"
That is Bridge Mountain, which stands out from its neighbors because of its size.  It almost looks like something that should be in Yosemite if Yosemite had sandstone peaks.
Because the standard route involves Class 3 scrambling and the approach involves a rugged 4wd road (can be hiked, of course, but that adds distance and elevation gain), Bridge Mountain, while not exactly seldom-visited, is one of the most elusive "major" summits (here, defined as the high named ones seen from the Scenic Drive) in the area.
In addition, it has a fun, highly scenic route, though in my opinion it is excessively cairned, mostly needlessly, for the terrain will eventually force all but the densest of climbers onto the correct route.  All the cairns really do is save time, which, admittedly, can be important when one is out here in hot weather, for this peak would turn into an oven on a hot day due to all the exposed rock and the very little shade.
My main purpose in posting this trip report is actually to give additional exposure to some critical driving and trailhead information that is in the Additions and Corrections section of the main page.  The information could help someone avoid getting lost potentially get someone lost and/or into a situation incorporating both being stranded and incurring serious vehicular damage.
So here is that critical information:
The driving directions on the page make it sound as though it is about 6.5 miles from the Scenic Drive to Red Rock summit, but I clocked it [in July 2012] at 5.1. Also, there is no longer a sign at Red Rock Summit.

I mention this because there is a possibility that not knowing it could get someone unfamiliar with the location into trouble. Because the sign is not there, one might pass Red Rock Summit at 5.1 miles and think it is the beginning of yet another dip before climbing to the true summit 1.4 miles later. The danger is that less than a mile from RR Summit, the road becomes so nasty that it would be difficult for someone in a stock SUV or truck to get through, and a stubborn or foolish person might get stuck or incur serious vehicular damage in trying to continue to where he thinks the trailhead will be.

The road is really rough. I definitely needed 4wd to get through in a few spots, and the old 4Runner I was in had higher clearance than just about any stock SUV you see these days. Some people in Explorers were turning around; even someone with an old 4Runner like the one I was driving had stopped well short of Red Rock Summit and had chosen to walk the rest of the way. I recommend skid plates and true all-terrain tires in addition to high clearance and 4wd, though I only scraped bottom once.  Wet conditions only make it worse, and it was a bit wet when I drove it. 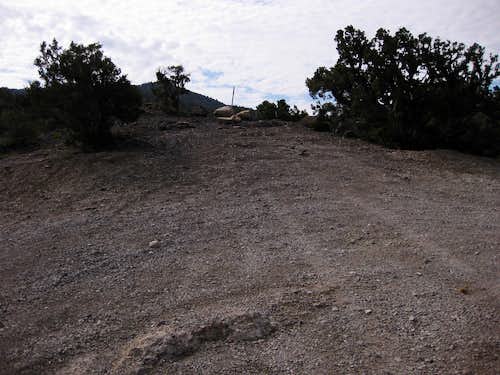 Park here and find the trail approaching North Peak and Bridge Mountain just up the hill.  Driving directions from some sources may make it sound as though it is about 6.5 miles from the Scenic Drive to Red Rock summit, but I clocked it at 5.1.    Also, although directions often mention a sign, there was no longer one as of July 14, 2012.
But, since I know SP members like a story and some pictures, those will now follow...
The afternoon before, I drove up to Red Rock Summit with the intent of hiking to North Peak, both the limestone one and the sandstone one, that same day, spending the night in the car at the trailhead, and climbing Bridge Mountain the next morning.  Summer is not exactly the ideal time to be going after the sandstone summits out here, but by going late and early in the day, I knew I'd beat the worst of the heat and be okay.
As I reached what I later confirmed was Red Rock Summit, I noticed the mountains south of me changing and trending away from the sandstone, and I began to get suspicious, but I decided to continue to 6.5 miles and see.
Among the reasons I'm glad the trailhead really isn't at 6.5 miles is the fact that I never would have been able to drive there.  Even if I'd felt up to negotiating the truly nasty piece of "road" shortly beyond Red Rock Summit, I wouldn't have been able to, because a vehicle was blocking the road.  On the way up the road, a guy in a pickup heading the other way waved and stopped.  With him were some foreigners who spoke about no English.  The driver proceeded to tell me that the road was blocked not too far ahead because the people with him had gotten their rental vehicle stuck.  He was driving them back to the BLM office so they could arrange for what must have been an unbelievably expensive towing job.
Selfish bastard that I am, I was thanking my luck that this guy had met those tourists first, for I would have felt obligated to help them otherwise, and that would have wrecked my climbing plans.
So I pressed on and found their car soon enough.  Even now, I can't decide whether they were stupid or bold or both.  They had some mid-size Chevy SUV, one of those things that's billed as 4wd when it's really all-wheel drive, which, as people with real 4wd can tell you, is not the same.  Not even close.  If you don't have 4-Low, GTFO unless you have a Subaru Outback; those are pretty mean machines.
During my life, I have a times been an English teacher, a storyteller, and a poet, yet I do not have the words to describe the situation they got into with that car.  I did take some pictures and thought of posting them, but I thought that might make a little bad karma for me, so I deleted them.  We've all done stupid things-- see here-- and I try to remind myself not to laugh too much at the foolish things others do lest I not be so fortunate the next time I do something foolish.
But they had done quite an impressive job of getting stuck.  I'll leave it at that.
Anyway, I decided to continue by foot to the 6.5 mark, but I soon realized the road was doing nothing but going downhill, and I realized that the highpoint at 5.1 miles, despite the directions and despite the lack of a sign, had to have been Red Rock Summit.
And it was.
The mistake cost me about an hour, which meant that about the last mile back to the car was during a dusk that, because of storms and cloud cover, was quickly turning into night, but I did make it to my intended summits, admired views of Bridge Mountain and built up my appetite for it, and witnessed a spectacular electrical storm over the Red Rock Canyon and Las Vegas areas.  The rain never made it my way, but ephemeral pools near the summit of the sandstone North Peak told me it had been there earlier that day.
Peaceful night-- some cold beers, a movie on my tablet, a little reading, and then sleep.
Dawn.
Clear.
There's no spectacular yarn to spin about the climb.  It was fun, I got there, and the views were great.  No problems, no surprises.  And no one else was out there-- a big plus.
The story is really the pictures that follow this final paragraph.  Among them are some shots that, although they may not make a National Geographic cover, are ones not seen that often out in this desert-- fog "oceans" among the peaks.  And I can't resist the reflections.  Never can, never could. 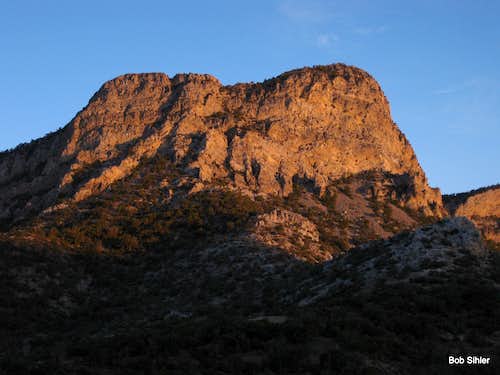 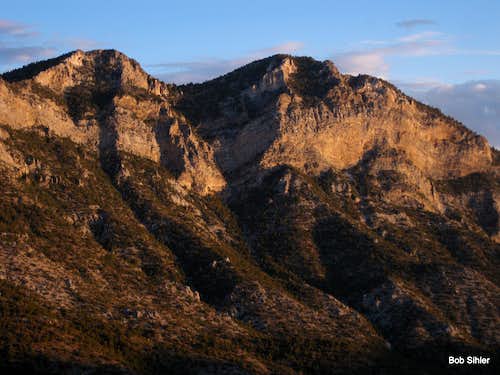 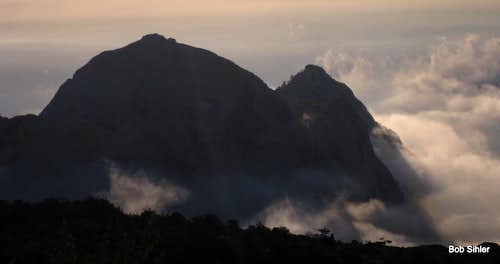 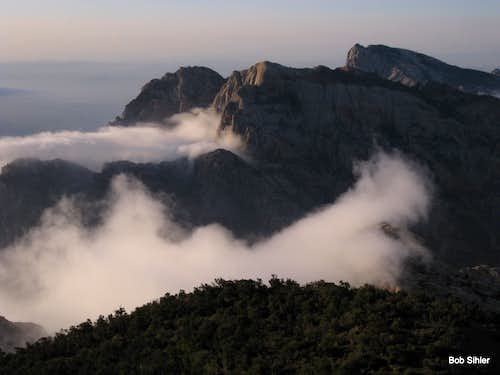 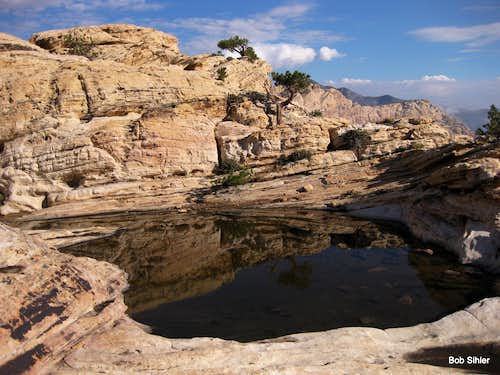 The tank near the summit 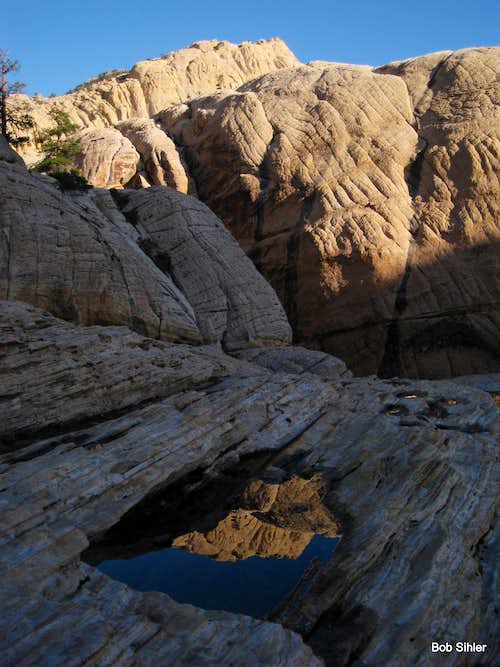 Pool near the summit 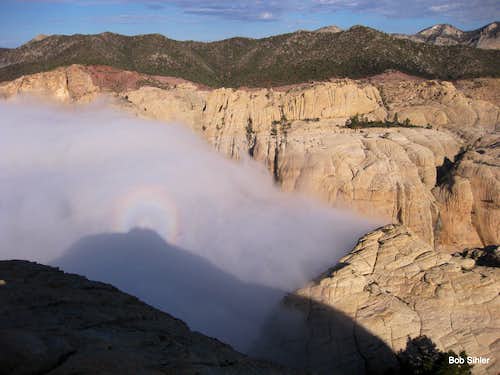 Shadow of the summit 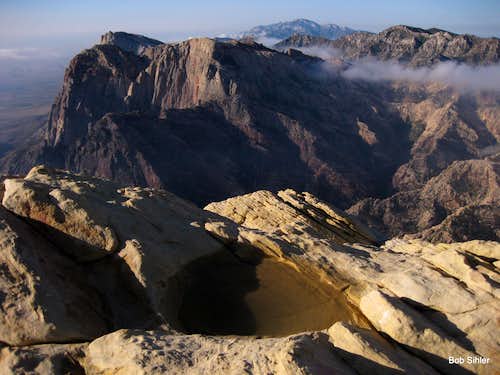