Caballo Cone is a little-known gem that towers nearly 2000 feet above the town of Truth or Consequences in south-central New Mexico. Known as Turtleback Mountain to locals, it is a surprisingly strenuous and scenic hike for a mountain so close to an urban area. As Truth or Consequences’ mountain, Turtleback deserves its nickname when the rocks and shadows near the summit display a prominent turtle shape, especially during sunsets. 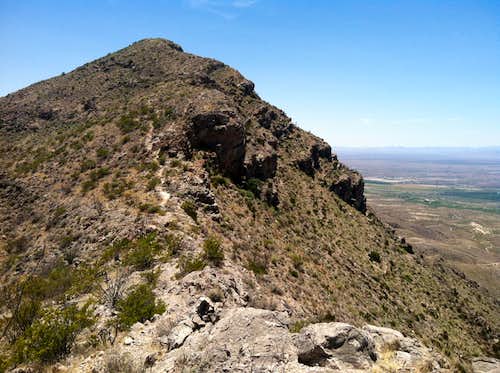 The area surrounding Caballo Cone is filled with history and interesting landmarks. Truth or Consequences (originally called Hot Springs) changed its name to Truth or Consequences in response to a radio game show challenge in the 1950s. But the town continues to live up to its original name; many hot springs are found here. One of the most popular and scenic is Riverbend Hot Springs located on the banks of the Rio Grande. T or C (as New Mexicans refer to it) also boasts some small but tasty restaurants. Recommended are BBQ on Broadway, and the Brazen Fox. Other attractions nearby include the Geronimo Springs Museum (with history about the area), and a Veterans Memorial Park. 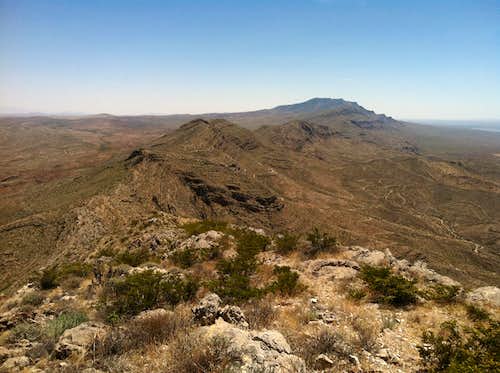 A short distance to the northeast is the famous Elephant Butte Lake State Park – the largest lake in New Mexico. This man-made reservoir is a popular destination for water sports and fishing. If birding is also on the agenda, then check out Caballo Lake and Percha Dam State Parks just a few miles south of T or C. All three parks (Elephant Butte, Caballo Lake, and Percha Dam) provide opportunities for camping, boating, kayaking, tubing, fishing, picnicking, and even waterskiing.

To the east of Caballo Cone is the Jornada del Muerto (Journey of the Dead Man), a desert basin infamous for its 100-mile stretch without water. It is part of what was known as El Camino Real (The Royal Road or King's Road) - a traveler's route from 'New Spain' (Mexico) to 'Nuevo Mexico' (New Mexico) as early as the 16th century. To the west across the Rio Grande is the famous Gila Wilderness, which became the world's first wilderness area through the efforts of Aldo Leopold (called by some the father of modern Wildlife Biology). 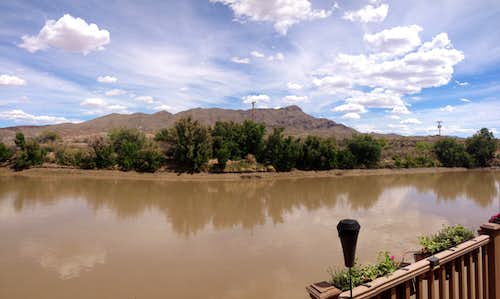 Located just off I-25, the town of Truth or Consequences is 152 miles south of Albuquerque, and 75 miles north of the town of Las Cruces.
To get to the trailhead, get off I-25 at exit 75 and head northeast on Broadway through the small town of Williamsburg. Stay on Broadway as you enter the town of T or C. The road splits and heads as a one-way through the quaint old part of the town. This is where the restaurants mentioned above can be found.  Broadway will take a 90-degree turn to the north. Shortly after this, take a right onto E. 3rd Ave. This intersection is well signed with signs pointing the way to Elephant Butte Lake State Park. Drive 3.2 miles (following the Rio Grande) and turn right onto a dirt road (called Turtleback Ave) just after you cross the Rio Grande. You will follow this dirt road for 2.2 miles to the parking area. For the first ¼ mile, the road parallels the Rio Grande. But then it breaks left through a wide wash called Mescal Canyon. Immediately after this wash, the road forks. Stay on the left fork and follow the road up the hill, and then down the hill. At this point, the road parallels the Rio Grande once again. Keep driving until you pass a cattle guard. Immediately take a left onto a short dirt road. Drive 100 feet and park. The unmarked (but well-worn) trailhead is around the hill to the south. 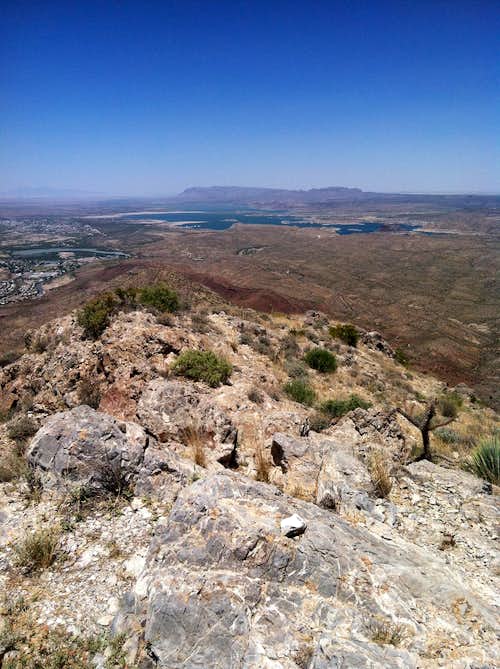 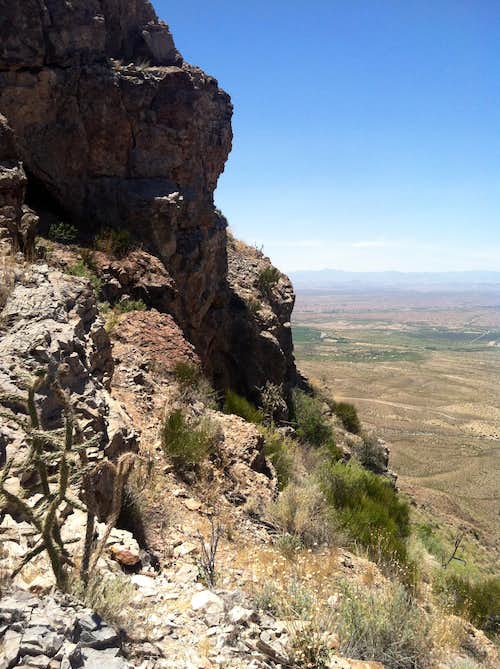 Not officially maintained, this 4.4 mile roundtrip route is well-worn and easy to follow, especially because it has small rock cairns marking the way. Although from a distance the ridge looks straightforward, it is class 2, rocky, steep, strenuous, and follows a sawtooth course at the crest. Despite its relatively short distance, the trail feels much longer with all the ups and downs, and with the various false summits. Other reports of this route recommend 3 hours for a roundtrip fast climb, with 4-5 hours being the norm for slower parties. The scenery is fantastic, especially because one follows the ridge for the majority of the climb. The ridge falls away on either side, and has a quite airy feel to it, complete with a few (optional) knife-edges.
The 7.5 minute USGS map for the area is Palomas Gap (NM). 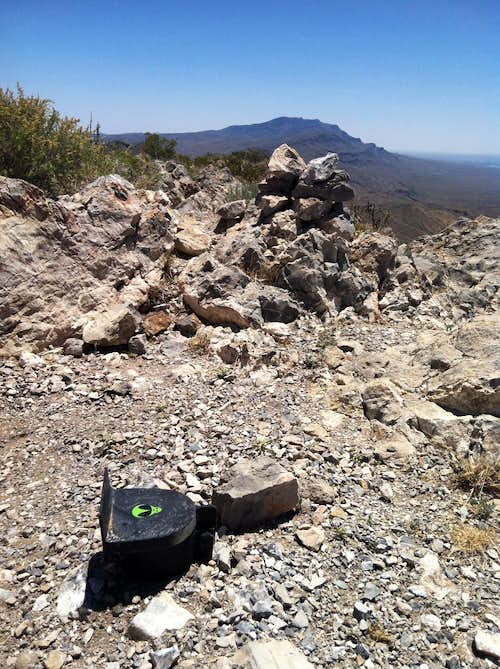 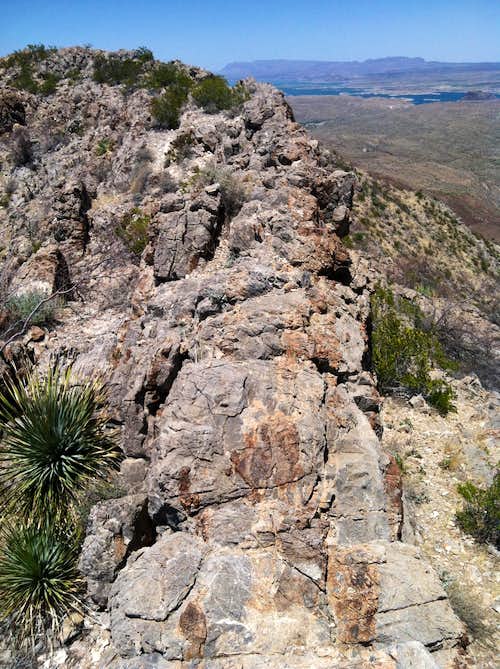 There is no red tape. However, the road that leads to the trailhead traverses private property so please show respect and don’t trespass.

The best seasons are fall, winter, and spring. Summers can be brutally hot. 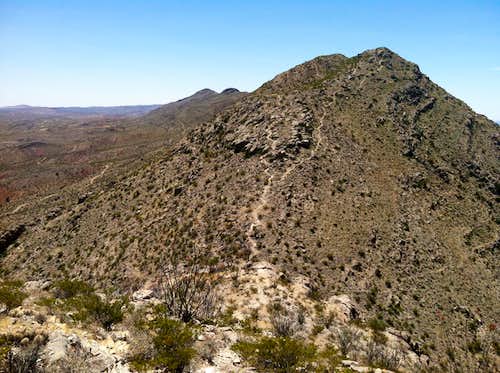 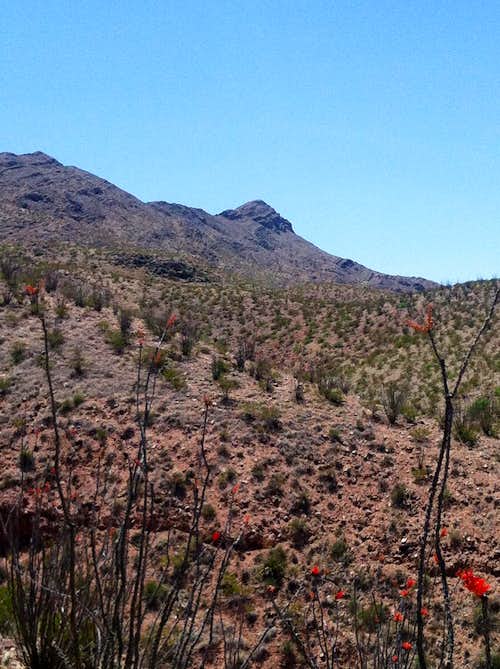