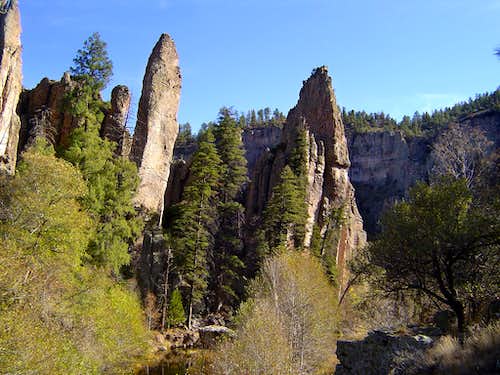 West Fork of the Gila River

In many respects, the Gila Wilderness is the quintessential American wilderness. Towering peaks, vast ponderosa forests, extensive canyon networks, Indian dwellings and a deep sense of isolation all combine to create a distinctive albeit archetypal wild landscape. Indeed, it was this land, still one of the wildest corners of the lower 48 states, that was the first region to be set aside distinctly as a wilderness. This action, led by the great Aldo Leopold, jump started the process to set aside other wild places as regions to be left unspoiled by the progress of society. However, the Gila Wilderness is far greater than its significant role in wilderness preservation. It is the home of the Mogollon culture, the Chiricahua Apache, hardened pioneers, miners, ranchers and outlaws, and now those who seek solace in its primordial beauty. It is an epic wild land to lose oneself in, where the spirit of Geronimo and Billy the Kid are still palpable.

Located in southwestern New Mexico, the Gila Wilderness Area became the world’s first such designated area on June 3, 1924. When the Wilderness Act was signed into law by President Lyndon B. Johnson in 1964, the Gila became the first congressionally designated wilderness. Its 558,065 acres make it the largest wilderness area in the American Southwest. It measures approximately 39 miles east to west and 27 miles north to south. Along with the nearby Aldo Leopold and Blue Range Wilderness Areas, the Gila is part of Gila National Forest.

Elevation in the Gila Wilderness varies from a low of about 5,000 feet along the Gila River to a high of 10,895 feet at the summit of Whitewater Baldy in the western part of the wilderness. The wilderness area protects the upper Gila River watershed. This is the longest undammed stretch of river in the contiguous 48 states.

The Gila Wilderness is a transition zone between the Rocky Mountains and the Chihuahuan Desert. It contains one of the world’s largest and healthiest Ponderosa Pine forests. The Gila is home to the black bear, mountain lion, bobcat, mule deer, white-tailed deer, pronghorn, javelina, coatimundi, and the critically endangered Mexican wolf, which was reintroduced in the Gila in 1988. Elk and Rocky Mountain bighorn sheep were reintroduced to the area in 1954 and 1958, respectively. There are a variety of eagles and hawks, along with the osprey, owl, turkey and blue grouse. Reptile life includes the Arizona coral snake and Gila Monster. 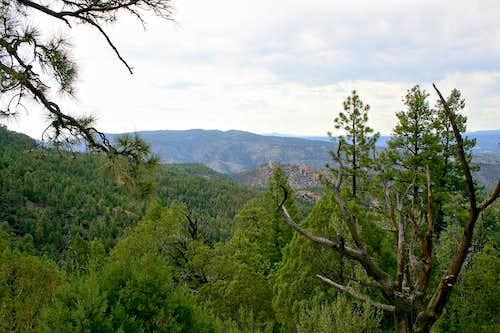 The Gila Wilderness viewed from an overlook.

The Gila Wilderness is a very large area. These maps are intended to show the wilderness in both its state and regional context as well as provide an overview of its geography 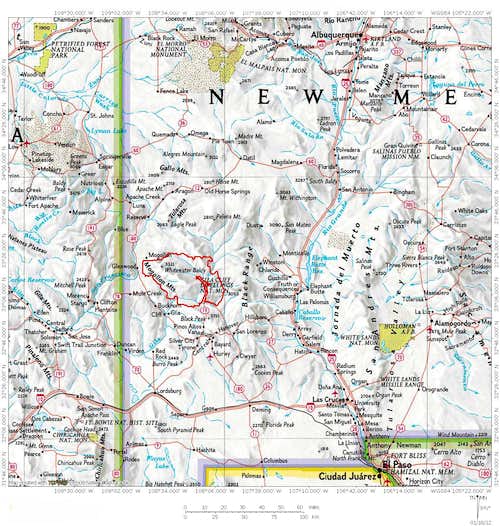 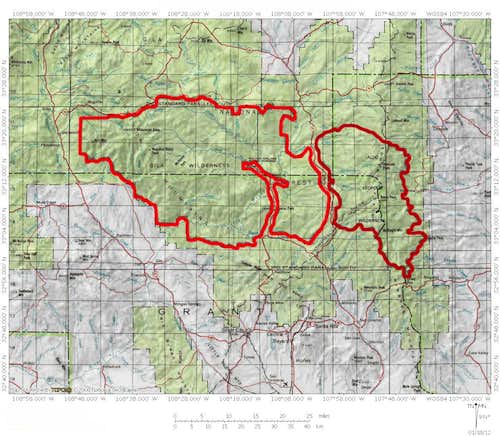 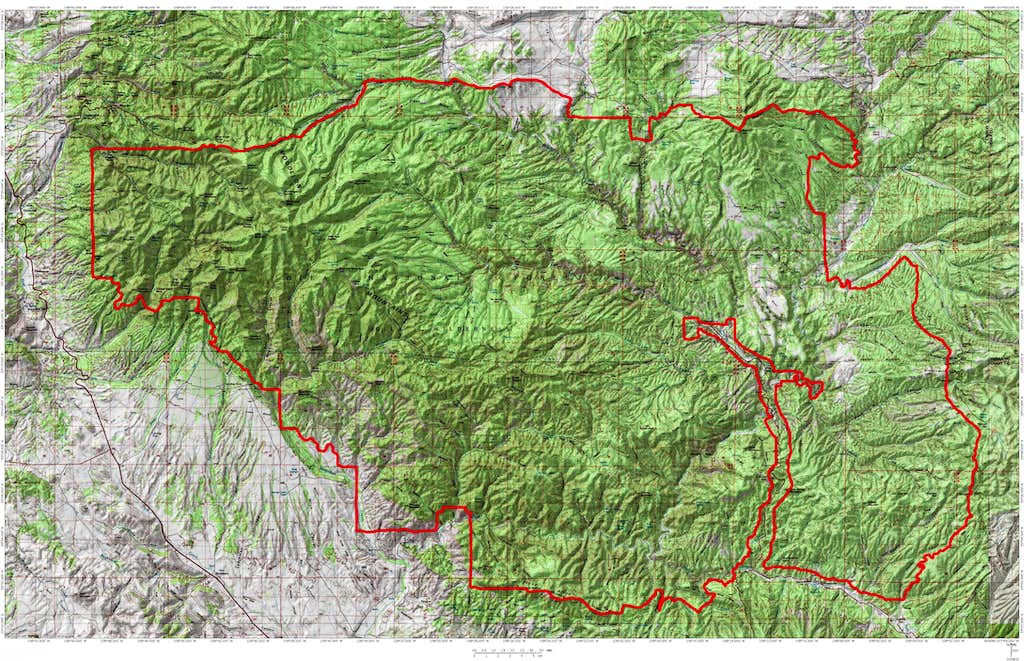 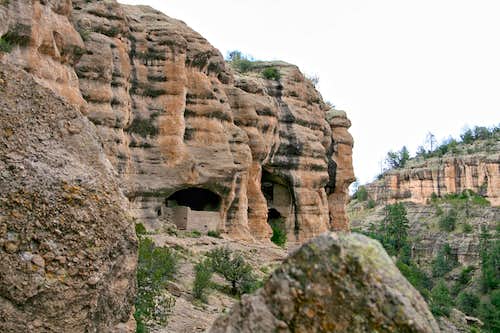 br />A key point of interest located near the heart of the Gila Wilderness is the Gila Cliff Dwellings National Monument. The cliff dwellings, constructed by the Mogollon people in the 1270s and 1280s, consist of approximately 40 rooms built inside six caves in the mountainside, about 180 feet above the floor of Cliff Dweller Canyon. Dendrochronology dating techniques indicate that timbers used in the construction were cut between 1276 and 1287.

For unknown reasons, the Mogollons abandoned the area by 1300. After their departure, no one appears to have lived in the area until the Chiricahua Apaches migrated to the upper Gila River around 1500. Due to the fierce protectiveness of the Apache people, this area remained undeveloped into the 1870s.

In January 2007, a 52-year-old woman was found after 40 days alone in the Gila Wilderness, setting a new record for wilderness survival in New Mexico. The previous record for a person who was lost and found alive in New Mexico was 30 days. The woman endured single-digit nighttime temperatures and subsisted on grass and water from the Gila River after her food supply was depleted.

There are numerous maintained hiking trails and developed campgrounds along with some undeveloped campgrounds in and around the wilderness area. Most of these are open year-round, weather and road conditions permitting. Backcountry camping is permitted at no fee. West Fork Trail is the primary trail in the Gila Wilderness, and at 33 miles in length running north to south, it is the only trail that completely traverses the wilderness area. Please see the Gila NF – Hiking and Camping links in the External Links section for detailed information and maps. Trails in the wilderness area include:

The Gila Wilderness is accessible from numerous points. The directions below are not all-inclusive, but do include the primary routes.

From I-25 to the east: Exit at NM Hwy 154, just west of Caballo Reservoir. Follow Hwy 152 west, passing through the towns of Hillsboro and Kingston. Hillsboro is a historic 1870s mining town that nearly qualifies for classification as a ghost town. About the time you pass through Kingston, you will enter the Gila National Forest (not the wilderness area). At the junction with NM Hwy 35, head north on Hwy 35. You will exit the Gila National Forest prior to this junction and then reenter it after passing through the town of Mimbres on Hwy 35. Hwy 35 will put you on a general northwest heading. Stay on Hwy 35 until reaching the junction with NM Hwy 15, then turn right to head north on Hwy 15. Hwy 15 provides the primary conduit into the wilderness area. Following Hwy 15 to the end will take you to the Gila Cliff Dwellings National Monument.

From Deming: Take US Hwy 180 north. Turn right onto NM Hwy 61 and head northeast. You will pass City of Rocks State Park about 3.2 miles after making the turn onto Hwy 61. Stay on Hwy 61 until you reach the junction with NM Hwy 152. Proceed northwest on Hwy 152 for about 0.8 miles, then turn right onto NM Hwy 35. Stay on Hwy 35 until reaching the junction with NM Hwy 15, then turn right to head north on Hwy 15 into the wilderness area.

NOTE: Much of the drive along Hwys 35 and 15 is winding and with an incline or downgrade. Please drive with caution.

Leave No Trace: Wilderness area rules apply. For fees and other regulations, see the Gila National Forest links below. Backcountry hiking and camping do not require any permits. There are no roads in wilderness areas. Mechanized transportation, including mountain bikes, are not permitted. All travel must be by foot or horseback. You will find no logging, resorts nor commercial uses of any kind except for grazing.

Just before Route 35 joins Route 15 there's a small community around Lake Roberts with a general store, campgrounds, restaurant and a variety of motel-like and possibly other accommodation. Also might be worth noting if known why the 52 year-old woman was hanging out in the Gila for so long. Cheers. Edit: Yet another person goes missing there! http://www.summitpost.org/phpBB3/viewtopic.php?t=61553