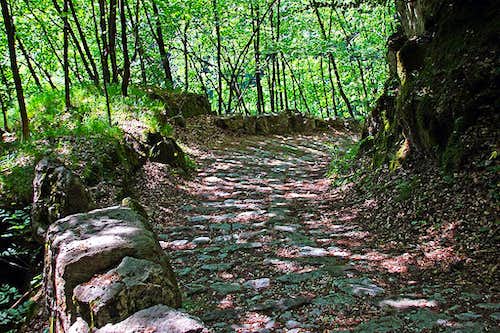 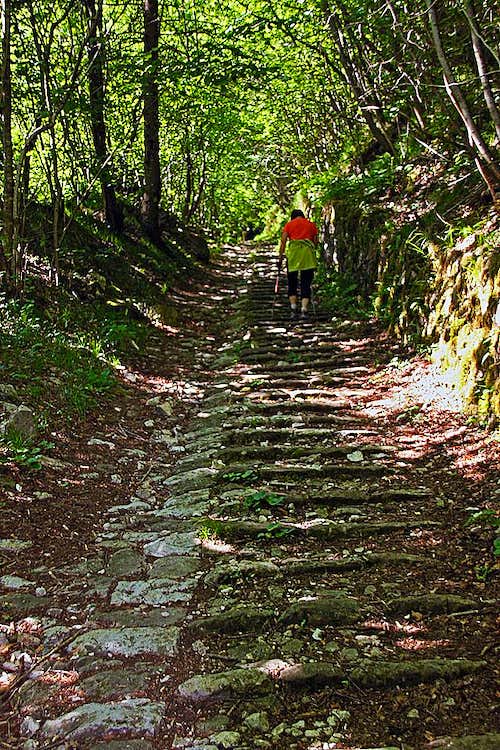 May I set my foot on an eternal trail? The ancient Calà del Sasso throws you with its rythm of countless steps into timeless trans. I would exaggerate if I would say that the stairway is today just as it was 620 years ago, that not a single stone is missing. But what is eternal? You only don't notice that on this stairway time is also running. Yes, today we are coming on the tableland with strong machines and with all the knowledge of past centuries. Everything is reachable and known to us. But when you walk by these stairs, they move you centuries into the past. I will return into present time above, when reaching my bike. Now I am meeting in my imagination peasants who carry their poor property and goods into the valley to trade them, forresters, pulling down the path covered with snow timber, yes even Loretta in Nicolò appear in front of my eyes, the couple to whom Calà del Sasso returned health and eternal love. And then I'm back in the past enough so the stairway disappears, the time machine is running faster and faster, far back in prehistoric times. But the path is still here. The eternal path on the tableland.

This path, or stairway, if you wish, is a wonderful historical approach from Valstagna on the banks of Brenta river, on the Asiago plateau. It must had been known perhaps already in prehistoric times, but as a beaten path it was built at the end of 14th century. Due to a steady inclination it is built from the beginning to the end as a sequence of equally spaced limestone steps, so it is claimed that, consisting of 4444 steps, it is the biggest stairway on the world. Once used for trade and transporting timber down to Brenta river (and then further to Venice, for building the town), today it is "only" a tourist attraction. Hiking it, you really slip back in time, as the pristine environment and intact medieval stairway work as a true time machine.

The name Calà del Sasso means descent, going down from Sasso. And Sasso is a village above the upper end of stairway.

The construction of stairway was done very carefully. The path is well beaten, you have a feeling that even today, after more than 600 years, not even a single stone is missing. On some places the terrain was levelled, so ensuring a constant inclination. Hiking by the stairway, you will soon notice it has two parts. Only half of it is done as a stairway. That one was used by people. The other half is beaten, but without steps. That's the side, where timber was transported down. The overall impression is really unique.

Through a small gorge

A straighth stretch
The stairway offers a comfortable 2 hours hike through woods, using one of steep valleys descending from Asiago plateau towards Brenta river. Most of visitors do the hike up and down by the same route, or, if going also up into Sasso village, they can descend by the marked upper variant, doing so partially a round tour. The other option is to use two cars. The hike is all the time easy, appropriate for everyone.

Very attractive is also a bike & hike tour. That's what also we did. We left bikes above, just below Sasso, drove by car down into Valstagna, hiked up Calà del Sasso and then prolongated the pleasant return by bikes down into Valstagna.

Sasso
You start the hike below in Valstagna valley. From Valstagna town, on the banks of river Brenta, you drive in the NW direction into the valley. Through the valley mouth you follow the road to Foza town, but only to the parking place at the fist road turn. There the hike starts, because the macadam road further into the valley is closed for public traffic.

The upper parking place is just below Sasso. This village can be reached by two roads (and the third one, coming from the west over the hills). From the north you reach there from the main road Enego - Foza - Gallio - Asiago, you drive via Stoccareddo. From the south-west, you deter towards Sasso from the main road Bassano del Grappa - Conco - Asiago.

Details of the route description are really not needed. The character of the stairway is more or less all the time the same, straight sections and comfortable turns exchange. You go all the time through a nice forrest, along the path there are some nice rocks. Due to its rich history, along the stairway there are many named places, each with its story. You can read about them on the description panel at the beginning.

From the parking place you continue along the creek bed, which is often dry. The cart road crosses it and after some 1 km reaches a small hut where the stairway starts. There are panels, describing the famous trail. Then you start ascending towards the west and later south-west. Beautiful stairway with its steady monotony soon turns you into a trans-like state, unless of course if you start jumping around, searching for best positions to take photographs. You pass a chapel-like cave by the path, a narrow, short rock gorge, the direction only rarely changes. In the upper part the path does more long turns, there are the most picturesque scenes. And then you are already out on the meadow below Sasso.

See also the GPX track in the header!

If you have a bike above, you can do the following tour:

You first bike up those 50 m into Sasso village, sipping perhaps a beer there. Then you continue towards Stoccareddo. When leaving Sasso, you notice a marked path, deterring from the asphalt road right down on Cala del Sasso. Over a flat saddle the nice road turns down and on the other side of a valley again up in Stoccareddo. You continue northwards, descending into Val Frenzela. Just after passing the bridge over deep valley, there is the crossroads. The shortest way to Foza is to continue by the main road. But you can also deter right, following the marked path towards Foza. You bike almost horizontally and even descending a bit, but this is a longer option. The cart road brings you quite below the town of Foza, into Tessar Sotto. From there you bike up on the main road and right to the picturesque Foza, riding a panoramic, grassy mountain ridge. The descent into Valstagna is then quick and joyful. You have some 800 meters of descent by a good, asphalt road, with many sharp turns.

When To Do the Tour?

You can hike Calà del Sasso any time of a year, but winter is least recommendable. Spring is nice due to fresh greenery, summer is nice because of hiding from hot sun into the woods, and autumn is perhaps the most beautiful, as elsewhere in the forrests.