Cerro Parido is an isolated steep volcanic neck at the north end of Chivato Mesa just west of the Rio Puerco Valley. Thought to be around 3 mllions years old, this mitten-shaped volcanic plug rises at near vertical angles from all sides and is covered with thousands of cacti of many different species. Such an environment makes this peak an excellent location for Golden Eagle nests.

The Jemez Mountains, the San Pedro Mountains, Cabezon Peak, Cerro Cuate, the expansive desert of the Chaco Canyon area to the northwest, and other interesting desert landmarks are visible from this peak. The easiest route consists of a long scramble, 4th class, and low-5th class climbing higher up the peak. The elevation gain is anywhere between 1,000-1,250 ft., depending on where you start the ascent. Since it is so far out of the way, even from the Cabezon area, this peak has nearly zero human traffic. 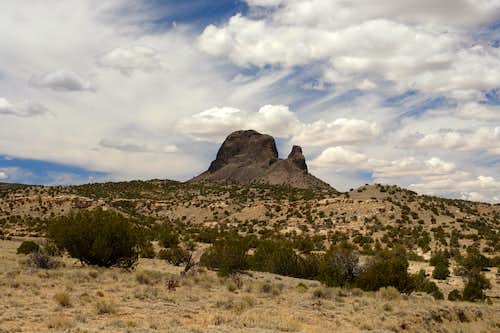 _Drive north on I-25 to Bernalillo from Albuquerque and take exit 242 onto US-550. Travel west through Bernalillo (1 mile), and northwest to San Ysidro (22 miles), and then an additional 19 miles to the turnoff to the villages of San Luis, Cabezon, and Torreon, which are on NM-279. It is a paved road for a couple miles past the village of San Luis and then becomes an equally wide dirt road around 8 miles from US-550.
_The main road takes a sharp turn to the right at a sign that warns you to slow down to 15 mph; another road you don’t want to take continues straight forward. After half a mile the road forks; stay right.
_You’ll pass Cerro Cuate and reach another fork; go left. This road goes down from a sandstone mesa to the Rio Puerco and crosses it at a one-lane bridge. Continue straight for another mile and turn right at a fork at the base of Chivato Mesa (left takes you south). Drive up onto the bench into the pinon and juniper. Immediately after a kiosk with a map, turn right. A series of descending turns lead to a gate, which may or not be open. It is okay to enter, just leave the gate as you found it after you pass through. The road travels further down into a small valley and climbs up another sandstone bench where it turns pretty rough (4-wheel drive/high clearance recommended). Another 3 miles of driving up and down gullies and bluffs will put you within striking distance. The closest road to the peak is actually to the northwest of the peak when the road turns south to cross a ditch.

There are no fees or permits.
For further information take the link below to the Bureau of Land Management Field Office in Albuquerque.
BLM Link 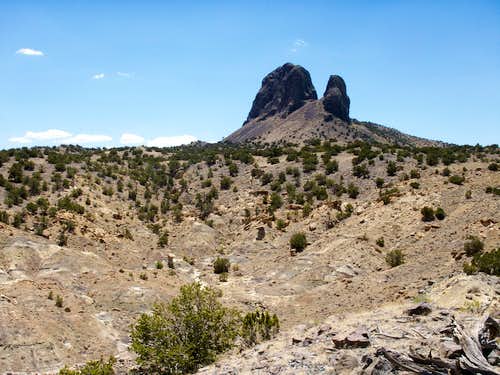 This picture was taken on top of a ridge in the arroyo halfway between the dirt road to the northeast and the peak. (June 10, 2006) 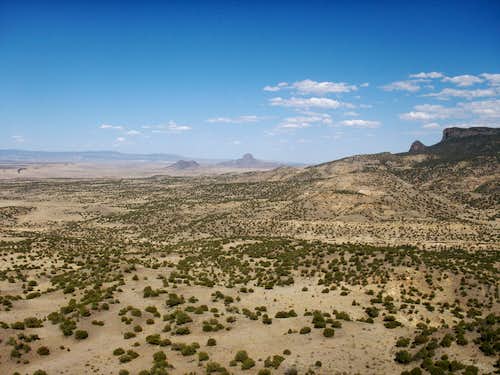 From the left to right: Cerro Cuate, Cabezon, and La Boca del Oso.
The picture was taken from the saddle between the two spires of Cerro Parido.

San Ysidro is the closest city or town to the Cabezon area at around 25 miles to the east.

The peak and surrounding areas are on BLM land and there are no camping restrictions other than the natural features. There are plenty of flat areas without cacti that can serve as camping sites. 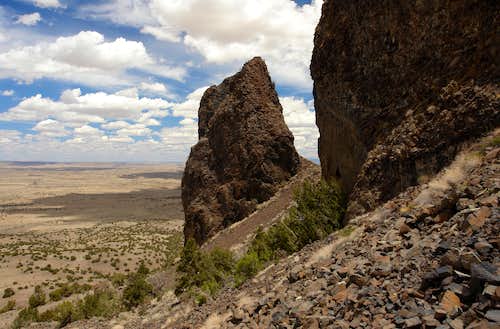