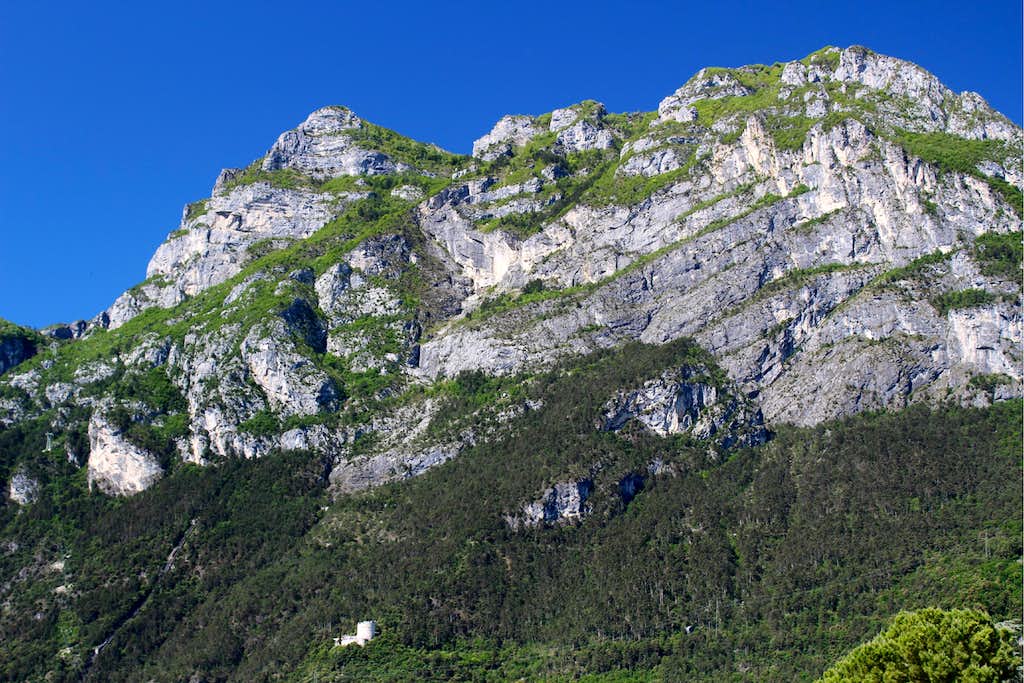 Cima SAT (Ferrata del Centenario Via Dell' Amicizia)
This route soars up from the old town of Riva del Garda for 1200m to the summit of Cima SAT, a rocky promontory overlooking Lake Garda.
The first part of the ascent is on a wide, cobblestoned path which later degenerates to a rougher path before the actual ferrata starts at about the 600m height. The route itself contains sections of walking, easy unprotected scrambling as well as sections of cable protected scrambling.
However, after completing the route, the overriding memory of your day will be the route’s two outstanding features, the spectacular views and… the ladders!

Airports – Verona is the nearest International airport but Venice and Milan are not too far away.

Rail – The nearest station is in Rovereto

Bus – Various bus routes from Venice, Milan, and Verona will take you to Riva and more locally from Trento and Rovereto.

There is a comprehensive bus timetable running from Riva with many different routes however, some buses only run at particular times – “only during work days”, “only on schooldays”, “not on Sundays” etc. – make sure you check the timetables (and understand them!) before setting off if you are relying on a bus, particularly at the end of your day.


Ferry – It’s possible to arrive at Riva by ferry from many towns from Sirmione and Desenzano at the southern end of Lake Garda up to Limone and Malcesine which are quite nearby.

Car – Many possible routes but the most accessible is from the East. From the A22 motorway, leave at Rovereto and pick up the SS240,heading West towards Lake Garda.

Riva del Garda is a magnet for visitors from all over the world and consequently, there is every type of accommodation on offer. There are campsites in the Riva vicinity itself as well as in nearby Arco.

It’s possible to rent an apartment, a house or stay in whatever degree of luxury hotel to would like (and can afford!).

As well as Riva and the towns already mentioned above, it’s possible to stay in Limone and Malcesine, they are both a short bus or ferry ride away.

If you are driving in to Riva for the day, arrive early for a parking space as these fill up quickly. Often it’s better to use public transport or just walk into Riva to the start of the route.

One of the most easily identified features of the route is the Bastione, a large white castle – like tower on the cliff overlooking the town. Head towards this and look for the SS45bis road (the road route to Limone). Path no 404 up to the Bastione starts very close to the road tunnel heading towards Limone. Both road and path are signposted in the town.

Path 404 rises up in a series of long zig-zags towards the Bastione and is a popular and well-constructed cobblestoned path. Some people will be visiting the Bastione itself for it’s historical interest and for the views over the town.

From the Bastione, path 404 becomes a rougher and narrower mountain track, ascending the steep, wooded slopes below the huge cliffs above.

Continue on Path no 404 towards the Capanna Santa Barbara, a Rifugio/bar set in the trees although, it is not always open.

Just above this, the route levels out and you will see a large sign proclaiming the start of the Ferrata del Centenario Via Dell’ Amicizia, turn right here and walk to a small clearing to put on your harness, helmet etc. just below the start of the route.

(It’s worth mentioning that instead of turning right at the above-mentioned sign, you may want to turn left and visit the Chiesetta Santa Barbara, a chapel constructed as a War memorial which is lit up at night and visible from the town, before returning to the start of the route.)

Once you are ready to start, the route ascends through the bushes on a rough path with the occasional scrambling moves. At the longer sections of rock, there is cable protection and as you ascend further, a few steep drops. Each rocky part is interspersed with more steep walking. The climbing here isn’t particularly difficult but the route is usually quite busy so you are likely to catch up with those in front of you or be caught by others coming up behind. If you are moving slowly, this is a good time to let faster ferratistas pass you, hopefully you will be extended the same courtesy by any slow moving groups in front of you.

Soon, you pass through some trees to reach a high cliff and the first of 8 ladders. 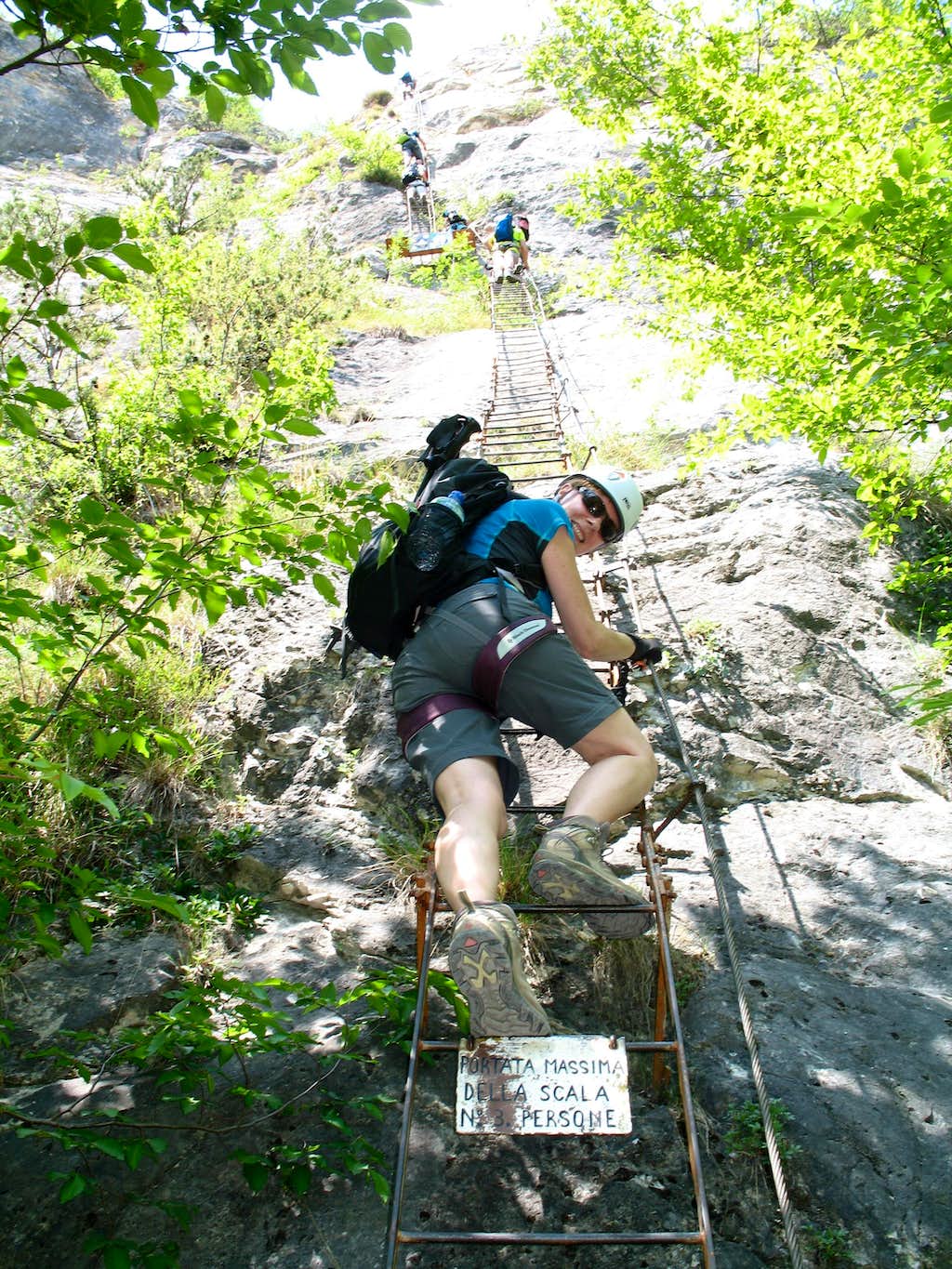 All the ladders have a sign on them advising that only 3 people should be on the ladder at any one time. This is good advice but not everyone heeds it.

Ladder No 1 (20m) – This starts up a slabby wall of rock at quite a reasonable angle and you emerge from the trees into the sunshine. As you continue upwards, the angle steepens and as it does, the exposure starts to increase. At the top of this ladder, you need to step leftwards onto a wobbly, hanging platform and clip straight into the next ladder


Ladder No 2 (15m) –Continue upwards, this ladder is at a steeper angle and by now you are well above the tree tops. It is steepest at the top and so it is a relief to step off the ladder and back onto a rough path.

The path wends its way up through more trees, heading rightwards and towards the next cliff. Looking up, you will see a long ladder attached to the cliff and ferratistas slowly heading upwards. You will reach a short, rocky corner. 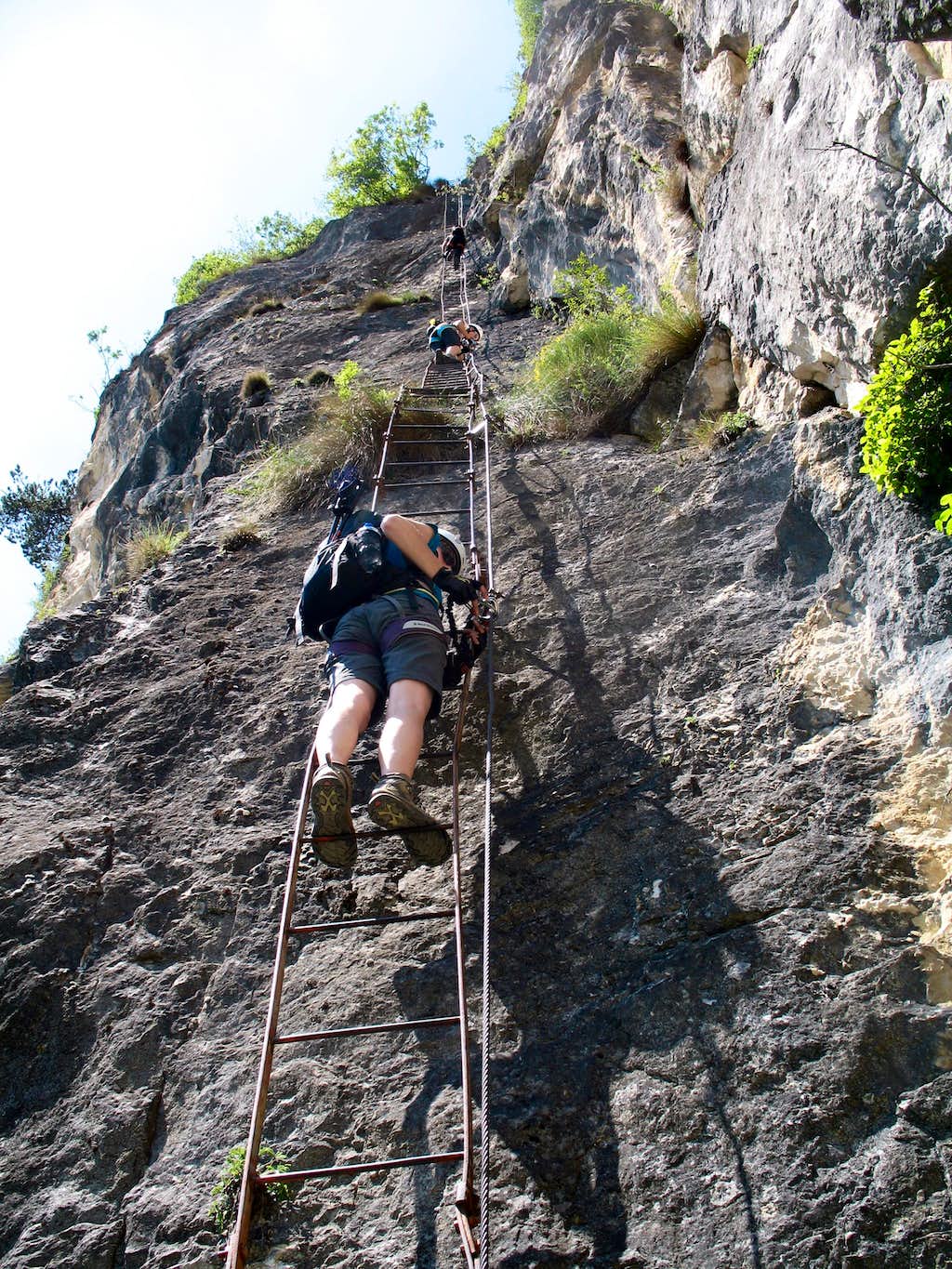 Cima SAT (Ferrata del Centenario Via Dell' Amicizia)
Ladder No 3 (7m) – This is a short obstacle at an easy angle and you will pass it quickly. Scramble up to a platform and the bottom of the next ladder. Take a deep breath and look up.

Ladder No 4 (40m) – This is the longest of the ladders and is set on the edge of a rocky slab which rises up to the left of the main face. It starts at an easy angle but again, it soon steepens and soars upwards. To your right is the main rock face, a few meters away. To your left is Riva del Garda…about a 1000m below you! Pace yourself, and keep going up. As you reach the vertical section towards the top, you will start to really feel the exposure!

Ladder No 5 (10m) – After the last ladder, this one is another short, easy obstacle up a sheltered slab.

Again, you are back on the rough path, heading upwards through the trees.

At one point, you might catch a glimpse of the Cima SAT summit (your destination) with a small, metal Italian flag on the top. Scramble up towards this but it vanishes as you move closer towards the steeper rock seen through the trees.

Scramble up to the steeper rock and to a ledge. Move rightwards along this and around the corner to an airy promontory with spectacular views over Lake Garda, Riva and just about everywhere Northwards into the Sarca valley.

Turn back to the rock, there is a short scramble with a couple of stemples and the next ladder. 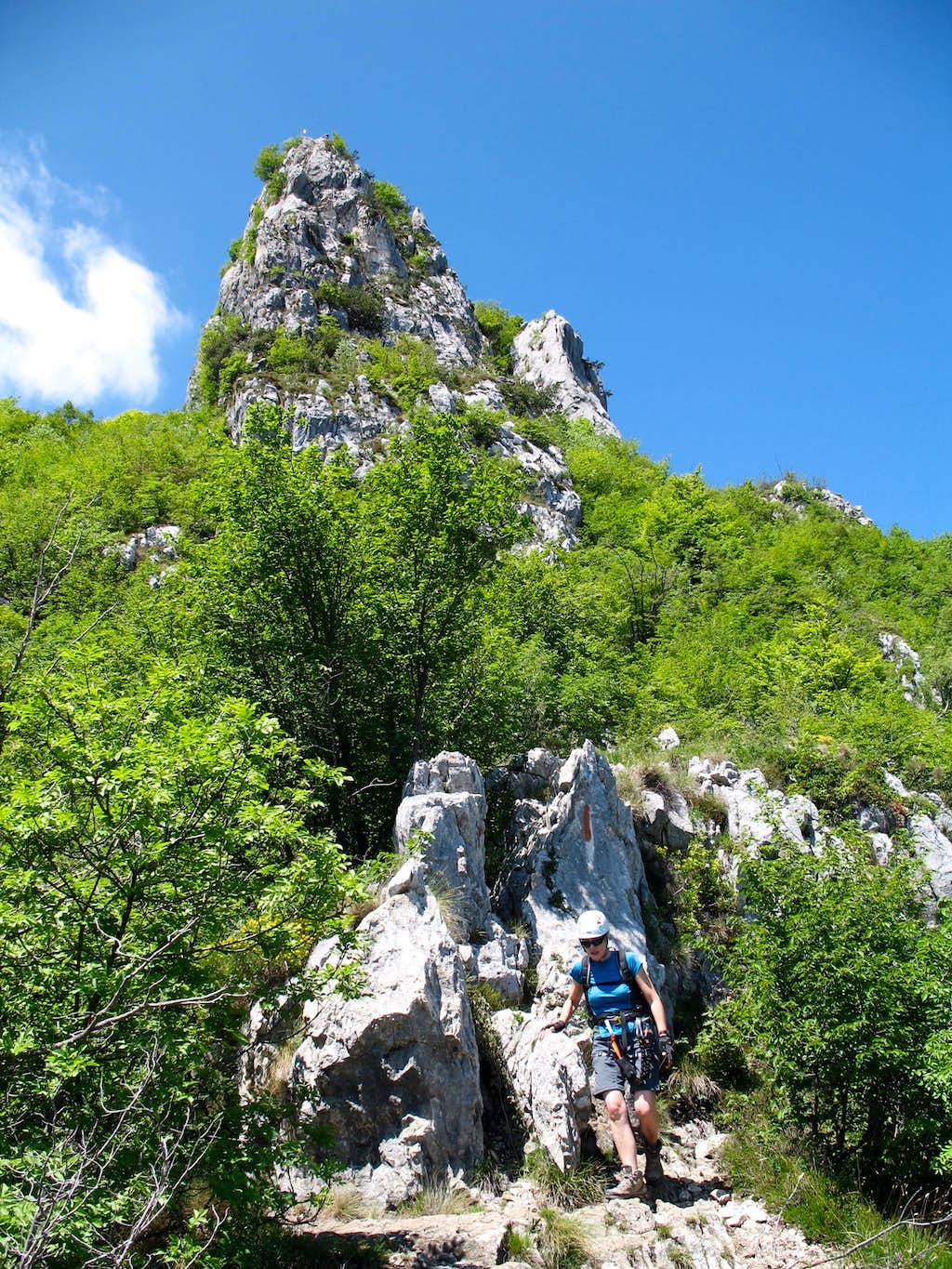 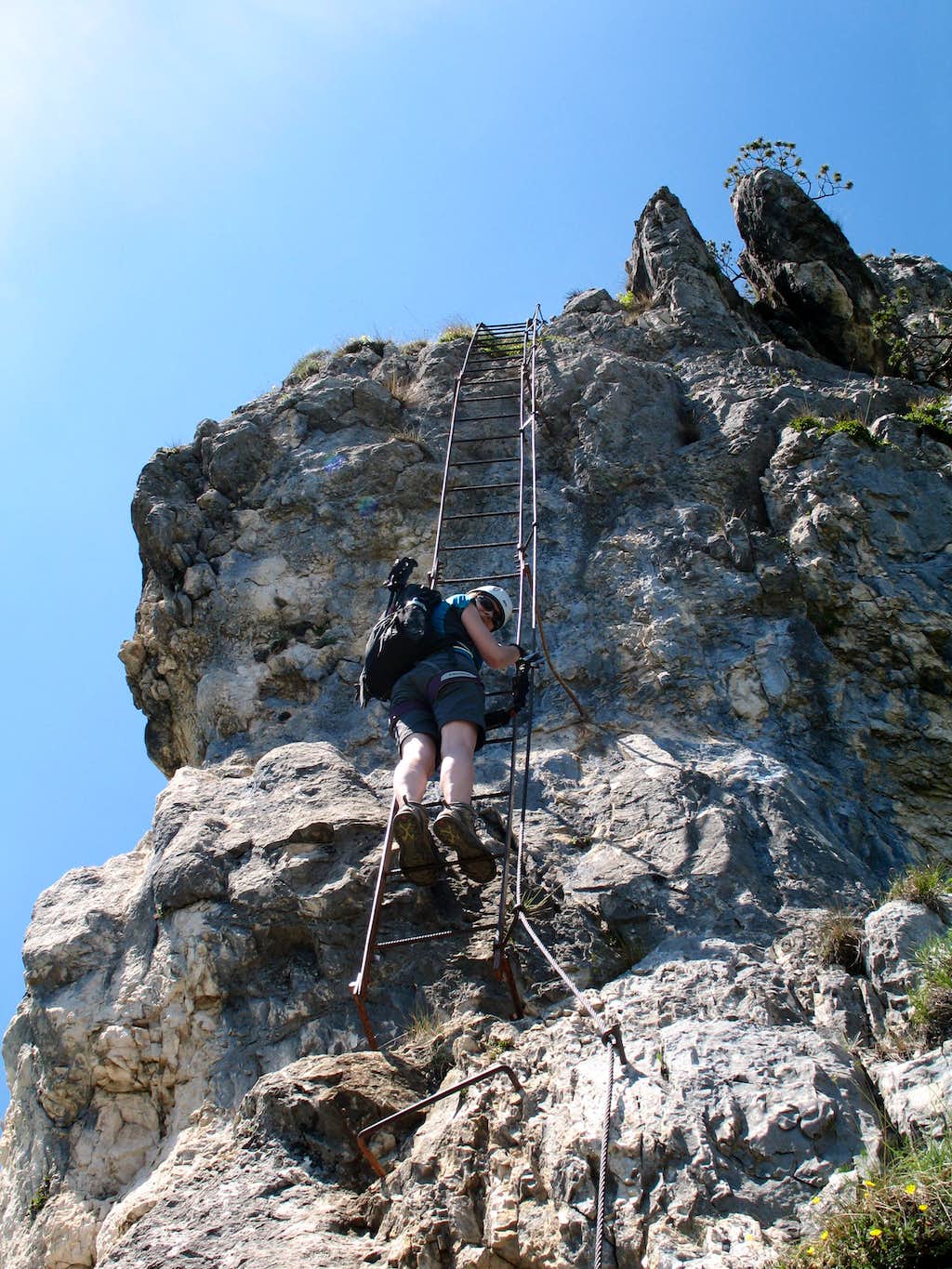 Cima SAT (Ferrata del Centenario Via Dell' Amicizia)
Ladder No 6 (10m) – This is a steep ladder on an exposed, rocky buttress but it is quite short. Very soon you can see over the top and onto the last 2 ladders and the Italian flag beyond.

Ladder No 7 (7m) – A short, easy angled ladder in a fabulous position. Time to get your camera out and give it to whoever is at the front of your group so they can take a picture looking down at you with all of Riva del Garda behind you! 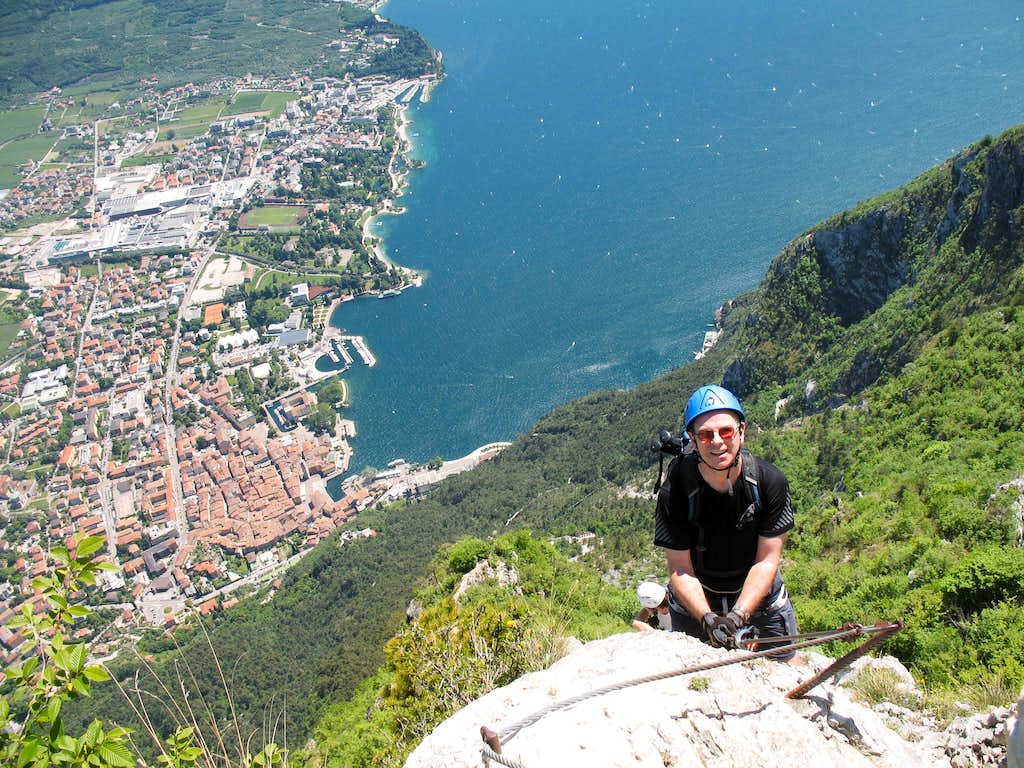 The summit is relatively flat outcrop with the metal flag set on a small, rocky podium and plenty of room for several people.  This is a good opportunity to admire the views and sign the summit book.

You still have to get down so don’t relax yet.

From the back of the summit block, the route descends steeply down a short rock face. There are some aids to help you (stemples, iron stantions etc) but mostly you are relying on highly polished limestone holds. It’s ironic that as you have just climbed up approximately 110m of ladders, there is no ladder to help you down the last bit!

Consequently, this is probably the hardest actual climbing of the whole route!

There is a flat area at the bottom of the rock with some trees for possible shade. A path disappears to the left of the trees and a signpost gives you two choices.

To the left, it’s possible to pick up path’s 413 and later 404 to take you on a steep but direct route down to Riva, parallel (but easier) to your ascent route.

This is the most popular descent route and according to the sign post, it is 2 hours back to the Capanna Santa Barbara. However, there is a section of stemples along the way which could act as a bottle neck to slow the descent. From there, follow your original ascent route (path 404) down. 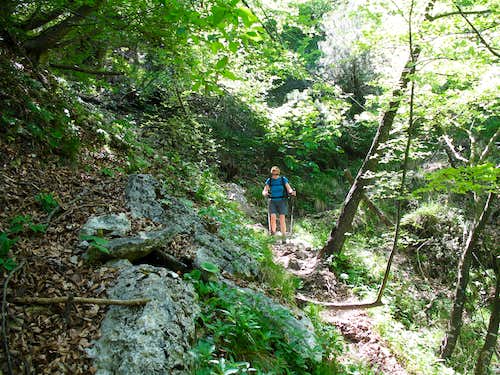 The route to the right, lets you descend on path 418, a shady, easy angled path with more fantastic views of the Sarca valley along the way.

Then, later join the Sentiero della Pinza, past Torrione San Giovanni and down into Riva.

The signpost advises 2 hours all the way from Cima SAT back to Riva del Garda but I think that 2 ½ hours is more realistic. The downside is that you will be sharing the route past Sentiero della Pinza with speeding cyclists!

It is all well signposted and once back in the town there are plenty of places to celebrate your fantastic day.

Full ferrata gear is essential along with water and suncream as you will be in any sun all the time.

Also, it’s worth taking a bite to eat for sustenance although, there are no good picnic spots once the actual ferrata has started until you reach the summit.

If you don’t take a camera, you will regret it!