Classic view of the... 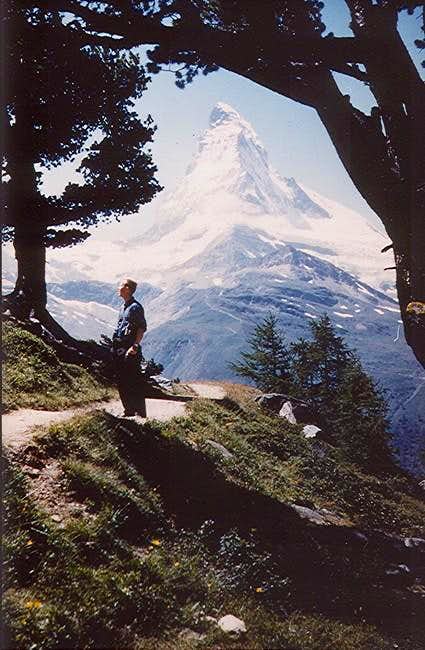 Classic view of the Matterhorn two days after the figure in the foreground stood on its summit, August 5, 1955.
« PREV NEXT »

Wonderfully framed and composed. There’s also something special about vintage alpine pics (in my book anyway).

This picture in black-and-white I originally admired in a magazine advertisement in 1950. I sent away for it and the advertisers kindly sent me an enlargement. I framed it and hung it on my livingroom wall.

On August 5, 1955, two days after I had climbed the Matterhorn, I was following a trail above Zermatt that angles southeast toward the Gornergrat when I recognized the very same scene depicted in the photograph. I mounted my Leica C-3 on a tripod, framed in the same composition, pressed the shutter button of my Leica and ran into the scene for this self-timed picture.

It's reassuring to know that there are appreciators of mountains that have the same sensitivity as I had when I took this picture over fifty years ago.

I have to say the old pictures with their sometimes garish colors do, for some reason, a better job at creating an environment that you just really, really want to step into. The heather on the ground looks inviting. The people seem to have less cares. No one is trying to impress anybody. It looks like a wonderful world. Good job re-creating it!

Your story behind this photo just adds to how great it is. Really one of the best photos on SP even at 53 years old.