Tim and I started talking about climbing Hat Mountain in 2011. It was the highpoint of Lassen County, where we live, and sounded like a fun adventure. We knew it wasn't a very popular peak in the summer, and decided that a winter/spring ascent would provide a nice challenge with a good chance of complete solitude. So we decided to make it happen, and penciled in a late March weekend for the hike in our calendars. Then after seeing the mountain from the top of Hot Springs Peak in early February 2012, we were definitely ready to check it out. We also discussed the challenge of climbing the east face, which was the steepest part of the peak.
We had shared the idea with a couple friends, and eventually our friend Matt said he was up for the climb and joined in.

The driving approach to the peak was going to be the first part of the adventure. This remote area in the NE corner of California has a mix of public and private ownership, with the majority being owned by the Modoc National Forest (where the actual summit was located) and the Bureau of Land Management (which covered most of the approach drive).

We decided to try and drive as close to the peak as we could, camp out, and scout the actual route line that we would ascend to the top. There are a lot of roads in this area, most of them generally unmaintained and requiring 4wd vehicles. We worked our way northeast from Susanville, eventually finding a BLM road that accessed the east side of the mountain. 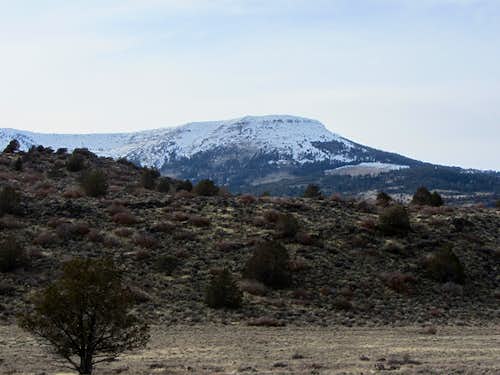 Hat Mountain, approaching from the southeast

We forded Bare Creek and made good progress up the east side of the mountain. 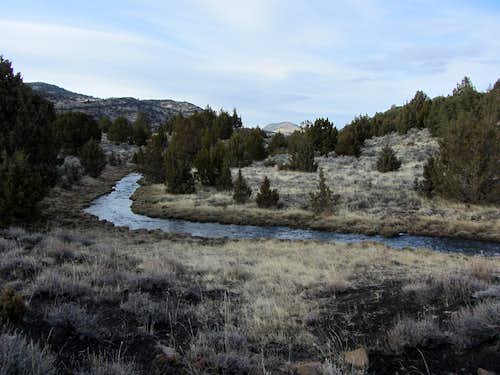 Bare Creek
After gtting a close-up view of Hat Mtn, we recognized that the east face would indeed be a snow climb, and a steeper one at that. We drove closer and Tim's 4Runner made the challenging road sections look easy.

By late afternoon, we found a comfy grassy campsite approximately 2 miles east of the summit. From this camp we could see the peak, and decided on a line to aim for up the east face. 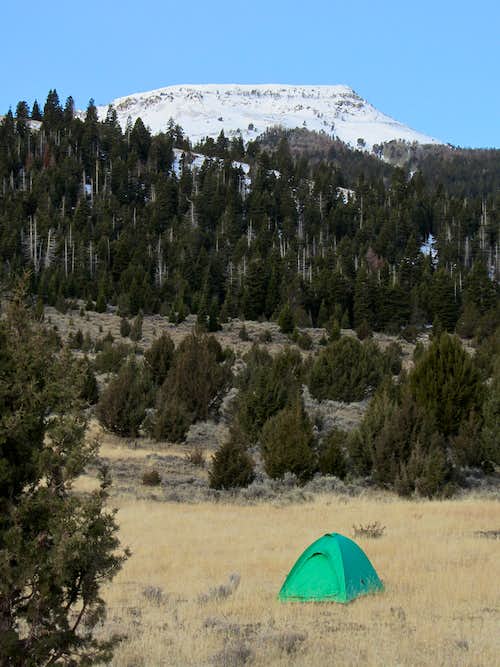 Camp below Hat Mountain and the east face
Here we made a juniper and sage campfire, enjoyed some deli sandwiches, and talked about the plan for the next day. 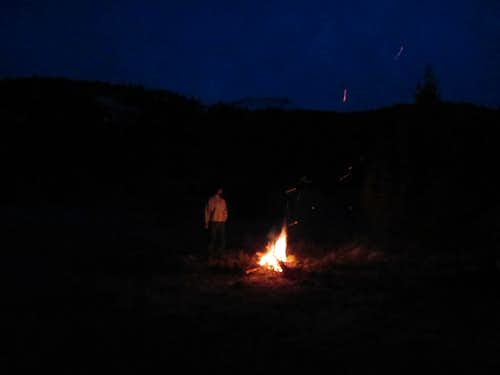 We awoke at sunrise and I was happy to see that the weather was still pretty nice and would make for a good summit day. 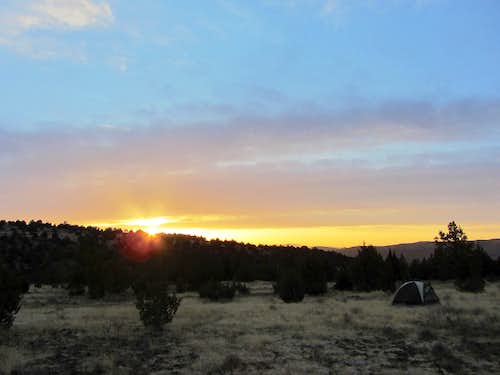 We packed our day packs and headed east toward the peak, aiming for a ridge that led up to the northeast face. We first passed through sage meadows, and quickly crossed a better road than the one we had used to access our camp. We eventually entered a forest with white fir, ponderosa and lodgepole pine, as well as some aspen and mountain mahogany. We passed several roads along the way, and also saw lots of stumps - evidence of past forest management. We also found other traces of humans. 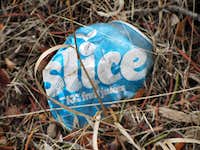 We crossed a ridge and a small drainage, eventually gaining and climbing the ridge we intended to access the summit. After some patches of snow and increased elevation, the snowcover became solid. We then decided that we could follow a gully, taking advantage of solid snow and less trees to navigate through. This gully led us directly to the open snow slopes of the east face. 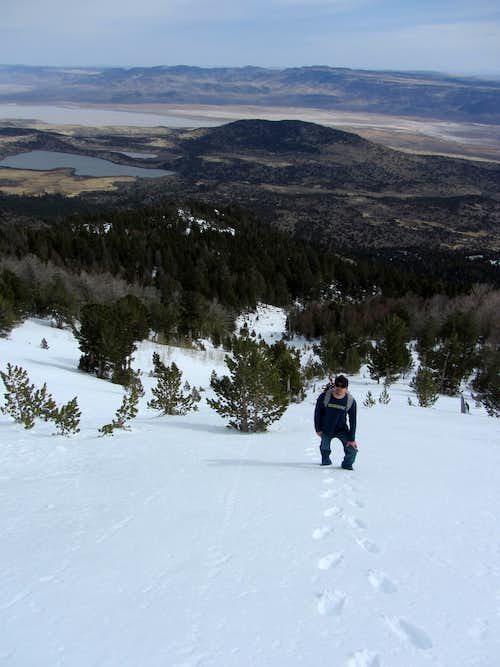 Matt ascending the east face
The slopes quickly transitioned from moderate to steep, with the steepest slopes near the top nearing 45 degrees. 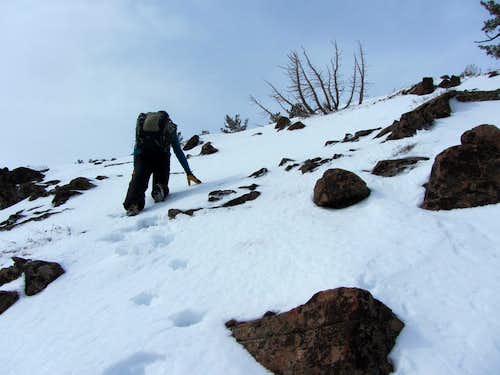 At this point I was glad to have brought my ice axe. From these open slopes the views grew, opening up vistas of Surprise Valley and more of the Warner Mountains. 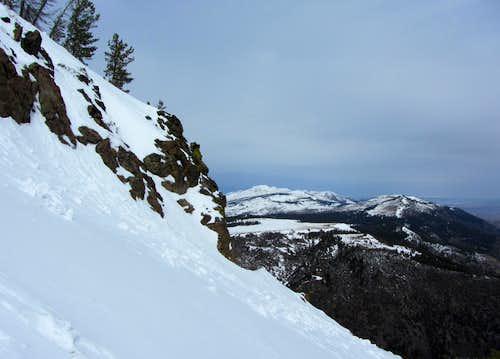 looking north towards Eagle Peak
It wasn't long before we climbed over the edge to the nearly flat summit of Red Rock Mountain, aka "Hat Mountain".

Reaching the expansive summit made for a dramatic transition. The chilly western winds immediately hit us, requiring us to bundle up before exploring the top. We first stopped by the northern highpoint and true summit, where we found a register and signed in. We were the first to sign in since October of last year. From here we could look down to frozen Lost Lake and the tallus fields of the north face.

looking down at frozen Lost Lake

From here we also had a great view of Eagle Peak and the South Warner Wilderness. We then strolled south a few hundred feet to another crest that appeared to be just as high. We passed rimed Krummholz trees along the way. Here we found another register, this one in a more unique container: a handle of JD whiskey. 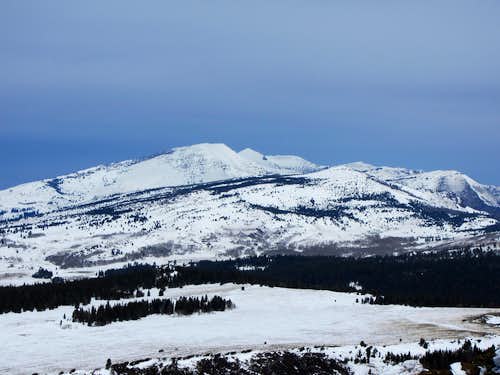 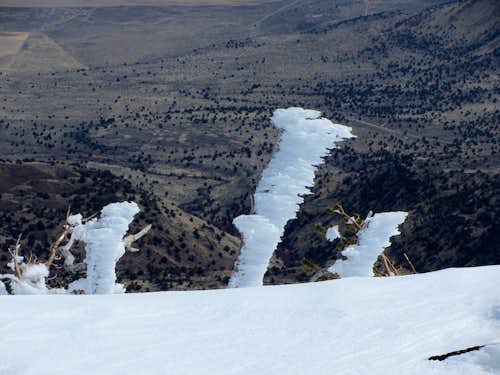 iced whitebark pine on the summit 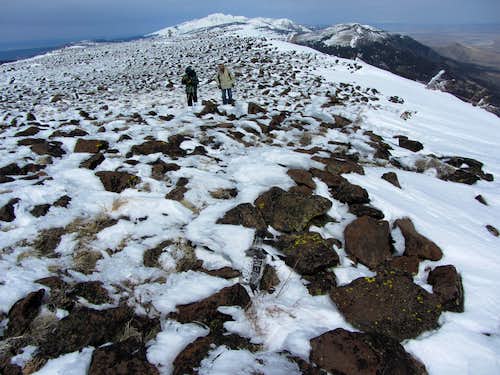 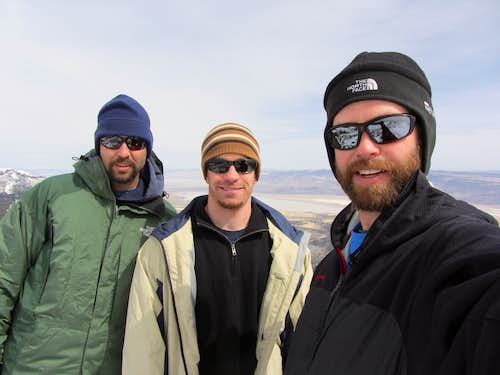 After taking lunch and shooting a few more pics, we chose a line to descend and dropped back onto the steep slopes of the east face. After a couple hundred feet the slopes relented, and soon we were quickly descending through the aspen and conifer forest en route to our sagebrush camp.

We made it pretty quickly down the mountain and back to our camp. We packed up and headed north towards Eagleville. The northeast view of Hat Mountain was interesting and hid the expansive mesa of Red Rock Mountain to the south. 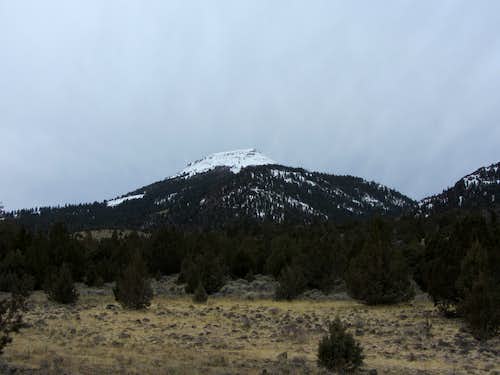 Hat Mountain from the northeast

After a few more miles of 4wd road, we encountered a good-sized (18" diameter) fallen aspen across the road. Luckily we had brought an axe along, and we took turns speed chopping our way through the tree. We made quick time of it, and soon were driving on the improved roads that lead to Lower Alkali Lake and Surprise Valley Road.

We looped home via the Buckhorn Backcountry Byway, a 31-mile BLM road that connects NV-447 with Interstate 395. This road was in pretty good shape and made for a scenic cut-across back towards Susanville. We made one last stop along the way to take in a great view of the southern Warners Mountains, with the expansive Red Rock Mountain & Hat Mountain dominating the scene.

We made it home in 2.5 hours with daylight to spare. We celebrated with some pizza and beer, as well enjoying a Sharks hockey game victory, before crashing for the night. It was a pretty neat local adventure that further opens the ideas and possibilities for mountaineering solitude in this neck of the woods we call home.