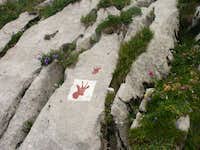 Pas de la Bosse, 1816 m, where the route starts, can be reached from 3 directions:

Up the couloir to the grassy ridge 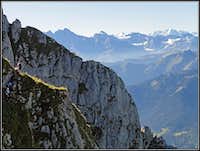 From Pas de la Bosse you take a marked path which goes towards the east, across the slopes into the SW face of Cornettes de Bise. After a few minutes, the path turns up and goes in several turns up, all the time keeping in the Couloir du Saix Rouquin. The couloir is quite flat, but steep, so you gain altitude quickly. Reaching its upper part, you see a nice grassy edge where the path ascends to. From there views down into the valley of Bise open again.

There the path turns right, towards the walls of Cornettes de Bise. First it crosses a steep edge - the passage requires a short, easy climb. Then it continues across the slopes and up. Some passages still need some care, but overall the ascent is easy. So you gain the SW ridge of Cornettes de Bise.

The view from summit ridge

The summit ahead of us

The path continues by its right edge and gets more and more panoramic. Before reaching the highest point it descends for a few meters. There's another passage, where you need to climb a bit over the rocks. Then the path reaches the summit slopes and ascends in several turns on top. Notice an opening in the rocks on the left making a window looking at the Bise valley before the grass covered summit.

> Good shoes and poles.
> Rope for children under 10 years.