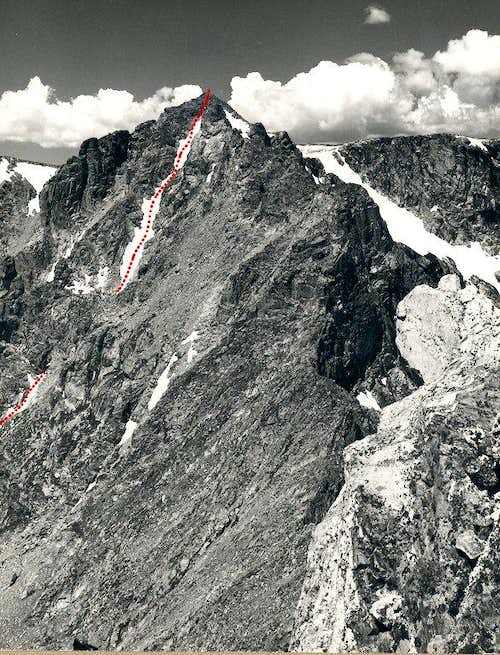 Ogalalla Peak from Elkstooth showing our line of ascent in 1972. We were told then, it was named "Dalkes Couloir" presumably because Larry Dalke had done the 1st ascent.
Ogalalla Peak via ‘’Dalkes Couloir’’
Rocky Mountain National Park
Elevation: 13138 ft / 4004 m
Best months to climb: Mid May through mid July.
Difficulty: Steep snow


Located at the southwest corner of Wild Basin, this remote summit is the southernmost thirteener in Rocky Mountain National Park and overlooks four separate draineges. It is the highest for many miles around, and because every approach is long, it sees few ascents. It is connected to Elk Tooth by rugged ridge spiked with rock towers. 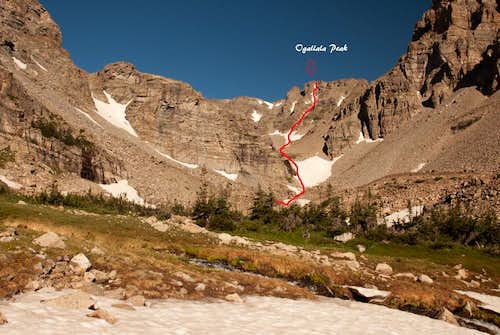 Ogallala is rugged, challenging and rewarding peak.
The peak got named officially in 1914. Like other summits in the IPW, it bears the name of a Native American tribe. In the Lakota language "Ogalalla" means "they scatter their own." There are a few spelling variants, including Oglala and Ogallala. The boundary between RMNP and IPW ran north of Ogalalla Peak, before it was moved to coincide with the watershed between Wild Basin to the north and the Middle Saint Vrain Creek drainage to the south. Wild Basin is the drainage of the North Saint Vrain Creek. 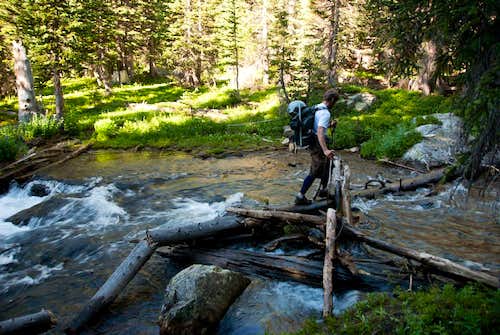 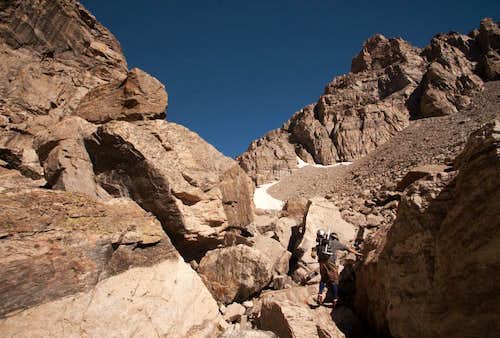 Route Description;
From the Middle Saint Vrain Trailhead, hike up the Saint Vrain Glacier Trail to 10,900 feet. Continue west under Elk Toot's south face to the base of Ogallala's southeast face at approximatly 12000 feet. 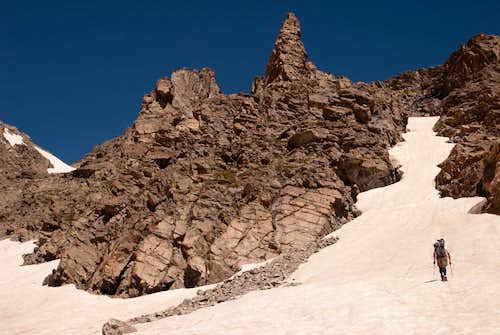 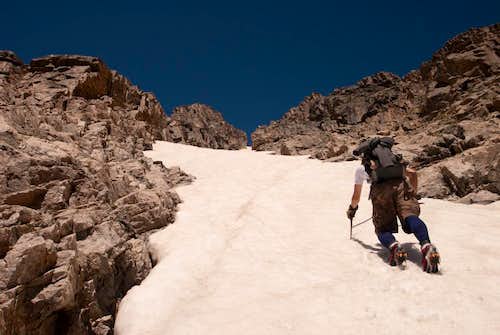 From the basin, head up the obvious line in the center of the mountain. The angle is constant, averaging 40 degrees, with occasional steeper section that may locally reach 50 degrees.
Climb is straight up and forward, and at the end of snow line there is in another 200 feet of 3 Class scrambling to the saddle, continue to the left before you reach summit of this beautiful mountains. Views are fantastic.
Late in the season snow line might be free of snow for 100 feet or more approximately in center of the slope. This is not recommended route once snow on it has melted. 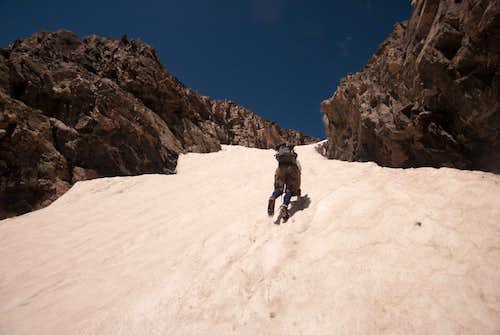 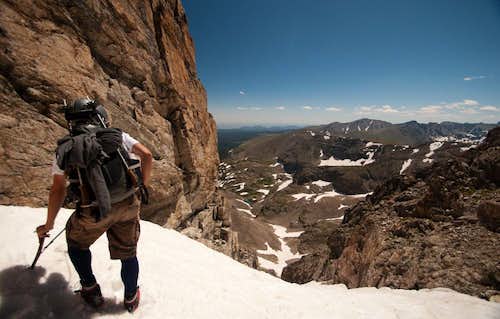 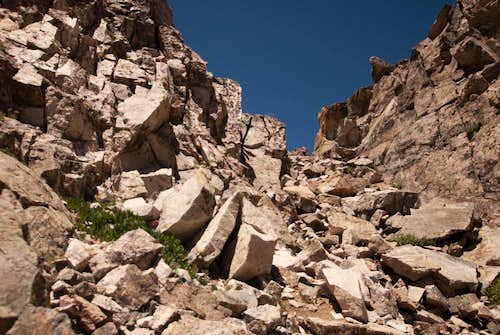 From the summit go west toward saddle between Ogallala and Elk Tooth descet and climb down back to Saint Vrain Glacier Trail. 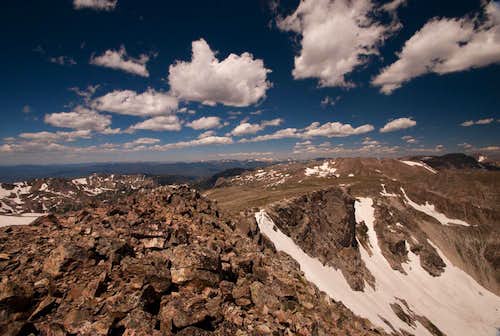 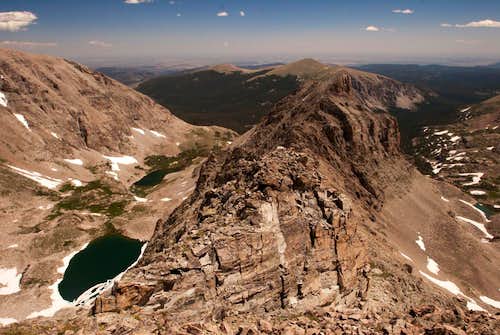 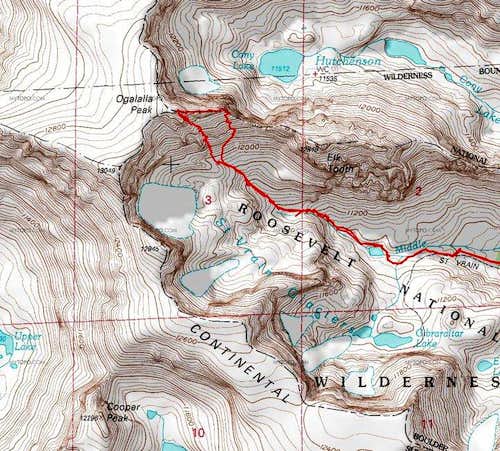 There are several camping sites within Rocky Mountain National Park and specifically in Wild Basin. It is usually easier to get permits for Wild Basin than for the rest of the park. Details on locations, facilities, reservations, and fees can be found at the camping page of RMNP. Bivy information can also be found on the park's site.

The Indian Peaks Wilderness is divided into zones. Different restrictions apply to different zones, and the rules in effect depend on the time of the year. Refer to the Indian Peaks page for camping sites, rules, and printable forms

The Indian Peaks' contact information page and the Rocky Mountain National Park's contact information page list useful addresses and phone numbers. Two webcams, one pointed at Longs Peak and the other at a stretch of the Continental Divide, and a webcam on Niwot Ridge also allow one to get an idea of the conditions not far from Ogalalla Peak. Detailed forecasts are provided by NOAA.
Never forget that the weather may change very rapidly in the high country. The temperature may drop by 50°F or more in a couple of hours. Those who have been caught out by such sudden changes without proper equipment and preparation have not always survived.