We chose this route for adventure - trying to avoid standard routes on walk-ups.  After studying a map, it was clear that a pretty clean NW ridge would lead to a false summit, and that the actual summit ridge could be accessed from there.  There were no reliable trip reports or route descriptions, though a few Ski-Mountaineering sites made me feel like it was doable.  People have certainly done this route, they just haven't written about it.  We used only a map and compass for our trip - we knew that, once on the ridge, staying ESE would ensure access to a subpeak and a clear route to the top, and that the return would require us to stay WNW or find our path out.  This all worked as planned, but we would have preferred the comfort of a few GPS waypoints on descent in order to avoid a circuitous route back. 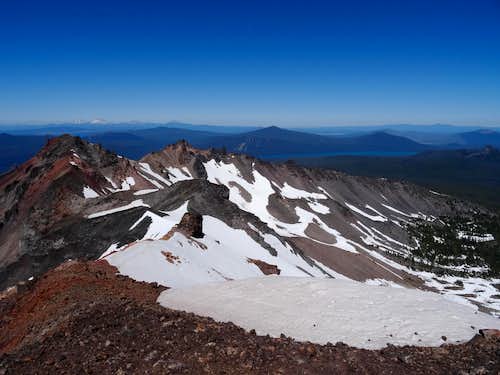 Looking North from the summit

We accessed the Diamond Peak North Trailhead by driving 22 miles on Forest Road 23 just out of Oakridge, OR.  The road is narrow but paved much of the way.  Due to the curves, it was slow going, but fine in my low clearance passenger vehicle.  The trailhead is marked by a small sign, with only parking for a few vehicles on the shoulder.  Up the trail is a Wilderness Permit box and signage for the trail.

We walked trail 3699 for 2.5 miles.  The trail did not gain much elevation, starting at about 5000' and meandering along the foothills of the mountain.  There were some downed trees that were easy to hop over, and evidence of prior years' trail maintenance.  From the TH to almost 7000', there were mosquitoes where ever there was shade, and they were large and aggressive.  Strong DEET was effective, except for anywhere the DEET didn't touch.

The bushwhack began exactly at the intersection of 3699 and Happy Lake Trail 3653.  The sign for the trail is actually at the foot of the NW ridge, on a tree.  We left the trail here and began to mount the ridge, at about 5500'.

While we started the ridge at a low spot, we soon found the steepness was not worth traversing sideways and went straight up.  The ground throughout the area is pretty exposed, with no ferns and few bushes, making it easy to look for a route.  However, the sides of the ridge are sandy and not fun to walk on.  The top offered more secure rock.

Once on the ridge, we saw some lost gloves, which was comforting - we weren't the only ones who attempted this route.  It was not comforting that they were in a small cave.  A mountain lion den, I decided - the last poor soul who tried this route.

We zigzagged a bit when necessary, but stayed on course.  The ridge undulates, and there are some impassible rock fins at parts, which can easily be skirted by dropping down a few meters.  There was snow at times, too. 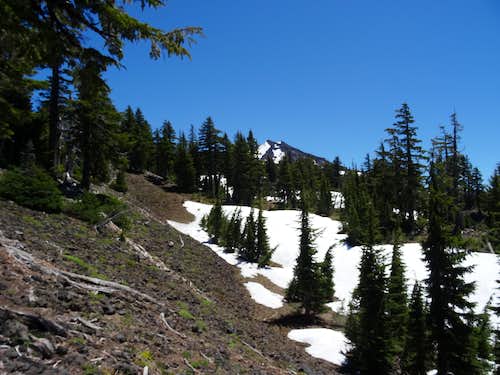 emerging from trees, the 8300' false summit on the right

It took nearly 2000' of elevation gain to leave the trees mostly behind.  From tree-line beyond, the primary danger of this route was loose rock - not really falling rocks, but rocks that would teeter with your weight.  Huge basalt slabs rested on brittle scoria, such that whole sections would start to slip.  I stopped a fall a few times, as did my partner, caused by shifting rocks.  I was also hit by my own rockfall on descent - dislodging big rocks was frighteningly easy.  Falling in many places would not have meant death, but any injury could be serious this deep into a relatively quiet wilderness.  We did not see anybody, all day.


At 7500' we could finally see a false summit, an 8300' pinnacle of sorts - more like a hill of rocks.  Climbing to the top was unnecessary - the saddle connecting this subpeak to the actual summit ridge is at 8000' or so. 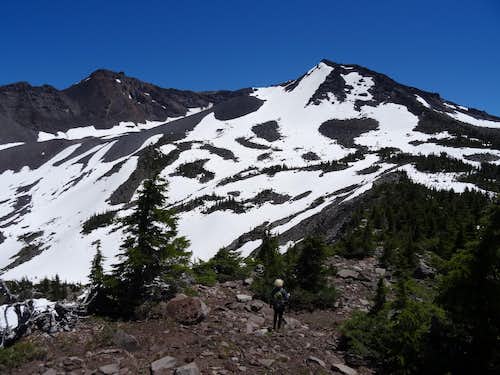 Upon meeting this saddle, we were faced with the climb up the to westerly summit of Diamond Peak.  It was about ½ up this that the scrambling began.  An awesome fin of gnarled basalt lines the ridge, with a pretty steep drop off into the North/Northwest bowls.  The West/Southwest side of the mountain is not terribly steep, but filled with sand and basalt plates.  It was easiest (and most fun) the stay along the ridge as much as possible, where the rock was more solid.  This choice required class 3 travel, maybe a few class 4 sections, and some rockfall danger.  This seemed easier than the loose scree and tumbling rocks.  This rock formation almost extends for quite a distance - maybe 100 meters, with jagged rises and drops along the way.  This was my favorite part of the hike! 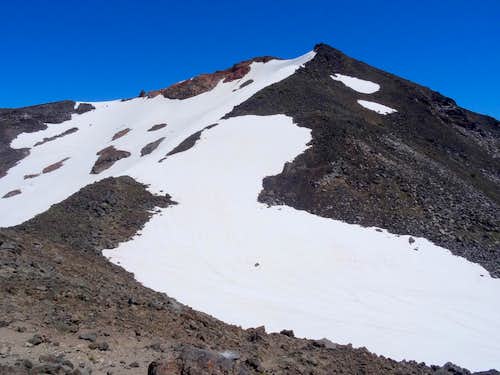 looking at the final push, actual summit hidden. We pursued the big rocks on the right ridge, rather than cross the snowfield.  Bad runoff and hidden ice.

At the summit, there were views of Mt Scott and Thielsen to the South, Sisters and Broken Top to the North, with a distant Mt Washington. 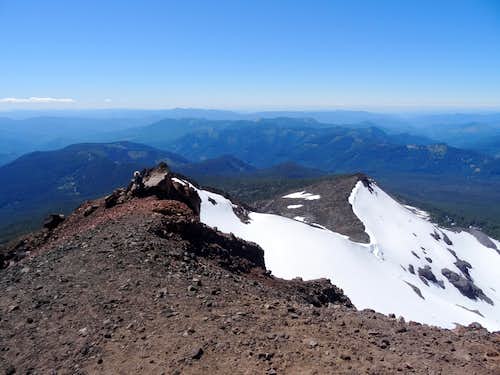 looking back at the summit ridge

On descent, we tried to 'take a shortcut', which was the primary lesson of the day - when route finding, return the way you came.  We ended up crossing an awful snowfield with ice under a few inches of soft snow.  Not fun without crampons, and we got across and back on track as quickly as possible.

In summary, it was an awesome day, and a fun route for someone with route finding know-how.  Lots of mosquitoes, and maybe a little better with some snow earlier in the summer - June might offer more snow travel without too much gear.  If you like scrambling and making decisions about the 'best way' up something, it's worth a few hour drive.  There were also spots to camp along the ridge - out in the open, alone.

I enjoyed reminiscing about my scramble up there from the SE side in 1980. Had a few problems with colloids if I remember correctly, but all in all, very pleasant outing.

Although we called it the "upper" SW ridge. Photos and description look similar.