This is one of the "real" ascents on the migty Dobratsch massif, so not coming on top only from the parking place high on the mountain. There are a few northern ascents, marked paths are coming on top from Bad Bleiberg, from the nearby Bleiberg Nötsch and from Heiligengeist. The villages even more to the west can be considered already as trailheads for the west ascents. But the upper part of those ascents is identical to the ascent from Bleiberg Nötsch. I will describe more in detail only the ascent from Bad Bleiberg, other routes will serve us as descent alternatives.

The Bad Bleiberg ascent is a quite high hike up, but not a very attractive one. It goes first through the woods, then over a scree filled valley, finally exiting on the summit plateau.The only real attraction is the expectation of splendid panorama from the top.

About the name: The ascent route from Bad Bleiberg is called also "Alpenlahnersteig" (by the name of the high valley). 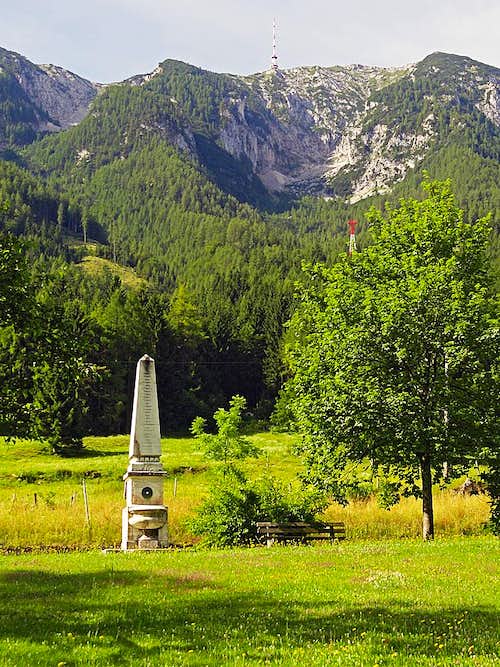 Dobratsch from Bad Bleiberg. The Alpenlahner route goes by the left ravine.
Difficulty: On the plates in Bad Bleiberg and on web pages this ascent is graded as "difficult". But there is really nothing difficult in it. The path is well marked, well beaten and nowhere exposed. On the Swiss Hiking Scale it would be graded T2. A bit longer ascent should not go into the technical rating of route difficulty.

Slope orientation: The ascent slope is north oriented, so the route is on some places shady also in summer. The final 10 minutes of ascent go by an east oriented slope (so towards the west).

Objective dangers: In summer conditions there are really none. On a ski tour due to northern exposition and steep terrain conditions must be really good, safe of avalanches.

Best season: Summer months, normally from July till October (or first snow). In good conditions this route is done also as a ski tour. The upper part must be ideal, especially in powder snow (Feb-Apr). Coming down through Alpenlahner, the valley gets more overgrown. I guess there you must ski down by the left side, where the marked path also goes. There the wood is more dense, but soon it gets better and lower down also cart roads help you to ski down to the town comfortably.

Tour start: Bad Bleiberg, 907 m. Free parking places there - in the middle of the town. 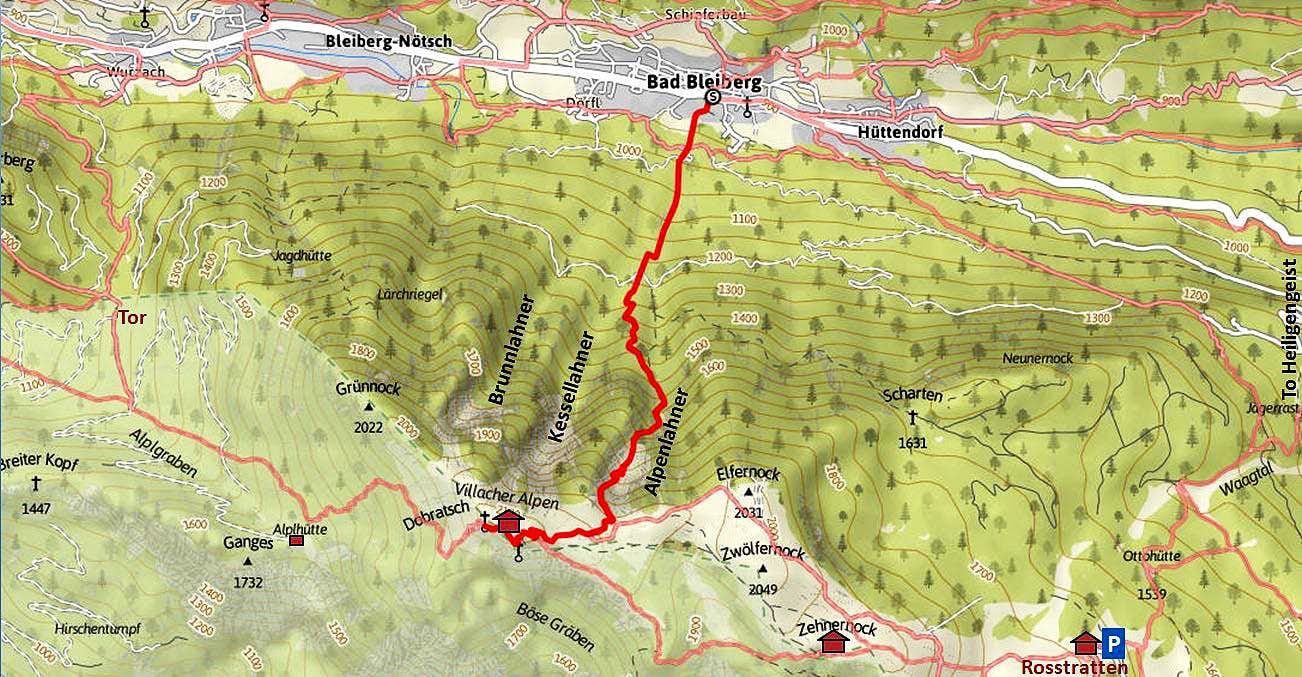 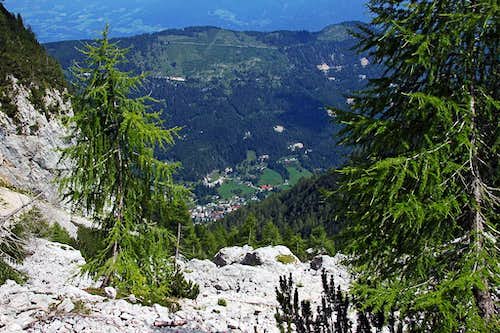 In Alpenlahner valley
From the parking place you follow the inscriptions for marked path (No. 295): "Dobratsch" or "Dobratsch-Gipfelhaus" (summit hut). At first, the path leads you up the meadows, then by a small chapel we enter the woods and continue in the same direction. The hike up is moderately steep, soon we cross a forrest road and continue in the same direction through somewhat steeper woods. We pass a good water source and continue right of a distinct, broad valley. When later the path comes into it, we are still moving over forrested slopes. On the right are the rocks of a side ridge and so we approach a steep, rocky valley barrier. There the path turns a bit right, in a few switchbacks detouring the rocks.

Above the rock barrier the valley becomes again broad and the terrain is not overgrown any more. Nice larches only can be seen on scree fields and we are moving by the right side in many switchbacks up. In the middle of the scree valley (called Alpenlahner) a nice bench invites us to the rest. Then we continue up and in the last 200 meters till the valley exit the terrain is rocky. The path winds up by the easiest passages and finally we exit the valley on some 2000 m. There is the high plateau of Dobratch and from the left the broad path from Rosstratte comes. For sure there will be many hikers on it and together we go in the western direction - first to the big telecommunication tower, then to the nearby hut and on the highest point.

We can descend of course by the same route, which is the shortest and most convenient one. In that case we shall even take some advantage of sliding down by scree fields, but not a a lot though. A better advice is to assign to the hike one hour more and go down by some other route, doing so a round tour. Here are the options:

1. To Rosstratten and towards Heligengeist. This is first the easy, popular hike towards the E-SE, towards the big parking place and restaurant on Rostratten. There we turn north and descend by ex ski slopes towards Heiligengeist. But we don't follow that direction down till the main valley. Half way down from Rosstratten, we can keep left and catch the marked trail which crosses the slopes directly to Bad Bleiberg.

West route from the top

The summit from Kuhriegel
2. Western descent. This route follows the beautiful (at least in the upper part) west route. From the western and northwestern side at least 4 marked routes reach the summit of Dobratsch. Yet, they are different only in the lower part. In the valley, called Alpengraben, they all come together, then ascend the beautiful Alphütte and then go up on Kuhriegel (ridge, notch) and further on top. So, to descend there, you start by the western church (Windische Kirche) and descend very steeply by the marked path No. 296 towards the SW. On some 1980 m there's a God sign on the ridge (Kuhriegel), where the path turns sharp right and starts crossing the broad W slopes od Dobratsch. It goes across the slopes in a few long turns and only then starts descending in switchbacks more directly down - towards the Alplhütte (hunters hut), standing on a nice saddle meadow below Ganges (peak), 1732 m. On some 1600 m the marked path passes the hut (it's only some 5 min away) and continues descending towards the NW. It crosses a high forrest road and keeps descending by the right side of the rugged Alplgraben (ravine). When hitting the next road, marked path branches. To return to Bad Bleiberg, we must keep always right - chosing only marked paths, of course. That will bring us first on Tor saddle, 1140 m, and then northwards down into the main valley which we reach in Wurzach, near Bleiberg Nötsch. To Bad Bleiberg we have by the main valley still some 45 minutes of walk.