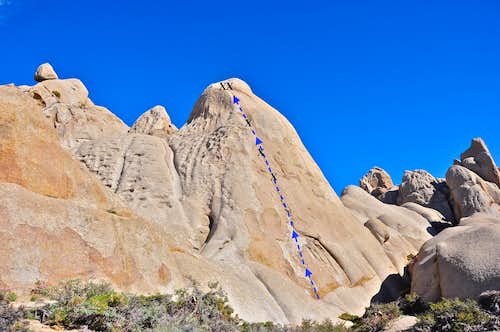 Dune is a formation in The Buttermilks Area of Sierra Nevada Range, California.


Although Dune is not the tallest formation in this area, it's definitely more noticeable than its close neighbors Skin Diver and Wrangler Rock. This prominence is due to its cone shape and its proximity to the Frontside Parking area. The first ascent of this rock was done by the Sierra rock climbing pioneer Alan Bartlette in 1986. Considering many more recent bolting practices, some as low as seven feet for the first bolt, this route may give some clues as to the higher standards of three decades ago.


This interesting formation does not get very much traffic due to the fact that it's not for the faint of heart. Dune has only one route, named Dune, rated 5.9, and that one route is badly runout. The greatest concern is getting to the first bolt which is nearly half way up the rock. Falling before clipping the first bolt can result in serious injury or death. Granted, reaching the first bolt is not the difficulty crux of the route, but it certainly is the psychological crux of the route. After the first bolt you have two more bolts to clip. Climbing this section is the technical crux of the route. You are moving mostly on friction with tiny crystals for your finger tips. The top of the rock, however, is pleasant and is equipped with two bolts for your anchor and rappelling back down to the base. 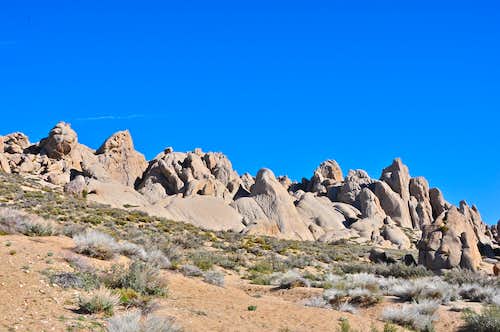 Basin Mountain on the right and Mount Humphreys on the left

From the town of Bishop California drive seven miles west on Highway 168, also known as Line Street, to its intersection with Buttermilk Road. Take this dirt road for 3.5 miles to where you begin to see many large boulders to your right. There is a large dirt clearing here. This is the Frontside Parking.

Park in the Frontside Parking area. Looking up toward the crags, you can easily pick out Wrangler Rock on the left, The Owl in the middle and Skin Diver on the right. Dune is shaped like a cone and is located in front of Wrangler Rock. It's also the closest formation to the parking area.

No permits are required for climbing on Dune. 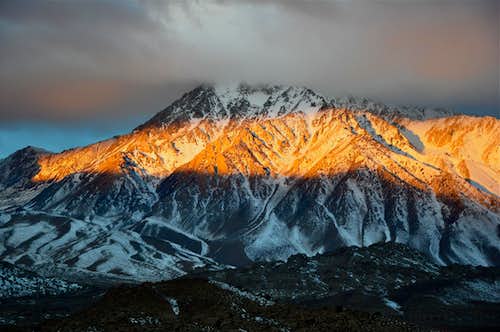 Mount Tom, another beautiful mountain view from The Buttermilks

camping in bad style
With a huge flux of climbers from out of town, I have noticed many tents and unsightly campsites in the parking areas. This practice has been tolerated by locals and authorities, so far. These climbers use the surounding areas, and sometimes the base of boulder problems, for going to the bathroom. I am afraid this kind of abuse will eventually impact this beautiful area. In addition it may result in restriction on access.
There are many campgrounds nearby that can be used. Do your best to use the campgrounds, at least for extended stays. In addition to the nearby campgrounds, there are many unofficial campsites, some near running creeks, that can be used. In any event, camping in the parking areas is the worst to choose.

Crags of The Buttermilks AreaMountains & Rocks