"Point 9883" or "The Shard", which is it? Well, officially Point 9883, since that's how it's shown on most maps. But to local climbers it's The Shard. And with good reason. Just looking at its jagged ridge crest from a distance gives one the feeling it may be unclimbable, at least without gear and lots of experience. I have no idea who first called Point 9883 The Shard, but for those in the climbing community, the name stuck. 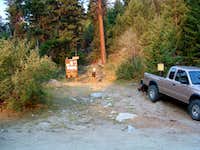 Drive south on Hwy 93 from Darby, MT for about 4.5 miles. Turn right (south) onto the West Fork Road (473). Go only about 100 yards, then turn right (southwest) onto Tin Cup-Chaffin Road (not signed – first road to the right).

Continue for about 2.8 miles to an unmarked junction and stay to the right (continuing westward). Drive a little over a mile to the trailhead which is located at a right-turning switchback. The trailhead will be on your left (west).

There is limited parking space, though people sometimes just park along the road.

There are no restroom facilities. 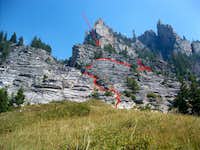 Lower portion of routeup the gully.

Anyway you look at it, it's a long way from a trailhead to The Shard. For instance, either of the two routes to The Shard from the Chaffin Trailhead are about 7.7 miles long. And, because both routes require you to gain over a mile in elevation, I think it makes sense to break either route into two portions, the approach and the ascent. If you have the stamina to combine them, well, go for it. Otherwise, I suggest establishing a base camp at the end of the approach and a getting a night's rest before tackling the ascent.

Although I have not yet gotten close enough to The Shard (using either route) to study the level of climbing skill required to reach its summit, from a distance it certainly looks like a substantial amount of time will be spent route finding during the final portion of an ascent using either route. In my opinion, that is best done when well rested, not immediately after a long approach hike. 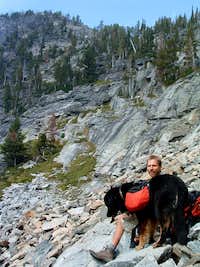 From the Chaffin Creek Trailhead head west through stately ponderosa pine and douglas fir along a well used trail. The recently maintained trail stays just north of Chaffin Creek as it makes its way westward along the bottom of the drainage. For the Bitterroot Mountain area this trail is gentle, as it gains just over 1,800' of elevation in the first 4+ miles. Then the fun begins!

At about 4.3 miles you will have finished a series of switchbacks up the north side of the drainage and reached an elevation of approximately 6,650'. You will be on a grass-covered moraine just south of and below the largest gully up the north side of the canyon (45.9557 N – 114.2993 W). From this point the "official" Chaffin Creek Trail proceeds downhill for a short distance as it approaches a crossing of Chaffin Creek; however, you will no longer be following that trail. Rather, you will begin climbing uphill, directly toward the bottom of the gully. 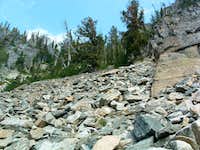 Approaching thetop of the gully.

As you climb uphill toward the gully, head toward the rounded crest of the moraine where there is a strip of talus which has been kept exposed by the rushing waters of spring runoff. By following the talus upward until you arrive at the bottom of the gully, you will be presented with a perfect place to begin your ascent.

Make your way up along cracks, slabs, and rock steps for several tens of yards, until you reach a spot at which, if you were to continue on your path forward would require you to be able to navigate a 10'+ step almost straight up. I decided to take an easier route slightly to my right (east) and away from the obvious bottom of the channel. (Better and more experience climbers would probably be able to continue up the bottom of the channel.)

Having bypassed the step, I found myself at the bottom of a two foot-wide crack leading up but still away from the channel I had been following. Full of easy handholds, I followed it up onto a several-feet-wide ledge on a small cliff band going to my right (east). 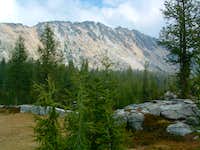 I walked eastward along the ledge until I reached an obvious dead end. Fortunately, at this point there was an easy way to ascend up to my left (northwest).

Continuing to climb in a northwesterly direction through a bit of shrubbery and few trees brings you to a field of talus at the bottom of a high cliff face. Hike over the talus toward the left (west) edge of the cliff bottom.

For a better idea of the portion of the ascent route to this point, study the picture above.

When you reach the western edge of the cliff bottom and peer around the corner, you will find that the bottom edge of the cliff curves upward to the right (north). Initially a good line is to stay as close as you can to the base of the cliff as you bushwhack upward through brush and trees. I'm not sure there is a "best route" through this area, so just have at it. 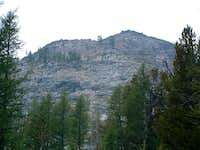 At some point, your uphill struggles will take you to a place where the talus down the center portion of the gully is no longer interspersed with bothersome plant growth. It is at this point that I suggest you move out onto the talus and finish your gully climb on rock; otherwise you're going to be fighting brush and small trees all the way to the top.

When you reach the top of the gully, the elevation will be about 8,550'. That's 1,900' above the place where you began climbing from the grassy moraine. And, you've covered only a half mile of ground since then. Now you know why you had difficulty breathing during the ascent and why your thighs were burning. 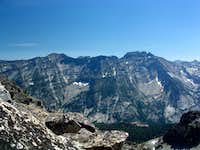 The north side of The Shard.

From the top of the gully, you will see the top portion of a beautiful cirque, an open forest of larch and whitebark pine with a carpet of grass. You have reached the headwaters of the Little Tin Cup Drainage and are witnessing a vista few have seen. Not only have I not spoken to anyone who has ever been there, no one I talked to has even heard of anyone who has. Welcome to real solitude!

In my opinion this high cirque is a perfect place to set up a base camp for a multi-day assault on the nearby 9,000'+ peaks, particularly The Shard. There is a year-round stream, a small lake, and the day I visited, almost no insects (that day's wind may have contributed to the lack of bugs). The idyllic setting is inhabited by Hoary Marmots, squirrels, and chipmunks. Plus we saw signs of deer and goats having visited in the recent past. The only drawback to using this place as a base camp is having to carry extra weight up the gully.

This climbers' route begins from the Little Tin Cup Cirque and generally follows a ridge crest in a westerly direction to The Shard. The distance is a little over 2 miles with a substantial amount of elevation gain and loss along the way (1,955' and 694' respectively – on the ascent).

Begin by climbing from the cirque to Point 9617, referred to by some as Little Tin Cup Peak. There are several cliff bands on the east face (where you will be climbing) and it appears the best route to the summit is close to the ridge crest of the southern edge of the face. [There is a 9,000' hump along the southern ridge crest of this face, stay to the right (north) of it during your ascent.]

Once you reach the top, down-climb the west ridge of Point 9617, staying as close as possible to the crest. You will reach a saddle with an elevation of just over 9,200'. From the saddle continue west-southwest and climb over a small point, elevation near 9,400'.After down-climbing the west side of this small point, you will see The Shard to the southwest just across a south-facing bowl. As you make your way across the bowl toward the saddle on the other side, do your best to keep your elevation constant (near 8,250'). 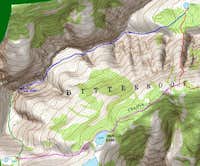 Once the saddle is attained, the portion of the climb which lays ahead of you is unknown. The ridge crest to The Shard from your position in the saddle goes south-southwest before turning southwest about 150' below the summit. As I have been unable to find anyone who has been on or near this summit and was forced by weather to turn around during my last attempt, you are on your own from this point on. Again, if you reach the summit before I do, I will gladly transfer partial SP ownership of this mountain to you. Good Luck!

At the very least, sturdy shoes or boots are strongly suggested. The climbers' routes require plenty of rock climbing and boulder hopping, so make sure your footwear is sturdy.

From the trailhead, it takes a fairly long time to reach either the Little Tin Cup Cirque or the bowl of the Chaffin High Lakes. Be sure to carry plenty to eat – you're going to need the fuel.

Currently there is no way to tell if the final approach to the summit requires "technical gear." If you're skilled in the use of such things and are willing to bear the weight, go for it.