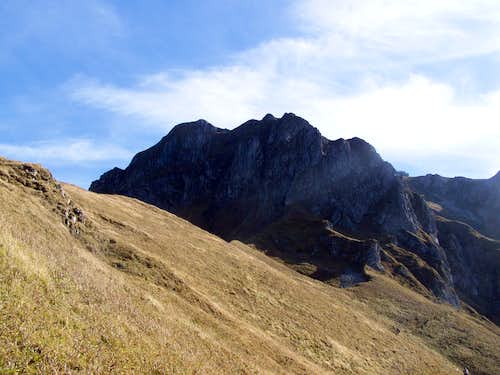 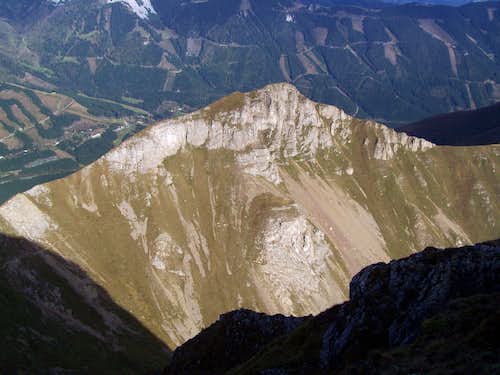 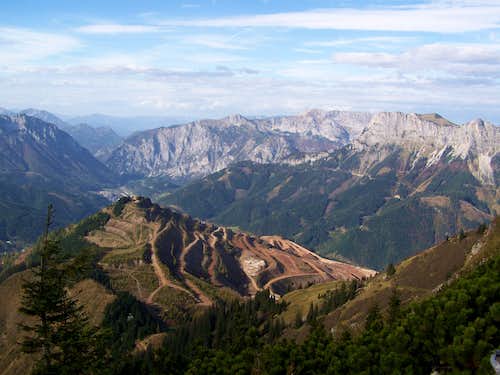 Erzberg mining area
Eisenerzer Reichenstein is a spectacular and very popular mountain in Styria. The prefix ‘Eisenerzer’ is important, because there are other peaks in the Alps with the name ‘Reichenstein’.

The highest peak of Eisenerz Alps is Gößeck. Eisenerzer Reichenstein is a bit lower – but better known.

Why is Eisenerzer Reichenstein so well known and so popular? There can be many answers:
• Easy to get there: the trailhead of the normal route starts at a large and free parking place, and this parking place is only 1 km far from the saddle of Präbichl. The parking place is managed by the small hotel called Präbichler Gasthof
• Various activities: hiking, trekking, via ferrata, skiing
• Spectacular views on the rocky peaks of Eisenerz Alps as well as on the neighbouring ranges
• This mountain also offers the opportunity to visit a huge mine without entering its area

Eisenerzer Reichenstein is a rocky mountain with sharp ridges and with several sub-peaks. The highest peak is the north-east peak. Its height is 2165 meter. This peak is the cumulation of three ridges. The longest ridge stretches to western direction. Named peaks of this ridge are Hieflerkogel, Hocheller and Hohe Lins (2028 m). This long ridge is suitable for ridge trekking

Another ridge is the south-eastern ridge with the peaks Grüblzinken (1990 m) and Vordernberger Zinken (2004 m). The excellent route ‘Grete Klinger Steig’ is along this sharp ridge, including via ferrata sections. There is a deep valley between the western and south-eastern ridge, and you can find a small lake – Krumpensee – and a waterfall here.

The third shorter ridge is to the north, with the sub-peak (1855 m). A part of the Normal Route (Theklasteig) is partially on this ridge. This ridge is adjacent to the Erzberg mining area. This is an open-pit mine, with the largest iron-ore reserve of Austria: 235 million tonnes of ore. Earliest records of mining activity here is from the 11th century. Recently the yearly production is 2.2 million tons. ‘Erzberg’ means Ore Hill. The whole surface of the hill is covered by the mine. 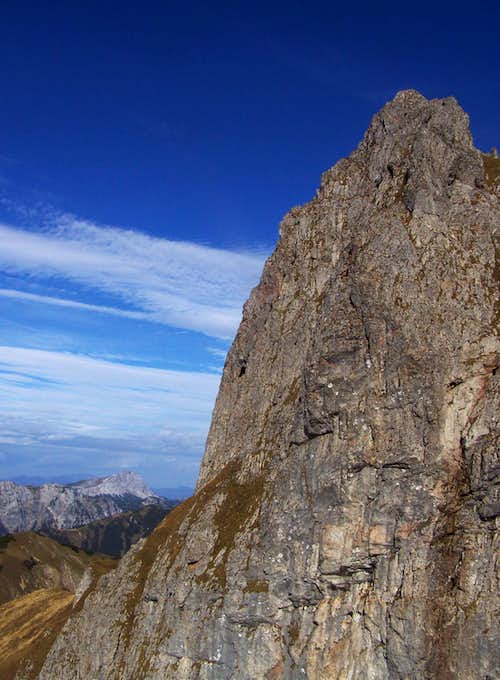 This cliff is just above the "Ladder" 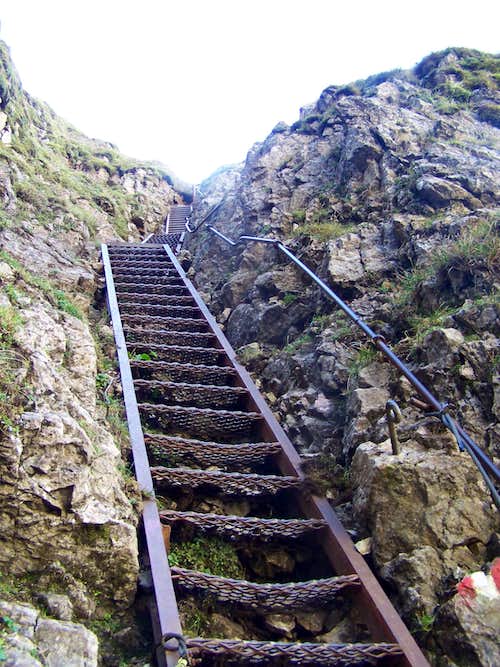 There are a few recommended ski touring routes on Reichenstein. I mention only the route that starts from Reichhals (near Hieflerkogel) and descends to Krumpensee 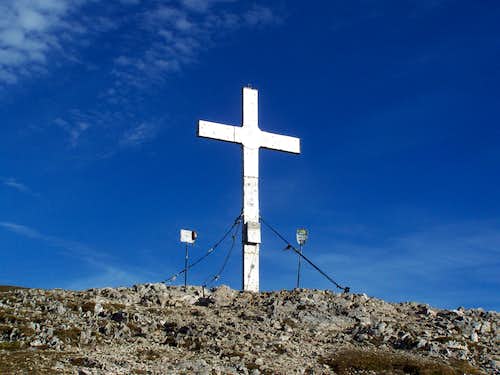 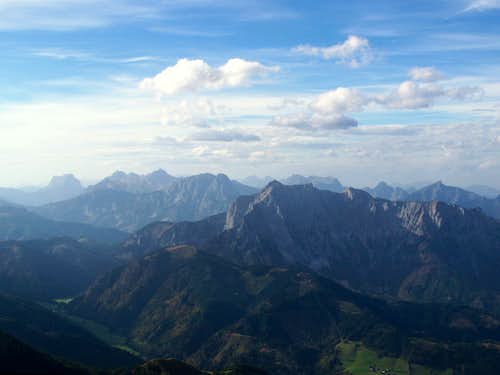 Peaks of Ennstal Alps
The northern, eastern and south-eastern sides of the peak are almost vertical rock walls. Of course without vegetation. Like the whole Eisenerz Alps, also its highest peak is made from Devonian limestone, consequently it is nearly white, especially in sunshine. The south-western slope is not so steep – the marked trail to the peak is here.

A big cross is erected on the summit – similarly to most of the peaks of Austria. There is a smaller flat aera around the cross, so many hikers can stay here in safety and can enjoy the excellent view. The most exposed neighbouring peaks are the following: 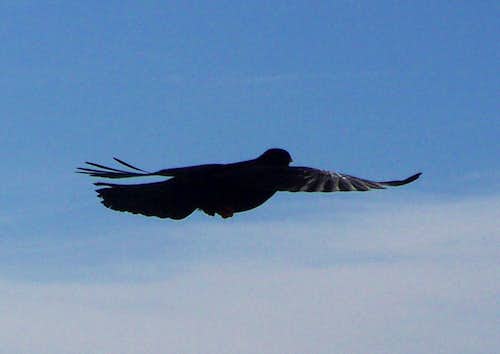 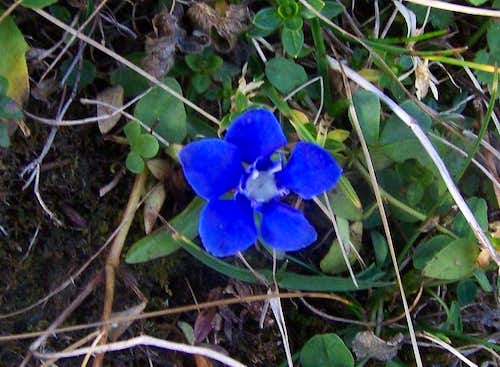 Gentiana verna
Almost the whole area of Eisenerzer Reichenstein is a Natura 2000 nature potection area. Please respect it and keep nature in a condition as it was before your visit 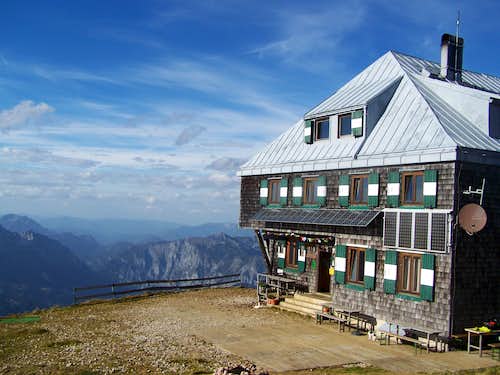 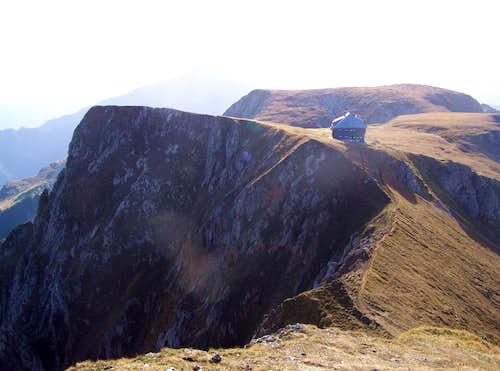 It is a historical mountain hut: the first building was erected here in 1898
Website: www.alpenverein.at/huetten/?huette_nr=0184 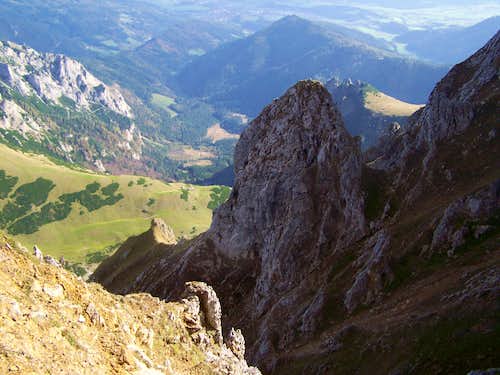