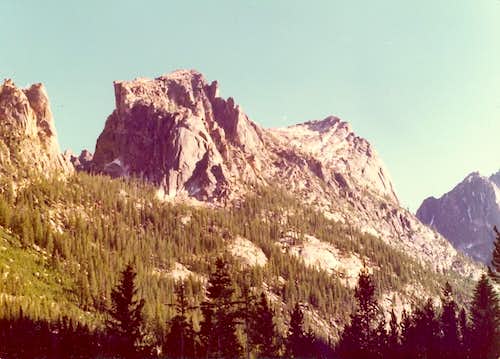 Saddleback Peak/Elephants Perch from the Redfish Lake Creek trail.
I first visited the west side of Elephants Perch (Aka Saddleback Peak or Sawtooth Dome) in the mid-70s on an aborted attempt to climb a big aid route on the west face. It had been a couple of years since I first met my rock climbing instructor, Frank Florence and I had racked up a couple of seasons of year-round technical rock climbing so when Frank proposed that we go to the "Perch" and give it a shot, I was all go. Back then, the only way to get beta in Idaho was by word of mouth and we had heard stories from Bob Rosso and others in the Ketchum area about some awesome routes that were being put up on Idaho's biggest granite wall so off we went. We brought what we thought was a decent rack including bugs, thin blades. lots of small wired pieces and the standard of the day, a full rack of Chouinard hexes and stoppers. We also brought two 50m ropes, jumars, aiders and maybe 35-40 biners thinking we were equipped for anything. Not having room for a tent, we spent a long, muggy Idaho summer night under a tarp swatting mosquitoes until it was light enough to climb. We scrambled from our miserable biv site to the ledges at the bottom of the west face and Frank picked out a thin aid line in a shallow corner that went on for maybe 300' before the first ledge appeared. We set anchors and Frank took off up the crack in aiders. It wasn't long before Frank realized that he didn't have enough gear so he down climbed a ways and started back-cleaning his lower pieces. It must have taken 3 hours to finish the first pitch and it took every bit of rope and gear we had. After fiddling around for almost a half-an-hour trying to set a solid belay anchor with stacked knifeblades, Frank called down that he didn't think we had enough gear to do this route, that I should come up, clean the pitch and we'd rap off. After sitting in one place staring straight up for hours, I agreed, so I quickly rigged up my jumars and started up the dead vertical pitch, pulling pieces as I ascended. At about the halfway point the crack bottomed out and the pieces were coming out with a single tug, including the pitons. When I made it to just under Frank's feet he mentioned that his anchors were starting to bend under our combined weight. We had a little chat and instead of rappelling I was just going to gingerly retreat the way I had come, on my jumars. It seemed like it took another half-hour to sneak down that rope and when I hit the ledge I knew that one of us was going to get off this slab alive. After spending another half hour rigging more gear for anchors, Frank rapped off and we made it safely off this wall. Later, we found out the pitch was rated A4 so we didn't feel too bad. We snagged a consolation prize the next day when we did a fun 3 pitch 5.6 on one of the towers in the area while watching the Eye of the Elephant get put up by a Ketchum crew.
Since that first trip in the 70s I have made numerous trips back to this area, including several on skis in the middle of winter and the most recent in late October 2012. I may not ever climb this face again but I will always be able to walk by and get a big smile on my face knowing that I did.