Elkhorn Mountain is a dramatic summit rising out of the Elk River Valley in the northern sector of Strathcona Provincial Park, Vancouver Island, British Columbia.

The mountain is of considerable historic significance to Island climbers. Shortly after the inception of Strathcona Provincial Park in 1911, an Alpine Club of Canada (ACC) expedition led by its first president A. O. Wheeler chose the “Strathcona Matterhorn" as it was then known as the objective of the clubs first trip to the fledgling park. Their 1912 first ascent by the NW Ridge, shown above, is still the classic route on the peak, and was hugely instrumental in consolidating the status of the park as a wilderness area of sublime beauty that should be protected for future generations in perpetuity. It was not until September 1949 that Elkhorn received its second ascent.

In the early days of the ACC the status of Senior Member was awarded to those members who had scaled any three summits over 11,000 feet. Unfortunately for Vancouver Island members, there is nothing here much over 7,000 feet. For this reason a special criterion was set up for Island members; a list of nine summits of sufficient difficulty as to ensure that any mountaineer who scaled any three had attained a degree of climbing expertise deserving of Senior Membership. These nine summits became known as the “Island Qualifiers” and, although Senior Member status has long since become redundant, Island climbers still aspire to "do their IQ’s”. Elkhorn is one the nine qualifiers. At 2,166 m it is also the second highest peak on the Island after The Golden Hinde. An ascent of Elkhorn is a committing 2-3 day trip involving steep bush, snow and ice, depending on route and season, and technical, sometimes loose, rock. For all these reasons and many others, Elkhorn is a prized asset on any Island climbers CV.

Vancouver Island can be reached by air from Vancouver to Victoria, Nanaimo or Campbell River and by ferry from Port Angeles to Victoria on The Coho and on BC Ferries from Vancouver to Victoria or Nanaimo. Public transport on the Island is relatively poor and anyone arriving by air would be advised to rent a car. Access in this case is all on paved roads and, therefore, fine with a normal sedan. From Campbell River, at the end of the Island Highway 19, take highway 28 west towards Gold River. After approximately 30 km the road meets Upper Campbell Lake with the first views over the mountains and after 47 km you will enter Strathcona Park at Elk Portal. Stop and admire the large wooden elk statue. Exactly 1km further on highway 28 makes a right turn over the bridge at Buttle Narrows. Take this turn in the direction of Gold River. Drive approximately 20 km passing the Kings Peak (left) and Crest Mountain (right) trailheads before arriving at the Elk River Trail (ERT). You will be camping outside the Strathcona Park core area so that are no formalities to complete. Gear up and head off south down the ERT. 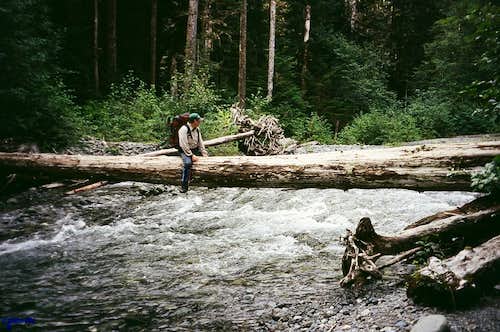 Crossing the Elk River
Enjoy the first 45-50 mins or so on the more or less level and engineered trail. At the point where you can see the steep gorge of Elkhorn Creek rising to your left, it is time to leave the ERT and begin to earn your mountain. Cross the Elk River as best you can. At the time of writing there is a log crossing in place. Thereafter, pick up a flagged route that rises at an unrelentingly steep angle for the next four hours if you are carrying a full pack. Although booted-in in many places, the trail does sometimes disappear into blow-downs or climbs gullies and draws on no discernable path. The 5th Class tree root pitch is an Island classic. On the positive side, flagging is almost always visible and, although you may not see how you have to go, at least you can see where you have to go.
Shortly after climbing a steep gully, usually wet, and about 4 hours from the river crossing, you will arrive at a level forested col on the northwest ridge of Elkhorn. There is a possible campsite here – see the Camping section below. From the far (west) side of the forested col pick up more flagging which takes you south east and finally out of the trees on to the open north west ridge. Approximately an hour up from the col you will find an obvious camping area with tarns for water and spectacular views all around.

You are now outside the core area of Strathcona in which you started and there are no fees to pay. BC Parks does not operate an intentions system, so there is no book to fill in. Make sure, therefore, that you have left a detailed trip plan with someone responsible. Parks and the appropriate SAR agency will respond in an emergency but it is up to you to have the mechanism in place that will initiate the process if it becomes necesary.

Natural kitchen
As indicated above, there are two options for camping at the end of the first day.

About 200m above and to the right (north) of the forested col is a rocky knoll with a seasonal tarn. If water is available I highly recommend this option. It saves an extra hour up and down with a full pack, offers excellent views of the upper NW ridge of Elkhorn (but not the summit), north across the Elk River Valley to Puzzle Mountain and Volcano Peak and south to Kings Peak and even comes equipped with an ideally placed rock bench for a ready-made split level kitchen. Bear and cougar sign is often in evidence here, so proper back country methods – hanging food bags out of reach, cleaning up all cooking scraps, good toilet practise etc – is essential.

The upper camping area on the open ridge offers even more impressive views as well as the almost 100% guarantee of water.

In both places, as is the norm in Strathcona, giardia is well documented, so boil or treat all water. Pack a small stove for cooking and don’t light campfires. 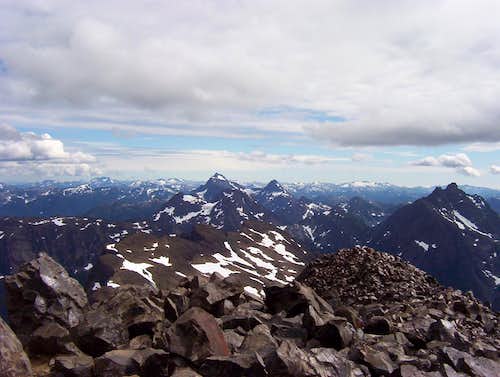 Altitude was revised to that given about 4 years ago. IA while good is not infallible.

hmm, I see. That puts it almost on-par with Victoria peak. The lower actual altitude doesn't make it any less intense though.

Agreed, especially that never-ending, knee-bending flog up from the Elk River to the alpine.

Hi everyone, I am an experienced hiker and I have just looked up Elkhorn and was wondering if anyone can tell me if I will definatly need climbing gear or can it just be hiked if the time of the year is right?

Re: Thinking of hiking elkhorn

Elkhorn via the gullies route is certainly soloed on a regular basis when snow free. However, I for one, would not like to attempt it without a rope particularly on the descent.

I had a chance to lead four friends up to the summit of this mountain. It was a great trip but I made some basic leadership errors. I wrote a trip report on my blog. Here it is: http://explorington.com/2016/08/elkhorn-south-mountain-hiking/