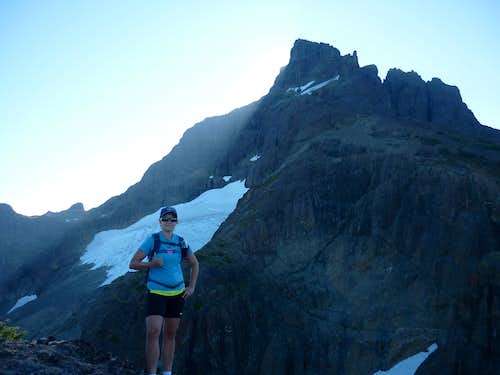 So I am sure I don't need to explain why I have been wanting to conquer Elkhorn Mountain for quite some time. Being the second highest peak on the island at 2195m makes it an impressive peak to have under anyone's belt. The weather this September (and the rest of the summer for that matter) has been phenomenal. Clear skies and warm temperatures. Most of the mountains in the Strathcona have minimal if any snow, making for prime hiking conditions. Therefore, this past weekend my girlfriend Darryl, cousin Devon, and I decided we would climb Elkhorn.

To get to Elkhorn Mountain we drove from Victoria to Campbell River after I got off work on Friday evening and stayed at my girlfriend's parent's house. The next morning we took highway 28 towards Gold River until we reached the Elk River Trail parking lot, which is well marked.

We parked the truck and set out on the Elk River trail at 1000 Saturday morning. I turned on my GPS so that I could see when we were 2.5kms into the trail. I have done the Elk River trail a few times before and it is a nice easy warm up before hiking off into the bush. We saw a few people on the trail headed to Landslide Lake.
At 2.5kms exactly there is a nice sign that says "Elkhorn" and here we headed east across the river. The water level was so low that we did not need to find a big log crossing or take off our boots. Instead, we found a good couple of rocks to hop on, a small log, and used our hiking poles to balance across the river. From the other side we picked up a flagging trail and began pushing through the forest. At first the bush was a bit more dense and so we were relying heavily on looking for flagging, but after about five minutes a slightly booted path became apparent, which made the route easier to follow.
The route started off flat, but it was a tease. After only a few minutes we were headed up through steep forest. It was pretty unrelenting... I was thankful that it was shady because it was quite the grunt. We kept a slow steady pace only stopping for a couple minutes here and there so that I could re-apply duct tape to my heels so that I would not blister. The route here climbs up the south side of a treed canyon with a stream down below. I was thankful for my GPS so I could track our elevation gain since the trees make it hard to track progress. Here we saw two other guys heading up ahead of us.
The route flattened for a very short period before again heading up more steeply now tighter along an edge from which we could see the rocky creek bed down below. This required holding on to roots and trees to climb up. Not long after this point we reached a wet, slippery rock bluff that people had left a few old ropes to assist in climbing without falling. Here a man and his son caught up to us for a couple minutes and we exchanged a few jokes. The old guy asked us if we knew "when the trail got steeper?" I gave a sad laugh.
Again we slowly trudged on until we could see blue sky through the trees, finally! We sat and had a quick snack and bathroom break. Here I drank the last bit of my 2L of water and the sun beat down on us through the trees for the first time. When we got hiking again the flagged route took us out along the west side of the ridge we were climbing up. I started to get a bit nervous about finding water since everything seemed bone dry and the thought of snow seemed unimaginable.
At 1500 we finally broke out of the forest into the alpine. Not long after we could see the tip of Elkhorn dead ahead and its glacier melting in the north bowl down below. Here we found a couple smaller pools of water on a shelf below the trail and decided to set up camp. We dropped our bags finally at 1530. The other two groups we ran into did the same. From our tent we had Kings Peak and the ridge to Elkhorn directly in front of our door. To the south we had Elkhorn's summit looming above us. To our backs, on the other side of the ridge, were phenomenal views of Colonel Foster and Puzzle Mountain. Far to the north/west I could see Victoria Peak climbing above its neighbouring mountains. Needless to say this was the most amazing place I have ever camped. The evening was windless and warm and we sipped vodka and gin before retiring into the tent for the night. 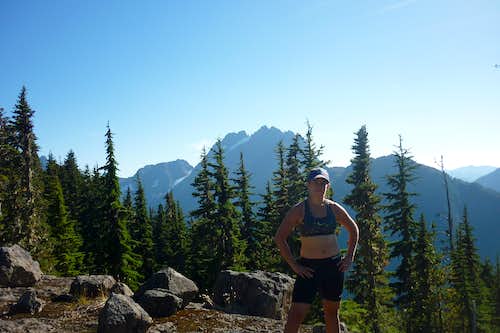 Colonel Foster behind our camp 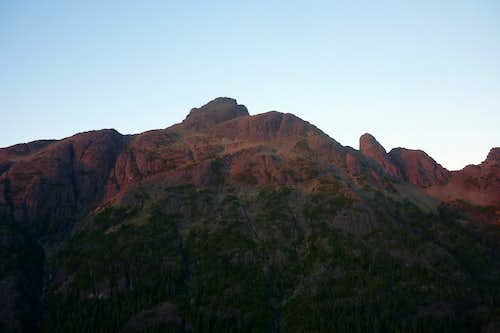 Kings Peak in front of our camp 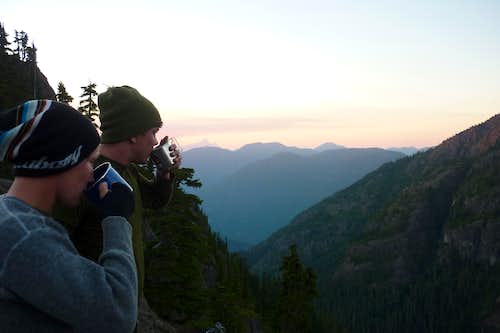 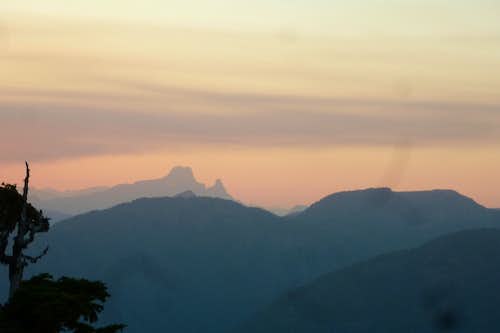 Victoria Peak off in the distance 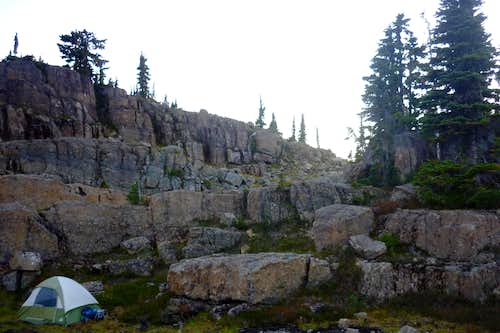 Our camp for the night 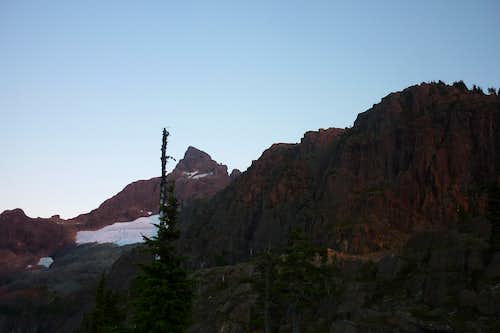 Elkhorn summit from our camp

The next day I set our alarm for 0700. All of us climbed out of our tent to find it warm and dry. We packed day packs, cached excess food, cleaned up our camp, and hit the trail by 0845. It felt good to have a nice light pack on for a change and I felt very spry. Here the route follows cairnes and flagging nicely up and down over a few humps on the ridge until one arrives directly below the summit in the West Basin.
I had looked into the various routes and from what I had read most people hadn't used much for ropes on the easiest route, which was rated "low 5th class." Because of my lack of climbing experience I decided that ropes were not necessary, thus, we came very ill prepared. I didn't follow my first rule of hiking, which is to always over prepare...
We started first with the West Couloir approach, which looked straight forward, and I read it was the easiest. Getting over to it was quite scrambly and we triggered a number of small rock slides trying to move quickly to the rock gully. Once we arrived the climbing was not overly difficult. However, not having ropes for security and helmets for protection from the many falling rocks made it a bit too exciting for my liking and I did not want to do anything stupid. I started to get concerned about having to scramble back down... Therefore, I voiced my concerns with the rest of the group and we decided to turn around. According to my GPS we were only 55m from the top... This was the closest we would make it to the summit. We turned around and headed back down to explore other routes.
Next we went around to the South Ridge, which proved very difficult. Because of the conditions, the West Basin was filled with loose rock and ice rather than snow, which made crossing very difficult. In fact, there was no stable ground to stand on all the way across. By the time we made it to the south side of the mountain we all felt a bit uneasy and instead of trying to head up, we had a snack and a rest before turning back. Even though I felt disappointed the views here were mind blowing. We had the best view of Colonel Foster and Rambler Peak. 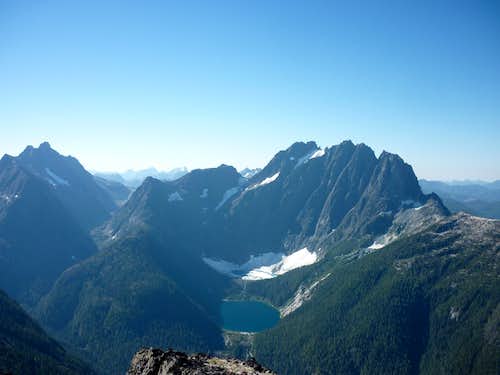 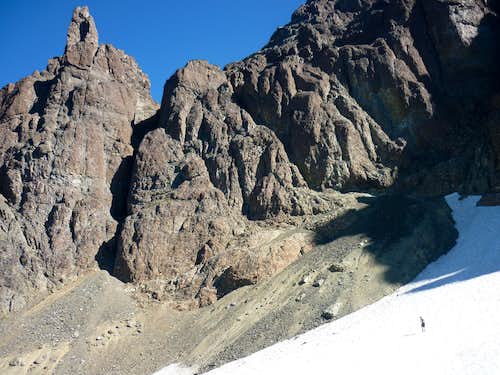 Devon walking across the hard ice of the West Basin
Finally, as we made our way back across the West Basin and were about to leave, we decided to give it one last try and head up the North West Ridge. We started with zest and got up quite a ways. However, I started to see more and more climbing gear left from previous climbers and got that sinking scared feeling again about climbing back down without the proper safety equipment. The loose rock was nerve racking without a ropes and helmets. I looked at my GPS and we were still 250m from the summit, since this route headed up farther out from the summit then the West Couloir. Again, I voiced my concern and we all agreed that it was not a good idea to press on. We flew our white flags and headed down to pack up camp.
By the time we joined up with the trail to descend to our camp it was about 1245. The other two groups we had run into joined up with us stating that they had made it up the West Coulior to the summit. As I thought, they did not feel they needed there ropes so much on the way up since the climbing was not overly technical, but mainly to repel with safety on the way down. One of the guys said he did what we did a few years previous and did not bring ropes and was back for a successful re-attempt. That made me feel a bit better about our situation.
Once we got back to our camp we had a quick lunch and packed up our gear. We did bring enough food and supplies to camp another night, but feeling slightly defeated we wanted to make it back out to the truck. We left camp and started our final descent at 1430. It felt good to slowly leave the direct exposed sun to the cool shade of the forest. During our travels we did knock a few rocks loose. In fact, one of the guys from another party coming down behind us sent a rock plummeting that hit Devon square in the back of the head! Ouch...
We had a steady pace on the way down and only stopped once for a quick break and some food. We made it back to the truck by 1820 and decided to drive back to Campbell River for the night before returning to Victoria. In the end I am obviously disappointed that I cannot say that I have summited Elkhorn and feel foolish for not being more prepared. However, hiking in the Strathcona is never a letdown and our camping spot was one of the most breathtaking I have ever had. Also, it felt good to overcome a gruelling majority of trail. As well, I have learned a great lesson to play it safe because no mountain is worth risking a life. Also I was able to recognize when I hit the boundary of my limits as a prepared hiker versus a prepared climber. I plan on going back again in a couple years and bagging this mountain for real!