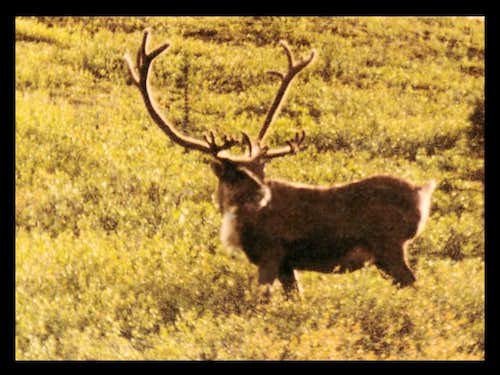 Telephoto View of an Alaskan Caribou

Ester Dome is the mountain that dominates the skyline just to the west of Fairbanks, Alaska. It is a popular recreation area for locals. The summit area was the site for a ski area, Ullrhaven, in the 50's and 60's, and more recently, an observatory. The mountain is managed by the Alaska Department of Natural Resources office in Fairbanks. At 2,364 feet, and at over 1,700 feet above the Tanana River Valley nearby, Ester Dome offers outstanding views of the White Mountains to the north, the Alaska Range and the Tanana River valley to the south, and on very clear days - Mount McKinley, over 200 miles to the southeast.

Located in the 1.8 million acre Tanana Valley State Forest, Ester Dome played a part in the gold rush that began as placer mining at Ester Creek in 1903. Gold ore was mined from narrow veins along anticlinal folds at Ester Dome. The only proven reserves there now are those at the Ryan Lode. The richest deposits have been associated with the crystalline quartz veins formed within the faults.

The climate in the area is legendary for severely cold winters, with temperatures often in the -40 to -65 degree range in December, January, and February. Summer temperatures can occasionally rise to the 80's and even some very rare 90's, though the mean temperature for the summer months is 57 degrees. Annual rainfall runs about 12 inches, which puts it in the semi-arid category, while the average annual snowfall is around 50 inches. Just as incredible as the extreme cold winter temperatures, is the range of daylight from summer to winter. Summer days can have over 21 hours of direct sunlight, while winter days can have less than four hours of sunlight. The northern lights at these latitudes are spectacular! 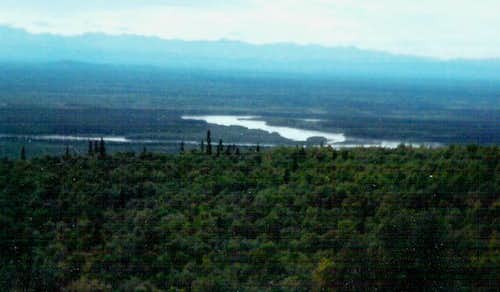 Ester Dome is covered with relatively young unconsolidated wind-borne sediments, but is underlain by a variety of rocks, named Muskox Sequence, Birch Hill Sequence, Fairbanks Schist, and the Cretaceous intrusives. The Fairbanks Schist may be Precambrian in age. Ester Dome was cut by many steep, high angle faults. These are seismically active faults and related to a network of northeast-trending faults between the Tintina and Denali fault zones.

Thick forests cover the area, and are composed of black spruce, quaking aspen, paper birch, white spruce, balsam poplar, and tamarack. Amid the trees are thickets of willow, alder, dwarf birch, and berry bushes. Grass and moss grow on the slopes and mossy tundra can be found on the ridges. Timber production is a major commercial activity in the area. Permafrost in the area affects plant growth. Where moss is absent, permafrost thaws several feet in the summer, but only a few inches where the moss grows.

While the summit is on public lands, please remember there are many communications towers there. Please do not disturb them. Depending on the route to the summit you wish to take, make sure you pay heed to any posted signs you may encounter. 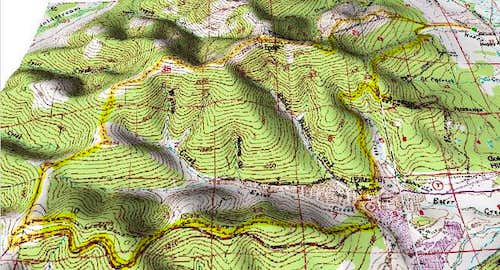 The surest way to the summit, is the Ester Dome Road. From Fairbanks, take Sheep Creek Road about 3 miles west. If you hike from the junction with Ester Dome Road, it's about a 4-mile trek to the summit. Or you could drive part-way up, park, and hike the rest of the way. There is some traffic there, due to the radio and TV towers, and other interests. But, the traffic is not bad most of the time. 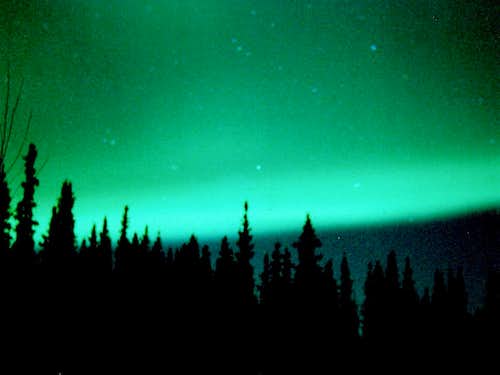 If you do not want to do an out-and-back, you can make a loop by taking the Alder Chute Trail near the old Ullrhaven ski lodge near the summit. As you descend, you will eventually be on Henderson Road. This will bring you to a left turn onto St. Patrick Road, which will make a loop back to Ester Dome Road to about a half-mile from the junction with Sheep Creek Road.

There are a number of other trails on Ester Dome, not all well-marked. During the summer of 2009, many area mountain bikers joined forces with civic groups in the area, along with the Fairbanks Hiking Club, to begin work on the Ester Dome Trail - a three part loop system primarily for mountain bikers, but also for hikers and winter snowshoers and skiers. There is a West Ridge Trail that runs from the village of Ester to the summit, but accurate maps for this trail are hard to find. There are a number of spur trails along this trail, some ending at the Old Nenana Highway. If you choose to try out any but the main routes (road) up Ester Dome, please make sure you have reliable maps and information. 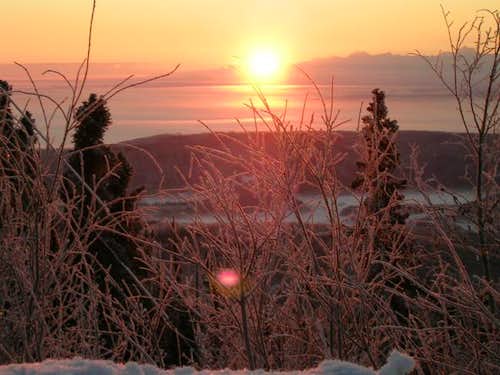 Sunrise Over The Alaska Range, photo courtesy of Fortaz107

Cabins and campsites are available at many of the nearby state parks. The state of Alaska maintains a website with current information on campground facilities, regulations, prices, availability, and contact information. You can access this at:

The Fairbanks Chamber of Commerce has a website with up-to-date information on lodging, camping, dining, and more. You can access that at:


For hiking other trails and areas in Alaska, check out the Alaska State Trails Program website. 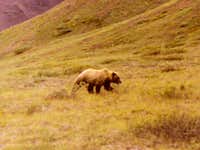 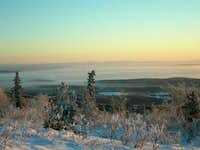 Mid-winter hiking is not advisable, due to the very cold temperatures and very limited daylight (about 4 hours in December). At -60 degrees, one can take a cup of boiling water and throw it into the air, only to have all the drops fall frozen by the time they hit the ground! For the latest Fairbanks area weather forecast and conditions, click on this link:

Mosquitoes can be overwhelming at times during the summer, especially near dawn or dusk. There are bears and wolves in the region, though they are not regularly seen on Ester Dome. Be sure you know the route you have mapped out. It is not far to the deep wilderness where there are few if any roads.