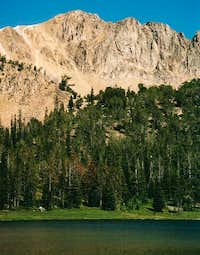 Fourth of July Lake
Almost without exception, my most rewarding mountain experiences have been unplanned. Spontaneity seems to bring with it the thrill of discovery--- you do not know what you will see and are not knowingly following any detailed route, and the views from each crested ridge or summit encompass “new” worlds for which no photographs or descriptions have steeled you.

So it was with my brief, glorious (but sad, too) day in Idaho’s White Cloud Peaks, where I scrambled to the summit of Fourth of July Peak, the unofficial name for UN 10,713. Ask a non-Idahoan to name a range in Idaho, and you’ll probably hear first and maybe only about the Sawtooths. Yes, the Sawtooths are deservedly popular, and the bold rise of their eastern face reminds me much of the eastern face of the Sierra Nevada, but across from the Sawtooths, across the trickling beginnings of the great Salmon River, is another, higher, equally dramatic range: the White Clouds.

The White Clouds do not offer the technical climbing that the Sawtooths do, but they are stunningly colored, rugged and wild, and virtually unknown relative to their famous neighbors, which I imagine is just fine with those who know and love these peaks. One reason they are so unknown outside the state is that the White Clouds are very hard to see at all from roads; that, though, is one of the range’s myriad virtues.

Although I love the Rockies above all other mountains and know the ranges of Colorado, Montana, and Wyoming quite well, I am sad to say that I know Idaho’s mountains very little. In fact, I have only been into the Sawtooths and the White Clouds, though I have seen many of the state’s other ranges. So my saying that the White Clouds are Idaho’s most beautiful mountains may lack the experience to justify it, but I say it all the same. 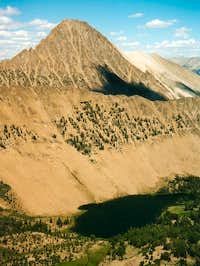 Castle Peak and Washington Lake from the summit

On the way up
During the course of our July 2002 trip, my wife and I spent three nights in Salmon and then three at Redfish Lake Lodge in the Sawtooths. It takes only two or three hours to drive from Salmon to Redfish Lake, so we needed something to do before check-in time. Since I do not fish or get much into “cultural” attractions, a hike was in order. We chose the hike to Fourth of July Lake, described in an issue of Backpacker magazine I had at the time, because it was supposed to be short and scenic and went into some mountains we hadn’t seen before.

Yup, just killing time in the White Clouds. Perfect place for it, as it turned out.

The lake was pretty, prettier than I expected it to be, in fact, considering its elevation and the surrounding forest cover shown on topo maps. But it was a beautiful afternoon, too beautiful to spend moving our belongings into some cabin, and I found myself wanting more.

My wife does not like to climb; even the exposure on walk-ups tends to unnerve her. Thus, she was content to stay at the lake and enjoy the warm sunshine while I went scrambling up a nearby ridge to see what there was to see. I often feel confined at lakes and have a desperate urge to see what lies beyond the peaks above them and in all other directions.

I followed the northeast ridge. If my scramble to the summit were one long sentence, numerous commas would mark all the pauses I made to appreciate the scenery. I just could not believe how beautiful the high White Clouds were, and I kept wondering at the combination of the fine weather that allowed me the chance to ascend and the curiosity that gave me the motivation to do so. The summit afforded a 360-degree panorama of much of the finest the White Clouds have to offer, and believe me--- these mountains have a lot of fine things to offer. Southwest and east lay beautiful lake basins. Gorgeous unnamed peaks rose to the north. And just to the northeast soared spectacular Castle Peak, highest in the range. It was one of those great places where you feel as though you could sit all day long and do nothing much but just enjoy being alive. 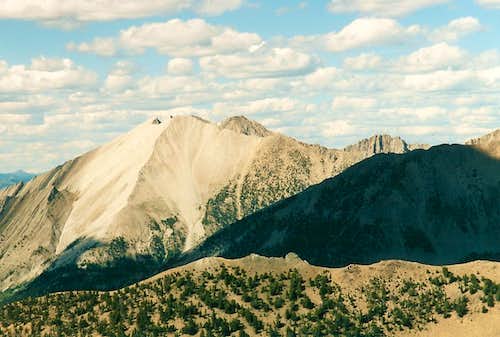 D.O. Lee Peak-- a classic example of the limestone-capped White Clouds--- from the summit

Word of warning--- the story may get a little sappy for some at this point, especially for those who are not animal lovers.

As I climbed, one peak in particular kept catching my eye as more and more of it appeared above and beyond the ridges guarding Fourth of July Lake. It had no name on my USGS quad, and so I named it Ally Peak. I have since learned that its unofficial name is Lonesome Peak, but it will stay as Ally Peak in my captions and albums and memories.

Background--- I grew up with dogs and love them, and my wife grew up with cats. When a stray cat appeared on our doorstep in December 1998, we took her in. Now we have three cats, all of them former strays or from shelters, and I have learned to love them even if I don’t understand them (allusion to A River Runs Through It intended). We would have four if a careless driver hadn’t taken Ally from us on May 17, 2002.

Ally was terrified and slated for destruction when I saw her in a dirty cage in January 2002. She was only six months old, but life had been sadly cruel for her already, and it was scheduled to end soon. For whatever reason, maybe because she was so pretty and so timid, I loved that little cat the second I saw her. We rescued her the day before she was to be “put to sleep,” one of the worst and most deceptive euphemisms anyone has ever devised.

Alcestis was a Greek queen who gave her life to spare that of her selfish husband, whose impending death had been foretold by the Fates. Hercules, a friend of the king, just happened to stop by during the mourning, and he pursued Death and wrestled him for Alcestis at the edge of the Underworld. Hercules won, and Alcestis returned home.

Ally, who had no name when we adopted her, became Alcestis, and we nicknamed her Ally to avoid having to tell the story behind the name over and over again. After a few tough weeks, Ally warmed up to her new home and became best friends with one of our other cats. But death will have its due, and the story of Alcestis is an exception to the pattern in Greek mythology and tragedy, where there are many more tales of those who try to cheat death but fail than there are of those who succeed.

So perhaps as punishment for my arrogance in naming her as I did, or as forced atonement for something senseless and cruel I did long ago and which I have tirelessly yet unsuccessfully tried to expiate ever since, Ally left us forever in one awful moment.


A Memorial and a Redemption of Sorts 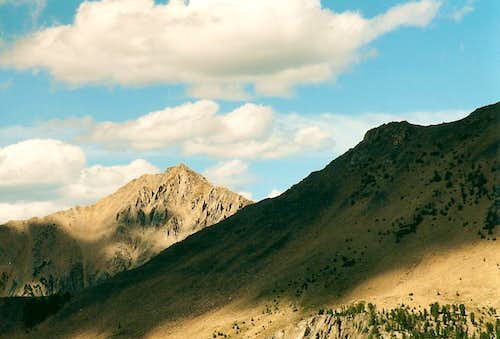 Ally Peak, my private name for Lonesome Peak (that name fits as well, in a way), coming into view
Ally was on my mind the day I climbed Fourth of July Peak because early that morning in Salmon, I found three orphaned kittens living in a shed behind a grocery store. One was badly injured, another appeared sick, and the third seemed healthy. I gave the cats some food and alerted the store staff, who said they would call an animal shelter. There was little else I could do given the circumstances, and I have little doubt that at least two of those cats did not live much longer, though the peaceful deaths they probably had were likely much better than the disease and starvation that awaited them otherwise.

But those cats were on my mind all day, and they got me to thinking of Ally and of all animals and children lost, forsaken, helpless, and alone, and I felt great sadness in spite of my awe as I sat atop the summit of Fourth of July Peak. And so I named my favorite peak out there after Ally, and I called the unnamed mountain on which I sat Salmon Cat Peak, and so they will stay in my albums and in my memories until I can read and remember no more.

Farewell, Ally, my little princess. I miss you, I think of you every day, and I am sorry we failed you. Your mountain should feel honored to bear your name. 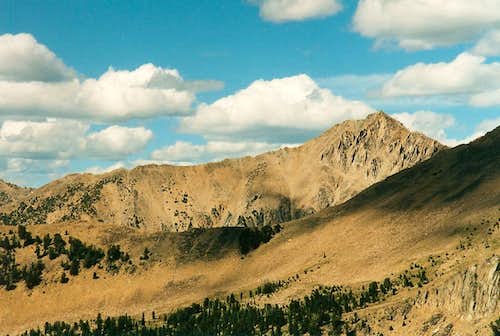 I loved your story!

And how you told it! So often we push aside those feelings about the other gentle beings who walk in and sometimes suddenly out of our lives. Thanks for sharing it with us! Kathy

Re: I loved your story!

Thank you very much, Kathy. I had to invest some emotion in writing this, and it wasn't an easy story to tell, so I'm glad it resonated with you. I truly appreciate your kind remarks.