Four Sacred Peaks of the Navajo

The traditional homeland of the Navajo Tribe is known to the Navajo as the Dinetah. The original area encompassed a large part of northwestern New Mexico, southwestern Colorado, southeastern Utah, and northeastern Arizona. Today it is confined to a much smaller area that is the Navajo Nation, the largest Indian Reservation in the United States. It is found mostly in Arizona, New Mexico and Utah.

The traditional boundaries of the Dinetah are marked by four sacred peaks. They are Blanca Peak to the east, Mount Taylor to the south, the San Francisco Peaks to the west, and Hesperus Peak to the north.

Blanca Peak or Tsisnaasjini' - Dawn or White Shell Mountain, is the Sacred Mountain of the East. It is east of Alamosa, Colorado in the Blanca Massif. 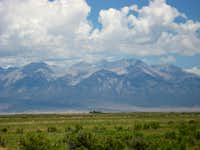 Mount Taylor or Tsoodzil - Blue Bead or Turquoise Mountain, is the Sacred Mountain of the South. It is north of Grants, New Mexico.

This is the easiest of the sacred peaks to hike. It is an easy hike and it is in a rural area that gets little visitation. Though it is a scenic peak, it is hardly very challenging. It can be done as a day hike, or a fun overnight trip with camping in the ponderosa pine along it's base.

The San Francisco Peaks or Doko'oosliid - Abalone Shell Mountain, are the Sacred Mountain of the West. They are located north of Flagstaff, Arizona. 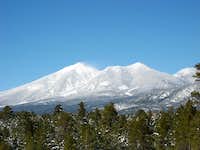 As a state high point and an escape from summer heat for many Arizonans, Humphrey's Peak as the high point of the San Francisco Peaks is heavily visited. This peak easily sees more people than any other of the sacred peaks at any time of year. Because of Arizona Snow Bowl, it is an easy winter climb and can have small crowds on it even in the depths of winter, which typically is pretty mild for 12,600 feet.

Hesperus Mountain or Dibé Nitsaa Big Mountain Sheep or Obsidian Mountain, is the Sacred Mountain of the North. It is located in the La Plata Mountains, a sub-range of the San Juans, and is north of Mancos, Colorado. 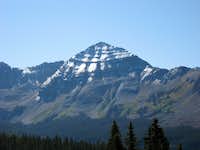 This may be the most interesting of the sacred peaks. It is a relatively easy scramble and a very scenic climb to make. Route finding may be a little tricky, especially with the loose rock above the saddle. You might not see anyone else out while climbing this. This mountain is a very loose pile of rock and you may feel that you earned this summit more than any of the other four. This may be my favorite one, or the one I most want to climb again.

There is some debate as to whether or not nearby Lavender Peak is higher than Hesperus. If it is, then Hesperus is not the high point of the La Plata Mountains. This does not seem to impact the importance of Hesperus to the Navajo, as Hesperus is the local Sacred Peak for it's prominent appearance, if not it's outright prominence.

I'm not a big fan of lists, but the Navajo's Four Sacred Peaks are something noteworthy and definitely worth climbing for their inherent value. If you summit all four you are doing something that most Navajo won't ever do. Though, this is more of a local cultural accomplishment than something that will impress climbers or non-climbers. I have personally summited all four of them.