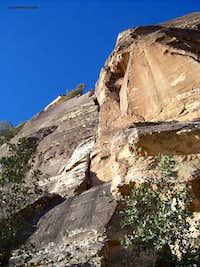 Frogland, 5.8
Frogland Buttress sits at the south entrance to Black Velvet Canyon and showcases one of the more popular 5.8 trad mixed line at Red Rocks, Frogland, 6 pitches, 770’, another Jorge and Joanne Urioste classic. A route that gets overlooked for Frogland but is probably as good if not better is the relatively new (2005) Bourbon Street at 5.8+ put in by Larry DeAngelo (“Scary Larry”). Both of the before mentioned routes take you to the summit of Whiskey Peak. As of 2008, there are only three other published routes on Frogland Buttress, all relatively short, Rain Dance, 5.10a, As the Toad Turns, 5.10d and Romance is a Heart Breakin’ Affair, 5.10a. Frogland Buttress along with Lazy Buttress, Ixtlan Buttress and Wholesome Fullback Buttress form the north face of Whiskey Peak. 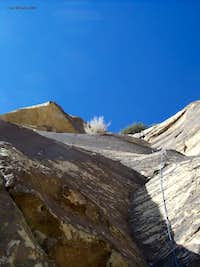 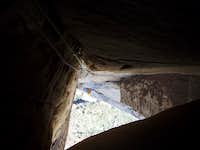 Black Velvet Canyon itself contains some of the more popular routes at Red Rocks, Epinephrine, Dream of Wild Turkeys and Prince of Darkness. The ease of approach from the parking area as well as the short approach from the canyon floor to the base of these routes add to their attraction, not to mention the rock is quite stellar. Frogland Buttress, however, involves more of an ascent up the hill before you actually enter the canyon via the wash. You park at the Black Velvet trail head which can be reached off of NV 160. During 2008, the regular Black Velvet dirt road is under construction and thus closed. To access it beyond the closed construction area, you must drive further east on 160 to the Windy Peak turn off over a cattle guard. Stay right and take the left detours whenever possible to avoid tremendous pot holes and obstacles in the road. Although a 4wd is not always essential, a high clearance vehicle is your best guarantee of not getting stuck. Continue down the Windy Peak road until you reach a turn off on the right that has been marked with a sign (2008) for Black Velvet Canyon road. Turn right and this road will dead end into the appropriate road. Turn left and follow this road to its end. From the parking area, follow the road until a trail leaves it heading for the canyon. The trail eventually splits with one fork heading down to the wash and the other heading up the hill towards the red cliff band on your left below a row of protruding buttresses. Frogland is the 2nd buttress from the left and is made quite obvious by a large roof about midway up. Once you break through the red cliff band above, hike right towards the base of the buttress. Several trails meander through brush in this area depending on what route you are looking to gain.

Although this route starts left of Frogland, it intersects it at the first belay and moves right.

Handren has it as 5.10a...RC.com at 5.10d, I believe it is somewhere between that, couple of tough 5.10 face moves, fanstastic start for what I call the Drunken Frog, combine three routes that make for a much better adventure than Frogland. Dow

Soft for the rating. A decent rap rope (2008) is set up off a tree for the last descent to the ground, but you can downclimb to the east as well. If wet, might be quicker to rap. I got that chockstone pitch and that was a blast. Pitch before that was also interesting. The rest not so much. If you are looking for a good first climb in Red Rocks, this or Olive Oil might be the ticket. Dow

Descent off of Whiskey Peak

If you ascend one of the two longer routes on Frogland Buttress that take you to the summit of Whiskey Peak, you can descend relatively easily via a col between Whiskey Peak and Black Velvet Peak.

You have two options. If you are descending back to the parking area, you can descend off of the col between Whiskey Peak and Black Velvet Peak to the left, 2nd and/or 3rd class downclimbing (refer to the Frogland route page above)....or if you are climbing further down canyon, you can descend to the right of the col.... one or two raps may be required depending on your down climbing experience. You will pass by the ever popular Dream of Wild Turkeys and Prince of Darkness and will most likely see at least one party on this section of the Black Velvet Wall.

These are all trad lines and will require an assortment of gear as spelled out in Jerry’s Handren’s “Red Rocks, A Climbers Guide”. The two long lines have bolts protecting the cruxes. The routes leading to the top of Whisky Peak allow for a quick descent from the col between Whisky Peak and Black Velvet Peak. Carrying shoes up for this descent would be worthwhile. The routes are north facing and most pitches are well protected from the sun, even somewhat chilly if spring climbing, so take a jacket.